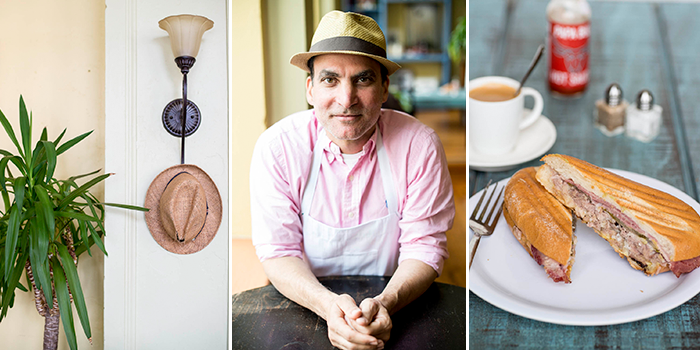 In Durham, a city of dreamers and doers, Elizabeth Turnbull, Roberto Copa Matos, and their sandwich shop, Old Havana, represent both categories. The couple met at the market in Old Havana in Cuba. Matos, who’d grown up in the Cuban countryside and attended college in Havana, was a watercolor artist at the time, selling his paintings at the market. Turnbull, who’d grown up in Haiti, was visiting on a break from Wake Forest University. They hit it off, and he asked her out for mango juice. When Turnbull went back to the States, they kept in touch through letters until Matos decided, at age 30, to seek political asylum in America.

They got married and eventually made their way to the Triangle area. One day, over lunch, they got to talking about how there was no good Cuban street food in the area, and started imagining what they could do with a sandwich and coffee shop. It started as a joke, but friends and family took them seriously. “You have to do this,” they told the couple.

Things kept falling into place: They fell in love with the tall, arched windows — just like the ones on buildings in Havana — of a 1928 building that had once housed The Durham Sun. Because they didn’t have experience running a restaurant, they arranged for some relatives of Matos’s to handle day-to-day operations.

At the last minute, the relatives pulled out. And so, Turnbull says, “We rolled up our sleeves and got to work.” They’d created some buzz around their new restaurant, which meant their soft launch “wasn’t so soft.”

“In New York City,” Turnbull says, “it would have been a disaster. But in a town like Durham, it was a great place to have a learning curve.” The service was always friendly, but it was inefficient at first, she says, until Matos, whose background is in biochemistry, started running the kitchen like a lab. “It’s a simple thing, a sandwich,” Turnbull says, “but Roberto takes everything he does really seriously.”

When Old Havana opened, Turnbull and Matos were eager to prove to Durham that they knew how to do traditional Cuban food the right way, and in Communist Cuba, ingredients (mostly chicken, pork, rice, and beans, because beef is rationed by the government) and seasonings (onions, green peppers, garlic, vinegar) are limited.

But while doing research, Matos came across a cookbook, the New Manual of Cuban and Spanish Cuisine, that changed his understanding of what Cuban cooking could be. Published in 1857, when Havana was still a thriving port city, the book paints a portrait of a cultural crossroads. “It gave us the freedom to play with different spices not used in Cuba today,” Matos says.

The menu, which started with only three or four sandwiches, bloomed to 10 sandwiches, including the El Caney, which combines two traditions common in Cuban cuisine — pork and bread, and pork and avocado — plus cheese.

Still, Matos says, “We’re careful to follow tradition, and tradition is simple: Cook at a low temperature for a very long time. It makes sense in an underdeveloped country, to have simple but good ingredients, and comforting ones. To me, there is nothing like sitting down for lunch and eating a cup of just-made white rice and black beans. I feel so satisfied after that.”

Besides making good food, Turnbull and Matos have three goals: to welcome visitors to their sunny space to share Cuban culture through music and dancing events; to be part of a sustainable local economy (the restaurant, they say, is just Phase One of a plan that involves starting a small farm); and to be a safe place for people of all walks of life to enjoy each others’ company. “It’s a great joy to see the room full of diverse people,” Matos says. “That’s one of the strengths Cuba had in the past, and one of the strengths that our area has in the present.”