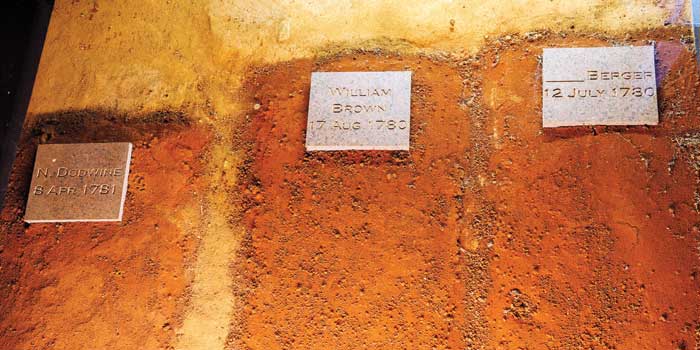 Editor’s Note: This story was originally published in October 2012.

The names of the dead stretch for 12 feet across the dusty, red, granite slab. They are etched in black, in a typeface reminiscent of stencils. The descriptions are simple. There are 131, one for each grave. “In memory of 131 lives,” the stone says.

All of the people identified on this slab at St. Philips Moravian Church in Old Salem have something written about them, something simple that cements them in history as characters:

The descriptions are poetic at times: “SEEKS FOR THE GOOD WITH TEARS,” “SUFFER LITTLE CHILDREN.” They can be straightforward and just plain fact: “INFANT,” “YOUNG MAN.”

Cheryl Harry and Kym Maddocks, the two women who work most closely with the church and graves, have a favorite: Timothy, who died in 1838 and was “BORN IN AFRICA.” He was more than 100 when he died, and as long as he lived here, he didn’t speak English or German; he spoke primarily in his native tongue. The two women like him because of his connection to Africa. His descendants still live in North Carolina, some in Winston-Salem.

And that’s why they’ve preserved these graves and this church, Harry says: “There is no story of Old Salem without St. Philips Church and these graves.”

A story of real people

From the beginning of Salem, the Moravians were buried in their cemetery, God’s Acre, on Church Street. But law required them to have a graveyard for anyone who died in Salem, and they made another cemetery about a quarter of a mile up the road. They called this “the graveyard for strangers.” Soldiers, slaves, free men, and doctors’ patients who didn’t make it lie here in rest.

By the early 1800s, the Moravians segregated the cemeteries. They began burying the white strangers next to God’s Acre, and “the strangers graveyard” became “Negro God’s Acre” — a burial ground for all people of color. In 1861, the Moravians built a new church for the black congregation along the fence line of the graveyard. No one knows why, but in 1890, they built on to the church, adding a room right over the graves.

In 1952, the congregation abandoned the church and moved to a building on Happy Hill, a neighborhood a couple of miles away. They used St. Philips to store furniture, but soon, the church was in shambles. The windows broke. The roof leaked. The foundation cracked. There was no sign of the graves.

In the early ’90s, the leaders of Old Salem, Inc. decided to restore the church and find the graves. In 1994, a construction crew pulled up the hallway floor and found 19 gravestones. When they pulled away the church steps, they found 12 more stones. John Larson, the vice president for restoration, dug through church records. There were at least 131 people buried on the property, 14 beneath where he stood in the church. But the years of ice cream socials and reunions held on the grounds had erased any sign of where the graves might have been. He brought in an archaeologist. “This was all part of bringing back the human into the place,” Larson says.

Maddocks, now the manager of research and operations, went to work. She oversaw a team that excavated the lawn in plots, measuring 5 feet by 5 feet. The archaeologists never went below a foot, and from the pieces of stone and fragments they found, they made a map of graves. By size, they labeled the graves adult or child. From church records, they calculated where people were buried, and some of the new stones have names.

“That we know these little details about everyone speaks to the fact that they had a life here,” Maddocks says, pointing to the etchings in the 12-foot granite slab. “By knowing the names and things about them, it’s somehow more tangible. These are things people connect with. There’s a story here of real people.”

In St. Philips Church, part of the floor is glass. When you lean over the wooden railing protecting that glass, you see three raised mounds of reddish dirt. These are graves.

During the American Revolution, Moravians refused to fight for either side. But both armies passed through Salem and sometimes left behind provisions and sick soldiers.

Berger, a day laborer and former soldier for the British, was buried in the graveyard on July 13, 1780. A captain for the Continental Army left a sick soldier, William Brown, at the tavern. He died a week later and was buried on August 19, 1780. N. Dodwine’s commanders sent him to Salem half-dead on April 7, 1781. He died the next morning.

On the wall beside the glass, you read their stories.

And outside, you see their names carved in the granite, forever engraved in our memories.

Sarah Perry is an associate editor at Our State. Find more of her archived stories here.