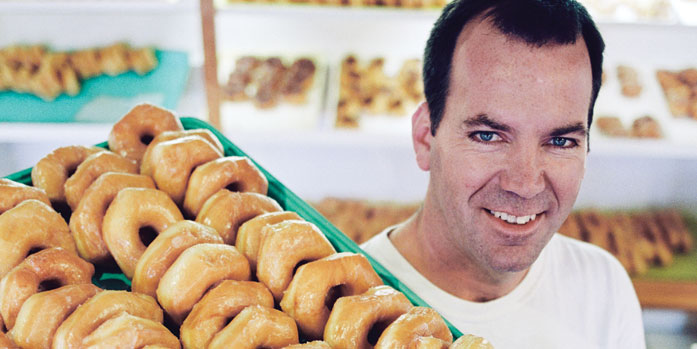 At 5:30 a.m., the doors are open, and the doughnuts are already hot. “This is still the best country in the world. You can take an idea and make it work,” says Derek Spencer, who is up at 3 a.m. Tuesday through Saturday to make sure there will be doughnuts. He and his wife, Beth, own Paul’s Pastry Shop, situated in a former Hardee’s that’s just a two-minute walk from the original, much smaller location that had no seating and opened more than 60 years ago. In November 2010, the couple moved Paul’s into the roomy, fast-food restaurant space with a drive-through window, and booths and tables for dining. Cinnamon fritters, brownies, cheese rings, and tea biscuits also fill the cases, but the trays of the 75-cent, still-warm, glazed doughnuts are the best sellers, drawing customers from Greensboro, Durham, Chapel Hill, and beyond. Spencer, who’s also a letter carrier in the afternoons, knows well the sweet, yeasty recipes and the doughnuts’ appeal. “Lots of times, I’ll take a box of hot, glazed doughnuts with me to the post office to share,” he says.