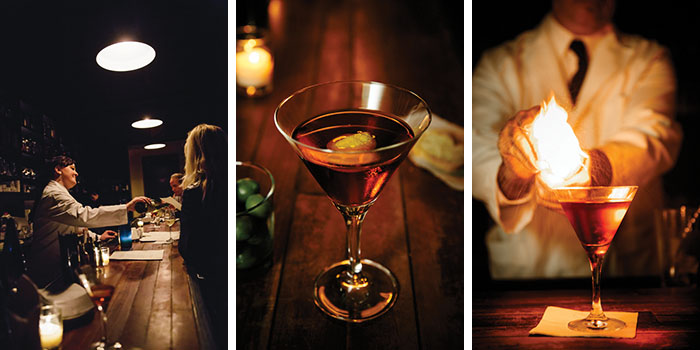 Peccadillo, a barroom located at 100A Brewer Lane in Carrboro, is not at 100A Brewer Lane — or maybe it is. I mean, it’s supposed to be here — according to Yelp and my sister-in-law — but I don’t see it. There’s the Carolina Car Wash on the corner, plain as day, which means the bar should be to our right, behind it. But to our right there’s nothing but a blank concrete wall and, a few yards farther on, an unmarked metal door with absolutely no signage whatsoever. It looks like the door that might take you into the bowels of the car wash, where the soap is kept in huge, toxic containers.

But it’s 8 o’clock at night, and the door is open, just a crack.

We watch for a couple of minutes, car idling, as if on a stakeout, until the door opens, and out walks a couple, two well-dressed professionals who may have come straight from their law office. Then someone else pushes through, a shaggy guy on the younger side, probably on his way to band practice.

This must be the place. Peccadillo: the best bar in town you’ve never been to, because you couldn’t find it.

Curiously, Tim Neill — owner, creator, and architect of the only speakeasy I know of in these parts — never intended it to be this way. Tim comes to Carrboro from Australia, via New York City, via Charleston, South Carolina, and then via Chapel Hill, as if he’s been trying to sneak up on us under the cover of night and surreptitiously insert a bar into our midst. Which is kind of what he did.

It does seem counterintuitive: a retail establishment that your clientele can’t find. But it’s not what he intended. All evidence to the contrary, he wants us here. The more the merrier, in fact.

The experience he’s trying to create with Peccadillo is that feeling of going from one world to another — walking through a gray metal door in a white concrete wall into a velvet-curtained antechamber furnished with a Victorian table and a sign-in book (it’s a private club, sure, but not that private), and then into the gently lit, thickly shadowed, elegantly simple bar. No television. No artwork. Just the bar and the liquor-lined mirrored wall behind it, stools, and one long table you might find in a mead hall in Scandinavia.

The experience he’s trying to create is a magical one. And he succeeds.

It’s like entering another world. The bartenders wear bow ties, which might seem a little pretentious, but, like medals, they’ve earned them: These folks know their stuff. They’re more than bartenders, really; they’re mixologists. They don’t just make you a drink; they devise a concoction, a taste extravaganza that will show your mouth a whole new way of life. When Peccadillo opened in 2011, the menu offered three drinks: a Negroni, a Manhattan, and a martini. They could make other things, of course, but these were their calling cards in the spiritual world (the world of spirits, that is).

Simplicity inspires perfection. Take the Negroni, for instance, a drink I’ve been researching for years: Peccadillo’s version may be the best I’ve ever had, and not just because the rim is moistened by an orange peel and set aflame. Although that part is awesome, too.

There’s a bit of good food here, as well — cheese, olives, bread, charcuterie (lamb salami, anyone?) — and wine and beer and chocolate. This is where you want to be in a snowstorm, fingers crossed that the roads will become impassable, that you might be stuck here for days.

So here’s the problem: You will love this place. If you don’t love it, you and I can go back there together, and I’ll buy you as many Negronis as it takes until you do. But part of me doesn’t want you to go there. A part of me doesn’t want you to know about Peccadillo at all. Peccadillo was not meant to be a secret, but the people who go there treat it as if it were: They don’t tell their friends about it because they want it all to themselves. “That was a bit of a blind spot,” Tim says.

From what was the back room of a car wash, and a former punk dive bar, Tim Neill has created a space that feels so intimate and warm and comfortable that the patrons who love it would rather not share it, even with their friends. And I feel as if I’ve broken an unspoken vow of silence by writing this piece. But go ahead, check it out. You know where it is now. Sort of.

Daniel Wallace is a novelist and the director of the creative writing program at the University of North Carolina at Chapel Hill. Find his archived stories here.

Editor’s note: This story originally appeared as “Peccadillo” in the January 2015 issue.