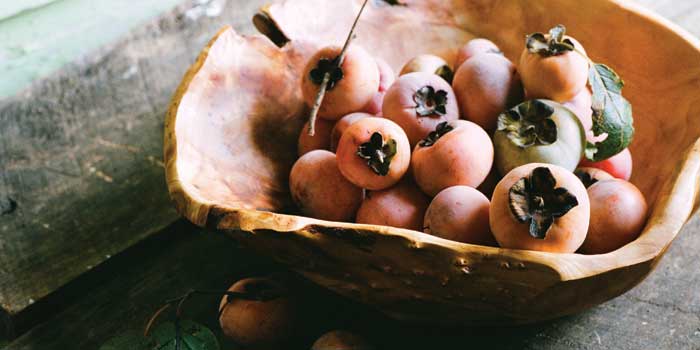 The persimmon is an outcast.

Wild persimmon trees ostracize themselves on the edges of forests, fields, and pastures. They stick together, growing in clumps. They need each other.

The dingy, orange-brown fruit doesn’t shine under the fluorescent lights on grocery store aisles. Too many seeds, the fruit people say. Too perishable.

The persimmon is fleeting. Beginning as early as Labor Day, the round globes the size of cherry tomatoes lose their grip on the spindly, sagging limbs. They tumble down to the ground, suffering a bruise or two. Leaves and grass stick to the sweet nectar that often leaks out. Deer and cows come to munch; ants swarm the leftovers. The vulnerable persimmon won’t last long.

But a lucky few land on something soft and clean, fresh straw or maybe a tarp, placed there by someone who cares about this misfit fruit.

“Once they hit the ground, they last about two days, and that’s it,” Gene Stafford says. He sees value in these fallen fruits. And he wants others to see it, too.

Stafford lives in a disappearing community. He grew up in Colfax on a farm that’s been in his family for more than a century. He still owns 17 acres of the place, where the farmhouse, barn, sheds, and persimmon trees still stand. But the road sign on North Bunker Hill Road just before you turn onto Stafford’s property no longer says Colfax. Instead, it welcomes travelers to Oak Ridge.

But Stafford refuses to succumb to the encroaching suburbia of Oak Ridge on one side and Kernersville on the other. He’s determined to hang on to the edges of the forests, fields, and pastures of his youth. Those rural places are disappearing fast, displacing the people who call them home. Progress, the economists say. Investment in the future.

Stafford’s great-grandfather once owned 530 acres in Colfax, stretching from Reedy Fork Creek to Beaver Creek and from the Old Mill of Guilford back to the farm. But now Colfax natives like Stafford don’t fit in anymore. They have to stick together; they need each other.

Three years ago, Stafford started the Colfax Persimmon Festival on his family’s farm. It’s a festival devoted to heritage and preservation. He had restored the 200-year-old barn and wanted to show it off. So he invited friends and neighbors to help him celebrate.

“A buddy of mine said he would cook some ribs,” Stafford says. Others contributed pinto beans, Brunswick stew, cornbread, and ham biscuits — heritage food, Stafford calls it.

For dessert, Stafford turned to another family tradition — persimmon pudding. During September and October, he gathers persimmons from the trees behind the barn and on the land of other community members who don’t know what to do with the fallen fruit or don’t care to take the time. They call Stafford because he has the patience.

Processing persimmons is tedious work. Stafford washes each one. He removes the caps shaped just like dogwood blossoms. And he pinches off the tiny stem, the size of a pencil tip, that dangles from the bottom. He then places the persimmons in a colander, an inverted metal cone covered with small holes, and squishes out the burnt-orange pulp with a wooden dasher. It’s the only way to do it, he says. Some people try to rush through, filling the colander with too many persimmons and using too much force, grinding on the seeds and skins. They wind up with black specks dotting the pulp. You can’t hurry the process.

Stafford relies on a family recipe from his 96-year-old aunt Anna Lee, who still makes a fine pudding herself.

Recipes for persimmon pudding vary widely. Some ingredient lists are as simple as butter, milk, sugar, flour, and eggs, reflecting the staples common on family farms decades ago. Others embellish their puddings with sweet potatoes, coconut, cinnamon, or pecans.

But for people like Stafford who remember picking up persimmons on fall afternoons as a child, nothing beats the simple, pure taste of the persimmon. It’s similar in texture to a cooked sweet potato, smooth and thick. It has a mild, sweet taste with natural hints of cinnamon. And an equally peculiar smell — it’s cinnamony, too, but not overpowering like the fancy candles.

Stafford’s friends Jimmy and Joanne Morgan stir their pulp into cookies. At last year’s festival, they sold 1,500 persimmon cookies to a crowd of about 1,000 people.

“I remember going out as a kid and helping my mom and aunt pick up some,” Jimmy Morgan says. “They just got what they needed. People either used them, or they didn’t. It was normal, everyday life. Now it’s evolved into a delicacy.”

It’s a trend that happens a lot with nostalgic foods. People don’t realize how important they are until they can’t get them anymore.

The Morgans freeze several hundred packs of persimmon pulp every fall. On Wednesdays and Saturdays throughout the year, they set up at the farmers market in Kernersville where they sell persimmon cookies and frozen pulp off the tailgate of their Dodge pickup. Seven dollars for two cups, just enough to make a pudding. Joanne Morgan tells unfamiliar customers that the taste is similar to gingerbread.

Eighty-two-year-old Flaxie Bennett laughs as she sits on her Chevy tailgate next to the Morgans. It’s hard for her to understand how people don’t know anything about ’simmons, she says. Her mama taught her everything she needed to know about the fruit when she was a child.

“If you get ’em too green, they’ll pucker your mouth,” she says. “Nothing’s ever tasted like a ’simmon.”

It’s true. The persimmon is hard to explain to people who’ve never seen one, let alone smelled or tasted it. And it’s even harder to convince someone of its value if he makes the mistake of tasting a green one.

You can’t pick a persimmon from a tree like an apple. You have to wait until it falls. The persimmons on the tree are hard and bright green, and the tannins in the fruit cause them to taste bitter.

Ten years ago, Morris set out to find the sweetest possible variety of persimmon. On less than an acre at his home in Winston-Salem, he began planting different varieties of American persimmons or Diospyros virginiana. He added one or two every year and now has 12. Like Stafford, he understands their value.

“Here we have these great fruits, and yet we import mangos,” Morris says. He envisions a day when persimmons have a place in supermarket produce sections.

Few insects bother persimmons, Morris says, so they’re a natural fit for the organic-food movement. Persimmons are geographically versatile — native in all 100 counties in North Carolina and in states down the East Coast from New York to Florida. Oriental persimmons, a larger fruit native to Asia and the national fruit of Japan, now thrive in California, but they lack the depth of flavor found in American persimmons, Morris says. He knows native persimmons could gain prominence in American kitchens — if only the temperamental fruit would cooperate.

But the persimmon resists commercialization.

Each fruit contains two to six seeds, a little bigger than those found in a watermelon, which makes it unappealing to consumers spoiled by seedless grapes. The pulp could be sold, but the old-timey process for extracting it doesn’t convert well into an assembly line for mass production.

Planting a stand of persimmons is also difficult. If you start a persimmon tree from a seed, there’s no guarantee that the tree will be profitable. Each tree has a different personality, even trees of the same variety. Some are sweet; some are bitter. And it takes a long time to find out which kind you have — a persimmon tree waits six or seven years before it produces fruit.

And if you have one tree, you must have another. Female persimmon trees produce the fruit, and males produce the blooms for pollination. They have to stick together.

“Persimmons have a long taproot, so they’re tricky to transplant,” Morris says. “If you break the root off, 9 out of 10 won’t make it.”

The persimmon doesn’t like change. Just like Gene Stafford and the people of Colfax, it feels the squeeze as its fields, forests, and pastures disappear.

But the persimmon refuses to be constrained to an orchard.

It prefers to be wild, to grow where it wants, to fall when it wants. And just maybe, someone who cares will pick it up.

Mix together flour, sugar, and spices. Vary spice amounts according to personal taste. Stir in persimmon pulp, eggs, milk, melted butter, and vanilla. Bake in oven at 325° for about 1 hour.