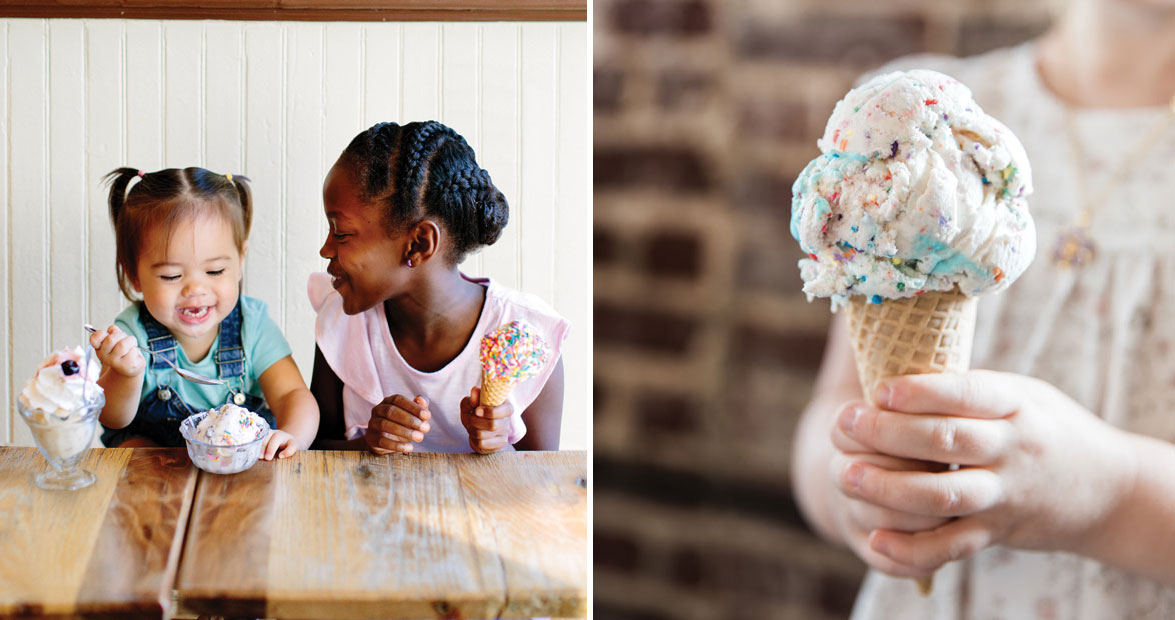 In Iredell County, nearly everybody knows the story of their local ice cream. In 1924, B.A. Troutman and R.C. Millsaps opened a downtown Mooresville creamery that, today, churns out two statewide brands, DeLuxe and Front Porch, both of which are served at an old-school parlor attached to the factory.

The two stores are linked by more than just ice cream: After nearly a century in business, Mooresville Ice Cream Co. is devoting a new chapter in its history to fund-raising for local schools, churches, sports teams, and fire and police departments — reaffirming its long-standing place in the community. 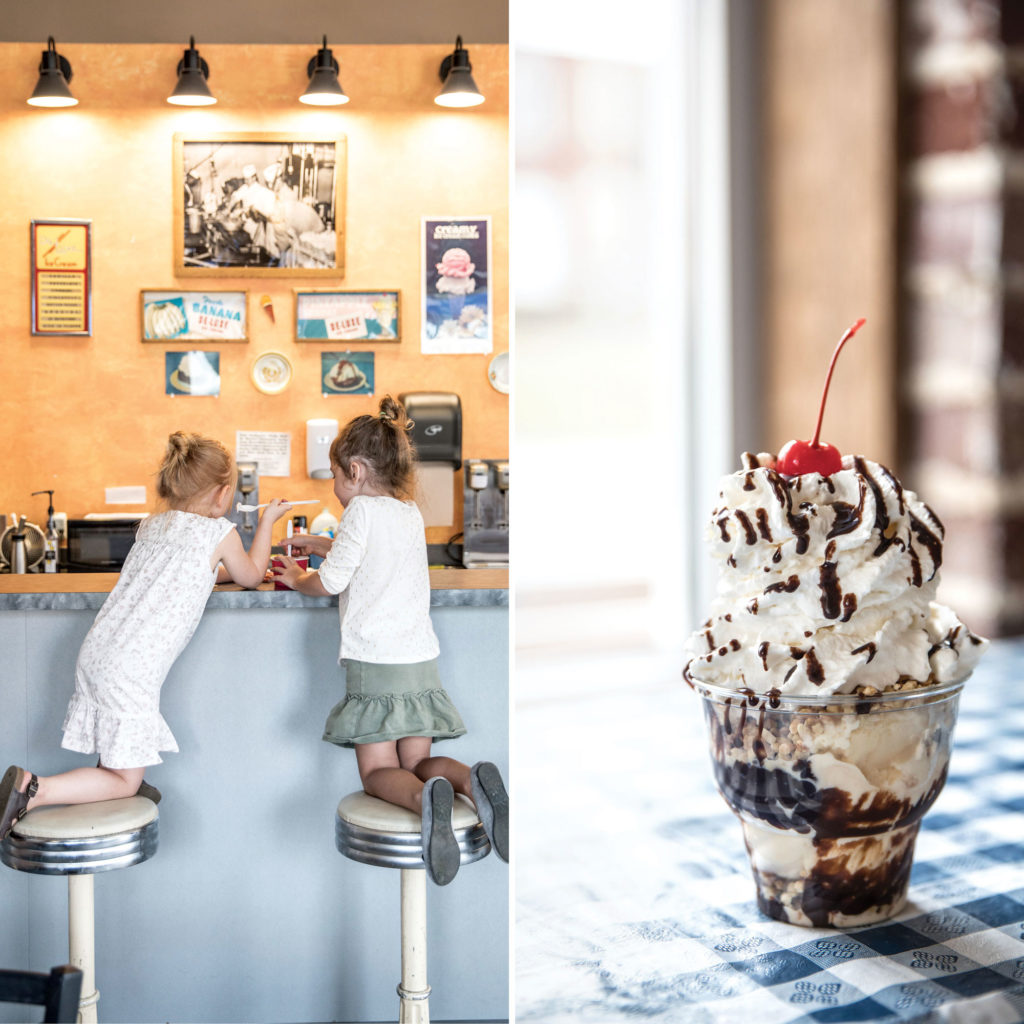 Louis Coletta’s family has been in the ice cream business since 1915, when his granddad Carmine Coletta began traveling around Gastonia with a pushcart, and later a horse-drawn wagon. He’d ring a bell to let customers know he was coming, at baseball games and church camps, at the Firestone Mill every day at shift change, and throughout the mill village. Whether or not residents had money to pay, they knew they could bring out a bowl and Carmine would fill it with ice cream.

What he was doing, Louis says now, was building goodwill with the people of Gaston County, the ancestors of the customers who now fill Tony’s — named for Louis’s uncle — each day. They come for hot dogs and sweet tea, but especially for the ice cream made by Louis’s grandsons next door: Classic flavors like a smooth, milky Southern chocolate. Local favorites like black walnut, Sun Drop, and Cheerwine. And one flavor that often takes newcomers by surprise — grape, a nod to the Colettas’ Italian heritage, and to the most important part of their business: family. 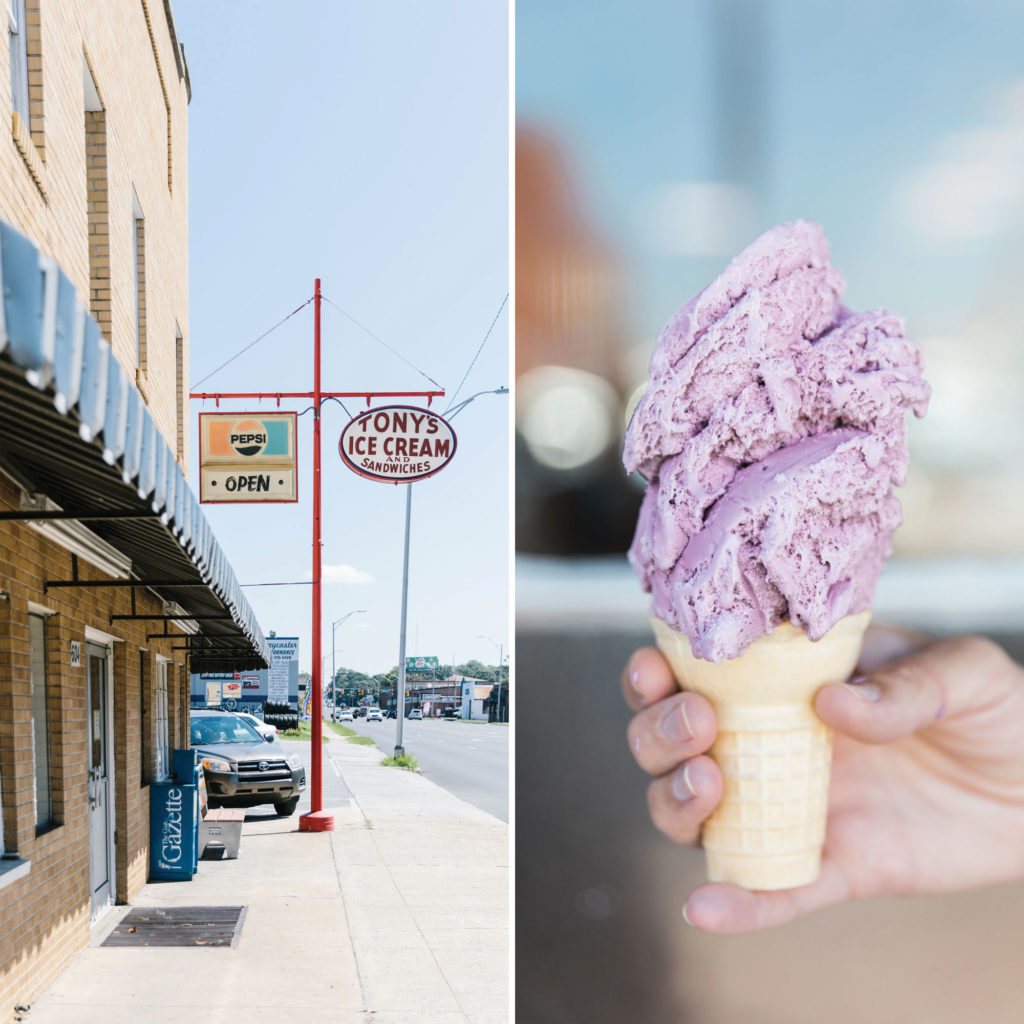 Most days, there are visitors touring the acres of farmland around Simply Natural Creamery, petting Jersey calves, visiting the “big mamas” in the lounging barn, milking Miss Maggie, a simulated cow, and relaxing with a scoop on the creamery’s wide front porch.

Brothers David and Neil Moye had been farming row crops for years when they purchased a pair of calves to teach their children to raise and care for livestock. The family soon realized that rich, nutritious Jersey milk is something special, and they wanted to share it with their neighbors.

Now, loyal customers seek out Simply Natural products in eastern North Carolina groceries and at a new ice cream parlor in Greenville. But the Moyes hope they’ll visit the farm, too — to see where their milk comes from, and to develop a connection to the land. 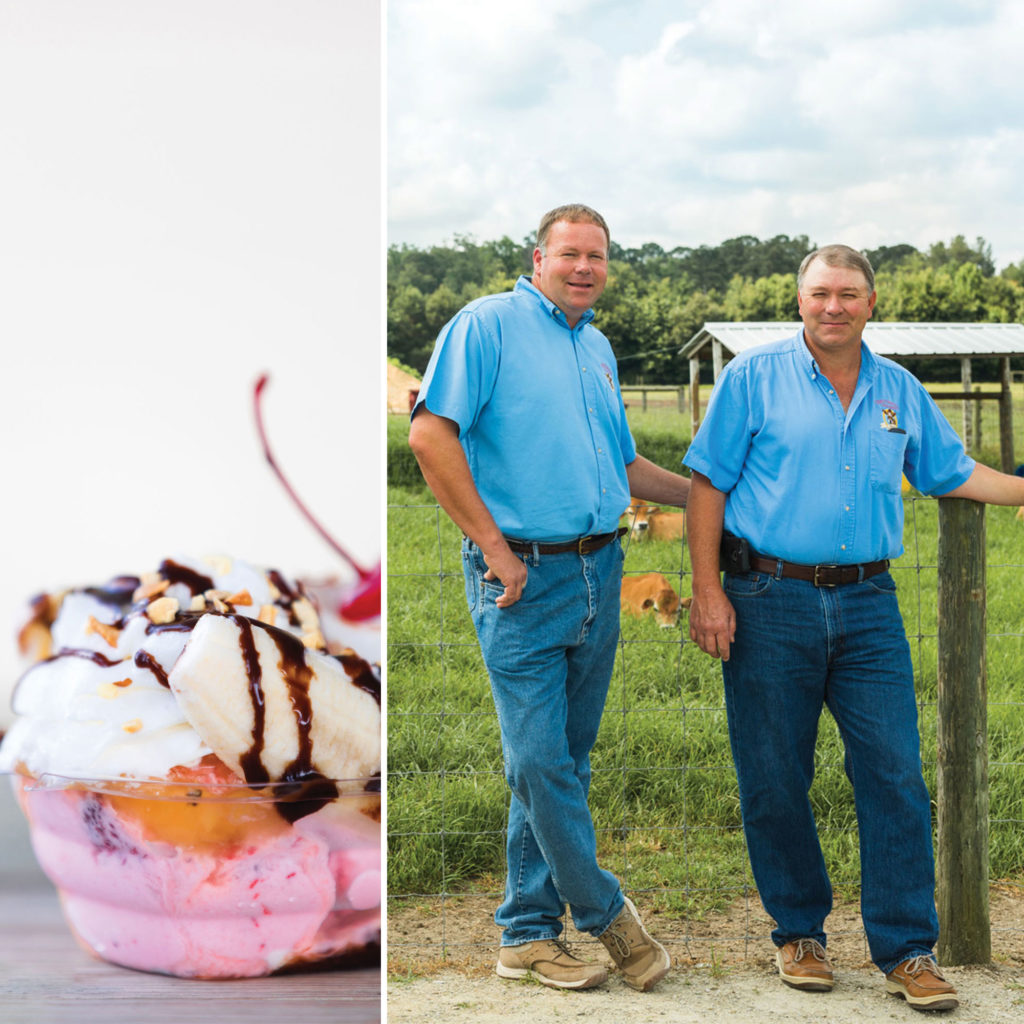 By the time Vanessa and Yoni Mazuz opened their happy, pink-walled shop downtown in 2013, their ice cream already had a loyal following in Durham. In the two years prior, locals had learned to look for The Parlour’s little white school bus because it held the promise of Vanessa’s creations — luscious, inventive flavors like honey lavender, sweet corn, and salted butter caramel, and always a few vegan options.

Vanessa has been experimenting in the kitchen since she was a child; she turned her attention to ice cream after the couple moved to Durham from Philadelphia, a city with a long history of high-quality, handmade ice cream. She loves to use local ingredients, but only when they’re in-season — so flavors like strawberry, blueberry buttermilk, and blackberry make brief but joyful appearances in the spring and summer, when the berries are at their best. 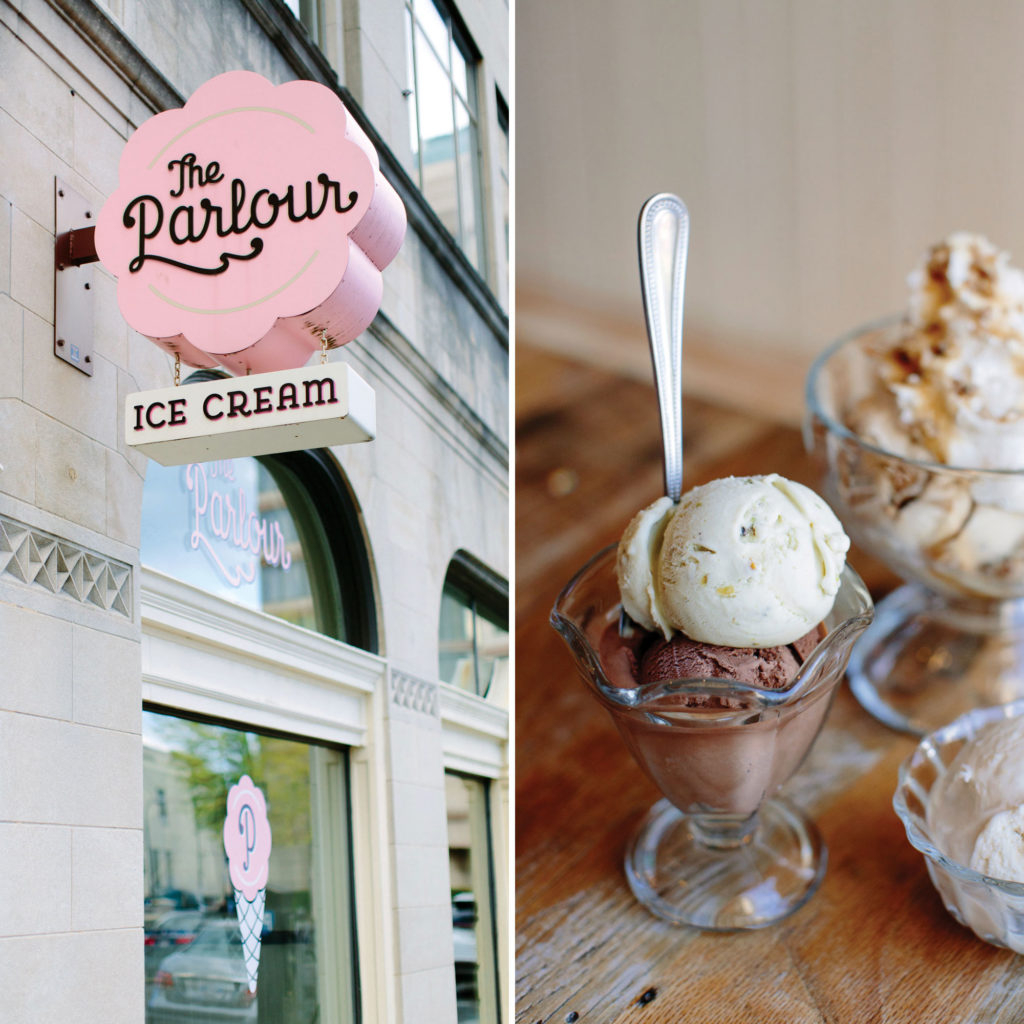 When Jim Burgin’s grandfather J.G. opened Burgin’s Dari-Creme in 1954, he didn’t have access to bulk ice cream. But he did have a soft-serve machine. So he’d hand-mix toppings into buckets of soft ice cream, then freeze his creations overnight to make different flavors. Jim’s parents continued the tradition when they opened Jack Frost Dairy Bar in 1971, and now, Jim and his wife, Connie, do the same.

The process is time-consuming, but customers can tell they’re tasting a treat from what the Burgins call “the golden age of ice cream” — especially when they order the popular butter pecan, generously studded with chopped and halved pecans.

The Burgins often volunteer at the local elementary school, and Jim doesn’t mind a bit when young students call him “Jack” or “Mr. Frost.” As the third-generation steward of this McDowell County icon, he’s earned the title. 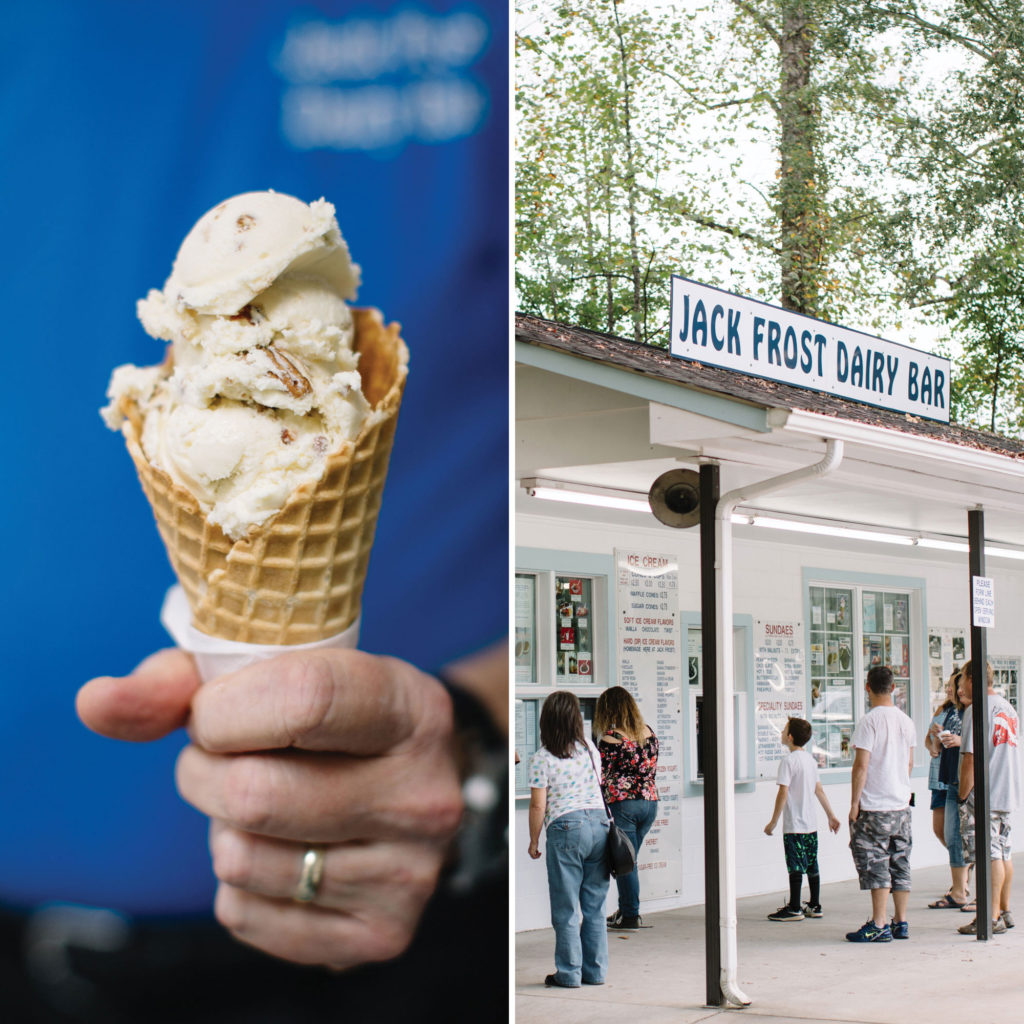 As the sun arcs over Bowman family farmland in southeastern Guilford County, small groups of Holstein and Jersey cows laze in the shade. On the other side of the pasture fence, parents and children follow suit, settling in to enjoy Homeland Creamery ice cream under the leafy branches of a century-old willow oak.

The Bowmans had already been farming this land for generations when Roy Bowman bought a handful of dairy cows in the 1930s. Over the next 60 years, the herd grew steadily, and in the late ’90s, Roy’s grandsons Chris and David built their own creamery, where they vat-pasteurize their milk — cooking it low and slow to retain flavor and health benefits.

The Bowmans are passionate about helping their customers learn how Homeland milk is made, and about caring for their herd as part of the family — because the best ice cream starts with happy cows. 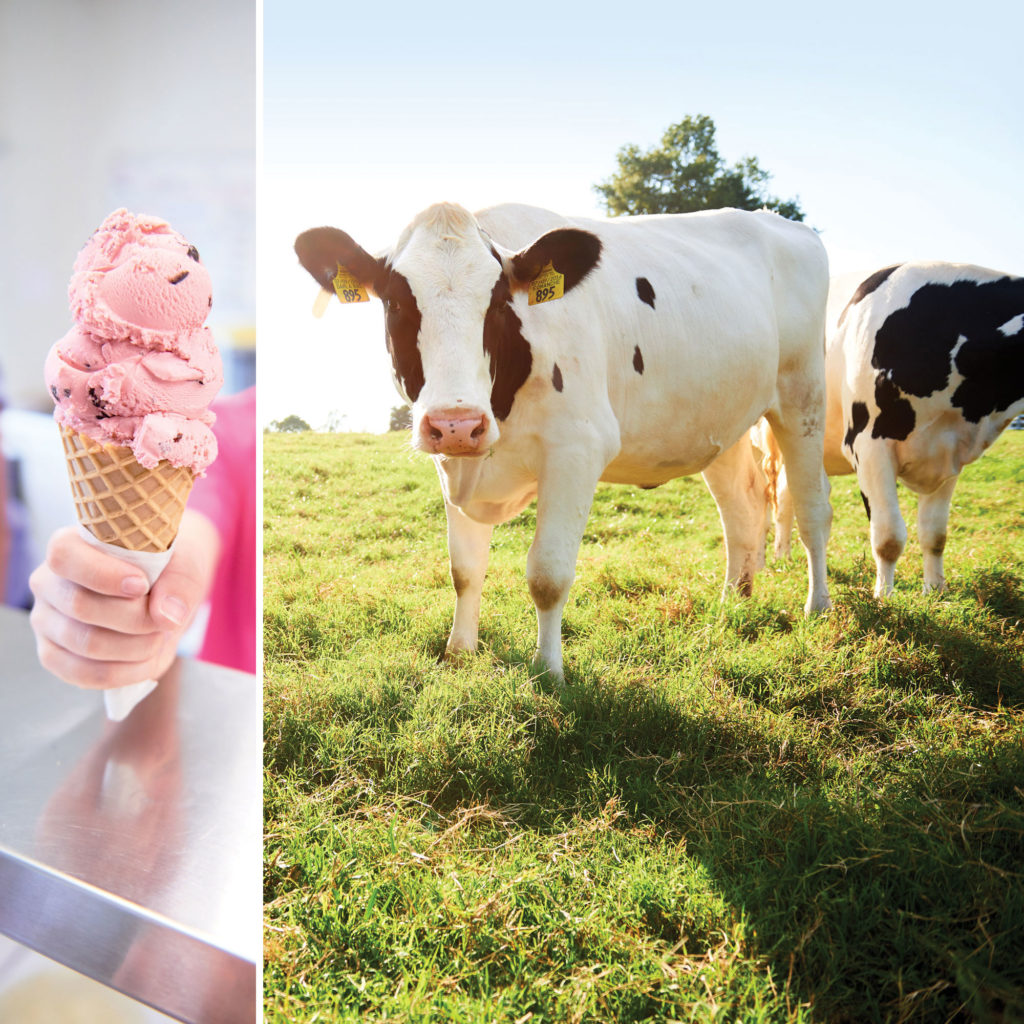