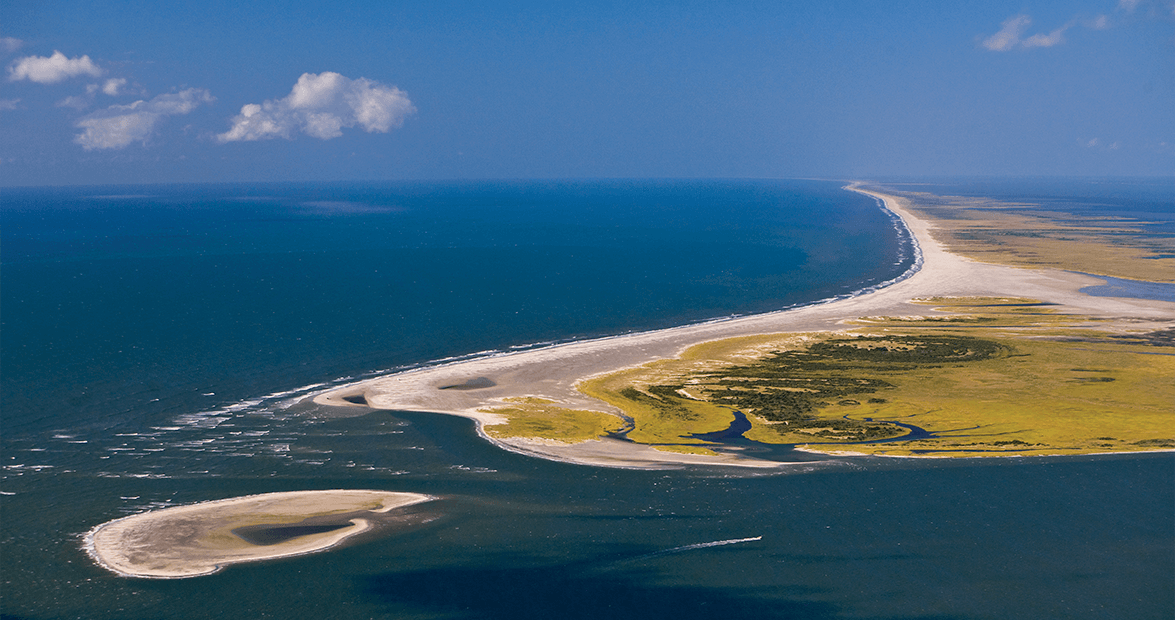 Rising from the Pamlico Sound south of Ocracoke, on the watery, windy edge of the state, Portsmouth Island is one of the last few wild, uninhabited islands along the North Carolina coast. Out here, beyond bridges, beyond telephone poles and power lines, in the sticky, salty ocean air, lies a barrier island as it is meant to be — vast stretches of smooth, white beach with natural dunes; salt marshes of swishing spartina and needlerush; plains of grasses cut by winding, blue creeks; hummocks of wax myrtles and scrappy, salt-stunted cedars and live oaks; sand flats that alternate between drenched and desert dry.

Twenty-two miles long and never more than a mile wide, Portsmouth is three miles across the sound from Down East Carteret County. Together with South Core Banks, home of Cape Lookout, and Shackleford Banks, the island is forever protected from development as part of the Cape Lookout National Seashore.

The National Park Service formed the seashore in 1976 to create a place where nature takes priority, a place where pelicans outnumber people, where sea turtles nest without the distraction of artificial light, where the island migrates in its own way, in its own time.

This isolation is easy to maintain, as Portsmouth is not easy to reach. The gateway points to the island — Ocracoke Island on the Outer Banks, or Atlantic to the southwest — are also remote, a long drive or ferry ride away from the beaten path. From these places, Portsmouth is accessible only by boat, always an unpredictable means of travel. Winds whip up without warning, and the weather rarely lines up with plans; you’re at the mercy of the elements.

You either learn the route yourself in your own boat and risk running aground a few times, or you ride with someone who knows how to get there. About 90 percent of Portsmouth’s visitors come from Ocracoke, and one of Ocracoke’s top guides is Rudy Austin, who’s been going to Portsmouth all his life. You don’t book this trip on the internet; you call on the telephone to Austin’s house and leave a message with his wife if he’s out.

From Atlantic, you take a small ferry from the Morris Marina. It’s about an hour-long trip, ending up on the island’s south end where the park service maintains a few primitive cabins on the beach. You can ferry a four-wheel drive over from Atlantic, and plenty of people do, driving the island in search of fish, stopping to camp wherever they feel like it. 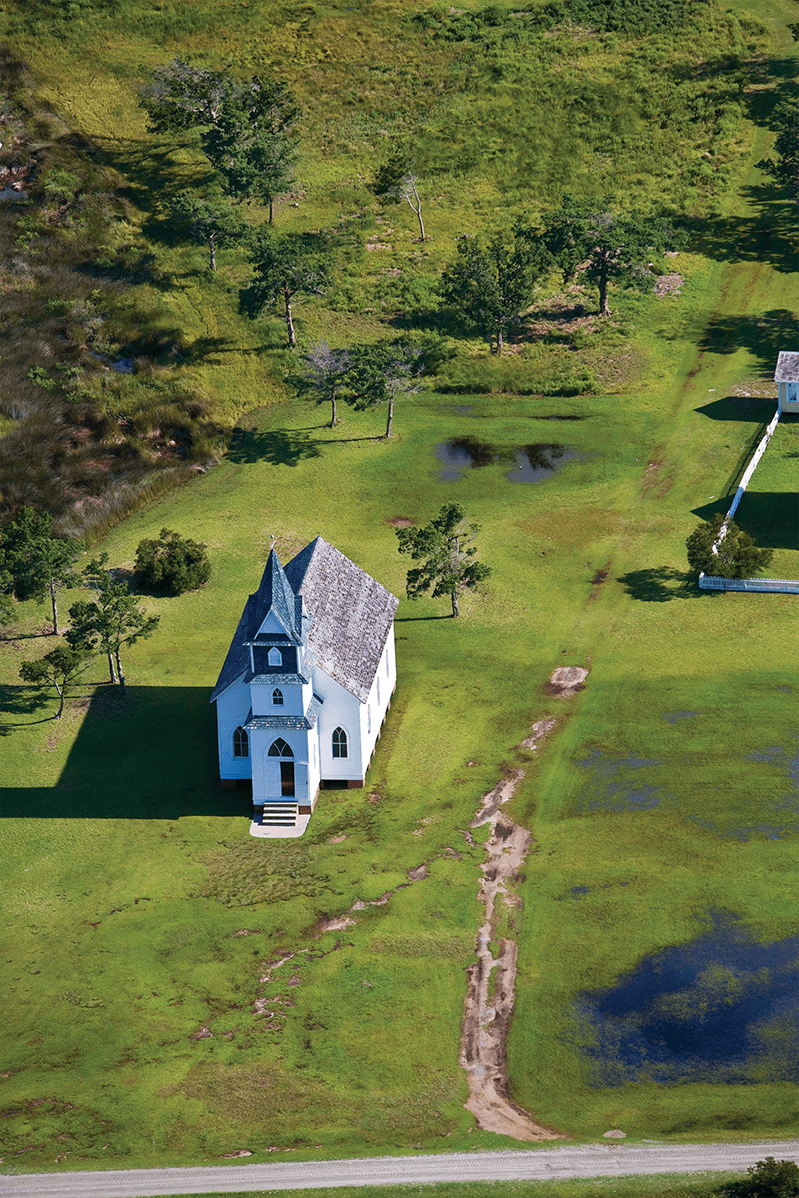 Far from the developed world, Portsmouth lacks even the most basic comforts. There is no fresh water to drink, nothing to buy, no one to warn you of dangerous currents in the Atlantic, no one to pull your SUV out of the sand trenches if you get stuck. Conditions are harsh: unbroken winds, powerful waves, little shade, few escapes from the island’s infamous mosquitoes and biting flies.

But on busy days, there are fewer than 30 people on all 22 miles of the island, and it is possible to find your own wave to surf, slough to fish, beach to walk. The beach is littered with spills from the sea — whelks, cockles, pen shells, Scotch bonnets, sand dollars. The sound channels, the ocean surf, the inlet depths teem with fish. At night, there are fewer people still, and the dark is solid black, pierced with the most stars you’ve ever seen.

Out here, devoid of most human noise, there is the mind-clearing quiet of nature, and the small sounds of the island are stark and healing: the squeaky flap of a cormorant’s wings overhead, the sizzle of sea foam over broken shells in a backwashing wave, the clicking of sand-fiddler claws as they scuffle in the mud, the splash of a jumping mullet breaking flat water.

There’s an unexpected clearing on the marshy edges on the north end of the island — the other side of Portsmouth, the kept side. First a steeple peaks above the trees, then a windowed lookout cupola. Coming up closer, it’s an eerie sight: a tidy village on an uninhabited island, no signs of life except for the well-kept buildings. The white church, standing alone on its patch of balding grass, is a sign of despair in its loneliness and hope in its freshly painted presence.

Here are memories of a former life: cottages with warbled windows and picket fences; the simple, wooden schoolhouse with its fold-up desks inside and cistern out back; the post office with its polished, metal boxes and big bell in the window; the general store with its cans and bottles and old ledger; the Salter-Dixon House with its quilt-covered beds and photos of old islanders; the picturesque, cedar-sided Portsmouth Life-Saving Station, neatly trimmed in red, with its metal bunks and breeches buoy. 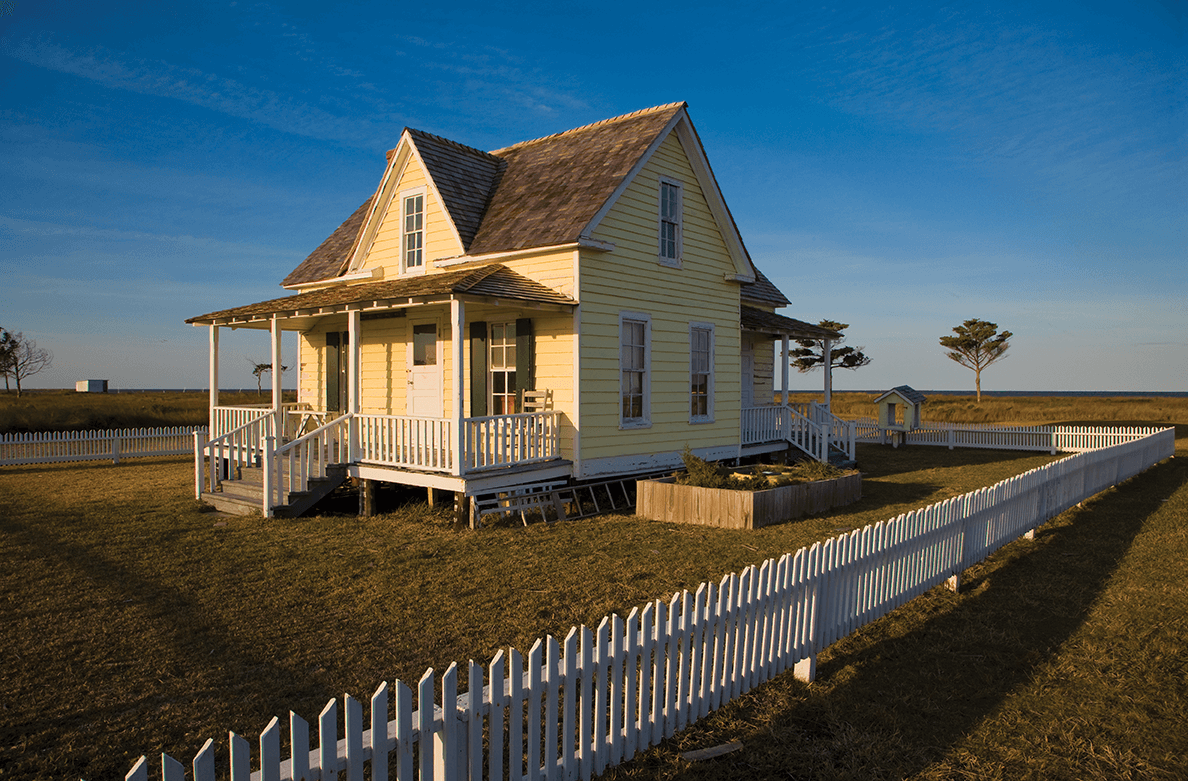 On this part of Portsmouth, it feels as if the villagers will be right back in a minute, as if they’ll come walking out of those wild edges and back into their island life. But Portsmouth’s old villagers are not coming back.

European settlers set their sights on Portsmouth Island in the mid-1700s because of its location along Ocracoke Inlet, the state’s major trade route at the time. Portsmouth was the Outer Banks’ first planned village; instead of growing up slowly, one house at a time, it was planned on paper in 1753 before anyone actually lived here.

In short order, Portsmouth grew to be a thriving maritime port. In the mid-1800s, more than 1,400 cargo vessels per year came through Ocracoke Inlet, and Portsmouth, along with Ocracoke, provided all the manpower, warehouses, wharves, merchants, and lightering vessels to support such commerce. By 1850, the village had more than 500 residents.

Portsmouth’s decline came after the opening of Oregon and Hatteras inlets in the hurricane of 1846. Over the years, sea trade moved farther up the Outer Banks, and Portsmouth established no new industry. The U.S. Life-Saving Station built on the island in 1894 provided a few jobs for some island men until it was decommissioned in 1937. But a string of devastating hurricanes drove many people to give up island life. By the early 20th century, Portsmouth was just a small, close-knit enclave of fishing families. In 1955, there were 12 people left on the island. By 1971, only three people were left. That year, the last male resident passed away, and the last two female residents stopped staying year-round but came back to spend time there until they got too old to make the trip.

The village may have been abandoned long ago, but it has not been forgotten. It may look empty, but it doesn’t feel that way.

“No one lives there, but I feel like there’s a strong presence, something of a closeness to the spirit of the past,” says Dave Frum, the National Park Service’s Portsmouth village caretaker. “You get the sense that important things happened here.”

Even today, people with family connections or ties to the old village have a fierce love for the island. Even the ones who had to eat seagull eggs in hard times, who had to travel by boat to Ocracoke to get a chunk of ice, who had smoke blowers on their lawn mowers to ward off mosquitoes, longed for Portsmouth Island when they were gone.

Today, Portsmouth village is preserved by the National Park Service as a museum-like reminder of a long-gone time and place — a 1930s Outer Banks fishing village — a place most of us never knew and no one will ever know again. Displays and exhibits tell the stories of the people who lived here, the harsh life they endured, and their love for it, too.

Frum and many dedicated volunteers lovingly tend the village for visitors. Volunteers-in-residence pitch in at various times, coming to live on the island alone or in twos for a couple of weeks in the summer and fall, to mow the grass and greet the visitors coming in at Haulover Point or Wallace Channel docks. A group of island descendants and devotees known as the Friends of Portsmouth Island lends a hand, too, raising money, working on the island buildings, and holding a reunion every other year to keep interest in the village alive. 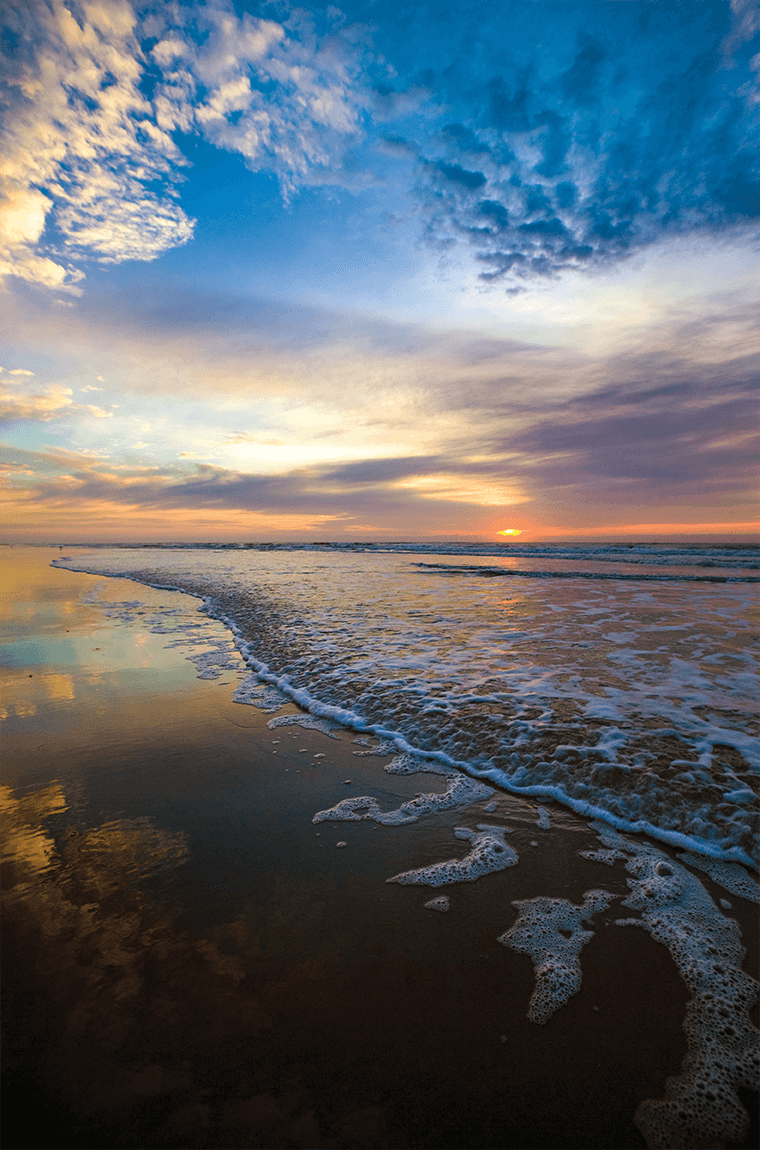 An Ocracoke resident, Frum has been boating to Portsmouth two days a week for more than 20 years and has probably spent more time on the island than most anyone alive. He’s taken everything nature can dish out in the name of maintaining this village.

Frum knows Portsmouth Island. He can tell you when the indigo buntings are there in April, when the blue teal are there in September, when the gannets will blow in during winter. The plants, the animals, the weather, the feeling of the old village —it’s all become a huge part of his life.

“It’s one of those places that gets in your heart,” Frum says. “It has a draw on you. If you spend time there, it grips ahold of you.”

That’s what people often say when they talk about their love for Portsmouth Island. They talk about the strong magnetism of the island and laugh about the impracticality of feeling most drawn to the place that’s the least comfortable and the hardest to reach.