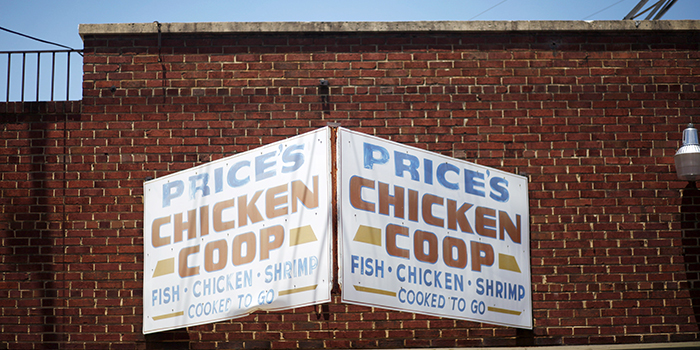 On a side street just south of uptown Charlotte, the smell of peanut oil and frying chicken hangs warm and thick in the air. At a small brick storefront, the doors swing open at a rhythmic pace — one person enters as another leaves carrying a cardboard box topped with small circles of grease.

It’s 10:30 in the morning, but Price’s Chicken Coop is already filling lunch orders.

The Price family has been packing lunches here since 1962. That’s when D. Talmadge Price and his brother Pat expanded their wholesale chicken business — Dilworth Poultry Co. — into a takeout spot for local factory workers in an industrial section of the city.

In the 52 years since, as the factories gave way to fancy apartments, and mom-and-pop shops became upscale boutiques, the one constant has been Price’s. Talmadge’s son Steve Price runs the place now. It’s such a fixture here that last fall, the coop made news just by replacing its rusted old sign with a new one.

Other than the sign, the place has seen few renovations since opening in 1962. The interior walls are spare, white cinder blocks. A handwritten sign reads “cash only.” And a row of fryers lines the back wall.

Although there’s barbecue, burgers, and fish on the menu, most people come here for one thing — the chicken.

The recipe is simple and consistent. Marinate the chicken for one day, coat it with seasoned flour, and then deep-fry it for 10 to 25 minutes.

The restaurant’s working-class roots are reflected in the prices — a four-wing meal with tater tots, roll, hushpuppies, coleslaw, and sweet tea costs little more than $8.

Price’s is still takeout only. Cars line either side of the street, their engines idling. Drivers and passengers balance boxes on their laps while biting into juicy wings and legs. Others sit on benches that line the light-rail track across the street or drive to nearby Latta Park for a picnic.