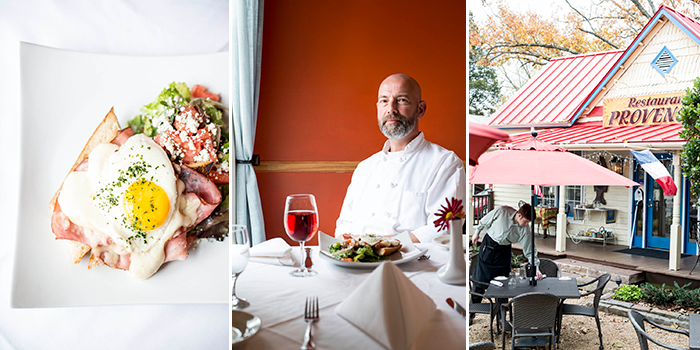 The French restaurant Provence represents a bastion of dependability in Carrboro, a town whose proximity to UNC-Chapel Hill means constant change is the norm. “Customers come to have a consistent menu that stays the same,” says co-owner and chef de cuisine Baptist Knaven. “Many customers have been coming for years and years.”

Provence was started by a Frenchman, Felix Roux, in 2002. Around the same time, Knaven moved from his native Netherlands to North Carolina, where he and his wife opened a successful Mediterranean-inspired restaurant, Café Zito, in Morehead City in 2005. Finding the quieter winter months difficult for business, they ultimately moved to the Triangle.

Knaven’s involvement with Provence was “sort of a coincidence,” he says. “I happened to walk in here and liked the atmosphere.” After 10 years, Roux was looking to sell; Knaven spent a year and a half working at Provence and decided to buy. He had lots of ideas for the restaurant: He redid the patio, commissioned a mural for the cozy bar area, and started exhibiting local art in the dining room in month-long installations. And he introduced lunch. Knaven was careful to keep tried-and-true dinner-menu items like whole fish baked in rock salt, but adding a lunch menu meant that people could come to the restaurant for more casual occasions, too. They could escape from the real world into Provence for a croque-madame or moules-frites, or even escargot.

Still, he had his own ideas about how the classic dish would be: Usually, the difference between a croque-monsieur and a croque-madame (“croque” comes from the French verb croquer, meaning “to crunch”) is that the former comes with Mornay sauce, and the latter with an egg, but Knaven likes to put sauce on the madame, too, because “it’s a little juicier.” He also uses a baguette, rather than the white bread traditional in France.

Knaven ate a lot of French food growing up in the Netherlands, but his work as a chef has been largely influenced by his first career: He traveled the world as a classical musician, a double bass player. Traveling meant eating in restaurants, and eating in restaurants meant watching and learning. “I looked at restaurant work as a stage performance,” he says. “Everyone has their role. It’s like a long-running Broadway performance.”

He’d always cooked and, at some point in his 20s, decided that he should have his own restaurant by age 40. To that end, Knaven says, “I observed restaurants — the perfect server, the perfect maître d’, why some art works and some doesn’t, what seating works best.” By the time he opened his first restaurant at age 39, he’d worked in enormous restaurants and tiny ones, and he knew he definitely preferred the tiny ones.

“My heart always went out to small restaurants,” Knaven says. “I like the fact that the patrons are involved in what goes on. I like intimacy. I do a lot of meat smoking for the restaurant in my own backyard. That’s what makes my blood flow.”

—
Katie Saintsing is the assistant editor at Our State. Find more of her archived stories here.