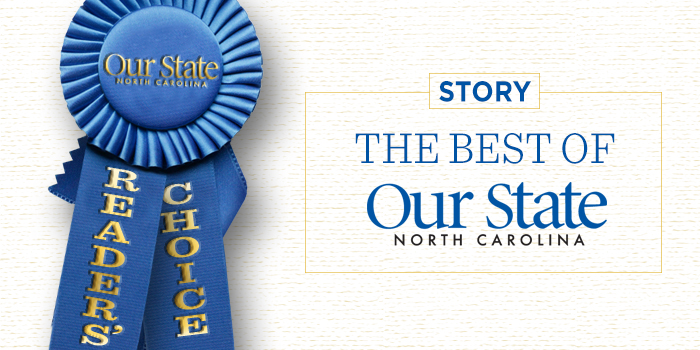 The results are in! Click here to see the winners of the 2014 Readers’ Choice Awards.

I Could See for Miles by Michael Parker (January)

Vistas in North Carolina range from mountaintops to coastal plains, but the best views are sometimes hidden places that are all your own — spots you can escape to, grow in, and dream about forever.

Walking through the Hall with a Legend by Tim Crothers (February)

The achievements chronicled at the North Carolina Sports Hall of Fame elicit “Where were you?” queries from older generations, and “Who’s that?” exclamations from young fans. Coach Bill Guthridge has an answer to both questions: That’s him on the sidelines.

Invasion of the Underclass Undergrad by Jimmy Tomlin (April)

For a brief time in the 1970s, college students threw off their inhibitions — among other things — and ran free.

Forty years ago, an advertising artist from New York and his wife found an island paradise. Today, their children take care of their widower father and the resort that their parents created.

When Milk Reigned at Biltmore by Bryan Mims (June)

George Vanderbilt’s pampered Jersey herd was the foundation of Biltmore Dairy Farms, but most folks in Asheville remember its milkmen and Winky Bars.

Thomas Wolfe and F. Scott Fitzgerald defined the ’20s — the boom and bust, the roar and crash — a period that is easily reimagined in this timeless North Carolina city.

A Love Letter to North Carolina by Drew Perry (September)

Drew Perry has a crush on North Carolina, and he doesn’t care who knows it. To illustrate his ode to the Old North State, we sent artist Suzanne Cabrera to paint the scenes of some of the writer’s favorite memories.

The Charlotte area has been a driving force in stock car racing since the sport’s earliest days, when moonshiners in hot rods outran the feds on midnight runs during the week and traded paint on the track on weekends. The area is now home to the biggest race teams, the NASCAR Hall of Fame in downtown Charlotte, and Charlotte Motor Speedway in Concord. Visit any of those places, and you’ll find citizens of “NASCAR nation,” who love to share their passion for racing.

It’s easy to take for granted the gifts of electric heat and light, but it wasn’t so long ago that much of our state lay in darkness. Our thanks to the linemen who faced — and continue to face — sleepless nights, dizzying heights, and the constant peril of electrocution to give us power through the simple act of flipping a switch.

A coastal snowfall, an iconic sled, and a gruff grandpa conspire for a final adventure down the dunes.