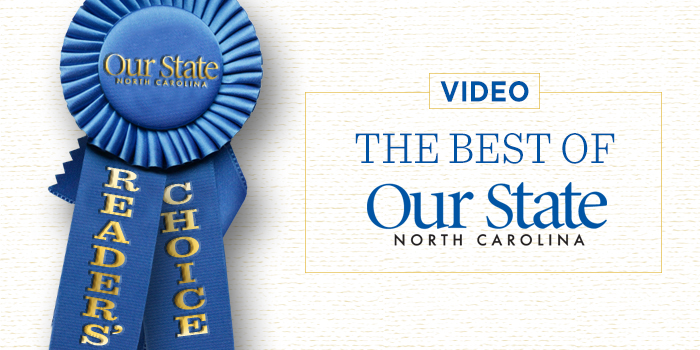 The results are in! Click here to see the winners of the 2014 Readers’ Choice Awards.

The Secret to Fried Okra with Executive Chef Jay Pierce

Lucky 32 Southern Kitchen offers “farm to fork” fare at its Greensboro and Cary locations. Join Executive Chef Jay Pierce in the kitchen and see how he fries up local okra. Read more about okra in Our State’s August 2013 issue.

Still Searching: Beyond the Trails at Stone Mountain State Park

A group of hikers in the foothills is retracing the steps of former moonshiners at Stone Mountain State Park. We followed them for a day to see what lays beyond the trails. Read more about North Carolina’s moonshining past and present in Our State’s July 2014 issue.

In this video, photographers Lissa Gotwals and Brent Clark talk about their experience capturing the many personalities of Durham, N.C. See their shots in the January 2014 photo essay.

In 2007, folk musician Stephanie Stewart left North Carolina for the Pacific Northwest. A year later, she returned with inspiration for a song. Listen to “Wake Me, Carolina” and read more about this song and home in N.C. in Our State‘s December 2014 “Carolina Classic.”

We sat down with Anne-Fitten Glenn, Beer Communinatrix for Oskar Blues Brewery in Brevard, to talk about what makes their beer special. Read more about N.C. breweries.

Southerners were foodies before the word was coined. Call it haute cuisine if you want, but these six North Carolina classics are table staples – the good eating that defines us. Read more about Pepsi, boiled peanuts, honeysuckle, red eye gravy, pimento cheese, and okra in Our State’s August 2014 issue.

Leah Shaw, winner of Our State’s 2014 Singer-Songwriter competition, performs her song “Carolina I’m Home” Find out more about Leah Shaw in an Our State Artist Q&A.

With a passion for local food and a vision for future farming generations, Martha Mobley serves as a pillar of North Carolina’s agriculture community. The Unearthed series is presented by Lowes Foods. Read more about Mobley’s farm and her commitment to local food.

Our very own Arlene Gutterman welcomes you into her kitchen & serves up her recipe for classic pimento cheese. Read more about pimento cheese in Our State’s August 2014 issue.