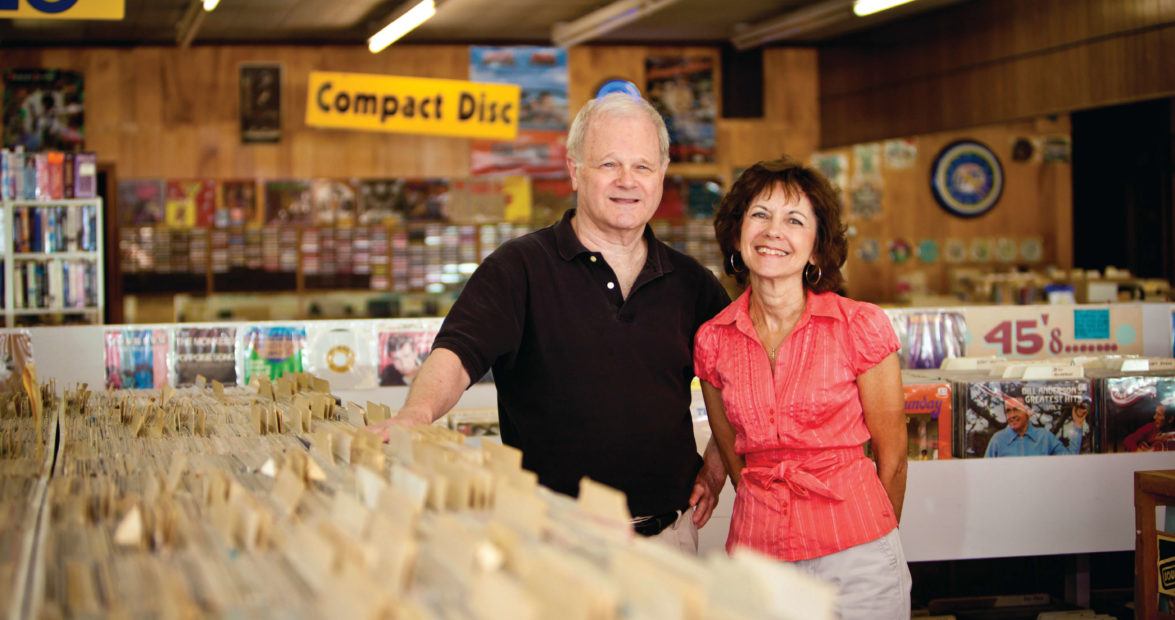 Comfortable in a pair of khakis and a short-sleeved Polo shirt, with his tousled salt-and-pepper hair falling over his forehead, John Hiatt stands behind a desk examining an unopened copy of the The Beatles’ “White Album.” A customer has brought it into his store hoping Hiatt will buy it. He probably will.

Hiatt is a collector. That’s how he came to own Remember When Records, a Greensboro store that he’s pretty sure is the largest of its kind in the state. His 3,200-square-foot retail shop on High Point Road holds more than 150,000 albums, singles, CDs, and DVDs, and that’s only the beginning. He also has two warehouses full of several hundred thousand more items.

When he was a teenager, he estimates he owned nearly 500 45s. But that was many collections ago. In between that obsession and this business, there have been automobiles; he still owns an impressive fleet — a 1969 Cadillac convertible, ’69 Cadillac hardtop, ’94 Mustang, ’69 Cadillac, ’77 Cadillac, ’71 dump truck, ’76 El Camino, and a Lightning Pickup. And in the late ’60s, it was jukeboxes, which triggered the quest that evolved into a business like few others in this era of Internet-driven music sales.

“It was never a plan to open a record shop,” says Hiatt, who has worked at a trucking company and in real estate. He began collecting jukeboxes as a hobby in the late 1960s and searched for the perfect one for the next 20 years. “I had a picture in my mind what I wanted, but the bubble machines all played 78s,” John says. “I was looking for one that played 45s.”

After purchasing his first jukebox, Hiatt pulled out his 45s from high school — singles by Buddy Holly and Elvis Presley, and the first slice of vinyl he remembers buying, “The Green Door” by Jim Lowe.

“We would sit on the floor together and listen to them,” he says. “They’d get shuffled around like cards. … You didn’t know they were going to be valuable then.”

When he had to throw most of them out, he started collecting again. He was flipping through 45s at a store in Summerfield about 20 years ago when he learned the store was closing. He bought part of the share and moved it to a location in Greensboro. In 1995, Hiatt purchased the rest of the inventory and moved the store to its current location.

Stepping into the modest brick-and-glass storefront on High Point Road, you recognize right away you’re someplace special. For one thing, it’s light. “It’s the opposite of every store I went in,” Hiatt says. “Other stores had posters on the windows, which made the inside very dark and unable to see the records.”

Remember When is also as orderly as a library. Merchandise is organized in neat, if jam-packed, rows on shelves, in crates, and in boxes. Items are arranged alphabetically by artist, genre, and type — all graded, cleaned, and priced. And you can find treasures here: Masters, wax, picture, and shape discs.

Part of the fun of the store is flipping through the stacks to see what you can find. But if you’re looking for something in particular, just ask Hiatt or his wife, Brenda, who may not share her husband’s encyclopedic knowledge of music or the store’s inventory but is happy to help track down a coveted song or artist.

Rob Rierson makes weekly visits to Remember When. A collector of music and turntables, he’s on a constant search for records he used to have in the ’60s and ’70s. He comes here for the well-organized collection and the high level of quality he finds at the store.

“Care goes into the product,” he says. “That differentiates them from other places.”

On average, only one out of every 10 LPs and one out of every 20 45s make it to the Remember When shelves. Records are graded: VG+ down to VG-, but even a VG- is in pretty good shape; it has no skips, no needle-stick, maybe only some light scratches.

“I don’t have to worry about buying something of bad quality here,” says Bo Boughton, a monthly customer. Boughton has a current collection of 500 records and has been coming to the store steadily for a year.

Remember When has many local regulars, but its appeal reaches as far as England and Japan. Some are collectors, but many just want music from their childhood.

Collectors come back to Remember When not only for the physical quality of the individual items, but also for the depth and breadth of Hiatt’s collections. The store carries 40,000 to 50,000 rock titles alone.

A casual glance among the labels reveals a huge Elvis Presley collection, row after row of Michael Jackson, and a sizeable selection of The Who, not to mention offerings from the more obscure artists, such as the Chocolate Buttermilk Band.

It’s easy to lose track of time in here. Hiatt and his staff are happy to let you wander for hours or to chat with you about what’s playing in the store, which artists are in high demand, or how much they’ll pay you for that album you might be willing to part with for the right price.