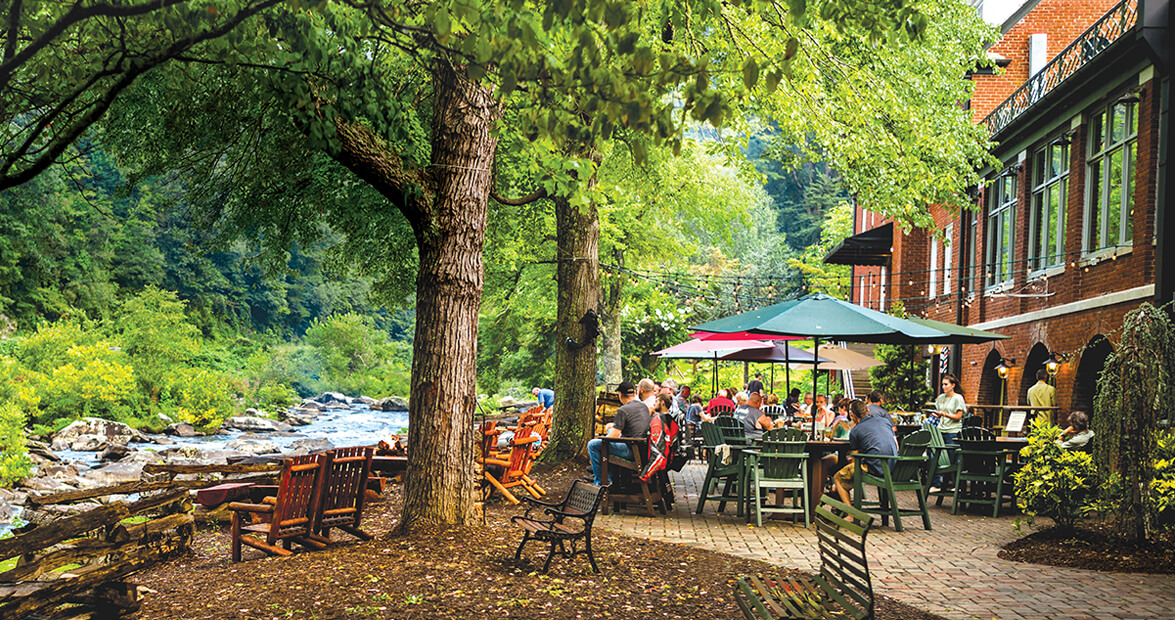 The Historic Tapoco Lodge welcome committee meets us at the door, his tawny coat a lovely complement to the moss-colored entry. Red, Tapoco’s resident redbone coonhound, greets each of us — my husband, Chris, our kids, and me — with a sniff, then flops down and rolls lazily onto his back to collect a toll for admittance: one belly rub. My 6-year-old son happily obliges, and my daughter, in typical 4-year-old fashion, leans in for a sloppy hound-dog kiss.

After a couple of nights in the great outdoors, camping at Horse Cove Campground in the Nantahala National Forest, we’ve come to Tapoco in search of creature comforts: a hot shower, a cold beer, and a chef-made meal. Situated in the southwestern tip of North Carolina, only a handful of miles from the Tennessee line, the Historic Tapoco Lodge offers all three, in a package so welcoming that Red relinquished a life of bear hunting to serve as Tapoco’s doorman — er, dog.

When the five of us enter the lodge — yes, Red comes, too — we find the charms inside no less compelling than what met us at the door. The massive fireplace is new since our last visit, but you’d never know it; amid the cozy furnishings, terra-cotta tile floor, and tin ceiling, the glow of a fire is warmth on top of warmth. Opposite the entrance, a row of windows reveals the Cheoah River’s churning whitewater. 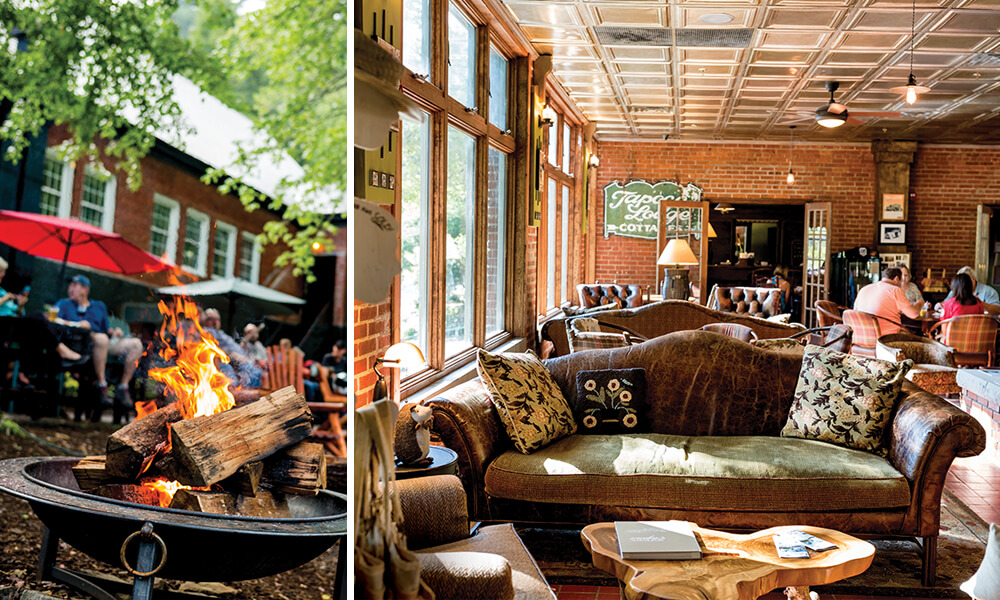 Leather sofas in the lodge’s lobby offer a cozy respite indoors, while the fire pits let you warm up — and dry off — outside. photograph by Charles Harris

Over the course of the past 20 years, Tapoco has undergone meticulous restoration that respects the lodge’s unique history, yet appeals to contemporary tastes. The lodge’s nine guest rooms are comfortably appointed yet free of contemporary “distractions” like Wi-Fi and television. In addition to the rooms in the lodge, Tapoco has eight cabins that have been renovated to house a total of 20 guest rooms. The cabins, which do have TVs, maintain lovely 1930s-esque details — including beautiful penny tile floors in the bathrooms and cedar walls — as well as porches outfitted with overstuffed furniture for lounging through the afternoons.

We’re staying in the Cheoah Cabin, Room 2, a well-stocked yet simple nook overlooking Tapoco’s fire pits. That afternoon, while our kids giggle on the bed with their typical hotel giddiness, Chris and I laze on the porch, watching fellow guests stroll the grounds.

Amid the cozy furnishings, the glow of a fire is warmth on top of warmth.

Chris first stumbled on Tapoco years ago, chasing the Cheoah’s whitewater. For 70 years, the Cheoah didn’t run — diverted by the Tapoco Hydroelectric Project (THP) for energy generation — but in 2005, an unexpected benefactor muscled a change. The Appalachian elktoe is a species of mussel native only to the cool, rapid rivers of western North Carolina and eastern Tennessee. It was for the reestablishment of those mussels that the THP began releasing water from the Santeetlah Dam in September 2005. The bonus, of course, is the whitewater.

The Cheoah’s whitewater is a delicacy made sweeter by its highly anticipated release. The current operating agreement guarantees at least 18 water releases annually until 2045. For each of these, Tapoco throws a Cheoah River Release & Bash, which fills the lodge with spectators. “There have been a few instances where we’ve helped pull out boaters in a jam,” Tapoco operations manager Andy Cable recalls with a laugh. “But that’s just part of the job.”

It’s no surprise that Tapoco celebrates the whitewater, since it was whitewater that founded the Tapoco. Less than a mile away sits the Cheoah Dam, a 225-foot-high hydroelectric complex that holds back the waters of the Little Tennessee River and forms a 644-acre reservoir. Aluminum Company of America, majority owner of the Tallassee Power Company, established the Tapoco property to house workers building the Cheoah Dam. Tallassee Power Company completed the dam in 1919. A little more than a decade later, Aluminum Company of America built Tapoco Lodge on the property as a retreat for executives, including company president Andrew Mellon, who went on to serve as secretary of the U.S. Department of the Treasury. 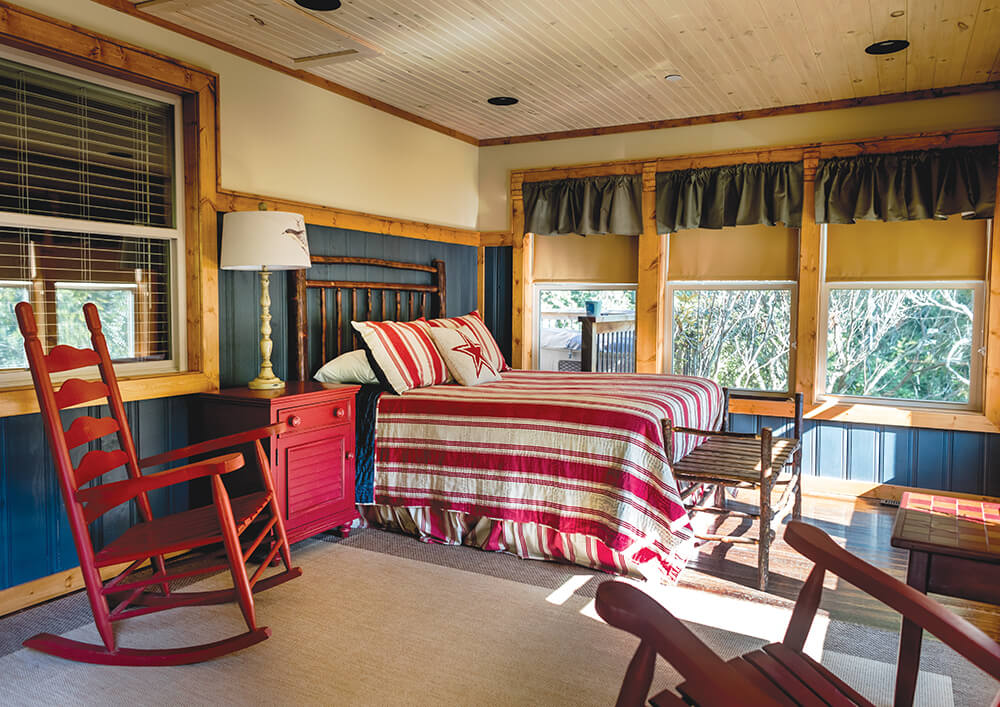 Today, Tapoco has sloughed off that executive pretense in favor of catering to the area’s many outdoor adventurers: kayakers, of course; motorcyclists cruising the world-famous Tail of the Dragon, which begins only two miles from Tapoco’s driveway; and hikers on Benton MacKaye Trail, which stretches from Springer Mountain, Georgia, to Davenport Gap in Great Smoky Mountains National Park, and passes through Tapoco property along the way.

The Cheoah’s whitewater is a delicacy made sweeter by its highly anticipated release.

While the daylight hours provide numerous opportunities for outdoor adventuring, dusk at the lodge brings occasions for quality, slow-living entertainment. Each temperate evening, Tapoco staff lights campfires in pits lining the Cheoah’s banks and in a fire-pit area near the cabins, inviting guests to gather, chat, and toast up a s’more with ingredients sold in the lodge store. Weekend evenings bring film screenings at Tapoco’s Tin Can Movie Theater, a social space and event venue located on the grounds.

It’s on our early evening stroll past the Tin Can that we get an up-close look at Tapoco’s untamed nature: a black snake, four feet long, pushing five, spirals from the light fixture between the front doors. I shrink back, but Chris takes the kids over for a look. Moments later, Cable comes whirring by on his golf cart, stopping to ask if we’d like a tour of the Tin Can. “He won’t bother us,” Cable says, waving his hand in the snake’s direction and heading decisively toward the entry. But I’m still hanging back, not wanting to cross paths with the beast. Cable laughs, and leads us through a side door instead. 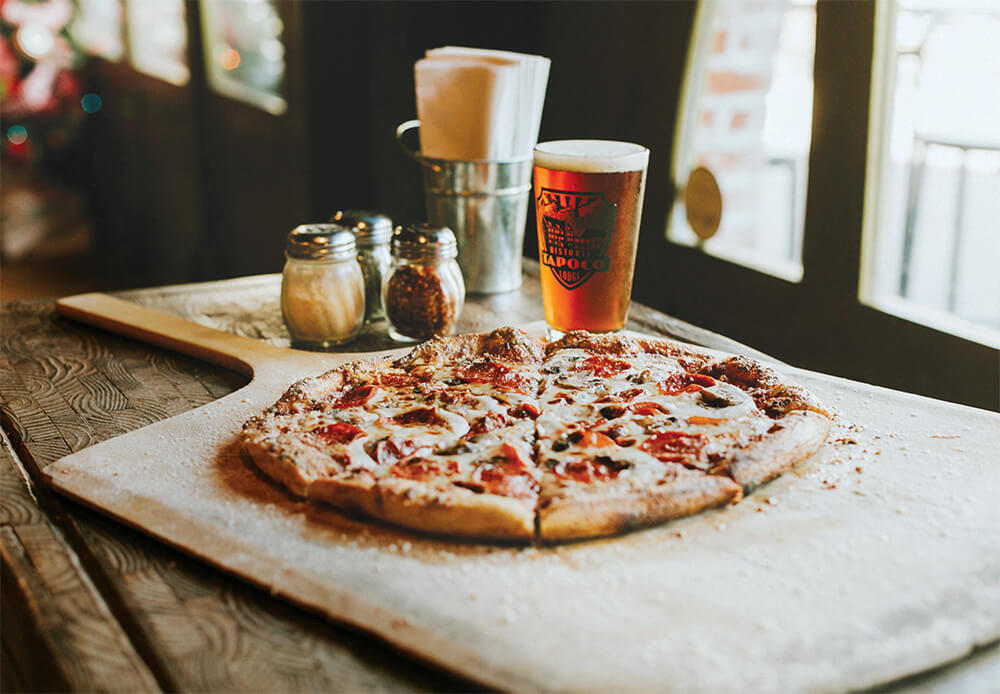 After we’ve showered and scrubbed up the kids to presentable form, we head down to the Tapoco River Grill, on the back side of the lodge, overlooking the Cheoah. Chris and I order mountain trout nuggets, a pitcher of cold Asheville-brewed Green Man porter, and a brick-oven-baked pizza, then settle in, listening to the rush of the water. Meanwhile, the kids run around, chasing butterflies, hunting for prize rocks, and devouring handfuls of the most kid-friendly trail mix ever created — M&Ms, Goldfish crackers, and peanuts — which the barkeep offers by the cupful.

When our food comes, so does Red, patrolling the patio for scraps. One eager young busboy tries to lure him away from diners with a handful of pepperoni, but we’re happy to have him at our feet, this hunting-hound-turned-lodge-dog, a fitting ambassador of Tapoco’s natural beauty and wild spirit.