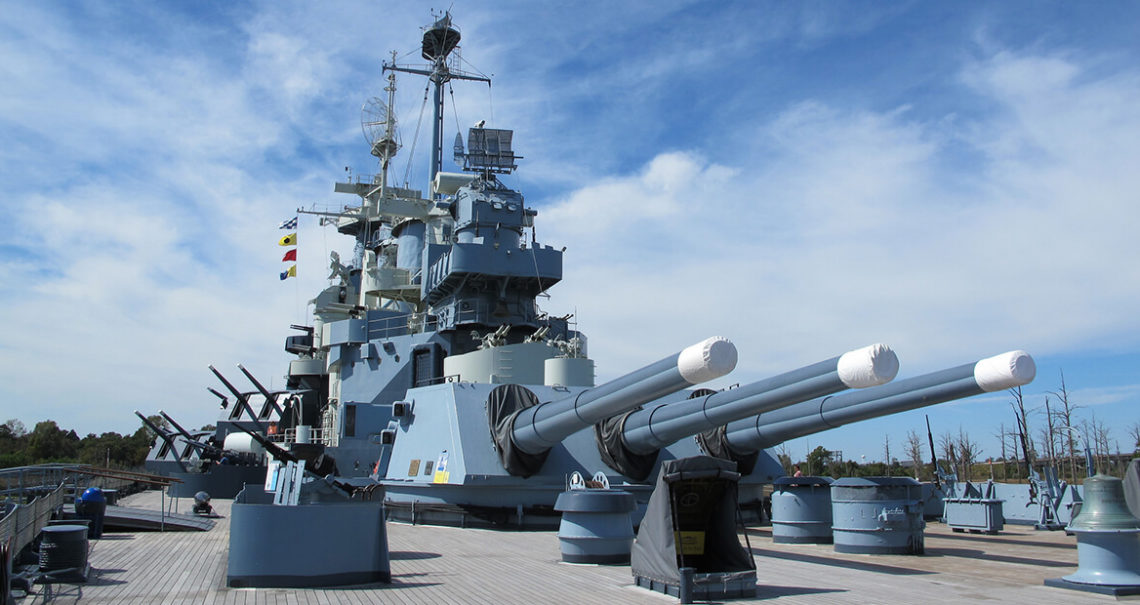 It’s January 1942, and a heavy storm churns violently in the ocean, 15 miles off the coast of Key West, Florida. Aboard a destroyer, 400 men sit tight, heading toward their battleship. These men, and this ship, are bound for war.

The destroyer chugs into the storm. Night falls thick, and waves thrash violently against the ship, swaying the gangway and threatening to throw skinnier sailors into the sea. Straining against the darkness and the lurch of the ocean, the men spot it. Their ship. The USS North Carolina.

She was impressive, looming out there in the darkness. She stood 155 feet high and stretched 729 feet long. Her 16-inch guns were the largest ever on a United States ship.

Chuck Paty, a 17-year-old serviceman from Charlotte, was aboard that night, and he remembers his first glimpse of the battleship. “Oh, she was just awesome,” he recalls.

Later, when the North Carolina made her way through the Panama Canal, her 108-foot girth barely squeezed through. And when she steamed into Pearl Harbor in July 1942, she stopped everything. Sailors quit working to stare like they might at a pretty girl, and people ran from airplane hangars and machine shops to see. Ships sent flags up and down their masts, saluting her arrival.

She came not a moment too soon. The men had felt unsettled, uncertain, since the Japanese attacked, but the coming of the North Carolina changed everything.

During her commission, the USS North Carolina went on to devastate the enemy, downing 24 planes, assisting in the demise of countless others, and helping bombard their strongholds nine different times. Six times, she was wrongly reported sunk, as though the Japanese hoped that saying something enough makes it come true. Fighting in every major offensive naval engagement in the Pacific during World War II, she earned 15 battle stars and the nickname Immortal Showboat.

Yet for all the havoc she wreaked, the battleship protected her boys. From her first battle to the Japanese surrender in August 1945, out of 144 officers and 2,195 enlisted men, only 67 were injured and only 10 died. The USS North Carolina became more to her men than a weapon of war and violence. She was a second home.

In 1958, a Wilmington man named James S. Craig opened his newspaper, the Wilmington Morning Star, and came across a news item that horrified him. He learned that the USS North Carolina, which was moored in New Jersey, would be scrapped and sold.

To Craig, this idea was unthinkable. An Army veteran himself and a member of Wilmington’s American Legion Post 10, Craig understood the significance of the ship. He believed that he had to do something to try to save it.

He remembered visiting Houston, Texas, and seeing the Battleship Texas, a World War I and World War II ship that became a memorial at the San Jacinto Battleground. Surely, he thought, the same could happen to the North Carolina. She could become such a memorial, a place for 10,000 North Carolinians lost in World War II to, in a way, come back to life. Where better to resurrect them than on the ship that had once been called the Immortal?

Craig enlisted the aid of Hugh Morton, the former publicity manager for North Carolina Gov. Luther H. Hodges. Craig knew that Morton had the governor’s ear, and that if anyone was likely to persuade the governor to do something, Morton could. Something like convincing the Navy to hold off on scrapping the USS North Carolina.

It worked, and the governor agreed. During the next several months, the men contacted the Battleship Texas Commission to learn how they acquired the Texas. They traveled to Bayonne, New Jersey, where the USS North Carolina was “in mothballs” at the New York Group Atlantic Reserve Fleet. There, the USS Washington, a carbon copy of the North Carolina, was moored beside her. They watched as the Washington was hauled away to be scrapped. Morton later recalled, “Tears almost came to the eyes of some of those old Navy sea dogs at the thought of the North Carolina being cut up.”

Saving the ship, though, would be expensive.

In the twilight of his term, Hodges suggested to Morton that, instead of taking the money for the ship from the state, why not get the people involved?

Morton came up with a plan. They would create a North Carolina Navy. From each of the state’s 100 counties, they would select an “admiral” responsible for seeing that their counties met a fund-raising quota. People who gave $100 — equivalent to about $725 today — would also be named an admiral, earning a certificate and lifetime free admission to the ship. Incoming Gov. Terry Sanford suggested they involve the schools, so every child who brought in a dime received a pass for free admission.

Morton, along with Wayne Jackson at WRAL in Raleigh, developed the “Save Our Ship” promotional television program. It aired on prime time, simultaneously across the state, and invited North Carolina celebrities, such as Andy Griffith, Jane Morgan, and David Brinkley.

And then there was the matter of deciding her final resting place. Three cities jostled to the forefront for consideration: Southport, Morehead City, and Wilmington. Southport and Morehead City were beautiful, and the ocean provided a gorgeous natural backdrop. But the beauty hid a curse: Their proximity to the ocean made the ship vulnerable, particularly to hurricanes. So officials decided to berth her at the safest location, the one farthest from the sea. Wilmington.

Former crew members began to catch wind of the Save Our Ship campaign. They were outraged that the Navy had the gall to even think about destroying their ship.

Paty, the Charlotte native who became a radioman aboard the USS North Carolina after meeting her that stormy night in 1942, was one of those crew members who heard the news. “Oh, that was painful,” Paty recalls. “It’s like we’d just heard that they were going to kill our parents, our mother, our father. The feeling was that strong.”

In the 1930s, as America crawled out of the Great Depression, it sold shiploads of old warship scrap metal to the Japanese. They made bullets from it and then fired those bullets at Americans in World War II.

Paty, who was working for a truck manufacturer, took action. Although he’d never spoken in public before due to horrible stage fright, he became a Charlotte-area spokesman for the cause.

By the end of the Save Our Ship campaign, Paty gave more than a dozen speeches. To this day, his wife marvels, “You were so bashful — how did you ever learn to talk to a crowd of people?” she says.

“Sailors always fall in love with their ships,” Paty says. “They love them as if they were people. Like they were creatures. It has, oh gosh, a life, so to speak.”

Paty took his discharge after the Japanese surrender. With no more war to fight, leaving the battleship was like leaving home.

Can You Spare a Dime?

From Wilmington to Charlotte, newspapers called the USS North Carolina “our ship.” Sailors gave her their youth — and some, their lives — and their children gave her their dimes, and more than a million people gave something in between.

The Save Our Ship campaign raised nearly $330,000, about $2.4 million today. Among those who were named admiral was none other than President John F. Kennedy.

In a remarkable display of support, Southport and Morehead City, the two sites that jostled with Wilmington for the North Carolina, were among the first regions to reach their quota and went on to vastly exceed it.

On September 25, 1961, the North Carolina began her final voyage, leaving Bayonne with the New York City skyline in the background. With no power of her own, nine ocean-going tugboats hauled her home.

The day before her departure, Wilmington held an air show. Jimmy Craig went up in a plane with six daredevil paratroopers to get a rare glimpse of the North Carolina’s slip. He’d finally see his three-year-long vision come true.

But things went horribly wrong, and Craig, having saved the battleship’s life, was suddenly left fighting for another: his own.

The plane barely got off the ground. It crashed on takeoff, exploding and instantly killing several while critically injuring about a dozen others, including Craig. He was flown to Brooke Army Medical Center in San Antonio, Texas, with the North Carolina just days from reaching the Cape Fear River.

A few weeks later, Paty, now 36, stepped out of his car into a field of mud a few miles inland of the Atlantic Ocean, down the Cape Fear River, to stand before the battleship. She’d made it home. It was surreal for Paty; he thought he’d never see her again.

Paty saw someone across the field, ran to him, and greeted him with a salute.

Maxwell handed Paty a flashlight, and they boarded the gangway, the officer and the radioman returning home together. It was dark like the first time but without the storm and waves.

Paty descended three decks, where nobody can go today. He walked along the bunks and found his.

On October 14, 1961, the USS North Carolina opened to the public, and more than 5,000 people walked the ship’s decks. None of them knew that, on that same day, as their hearts pounded like Paty’s, Jimmy Craig’s stopped. Craig had died in San Antonio.

Now, the parking lot is paved, and it’s packed with cars bearing license plates from all over the United States, from New York to California to Florida to Alaska.

Aboard the battleship, you can tell who’s new. Their mouths hang open, but they don’t talk much. After all these years, she still steals folks’ breath.

Beneath her deck, there’s a room that tells the story of the Save Our Ship campaign. On one wall, files name the 2,400 admirals in the North Carolina Navy, and the schools whose children all brought their dimes, and the counties that met their quotas. Another wall holds a plaque bearing a picture of Jimmy Craig and some of the nicest words you’ve ever read about a man.

In 1964, someone donated spotlights in Craig’s honor. They flicker on at nightfall, reaching through the windows of the story room, falling on its walls, touching Craig’s face.

Across from that room is the room Craig would have called the most important. The names of the 10,000 North Carolinians who died in World War II, engraved in bronze, fill three walls that surround the five flags of America’s military branches. Air Force. Army. Coast Guard. Marine Corps. Navy.

Long after she could fight for them, the North Carolina’s boys fought for her. Jimmy Craig died before he saw her again, but he kept the Immortal Showboat immortal. This ship was born for war. She became a home. And in 1961, she found a home of her own.