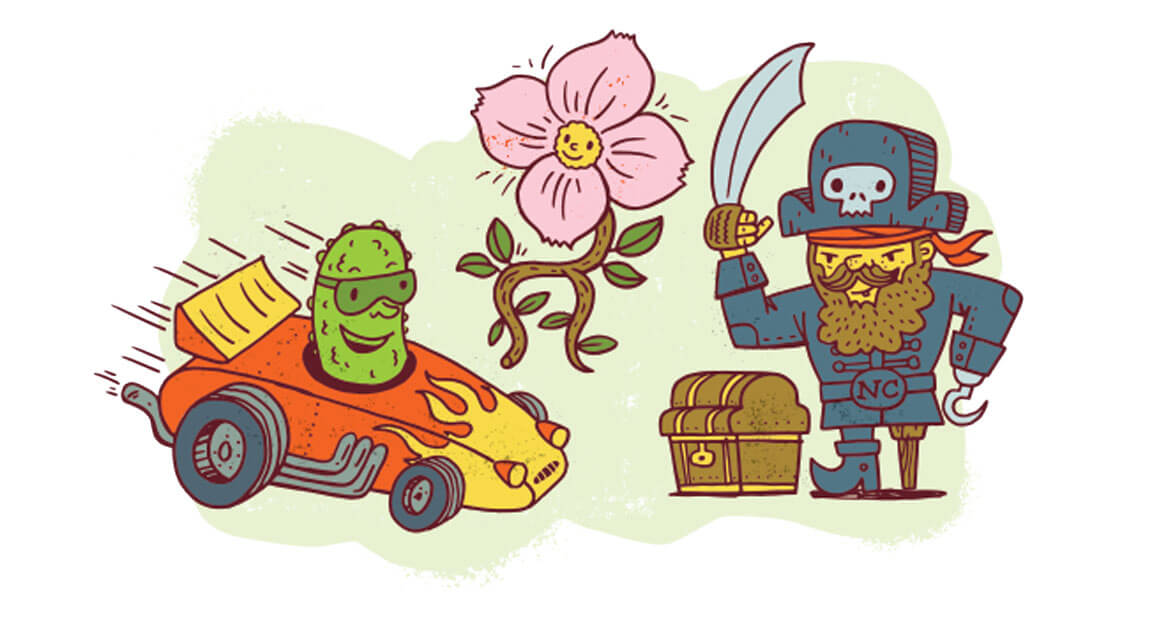 APRIL 12-13 You might spot Blackbeard walking down the street or see a sword fight happening before your very eyes if you visit Greenville during the annual PirateFest in April. For two days, 100 pirates take over the city’s Town Common to reenact what life might have been like for the many pirates, including Blackbeard, who landed on North Carolina’s shores in the 1700s. Visitors can watch pirates fire cannons over the Tar River or peruse the Captain’s Market, which offers pirate necessities like replica muskets and hand-stitched hats. Music, food, art, and a carnival — plus plenty of pirates and their antics — keep the fun afloat all weekend long.

APRIL 13 As home to the No. 1 pickle producer in the country, it’s only natural that Mount Olive hosts the annual North Carolina Pickle Festival. Now in its 33rd year, the festival attracts nearly 40,000 people and covers most of downtown with pickle-related activities. There’s the Pickle Packing Production Challenge, where contestants pack pickles into jars as fast as they can. There’s the Pickle Derby, where kids race pickles (affixed with rubber bands to miniature race cars). And, of course, there are free Mt. Olive pickles and a variety of pickle-flavored treats: pickle ice cream, pickle pizza, pickle snow cones, and, new this year, pickle cotton candy.

APRIL 26-28 In 1962, the beautiful dogwoods that line the streets of Fayetteville inspired the then-mayor to proclaim this place “The City of Dogwoods” and, soon after, establish the Fayetteville Dogwood Festival. The community celebration takes place when the trees burst into bloom each spring, drawing 275,000 people. The three-day festival offers free music, ranging from R&B to country to rock. Food includes classic fair snacks like funnel cakes and turkey legs, and unique treats like cheesecake on a stick. Local vendors show off their wares at the street fair on Saturday and Sunday, sharing the space with acrobatic performers and dance groups. 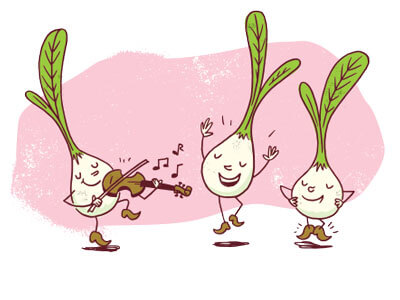 BBQ FESTIVAL ON THE NEUSE
Kinston

MAY 3-4 In Kinston, what started as a 20-team cook-off in 1981 has become the annual BBQ Festival on the Neuse, the largest whole-hog barbecue contest in the state. Cooking teams work all night to prepare for the judges’ tasting at 8 a.m. on Saturday, after which their pork will be served to the masses. Visitors can also explore arts and crafts, live music and other performances, one of the largest classic car shows in the state, and a replica of the Civil War gunboat CSS Neuse, featuring reenactors who demonstrate how a hog would have been cooked in the 1800s.

MAY 4 The Ham and Yam Festival in Smithfield features two quintessential Southern foods: country ham and sweet potatoes. Food vendors are required to feature one of the two foods on their menus, meaning that there are plenty of country ham biscuits, sweet potato funnel cakes, and sweet potato smoothies to feed the thousands that attend each year. The festival started 35 years ago as a competition between Smithfield, North Carolina, and Smithfield, Virginia, with each town vying to produce the best-tasting ham. When North Carolinians continued to win, the Virginia town gave up, but the festival continued, drawing more people each year to watch pig races, carve figures out of sweet potatoes, and enjoy the town’s two favorite foods.

MAY 5 Ramps — a wild onion native to the Blue Ridge Mountains — take center stage at the Ramp Festival in Waynesville, an 89-year-old celebration. Festivalgoers can try ramps raw or buy a ticket to a fund-raising meal that highlights their strong flavor and benefits the event’s host, American Legion Post 47. To prepare for the festival, members of the Legion dig in the mountains for enough ramps to serve fresh or to cook into the scrambled eggs, potatoes, and meatloaf that are served beginning at noon. Cloggers, live music, and crafts round out the celebration of this small but distinctly Appalachian delicacy.

MAY 17-19 The farmlands along Albemarle Sound grow a large portion of the state’s potato crop, a fact that Elizabeth City paid tribute to with the first NC Potato Festival in the 1940s. The festival, which includes a street fair, rides, and contests, now spans three days and draws 30,000 people. One of the longest-standing attractions is the National Potato Peeling Contest: Competitors have five minutes to quickly and efficiently peel as many potatoes as possible (you lose points if you hack your potato to bits). The peeled potatoes are sliced and fried by volunteers from the Coast Guard and the Shriners, then served up free to visitors. 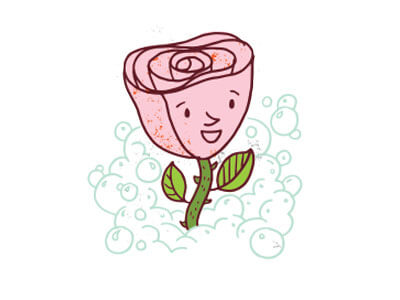 GREENING UP THE MOUNTAINS
Sylva

APRIL 27 The Jackson County town of Sylva celebrates spring with Greening Up the Mountains, the town’s largest annual event. Now in its 22nd year, the festival draws up to 12,000 visitors who come for food, arts and crafts, and live music by western North Carolina musicians. Spend a day browsing pottery, soaps, metalwork, and blown glass created by local artists and vendors, and don’t forget to stop by the crawfish boil for a New Orleans-inspired meal paired with a local craft brew from one of Sylva’s hometown breweries.

MAY 18 The town of Pink Hill has fewer than 600 residents, but more than 2,500 rosebushes. At RoseFest, visitors can take part in the Bubble Party — a foam-filled frolic — or a Run for the Roses 5K, or watch local bands or the firemen’s hose relay. A food truck from Chef & the Farmer, along with funnel cake and shave ice, satisfy cravings as visitors peruse booths selling crafts and roses. And each year, a Lifetime Achievement Award is presented to members of the town who have given outstanding time and effort to bettering the community.

MAY 11  In the 1800s, rural North Carolinians often relied on buggies as their main form of transportation. Every year since 1989, these old-time carriages make a comeback at the Carthage Buggy Festival, the only event of its kind. The Tyson & Jones Buggy Company, one of the largest in the nation, called the Sandhills town of Carthage home for nearly 100 years, until the 1920s. At this annual festival, locals and visitors from up and down the East Coast can see the factory’s buggies on display — plus a classic car show, live entertainment by local musicians, craft and food vendors, and, new this year, local craft beer and wine makers.