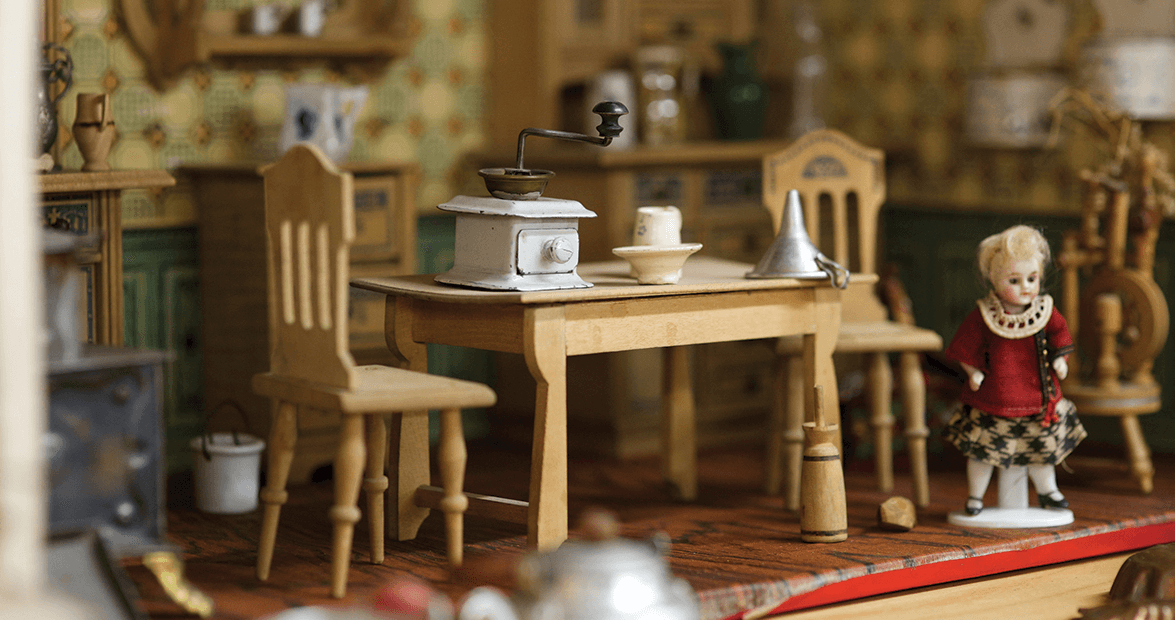 No one visits the Spencer Doll and Toy Museum without hearing the story of Amy Morris.

It was Amy’s memory, after all, that inspired the creation of the two-and-a-half-year-old museum, and it was Amy’s collection of some 300 dolls that became its cornerstone. Amy’s dolls, which include dozens of fully accessorized Barbies, occupy several hallowed display cases in the museum. In a sense, the dolls serve as guardians of the past, ensuring those sweet, innocent childhoods of yesteryear won’t be forgotten.

Amy lived a short life in her native Rowan County — she died in 1996 at age 21 — and she spent most of those years in a wheelchair. She was born with Werdnig-Hoffmann disease, a genetic disorder that caused her body’s muscles to atrophy.

During those 21 years, though, the world was Amy’s toy chest. She packed a lot of living into a short window of time, and one of her greatest passions was collecting dolls. Amy especially loved Barbies, and in particular her Bob Mackie Barbies, dressed glamorously by Mackie, the renowned costume designer for “The Carol Burnett Show” and Cher.

“Through her disability, I think Amy imagined herself as one of the dolls,” explains Beth Morris Nance, Amy’s older sister. “She had blonde hair and blue eyes like Barbie, and she was spunky. I think that’s why Amy liked to collect the dolls — it was almost like a therapy for her.”

When Amy died, Nance and her mother, Susan Morris, found themselves at a loss. “Of course, I was left with a hole in my heart,” Nance says, “but I was also left with 300 dolls I had no idea what to do with.”

The two women joined a local doll collectors’ organization — the Rowan Doll Society of North Carolina — to learn more about the dolls, their value, how to preserve them, and what they might be able to do with them. That ultimately led to the museum’s opening in 2012, and the attraction has thrived. Nance says her sister would be humbled, but thrilled, to see what her doll collection has become.

“And every time somebody comes in the museum, we tell them Amy’s story,” points out museum administrator Kathy Gregg. “It keeps her memory alive, which is very important to us.”

You see? It’s a sweet, inspiring story that deserves to be told again and again. And yet …

And yet, as I stand before this army of Barbies, I find that my 51-year-old “every-guy” psyche can’t relate. I never played with Barbies — in fact, I’m sure I shunned Barbies, and all other dolls, as if they had cooties. I didn’t even have a sister who might’ve played with Barbies, which would have given Amy’s dolls at least a modicum of relevance for me. What, I’m wondering, does this place have for me?

And then I see him.

For every adult, there’s at least one toy that will always have the power to transport you back to your childhood, conjuring up memories of those days when playtime seemed endless. For Amy Morris, it was her dolls, which became her constant friends and helped her forget she had a disability.

For me? Well, for me, it’s G.I. Joe — and I’ve just spotted him at the Spencer Doll and Toy Museum.

You have to understand. When G.I. Joe was introduced in 1964 as “America’s moveable fighting man,” he captured the imagination of a generation of young boys who fancied themselves war heroes. Granted, we didn’t really understand anything about war. We didn’t care whether playing war was politically correct or not, nor did we care whether it was predisposing us to a lifetime of violence. All we knew and cared about was that G.I. Joe was the man. 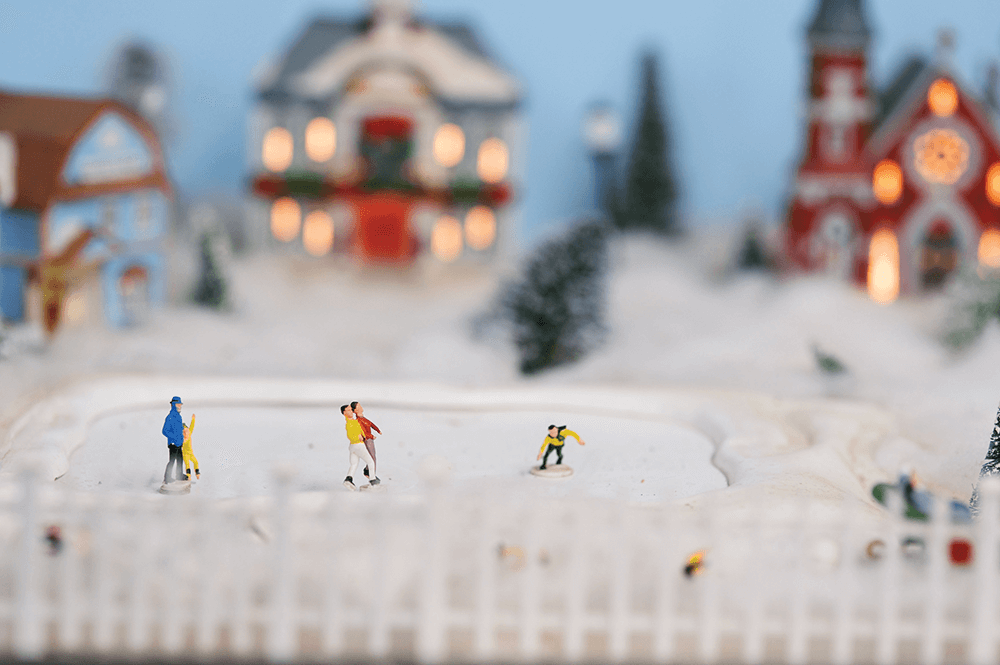 Never mind that we were essentially playing with dolls — complete with accessories like hats, guns, ammo belts, and canteens — just like all the little girls who were accessorizing their Barbies, which had been introduced a few years earlier. To us, G.I. Joes weren’t dolls — they were “action figures” — and one glance at the museum’s G.I. Joe exhibit resurrects my childhood. Suddenly, I’m 6 years old again, immersed in the action of a pretend war being fought on my bedroom floor decades ago.

Whatever your signature toy was — a Roy Rogers cap pistol, a Chatty Cathy doll, a Lionel train set — there’s a good chance you’ll find it, or something close to it, at the Spencer Doll and Toy Museum, because that’s a large part of what this place is about.

“We’re the memory-keepers, because we have things here that remind people of their childhood — and it’s always a happy memory,” Gregg says. “Maybe they’re reminded of a toy they had or played with when they were a child, or reminded of some event that’s brought up by toys. This is a place where we keep these items from the past, but we also have them here for future generations to appreciate.”

And with every toy, Gregg says, there’s a story that brings it to life. “I think that’s part of the charm of this place,” she says. “Yes, you can just go look around if you want, but we can tell you things about where these toys came from. People cared about these things, so they wrote their stories down. Or they gave them to us and told us their stories. Now, we tell the stories.”

Consider, for example, the museum’s extensive collection of Shirley Temple dolls and memorabilia, believed to be the East Coast’s largest Shirley Temple collection available for public viewing. The dolls range from the 1930s to the present day and belonged at one time to Marietta Forlaw of Greensboro.

Here is Angela Peterson’s large dollhouse, a replica of her childhood home in Parkersburg, West Virginia. Built in the 1970s, the replica of the 1912 home has three floors, including the attic. The removable roof allows you to see inside the dollhouse’s second story. “According to the late Mrs. Peterson, the house is furnished as she remembered it was when she grew up there,” Gregg says. “Even the wallpaper is as close to the original as possible.”

There’s the rare Schoenhut miniature Humpty-Dumpty Circus, too, which was considered a high-end toy when it was manufactured in the early 1900s. According to Gregg, it took Huntersville collectors Wayne and Helen Thomas — who loaned the circus to the museum — many years to amass all of the pieces for the miniature circus. For those seeking rare collectibles, this is the museum’s biggest don’t-miss exhibit. 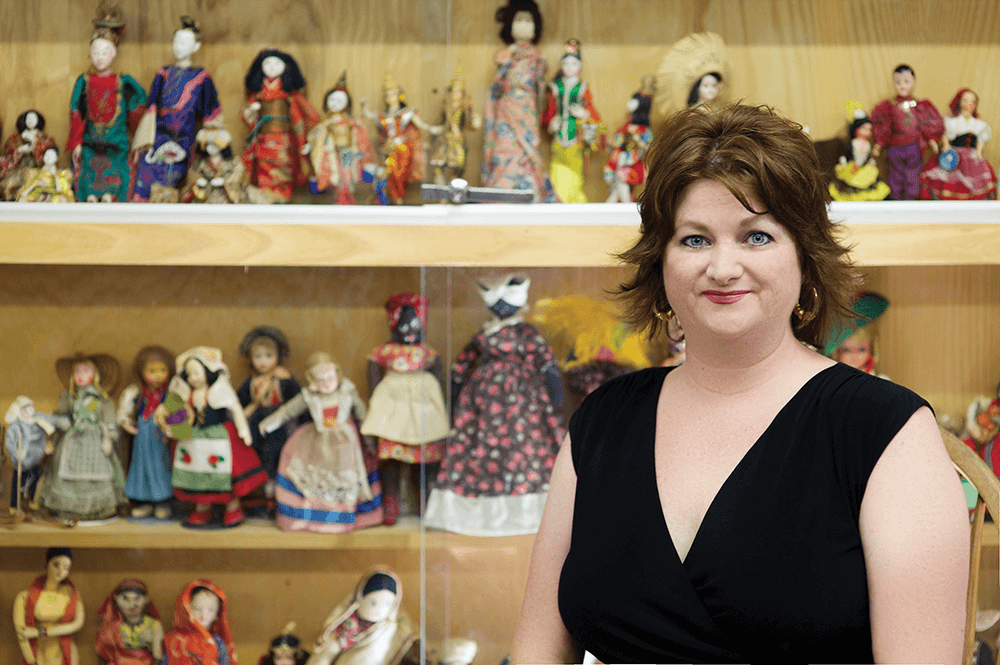 Whatever your age, the Doll and Toy Museum in Spencer probably has the toy you cherished. Amy’s sister, Beth Morris Nance, knows the stories behind the toys, including the saga of “the sad German rag doll,” owned by a child of Nazi sympathizers. photograph by Elizabeth Glessner

One of Gregg’s favorite toys is a doll she calls “the sad German rag doll,” whose history can be traced to World War II Germany.

The story is that when Allied forces reached Germany near the end of the war, many Germans fled their homes with few possessions. Apparently, a German child left this 14-inch-tall cloth doll on the floor of a school attended by children of Nazi sympathizers. A young soldier from Rowan County found the doll, brought it home to Salisbury, and gave it to a doll collector. Eventually, her collection — including the German rag doll — was donated to the museum.

“This doll doesn’t look like a lot,” Gregg says, “but when you know its story, all of a sudden he becomes very special. We have a lot of dolls here that are worth nothing monetarily, but who have a story. They have sentimental value.”

Amy’s Barbies. My beloved G.I. Joe. Even the sad German rag doll. Sentimental value is worth nothing, yet is simultaneously priceless. Here at the museum, their expressions, and accessories — and yes, the stories behind them — remind us that while childhood joy may fade, the toys that claim our memories live on.