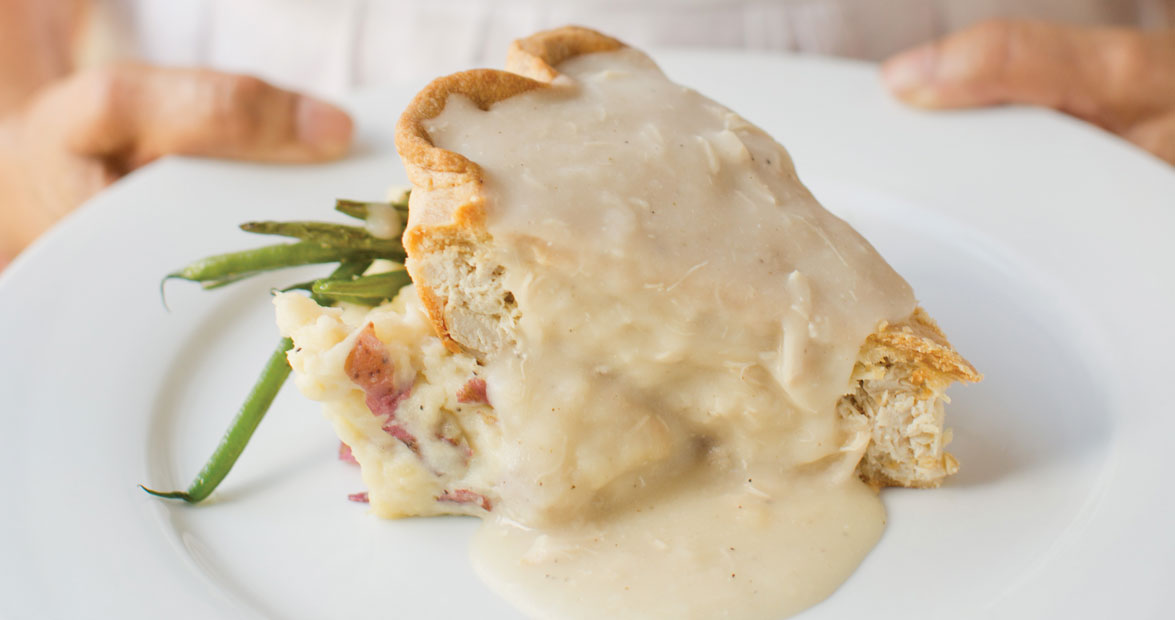 The Rev. Dr. C. Daniel Crews remembers having just one question about a building proposal at a Moravian church he once pastored: “I looked at it and said, ‘Don’t give me the cost in dollars. How many chicken pies is it going to cost per square foot?’ ”

Ever since chicken pie suppers and fund-raiser sales began showing up in Moravian newsletters around 1920, generations of pastors in the Winston-Salem area have asked the same question. When the offering plates return empty, chicken pie is a savior. It’s paid for remodeling countless church kitchens and fellowship halls.

“Chicken pie has been vital in the growth of Moravian facilities,” says Crews, who is an archivist at the Moravian Archives in Winston-Salem. “And getting together to make them is a social, spiritual time for a congregation.”

But unless you’ve lived in the chicken pie zone, you may not know about the dish. Among popular Moravian baked goods like paper-thin spice cookies and indulgent sugar cake, chicken pie is the unsung worker in the vineyard. To understand what it is, you first have to know what it’s not.

The most humble pie

As simple as a chicken pie sounds, people have definite ideas about its preparation.

“How to make chicken pie depends on who you ask, and every church and person who makes one has their own way, and that’s the right way,” says Mary Comer, a member of Hopewell Moravian Church in Winston-Salem. “My 90-year-old twin aunts, who were the chicken pie queens at my church, always said you had to use some chicken and some stewing hens, old hens.”

The whole-hen approach is probably closer to how chicken pie was originally prepared, says Joanna Roberts, assistant director of interpretation at Old Salem. For home cooks, chicken pie likely was a way to use up scraps of cooked meat, or was the final fate for unproductive laying hens. Meat pies are traditional in Great Britain and Europe, so it’s not a stretch to think that the early German Moravians brought the idea with them.

And chicken pies are not just popular with Moravian churches. At Kingswood United Methodist Church in Rural Hall, just outside Winston-Salem, the church organizes an army of volunteers for its chicken pie cook days.

Janice says the day starts at 5:30 a.m., when people begin preparing the chicken and making dough in the church kitchen.

By 8 a.m., the assembly line is set: bottom crust in pans; meat; butter, flour, salt, pepper, and broth added; crust placed on top and crimped to the bottom crust. The finished pies go in large freezers, and each one comes with an extra cup of broth to be made into gravy to top the pies when cooking them at home.

“The money has gone to new copiers, painting the outside of the church, a lot of capital improvements that are hard to budget for, and for emergencies,” Janice says.

Back at Hopewell Moravian, chicken pies have helped fund a better place to make the pies. “When we built the new Christian Life Center with a new kitchen, we only had to finance about a fourth of the price, we had that much money from chicken pies over the years,” Comer says.

Pie by the slice

Beyond churches and home cooks, chicken pie can be found at restaurants throughout Winston-Salem, including one spot that’s steeped in Moravian tradition: The Tavern in Old Salem.

When Jared Keiper became chef of the restaurant two and a half years ago, he knew that the ever-popular chicken pie would always be on the menu, but he wanted to give it a distinctly upscale flair.

“Traditional Moravian chicken pie, even though I like it, it can be a little bit dry,” Keiper says.

So his other addition was gravy, and lots of it. Besides using it in the pie’s filling, gravy tops each slice and is drizzled over a bed of red-skinned mashed potatoes and green beans.

But no matter what changes he makes, he won’t mess with one tradition: “No vegetables whatsoever. That’s one thing that makes it Moravian chicken pie.”

On the Chicken Pie Trail

Hungry? Satisfy your chicken pie craving at one of these Winston-Salem eateries.

Salem Kitchen
Salem Kitchen specializes in catering and to-go food, and its Moravian Chicken Pie is a best seller. Pick it up, or — running late? Feeling lazy? — have your pie, sized large or small, delivered. See if you can spot the cutout of a chicken that tops each pie, like the one above.

Mrs. Pumpkin’s
Originally started in Mrs. Pumpkin’s basement in 1985, this single-family operation expanded in 1993 into a small gourmet bakery that sells everything from wedding cakes to Moravian chicken pies. A mere five to six people assemble 800 pies at a time for fund-raisers.

Since its opening in 2008, Hutch & Harris has offered fine foods and updated versions of classics, including Moravian chicken pie. Their version is handmade, served atop mashed potatoes with sage gravy, the vegetable du jour on the side.