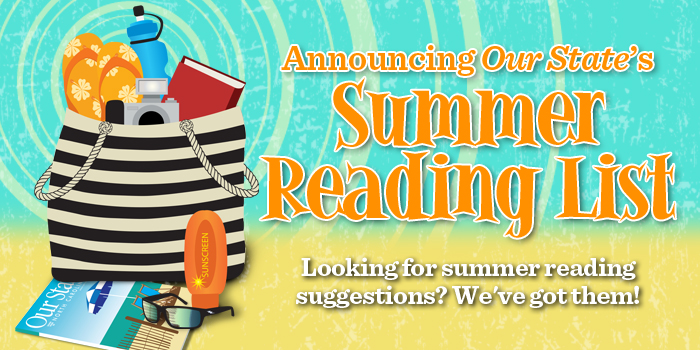 With Labor Day right around the corner, summer is coming to an end. This week, we share our last reading list. This list is a compilation of recommendations from Our State readers and staff.

Now You See Her by James Patterson and Michael Ledwidge
Lynn Tutterow, Our State magazine’s associate publisher, suggests one of her summer favorites. “It is a great summer read — a fast-paced thriller that explores how one bad decision can change the entire course of a life. Don’t start reading if you don’t have time to keep going!”

Nogales: A Memoir of Courage, Survival, and Escape by Stephen H. Wilson
Marsha Phillips of Craven County writes, “This book was written by a very good friend of mine who is now a retired North Carolina state employee who lives in Greenville. It is the true account of how Steve and his friend were wrongly imprisoned for 18 months in Mexico in 1973. It describes his time in the Mexico prisons as well as his escape back to the United States in 1974, after being tipped off by a guard that there were plans to kill him and make it look like an escape attempt.”

The Prudent Mariner by Leslie Walker Williams
Elizabeth Cook in Albemarle says, “I visited a friend in Savannah last fall, and she sent me home with a stack of books. My favorite was The Prudent Mariner by Leslie Walker Williams. It is Southern novel to the core and mixes mystery, strange and unusual characters, and history into a compelling story. The story begins in 1913 with a horrible lynching. This event comes home to roost 50 years later.”

Miracles Still Happen Today by Susanna Rodgers Simpson
Of her book, author Susanna Rodgers Simpson from Moore County says, “This book is filled with hope and encouragement. It is a collection of short stories that can be read a little at a time, and it is set right here in North Carolina and written by someone born and raised here.”

Unbroken: A World War II Story of Survival, Resilience, and Redemption by Lauren Hillenbrand
Cathy Kelly, Our State Store manager, shares one of her recent favorites. “I know, what’s a girl doing reading a World War II survival story? I was going on a long car trip by myself and needed some entertainment. I stood in front of the books on tape display at Cracker Barrel so long that it was embarrassing, so I picked this out in frustration.”

“Louis Zamperini is a mischievous troublemaker, growing up in pre-World War II New York, who eventually finds something worthy of his energy — competitive running. His talent and determination carried him to the Berlin Olympics to run his near-four-minute mile in front of Adolph Hitler. When the war started, he became an airman whose doomed flight led him on a fascinating yet brutal journey. Only his incredible ingenuity, resilience, and immense integrity saved him from a tragic end. I found it amazing just how much one person can endure — thirst, starvation, sharks, enemy aircraft, and eventually beatings and mind-numbing cruelty. Zamperini is not just a hero, his story is heroic.”

The Barefoot Sisters: Southbound by Lucy and Susan Letcher
Jerry Ann Gregory in Efland writes, “Even though I’m not a hiker, I thoroughly enjoyed this book. The adventures of the two sisters hiking the entire 2,175 miles of the Appalachian Trail barefoot is so entertaining and educational. The book made me want to travel the same areas. It is so well written that you feel like you are with them and seeing and meeting fellow hikers. I highly recommend it and have begun the second book Walking Home. My husband thoroughly enjoyed Southbound and is now waiting on me to finish the second book!”