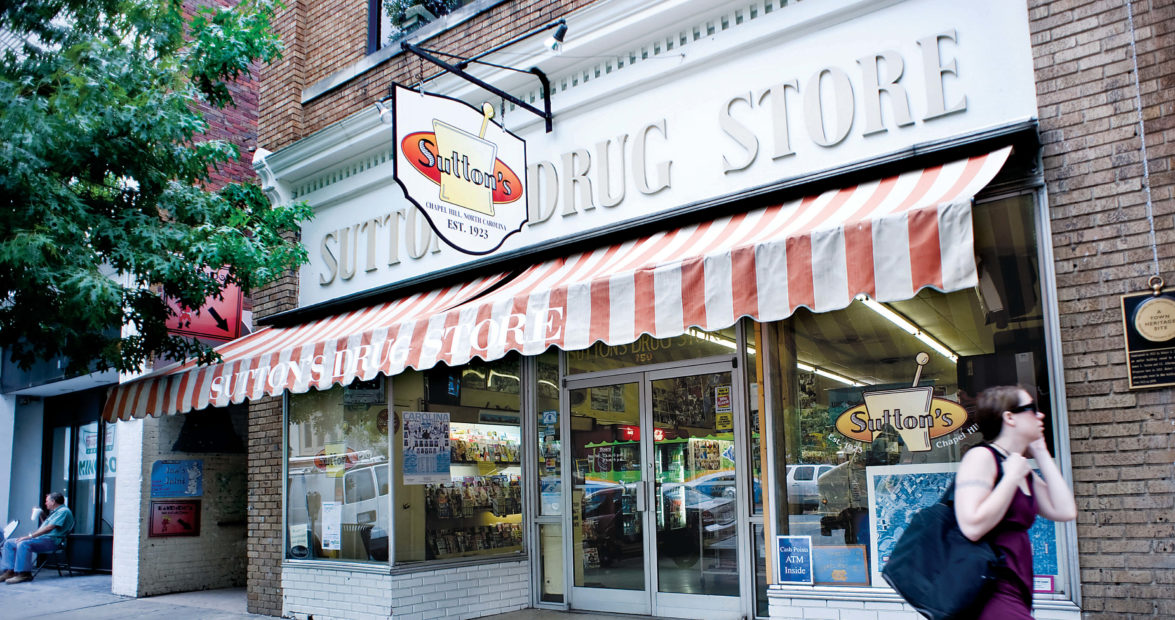 It’s a little boy’s dream — to move to Chapel Hill, suit up in Carolina blue, toe the free throw line in the Dean Dome, and say, “Yes, I’m a Tar Heel.”

Even if that little boy doesn’t quite reach six feet tall. Or finds his skills better suited to the junior varsity team. He can step into Sutton’s Drug Store in Chapel Hill and say, “Yes, I’m a Tar Heel.”

He can find his picture on the wall among such Tar Heel elites as Tyler Hansbrough, Michael Jordan, and Lennie Rosenbluth. He can sit on one of the old, squeaky barstools around the lunch counter, and he might even rub elbows or strike up a conversation with one of the legends.

Since 1923, Sutton’s Drug Store has occupied an old brick building — now designated “A Town Heritage Site” — on Franklin Street, just a few hundred feet from the grassy quad of the University of North Carolina at Chapel Hill’s north campus. It sits street level, between Players nightclub above and Bandido’s Mexican Cafe below. On pleasant fall days, its open glass doors beckon from underneath the orange-and-white-striped awning, inviting passersby to step in and step back in time.

Walk past the short aisles filled with college-town staples — energy drinks, candy bars, Solo cups, Skoal cans, and CliffsNotes — and you’ll find an anomaly in today’s world of generic, drive-through drugstores. There, in the back of the store, right beside the pharmacy, a grill sizzles as cooks fry hamburgers and customers eat and socialize at the counter, close enough to watch every detail of preparation that makes the food at Sutton’s taste just a little bit better.

“It’s amazing how many people come in here and say, ‘Why do they have a restaurant in a drugstore?’” manager Don Pinney says. “And I’m like, ‘Where have you been?’ There’s people my age who’ve never eaten in a drugstore.”
Pinney, 46, has a hard time getting over that fact. He’s been a part of Sutton’s since he was 13 years old, when he started helping clean up around the store. His father, Jan, worked in Sutton’s toy store downstairs, and his mother, Jean, worked at Sutton’s cosmetic counter.

Pinney has done it all at Sutton’s: cleaning, waiting on customers, cooking, and now managing. He learned his cooking skills from a Sutton’s staple, Willie Mae Houk, who made him grilled cheeses as a child. Pinney points to a bent frying pan mounted on the wall behind the counter.

Customers dine at the counter or at one of the red-and-yellow booths; seating maxes out at 60. The laminated menu lists items that remind you you’re in a Chapel Hill institution. There’s the Dean Dome Deluxe (chicken salad, Swiss cheese, lettuce, and spicy mustard) or My Blue Heaven (roast beef, Provolone cheese, lettuce, tomato, and mayonnaise). One of the best sellers is Roy’s Reuben with corned beef, Swiss cheese, sauerkraut, and Thousand Island dressing. Maybe it’s because people love corned beef, or maybe it’s that basketball coach Roy Williams’s way is the law of the land around here. But it’s the burgers that keep Sutton’s staff hopping.

“We’re really here for breakfast just to get prepared for lunch ’cause it takes a long time to patty up 300 hamburgers,” Pinney says, explaining that each one is precisely 6.2 ounces. And by lunchtime, the flattop grill is well seasoned, having soaked up 15 pounds worth of bacon flavor from the morning rush. Many restaurants slant their grill tops, so the grease runs into a trough. But Pinney keeps his level, so the grease cooks into the grill and then into the food. “We’ve had to replace the grill four times since I’ve been here,” he says. “We wear them out.”

Most days, hamburgers are the big draw, but this is Thursday — hot dog day — and the line stretches out the door. Every Tuesday and Thursday, $3.25 will get you two dogs and crinkle-cut fries — served in the signature red plastic basket lined with parchment paper.

Bill Hargrove walks up to the counter and doesn’t have to say a word. Waitress Hollie Brown knows that on Tuesdays and Thursdays Hargrove has the special, and any other day he’ll have grilled chicken. He sits at the counter as Brown pours his sweet tea — served with crushed ice.

“I’ve got a diet coach who’s really after me for eating this,” Hargrove says as he squirts a pile of ketchup beside his fries. Hargrove moved to Chapel Hill in 1973. Yes, Bill Hargrove is a Tar Heel. And his picture’s on the wall at Sutton’s to prove it. There he is, a retiree with gray hair and glasses. Pictures of Carolina athletes — guards Wes Miller and Ivory Latta and a booth full of football players — surround the smiling Hargrove.

Owner John Woodard, 66, started taking customers’ pictures in 1983. Houk suggested framing some 8-by-10-inch photographs Woodard had and hanging them on the wall to decorate a blank spot above the booths. The idea took off.

“The day we hung them up on the wall, when people started coming in for lunch, and every day after that, people started asking, ‘Hey, how do we get our picture on the wall?’” Woodard says. “I didn’t have to advertise any more.”

Instead, he takes customers’ pictures and hangs them on the wall. The patrons then invite friends to come see their photos at Sutton’s. Naturally, they’ll also have lunch.

“It makes them feel like they’re part of the Sutton’s family,” Woodard says. And that’s been one of Woodard’s goals since he bought the store in 1977.

Photos now cover every surface available. They hang on poster board from the ceiling. During the school semester, a TV in the store’s front window plays a slideshow of photos, so students can watch for their faces as they wait in line for the nightclub. Taking that first picture — a snapshot of the regular breakfast crowd gathered around the counter — and hanging it on the wall was one of the best things Woodard ever did for the business. Making Pinney manager was another smart move.

“He always tells everybody that I’m his adopted Dad,” Woodard says of Pinney. “He adopted me.”

Sutton’s is known more for its food than for the drugs, Woodard relents. Even though his customer service and personality behind the pharmacy counter mean a lot, he knows the lunch counter, under Pinney’s lead, is the store’s main attraction. “People appreciate the fact that they can go get a hamburger and then get something for their cholesterol at the same place,” Woodard says.

Pinney seems in his element at the lunch counter’s most hectic moments. His eyes dance and his voice quickens as he describes Saturdays in October when Carolina’s football team is on the field in Kenan Stadium.

“It’s hustle and bustle at that point,” Pinney says. “It’s lively. It’s still warm enough we can leave the front doors open. It invites people in. … Can you imagine the radio going and 80, 90 people in this small area, bustling and talking and laughing? Sometimes we’ll get hysterical in here, and the whole place will just bust out laughing.” With only 1,800 square feet of space, Sutton’s swells with students and alumni.

Hollie Brown knows those days well. She’s been working at Sutton’s for two years. Wearing a Sutton’s T-shirt, shorts, and tennis shoes, Brown takes orders, runs the register, and makes milk shakes — sometimes doing all three at once. She reaches deep into the Universal ice cream freezer, scoops PET ice cream into metal cups, pours in whole milk and the desired goodies — syrup, fruit, or candy pieces — and mixes it together with the old-fashioned Hamilton Beach milk shake blender that’s been sitting on the same storage cabinet for 50 years.

“When it’s game days, there’s like five of us over here on this one side,” she says, motioning to the narrow opening behind the counter that’s barely wide enough for two employees to squeeze through. “There are five hands reaching for the drink machine. It’s crazy.”

It may be crazy, but Brown, just like the other staff members and regular customers, keeps coming back. “I don’t have any turnover,” Pinney says. “And the reason being, it’s fast paced, but the rewards are great. The people that come to Sutton’s are not uptight people. This is a perfect environment for a perfect type of customer — patient, understanding.”

Pinney is one of the reasons Casey Putnam, a senior at UNC, frequents Sutton’s three or four times a week. Pinney’s sure to shoot her a smile and stop by her seat to catch up. The affordable comfort food — just right for a student budget — also attracts Putnam. Her favorite: a corn dog with ketchup and mustard.

“This would be the one place I would bring my family,” Putnam says. “When I have people come visit, I always come here.”

The jerseys hanging from the ceiling reflect the connection. Basketball player Deon Thompson scribbled across his number 21 jersey, “Thanks for all the great food and memories! Sutton’s will always have a special place in my heart and stomach!”

Woodard and Pinney delight in second- and third-generation customers coming through the doors. “Recent students now will bring their kids in as babies and say, ‘OK, it’s time for their first Sutton’s burger.’ And they’ll buy them a little T-shirt,” Pinney says.

A copy of the April 7, 2009, front page of the student newspaper, The Daily Tar Heel, hangs above the cash register. It was the day after UNC won its fifth NCAA Men’s Basketball Championship. The headline reads, “A Legacy Fulfilled.” It’s a fitting headline for Sutton’s, too. Woodard hopes Sutton’s legacy will continue in Chapel Hill for many generations of Tar Heels to come.

When Woodard bought the store, the previous owner had one request. “He said, ‘The only thing I ask of you is when you sell the store, you do the same thing that I’m doing with you. Find a young man that wants to run his own store, so we can keep the independently owned tradition going on Franklin Street,’” Woodard says.

With Pinney poised to step up, that’s exactly what will happen. And it will be one boy’s dream come true.