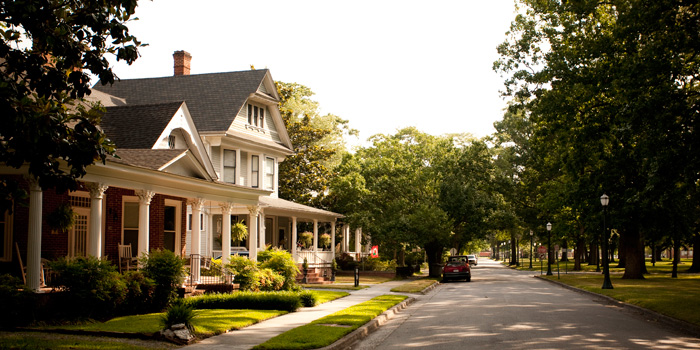 Editor’s Note: This story was originally published in August 2010

Reminders of the Great Flood of 1999 remain in Catherine Williams’s sitting room.

Perched on side tables flanking her couch, two green lamps that belonged to her mother look normal and still turn on. But upon peering closer, the brass trim looks a little off. Dark blotches of tarnish dot the metal rim.

Everything else was junked after Hurricane Floyd’s floodwaters filled her brick home in this east Tarboro neighborhood.

“The whole house was completely muddy, mildewed. All the furniture was upside down,” says Williams, a former bookkeeper who grew up in the family house before moving to New York City after high school.

Outside, on the surface, Tarboro doesn’t show many signs of the flood anymore.

But inside, in the homes and hearts, the remnants are scattered in a box of saved newspaper clippings, on a law office wall where a decal shows how high the water reached, or, for Williams, on the side tables.

Williams was living in New York when the storm hit. But she had kept the house in Tarboro after her parents died, hoping to one day retire in this small, eastern North Carolina town.

Inside, the water reached six feet high. The house had to be gutted and the appliances and furnishings given up.

“I saved two lamps to remember the flood,” says Williams. “I didn’t want to throw them away.”

Despite the fact that the home had to be stripped down to the frame, Williams had no doubt about starting again from the skeleton out.

“This is a family home,” she says. “I knew one day I planned to come live here.

Today, Tarboro looks like many other old Southern towns. Homes from the 18th and 19th centuries and meandering sidewalks spread from its center, past magnolia and dogwood trees.

Eleven years ago, it was a soggy mess.

As Hurricane Floyd approached in mid-September, Tarboro and the rest of the state braced for what was expected to be a massive storm.

Although weaker than originally feared when it made landfall, Floyd’s winds still ripped down trees and electrical poles in Tarboro.
But it’s not the wind that people still talk about. It’s the water that dumped down and slowly crept up for days, eventually filling up buildings downtown and submerging the neighboring town of Princeville.

The ground, already soaked from Hurricane Dennis weeks earlier, was like a full sponge.
“I was sitting out here on a nice, beautiful, sunny Friday,” says Rusty Holderness, recalling the day after Floyd swept through. “We were cooking, grilling hamburgers, and then they started talking about the water rising.”

Holderness went down to prepare his wife’s store, a gift shop named Rusty’s in the town’s historic district.

“We went down there, picked everything up, putting things on tables, thinking that was going to be the extent of it,” he says, shaking his head with the perspective of hindsight. “It kept rising, rising. It was pretty weather, sunny, and it kept rising.”

His wife, Mary Ann, was out of town visiting family. By the time she made it back after the weekend, water had seeped up through the basement and reached more than three feet up.

Her merchandise, along with the tables it was piled on for refuge, floated around.
The Tar River — the very lifeline that first drew settlements to the Tarboro area in the early 1700s — crested 24 feet above flood stage in Floyd’s wake.

On the Princeville side of the river, the water breached a levee and took over the entire town. All the homes, many of which floated away off their foundations, were destroyed, and town officials held a vote on whether to close everything and move to higher ground. In part because of its history, they decided to rebuild Princeville, the nation’s oldest town incorporated by freed slaves after the Civil War.

In Tarboro, which slopes up from the river and had never had significant flooding before, water filled at least half the buildings downtown.

Surveying the damage in the eastern part of the state, then-president Bill Clinton stopped outside of Tarboro’s storefronts days after the storm and spoke of recovery.

In one photo of the aftermath, an office supply store owner stands on sandbags, pumping water away from her front door as a boat floats by on Main Street.

There was no pumping possible for Mary Ann’s store, located on the end of the street closer to the swollen river.

After 27 years in business, she nearly shut everything down.

But there was still a supply of undamaged Christmas merchandise stored upstairs and the future of downtown to consider.

“We had all that stuff, so we just got busy cleaning,” Mary Ann says. “Once you have something going and then have to close things, that’s discouraging to everyone else.”

A chance for renewal

Like Mary Ann, other Main Street business owners began to pick up the waterlogged pieces and restart.

In fact, after the water withdrew, residents went about making the town better than it was before Floyd swept into their lives.

“Before the flood, downtown was like a lot of downtowns. It was mostly empty. There were a lot of buildings in blight situations,” says Mary Haviland, who has lived in Tarboro for 13 years. “The flood gave a lot of people a wake-up call. We had to do this clean-up anyway. It made us take action.”

One of them, dating back to 1907, is the Bridgers building. It originally housed the offices for East Carolina Railroad founder Henry Clark Bridgers Sr.

Before the flood even made a mark, the building was an eyesore with boarded-up windows and home to hundreds of squatting pigeons.

Now, it holds stores, a coffee shop, and connects to renovated apartments where both young professionals and retirees live in lofts. The renewal spread from there.

“Because we did that, other folks took on some other projects,” Haviland says, pointing out a 1919 movie house that the Rotary Club is renovating.

Flood or no flood, renovation is a big deal in Tarboro, the county seat for Edgecombe County, about 20 minutes east of Rocky Mount.

Wooden plaques with dates and names of early owners hang on nearly every house and business in the town’s historic district — one of the largest in the state, covering 45 blocks.

Despite the flooding in the historic storefronts downtown, none of the old homes in the district’s residential section suffered damage.
Driving around the neighborhood streets, Haviland prattles off homes in various stages of restoration.

“Here’s one in progress,” she says, motioning to a home owned by a local doctor. “He put a beautiful copper roof on the porch.”

“This,” she moves on, “has been recently redone. A couple from Winston-Salem bought that one.”

Haviland lives in one of the stately Victorian homes that line the north side of the Town Common, a green swath of park laid out when the town was chartered in 1760.
Tarboro’s homes are a buffet of centuries-old styles, creating a display of architectural fashions of the past.

Federal-style homes dating from the late 1790s mingle with gingerbread-trimmed Victorians and Arts and Crafts bungalows from the 1930s.

“There is an effort to try and save as much as we can of the architecturally historic buildings,” says Monika Fleming, director of the historic preservation program at Edgecombe Community College. “We’re lucky that we have saved so many of them. Not too many towns can claim to have that many buildings still in use.”

Fleming, who lives in Tarboro and leads walking tours on the weekends, says the town’s small size is one reason it has been able to preserve its history.

“It’s a great walking town,” says Denise Sanderson, who moved to Tarboro in 2006 with her husband to restore a late 1800s home into a bed and breakfast, named the Main Street Inn. “We do a lot of sitting on front porches.”

On the Main Street Inn’s long front porch, next to the rocking chairs, is the courting swing. “A hundred years ago, many of the young men would propose there,” Sanderson says.

For a town so conscious of history, the Great Flood of 1999 will remain in memories for some time.

Although the brown water marks have faded from the sun or been painted over, people still use the flood as a point of reference when trying to recall when someone moved or when a store opened.

“It’s always ‘before the flood’ or ‘after the flood,’ ” Rusty Holderness says.

And, Holderness adds, things look pretty good in the “after” chapter.

“I hope people think about what a great place it is now,” he says. “It’s just a wonderful place to live and raise a family. It’s a unique place. I hope that’s what sticks with people.”

Vicky Eckenrode lives in Wilmington where she works as a reporter for the StarNews.