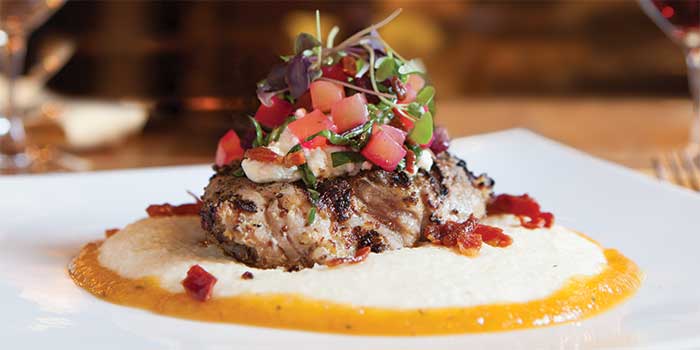 Sit in a rocking chair on the front porch of the 1861 Farmhouse Restaurant in Valle Crucis and you’ll get it. You’ll understand why restaurateurs and chefs come here, to the northwest corner of North Carolina, to endeavor the difficult business of fine dining.

From your seat, you see a mountain in the distance. Your eyes trace its outline, rising and falling, against a backdrop of sky. You see how the mountain pushes up behind the original Mast General Store, where visitors stream out of the front door, glass-bottled Cheerwines in hand. Some of those visitors climb into their cars, shoot across N.C. Highway 194, and begin ascending a hill toward where you’re sitting. They pull into a gravel parking lot, walk up the steps of the restored Victorian that houses 1861, cross its porch, and step inside to be seated. They’re here seeking a meal. But, if we’re being honest, they’re here looking for more than food.

Visitors come to North Carolina’s High Country expecting to experience, if only temporarily, a lifestyle that’s rejuvenating. They leave Charlotte and Raleigh behind and head for places perched higher than the tallest buildings in either of those cities — places such as Boone, Blowing Rock, and Valle Crucis. Towns where the landscape is different from anything back home and where the people include new faces.

Alison Garrett and her husband, Steve, drove past the Hard Taylor House in Valle Crucis several times before they got up the nerve to pull in the driveway and peek in a window. They spotted it for the first time while their oldest son was attending college at Appalachian State University in nearby Boone. The house was beautiful, they thought, settled as it is in a quiet hamlet. But it needed a lot of work.

Still, the Garretts fell in love with Valle Crucis, where they eventually built a summer home. And later, unable to think of a good reason not to stay there year-round, they became full-time residents. That’s when they got serious about purchasing and renovating the Hard Taylor House. They began researching its past, considering its potential.

“We read all we could about the home’s construction and knew it had a really special story,” Alison says.

That story starts with its previous residents, who were influential in the development of Valle Crucis. Henry Taylor, the same man who built the Mast General Store across the road in the early 1880s, built the house in 1861. Well, actually, he built a two-room brick house that his son, Thomas “Hard” Taylor, later added nearly 5,000 square feet to. Think of it as a house within a house because that’s what it is.

In the original part, where Henry hand-laid bricks himself, Alison and Steve had to tear through layers of wallpaper, plaster, and drywall before finally exposing the brick walls. They refurbished the home’s hemlock wood floors, too. The list could go on, but in all, the Garretts spent two years working on the house before introducing it to diners as 1861 Farmhouse Restaurant in 2010.

Hearing Alison talk about it, the project was a significant investment in money, time, and emotion. “But it worked out, and I really feel like this is where my family’s meant to be,” she says.

If the High Country is a calling, then Jimmy Crippen received his when he was 29 years old. Although he grew up in Florida, Crippen often spent summers in Boone, where his family owned a farm. As time passed, he developed an affection for the place, the High Country.

He found the town of Blowing Rock particularly appealing. “Blowing Rock has always been a place of refuge and inspiration for the soul,” he says.

So he moved there in 1994 to open Crippen’s Country Inn and Restaurant.

Located in an iconic blue house on Sunset Drive, the restaurant replaced the Sunshine Inn, which Crippen equates to Blowing Rock’s version of the Dan’l Boone Inn and Restaurant. That is to say, a country-cooking haven. “The Sunshine Inn reached the soul of a lot of people’s palates,” he says, “because at our core, most of us love the familiar foods we grew up on.”

Crippen envisioned serving food more experimental and creative than what Sunshine’s regulars were used to. When he opened his restaurant, he knew he was taking a risk. “Understand, more complex plates don’t always square with what people want,” he says.

But understand, too, that Crippen is charismatic and hopeful. If anyone could make a successful push for upscale dining in a mountain town, it’s him. And he did just that at Crippen’s for 18 years, in which time he worked like a preacher to convert casual customers into reliable patrons.

The restaurant closed this past January to allow Crippen to focus on a new project, Competition Dining Series. The head-to-head chef’s challenge travels the state, inviting restaurants to compete in single-elimination battles, cooking with North Carolina-sourced ingredients, until one champion chef is chosen in each of five regions. Crippen came up with the idea several years ago and first introduced it in the High Country in Blowing Rock. He’s emceed every Competition Dining event since.

The venue helps Crippen spread the good word about North Carolina food, the restaurants that serve it, and the chefs who cook it.

Chefs from 1861 Farmhouse have competed before, and this year’s champion from the Blowing Rock series was Sam Ratchford from Vidalia, a restaurant in downtown Boone.

“Sam’s restaurant is just a few blocks west of the very traditional food served at the Dan’l Boone Inn,” Crippen says. “But look, the two get along! He’s generating a lot of excitement and bringing fresh blood to the culinary scene.”

Because Crippen is a promoter of great food in the state, his cell phone contains the number of almost every great chef and restaurateur here. He can immediately find Ken Gordon’s number, for instance. Ken and his wife, Wendy, own The Gamekeeper restaurant — the only AAA Four Diamond-rated restaurant in the High Country, and one of only 14 in North Carolina.

Facing bleak employment prospects, however, they moved around the state to gain restaurant experience. They stopped at places such as the former J. Basul Noble’s in High Point, where they worked for about 8 years. While there, Ken applied to culinary school — a dream of his. He only needed a letter of recommendation to get in. But when he asked the restaurant’s owner, Jim Noble, if he’d write it, Noble persuaded Ken not to spend money on formal culinary training.

“Jim said, ‘You’re only going to get in debt. Stay here and I’ll teach you everything you need to know,’ ” Ken says. So he studied culinary books by night and picked the minds of the kitchen staff during the day. All that knowledge prepared the Gordons to return to Boone, where they purchased The Gamekeeper in 2000.

Open since 1987 under a previous owner, the restaurant evolved under Ken and Wendy’s stewardship. Game proteins became the centerpiece of the menu, including wild boar, bison, venison, and rabbit.

“Wendy and I worked hard to create a menu that’s indigenous to the High Country,” Ken says. “We want people to come eat here and feel connected to the place.”

About 10 years elapsed between the Gordons’ departure from, and their return to, the High Country, where they’ve always felt most at home. Now they own a restaurant here, yes, but as it happens, their restaurant is a piece of regional history, too.

The 1950s stone cottage that houses The Gamekeeper was once the residence of the founders of Camp Yonahlossee, the oldest camp for girls in North Carolina until it closed in the late 1980s. Today, Ken and Wendy find themselves its curators.

Similar to the Garretts of 1861 Farmhouse, they’re concerned with preserving a place because of what it means to the High Country’s culture.

Whether a product of providence or coincidence, it seems that culture is being shaped by the hands of the people who love it here, among them, Jimmy Crippen, who remains one of the region’s biggest advocates. To anyone who’ll listen, he promotes the new restaurant that recently opened in the former home of Crippen’s — the New Public House and Hotel.

That restaurant means a lot to him. He knows the chef, Michael Foreman, who helped open it. Foreman is well-known for his other restaurant in Blowing Rock, Bistro Roca, which is located inside a building that also houses the historic Antlers Bar — the oldest continuously serving bar in North Carolina.

The night Foreman won, he stood with Crippen and accepted his prize inside the same building that had previously been the Sunshine Inn, which was still, at that time, Crippen’s Country Inn, and which would become the New Public House and Hotel.

Foreman stood inside a building that’s home to a restaurant, where the dishes served are evidence of the evolution of cooking in the High Country. A restaurant which visitors will come to when they seek to recharge, wanting to share in the lifestyle that attracts the brightest culinary minds.

831 West King Street, Boone
Since Chef Sam Ratchford and his wife, Alyce, opened Vidalia downtown, epicurean folks have only had good things to say. They love the burger topped with two giant Vidalia onion rings and other dishes, including the heirloom tomato salad pictured here.

143 Wonderland Trail, Blowing Rock
There’s a woodpile out back, but don’t mistake this place for a barbecue joint. Sous-chef Seth Parker uses the wood to fuel an oven. And that oven cooks pizzas topped with everything from heirloom tomatoes to goat cheese and guacamole. Pictured here is the restaurant’s lobster and crab cakes dish.

Jeffrey Turner enjoyed some of the High Country’s finest food for this story. He ate a fancy plate of ostrich at The Gamekeeper, and a simple, but delicious, pimento cheese sandwich at 1861 Farmhouse. He is an assistant editor at Our State. His most recent stories for the magazine include “Keeping the Harvest” (September 2013) and “The Church Cookbook” (April 2013).