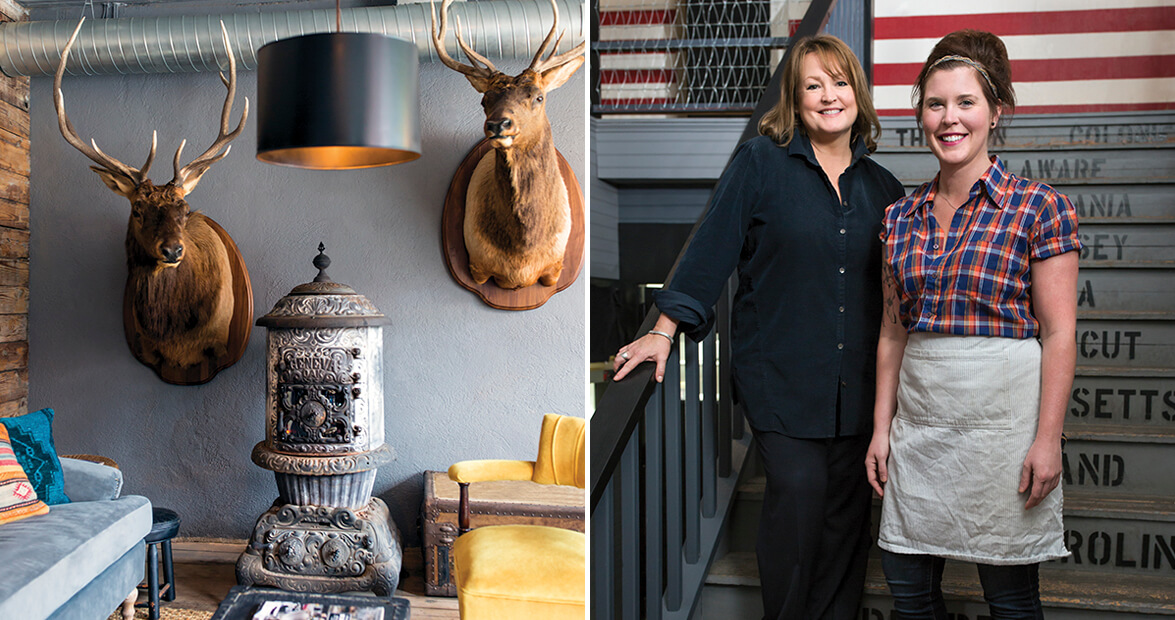 If you don’t know much about Halifax today, you would have, 240 years ago.

The northeastern North Carolina town was a key player in the American Revolution, as the first province to formally advocate for independence from England. Situated on the Roanoke River, it was also a significant shipping port, filled with busy taverns and a cosmopolitan community.

But as rivers made way for railroads, and railroads made way for highways, Halifax began to lose its shine. People moved away. Businesses shut down. Although the county courthouse and historic site kept Halifax running, by the start of the present century, few businesses remained.

And then Glenn Patterson Wilson moved back home.

“I had been saying to myself for a long time, ‘Somebody better do something. Why isn’t anybody doing anything?’” Wilson says.

Then she realized the answer. “I need to do something,” she says.

Wilson couldn’t decide between two for-sale buildings on South King Street — Halifax’s main road — so one weekend, she bought both. Shortly after, she purchased another one nearby, which she has since turned into an antiques store. 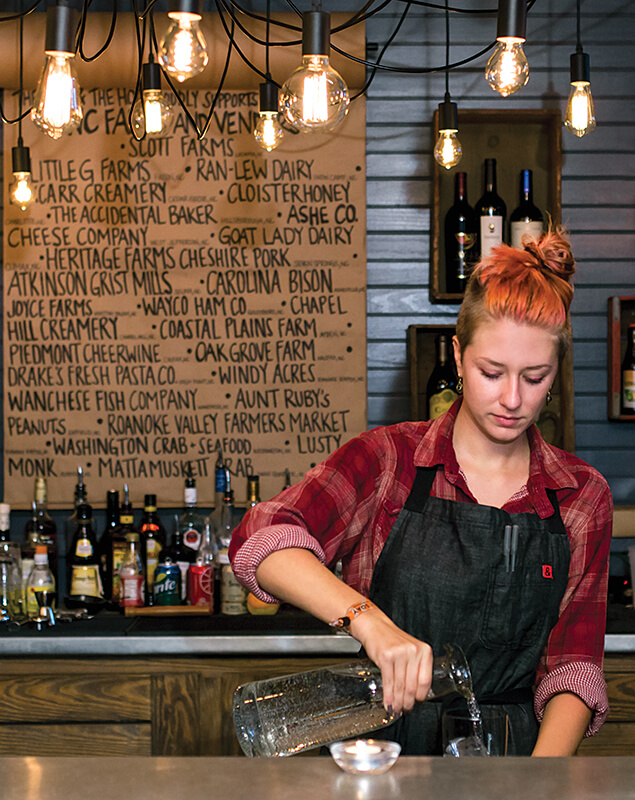 The last time Wilson lived here was decades ago. Where others see boarded-up businesses, she sees memories: rushing into the candy shop as a child, shopping at the grocery store with her mother. She worked at the historic site as a first job, which ultimately ignited her passion for preservation.

Wilson’s education led her away from North Carolina. She studied fine arts and interior design in England, then secured a job with Marriott, where she’s worked ever since, and is now a vice president of Global Design Services. Remotely, that is.

In the summer of 2015, Wilson also took on the unofficial role of town matriarch, and is leading her own revolution. While she has several revitalization projects in the works, it is the first that’s generating enough buzz to put cicadas to shame: The Hen & The Hog.

“A restaurant grounds the community,” Wilson says. “We are very fortunate that our little downtown looks the way it did in 1915.” When she smiles, a little proudly, it becomes evident why Wilson detoured from a successful career into risky entrepreneurship. It wasn’t for money or recognition. It was for Halifax.

It is familiar in ingredients but daring in combinations, classic in technique but modern in plating.

One step into The Hen & The Hog, and save starts to sound like an understatement. The two-story space is vast and vibrant, with modern Americana decor, evoking the time period when Halifax originally thrived. It’s clear how Wilson established such a prosperous career in design, though if you ask her, she shrugs off the credit. “I tried my best to keep as many details as I could,” she says. “Not to change it, just to enhance it.”

Indeed, The Hen & The Hog is full of little treasures that Wilson discovered when she renovated the location, which previously housed a hardware store: the potbelly stove in the foyer; the three mural-size American flags painted by servicemen for the country’s bicentennial; the staircase, with the 13 colonies inscribed on each step. Even the floors, which serenade you as you walk to your table.

“I was told I have to fix the creaks,” Wilson says. “But I like the creaks.”

There was just one small matter beyond Wilson’s expertise: the food.

Chelsi Hogue is holding a serrated knife and staring at a biscuit. It’s late afternoon, and the amuse-bouche for tonight’s dinner service is still to be determined. Then, it clicks: strawberry-thyme jam, miso butter (“miso from Asheville,” she notes), and a few big flakes of sea salt from the Outer Banks.

In many ways, it is Hogue herself on a plate. Her culinary approach, in her own words, falls somewhere between “whatever the hell I want” and “edgy, progressive Southern comfort.” It is familiar in ingredients but daring in combinations, classic in technique but modern in plating. It is curated, polished, and proud fine dining in what WRAL had called “a veritable ghost town” just before The Hen & The Hog opened in September of 2015. Yet, in such a food-focused, digitally connected age, the if you build it, they will come restaurant concept has never been more relevant, or more successful. From Vivian Howard’s Chef & The Farmer in Kinston, to Magnus Nilsson’s Fäviken in Sweden, foodies are increasingly willing to go increasingly far for a great meal.

And Hogue knows how to cook one.

But in Hogue’s case, her menu is also distinctly Southern in its sources, as well as its soul. Hogue has lived in North Carolina since she was 4, and she’s lived all over it, too — Raleigh, Asheville, Charlotte, Greensboro, Goldsboro, and more. “I know this state inside and out,” she says. “And every corner of it is awesome. I love it.” The food says as much, too. Grilled chicken on charred skewers, with goat cheese grits and smoked corn relish. A juicy pork chop with pimento cheese cornbread, jalapeño chowchow, and bourbon jus. Ice cream with a sugared hush puppy. 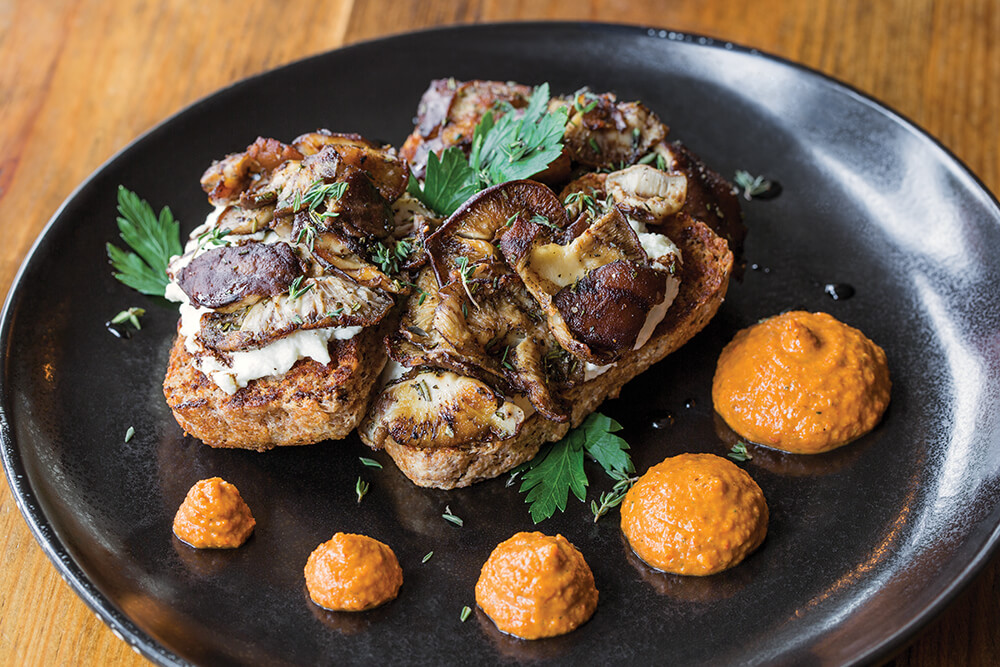 Behind the bar at The Hen & The Hog, there is a handwritten list on oversize craft paper, sharing the 20-plus North Carolina farms and vendors supported by the restaurant, from Ran-Lew Dairy in Snow Camp, to Atkinson Milling Co. in Selma, to The Accidental Baker in Hillsborough.

Hogue’s customers hail from all over the state, too. She is after food hounds, understanding that The Hen & The Hog depends on them.

“We knew that if we built this, it would take time,” she says. “There are days that I’ve walked out of this restaurant in tears, thinking, ‘What am I doing this for?’ But then there are days that I think: ‘OK. I’m going to slay the beast.’”

If Wilson’s revitalization efforts have a most devout supporter, it’s Hogue. “If we do it right, they will find us.”

Just over a year in, Wilson’s work is paying off. More and more entrepreneurs and investors are looking at downtown Halifax. The buildings are, as Wilson had hoped, opening their eyes, stretching, and coming back to life.