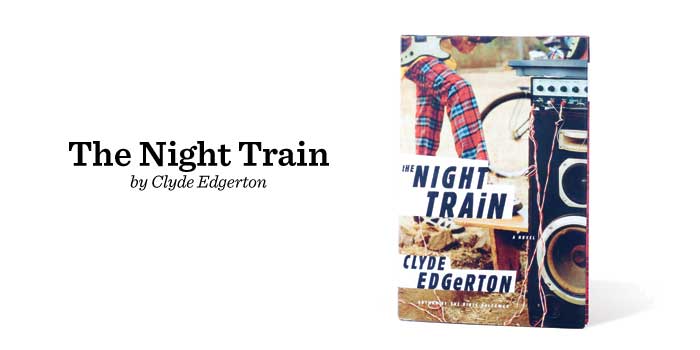 Set in 1963, The Night Train tells the story of two teenage boys, Dwayne Hallston and Larry Lime, who strike up a casual, interracial friendship. In Clyde Edgerton’s fictional small town of Starke, North Carolina, workplace relationships among lower-class blacks and whites are part of the everyday landscape, but they retreat to homes on opposite sides of the tracks at day’s end: whites to east Starke, blacks to west Starke. A friendship that goes beyond strictly defined boundaries of geography and social propriety is unusual, and when it comes to light late in the book — via a comical fender bender at a drive-in theater — some see it as unacceptable and even scandalous.

There’s an even bigger shock awaiting the townsfolk when Hallston introduces black music — specifically the charismatic soul of James Brown — into the repertoire of his band the Amazing Rumblers. He is this novel’s hero for moving beyond prejudice with a few small but significant steps illustrative of changing times, even in places like Starke. The Night Train also shows how some irresistibly funky music broke down racial barriers, especially among the young. Lime helps his white friend understand and negotiate these new rhythms while he learns the ropes as a jazz and soul musician from an older mentor nicknamed The Bleeder.

Edgerton’s book moseys at a carefree pace, much like the lives of his characters during simpler times. There’s a wonderful description of teenagers hanging out in a parking lot, trying to guess the makes, models, and years of cars passing by. In another scene, Hallston and Lime head to a pond to go noodling or trapping catfish in hollow logs. They don’t catch anything, but it’s the fact they went out together that matters.

His characters aren’t cardboard racists or visionary heroes. The book doesn’t turn on dramatic, pulse-quickening events. With its even-tempered cast, The Night Train illuminates that year when the generational cycle of racism began to slowly break down to the soulful beat of a new kind of music.

For more information on Clyde Edgerton, read Literary Harmony, which appeared originally with this book review.