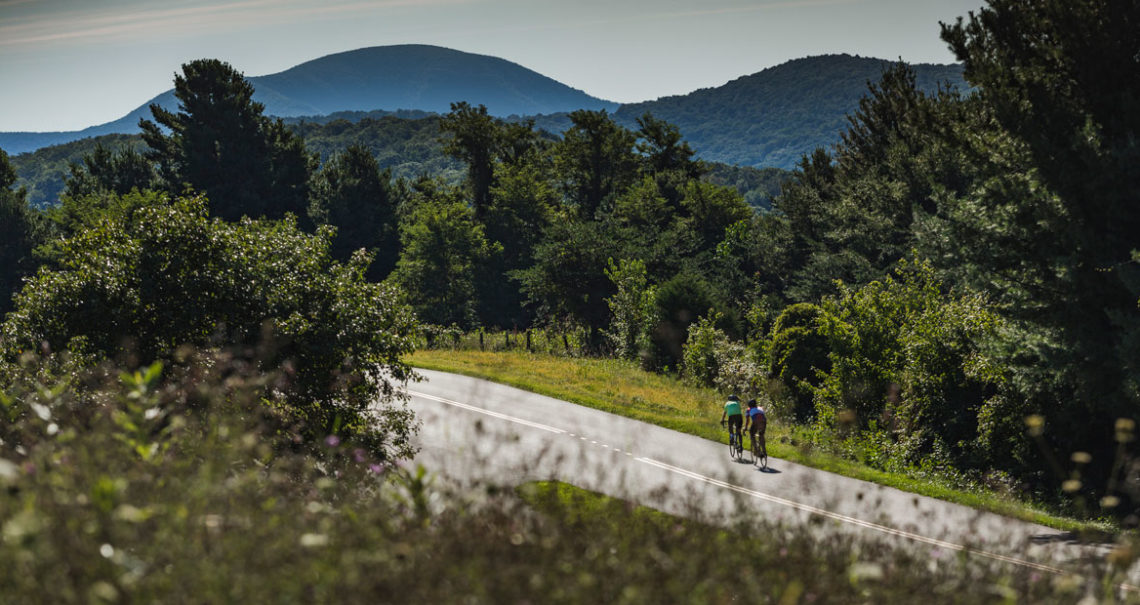 Each May, hundreds of cyclists from across the United States descend on Lynchburg, Virginia, for the Storming of Thunder Ridge event. But Roger Sorensen, who has traveled from Washington, D.C., to participate in the 100-mile segment for three years in a row, doesn’t consider it a race. “For me, it’s a fun, challenging bike ride,” he says. The best part? “The landscape. I do push my limits on the bicycle at times, but I love seeing all the spring growth along the rolling hills in this part of the Blue Ridge Mountains.”

Cyclists can follow that 100-mile course that includes an ascent to Apple Orchard Mountain, the highest peak along Virginia’s Blue Ridge Parkway. Or they can choose the 27- and 45-mile segments through rolling hills and meandering back roads. There’s even a 49-mile mountain-only loop.

But Lynchburg’s natural treasures aren’t just for cyclists. Whether you’re exploring on two wheels, two feet, or by kayak on the James River, there are plenty of ways to get outdoors.

This is Lynchburg, Virginia

Switch gears and ride the shaded paths and creeksides of Lynchburg’s 40 miles of urban trails, stopping to refuel with tasty chef-inspired fare or sipping our locally brewed goodness. Come see why our local adventurers love this city so much. 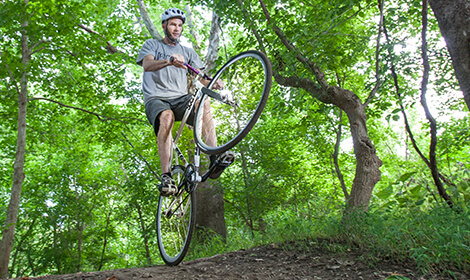 Glide down the James River

Just across the James River from downtown Lynchburg, the folks at James River Adventures have a mission: “We want to share this natural resource with as many people as possible,” says Rob Campbell, a community conservationist with the James River Association. “Our mantra is: if people can enjoy spending time in this environment, they’ll want to protect it.”

Between 9 a.m. and 1 p.m., James River Adventures’ naturalists help their guests explore the James River on kayaks and canoes. “From the shores of downtown all the way down to just west of Richmond is about a 9-mile paddle,” Campbell says. “We consider this the ‘Middle James.’ After you pass through town, you’ll see the iconic, bucolic river-bottom views with lots of wildlife and the mountains in the background.”

The journey can take as few as two-and-a-half hours or as many as five. “A lot of people pack a lunch and make a day of it,” Campbell says. “As the water drops down, there are some nice, sandy beaches, and there are great places to rest, gather your thoughts, and enjoy the beautiful views.”

At the end, James River Adventures’ shuttle swoops up paddlers and their boats and gives them a ride back to their car. To be sure they’ll have kayaks and canoes ready for you, Campbell suggests calling ahead to reserve your vessel.

Year-round, you can feel the adrenaline surge of zipping downhill at the Liberty Mountain Snowflex Centre. Guests of all skill levels can take advantage of the park’s skiing, snowboarding, and tubing experiences from its perch on Candlers Mountain Road.

After check-in, head over to the beginner slope to get the feel for “snowflex,” the artificial turf-like snow surface — or schedule a quick lesson with one of the instructors. Once you get the hang of it, there’ll be no stopping you. Unless, of course, you’re ready for hot chocolate and a pastry, served at the lodge. 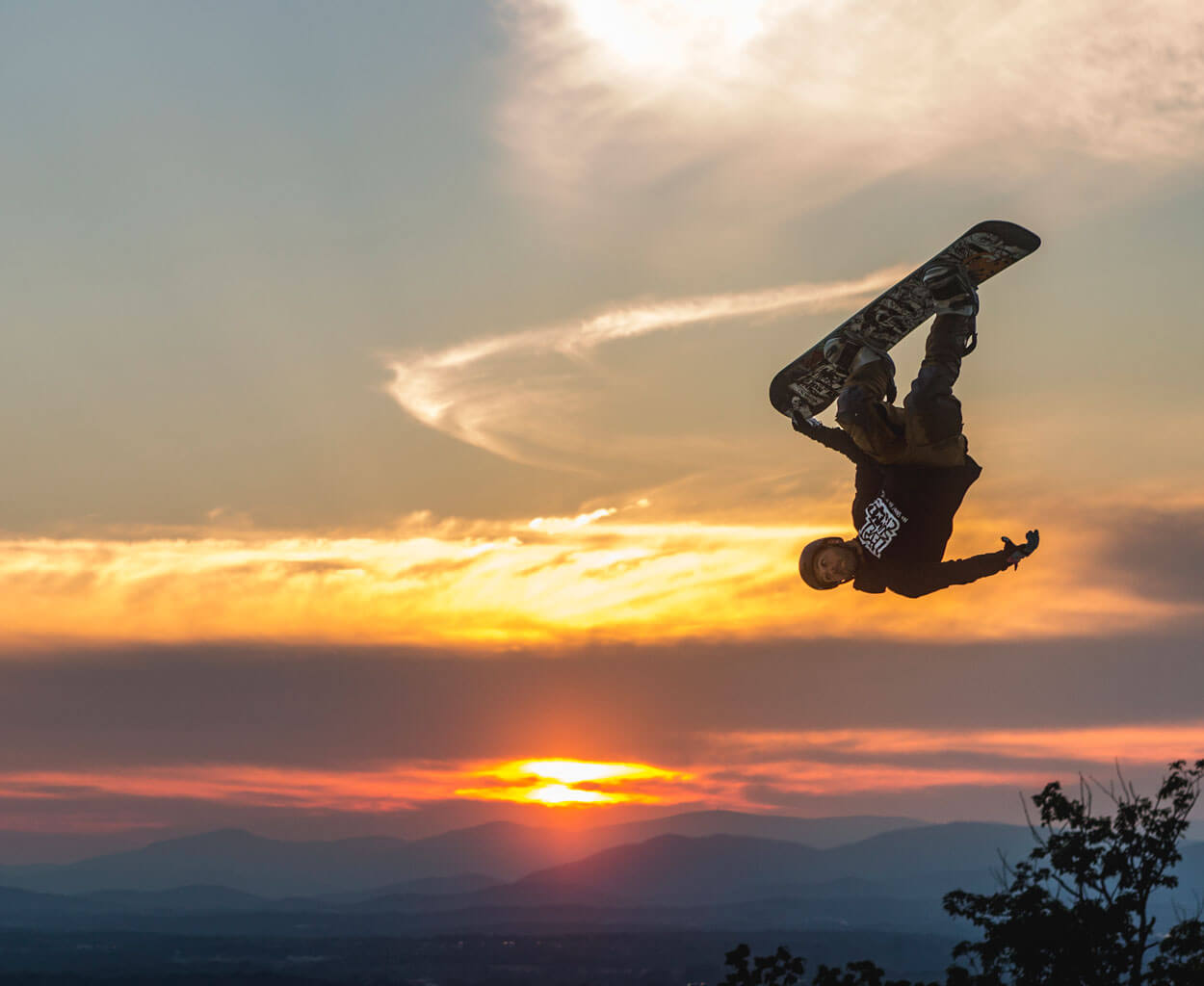 At Liberty Mountain Snowflex Centre, you don’t have to wait until winter to enjoy the slopes.

What is now a wonderland of paved and earthen trails was once an old railway system that ran alongside Lynchburg’s Blackwater Creek. Rent a bike from Bike’s Unlimited downtown and start pedaling. “Most of the trail follows the creek into the city center, but it spurs off in different directions with different creek-side trails,” Campbell says. “Even though you’re in the middle of the city, you’ll never know it because there are virtually no buildings intruding on your view. You’re in this lush green space.”

The RiverWalk trail runs through Lynchburg’s historic downtown and then over a bridge to Percival Island, used by the railroad 80 years ago as a refueling spot. After cycling across the island, you’ll continue on over the next bridge into Amherst County for the trail’s last two miles.

For a complete list of trails incorporated in the James River Heritage Trail System, check the Lynchburg Parks and Rec’s “Our Trails” page. “All of the trails are graded and most are paved, so they’re very forgiving — great for novices and people with a lot of experience,” Campbell says. 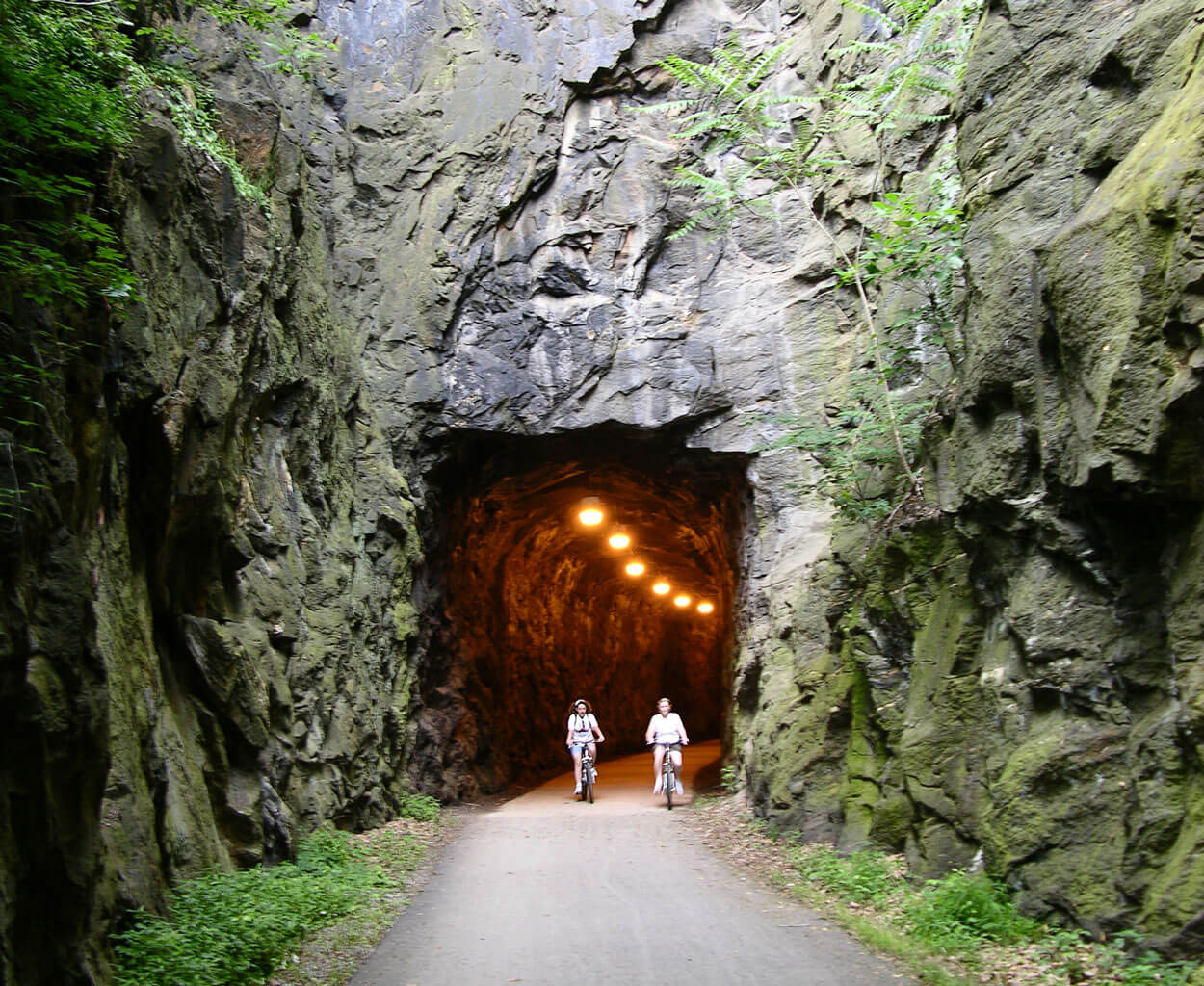 A ride along the Blackwater Creek Bikeway Trail promises adventure. Surrounded by lush greenery, you’ll pass through tunnels and over bridges. photograph by City of Lynchburg, VA

Located in the foothills of the Blue Ridge Mountains, the park features 15 miles of scenic nature trails that crisscross in and around forests, shoreline, and grasslands. In three freshwater ponds, visitors can fish for smallmouth bass, catfish, pan fish, and river gar. Horses are welcome, and the James River is perfect for canoeing, kayaking, and tubing. There’s even a canoe livery, which makes it possible to boat eight miles of the river. Visit their website before you arrive to reserve a cabin or campsite. 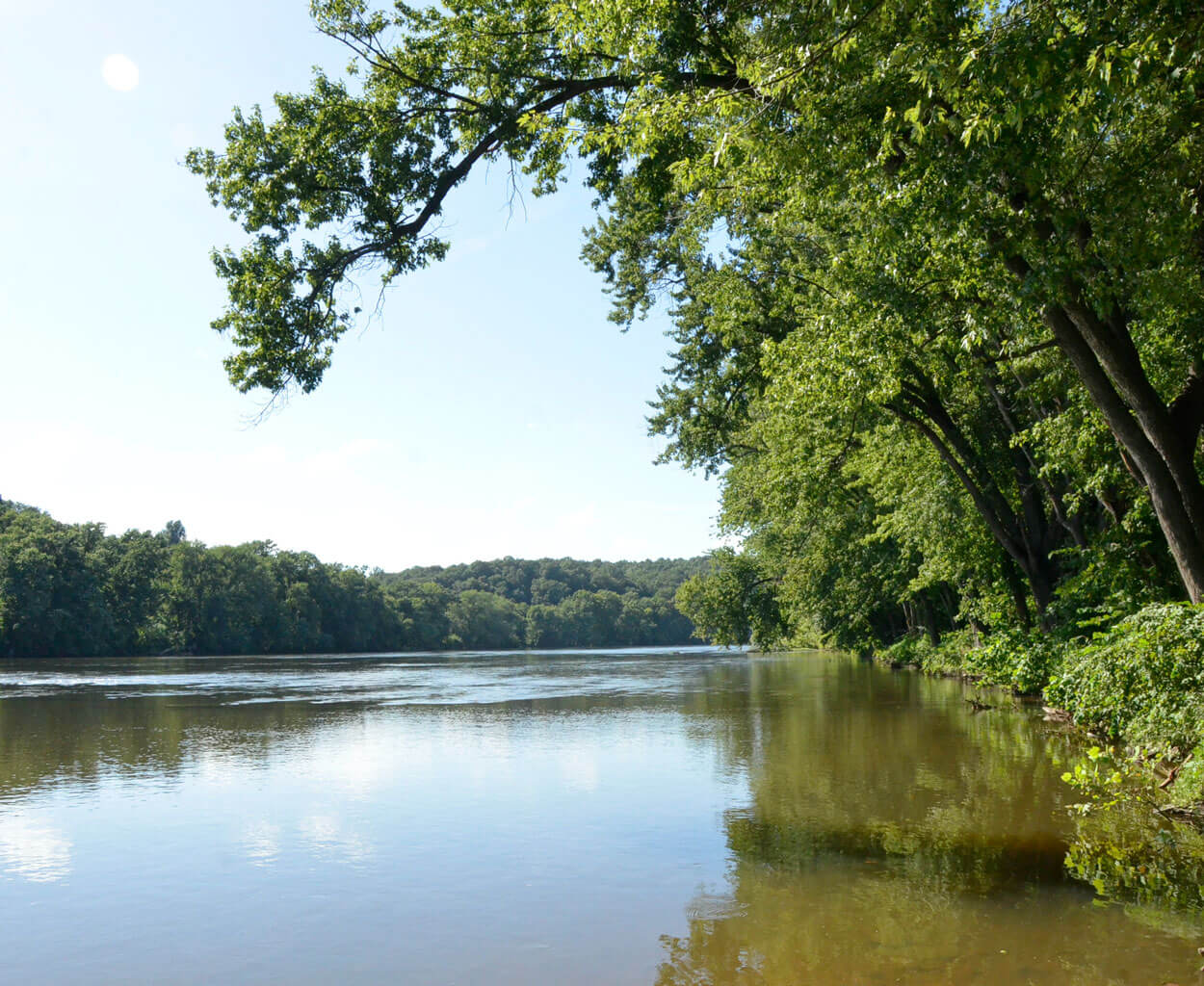 Grab a canoe or kayak and take to the water at James River State Park.

Get a living-history lesson at Appomattox

Famous for Confederate Gen. Robert E. Lee’s surrender to Union Gen. Ulysses S. Grant in 1865, Appomattox is a must-see landmark for tourists and history buffs. At your home base in Lynchburg, you’re an easy 30-minute drive away. Plan to spend an afternoon exploring; between the American Civil War Museum and the miles of pasture and old roadways surrounding the Appomattox Court House, there’s plenty to see (including the coat and sword Lee wore to the surrender!) and learn. Keep your eyes peeled for National Park Service Rangers dressed in period attire — as Confederate and Union soldiers and 1865 civilians — and take a few minutes to talk to them about the last days and final battles of the Civil War. 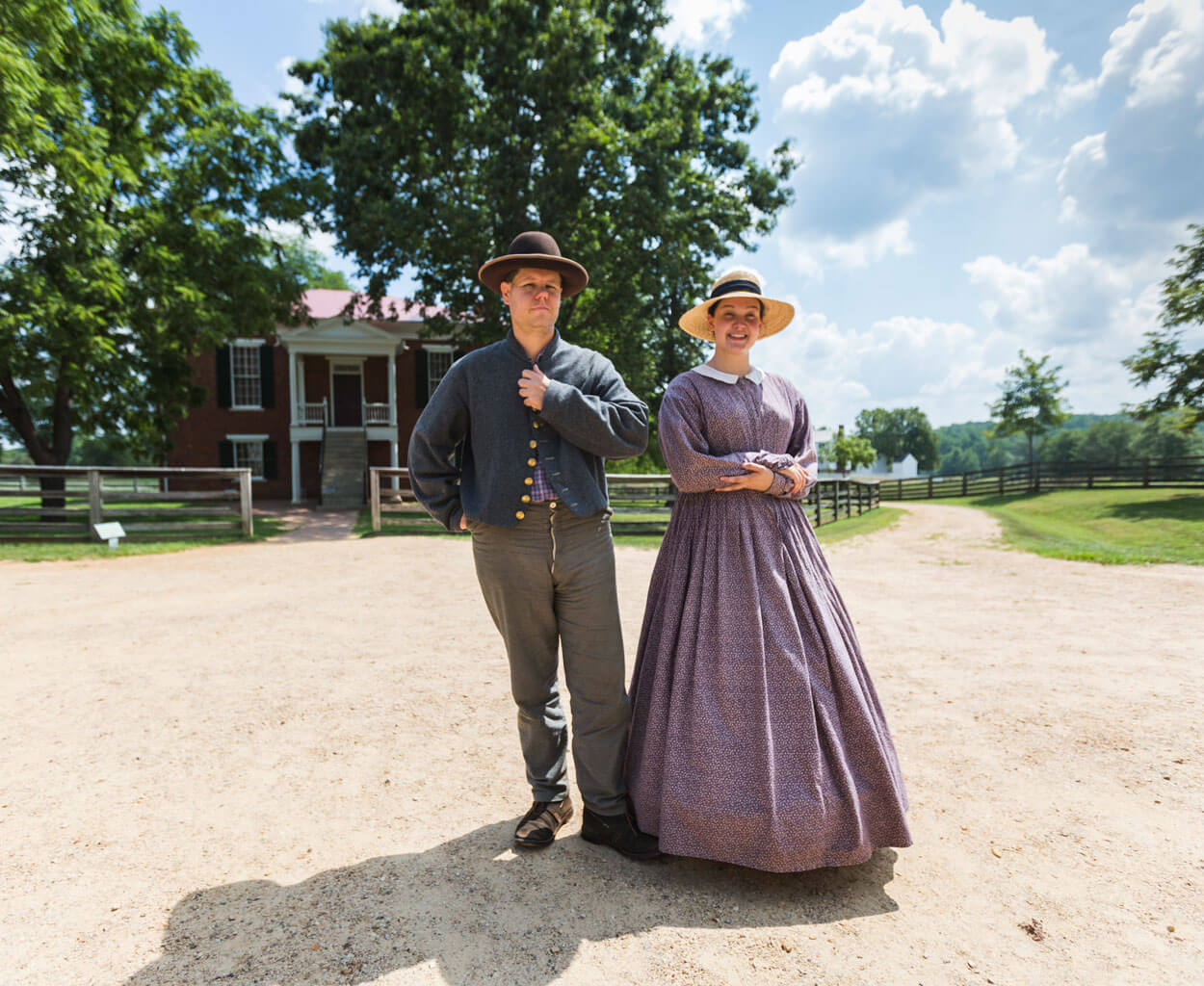 National Park Service Rangers dress the part at this Lynchburg historic site. Ask them questions about the final days of the Civil War.

Campbell recommends a few different hikes for exploring along the Blue Ridge Parkway, which runs through North Carolina and almost all of Virginia. “It just depends on how high you want to get started,” he says. At the first access point in a town called Snowden, where the James River crosses through the Blue Ridge Mountains, “you’re starting on one of the lowest points of the Appalachian Trail.”

There’s bad news and good news about starting in Snowden: “Whether you walk north or south, you’re walking up,” Campbell says. “But when you go back, you’re walking down!”

“Almost any place you go, you’ll have it all to yourself,” says Campbell, who’s lived in Lynchburg his entire life. “Lynchburg isn’t one of those places where you go see a beautiful scene and there are 500 tourists sharing it with you,” he says. “It’s one of those places where you can experience something special and beautiful, and you can carve out your own adventure.”