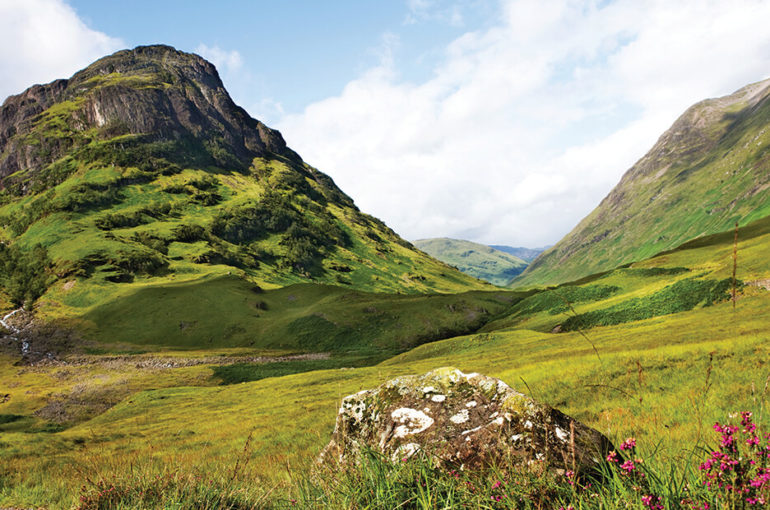 A journey inspired by Diana Gabaldon’s series Outlander. Join Our State as we bask in some of Scotland’s most sweeping scenic landscapes and iconic historical sites, many of which served as filming locations for Outlander.

Saturday, May 18
Depart RDU for Edinburgh

Sunday, May 19
Welcome to Scotland! Meet your Driver and Tour Director at the Edinburgh Airport to begin our sightseeing. Our first destination is Hopetoun House and Estate, a place of outstanding natural beauty, which has one of Scotland’s finest stately homes at its heart. We will tour this magnificent location as numerous parts of the house and grounds have played large roles in Outlander, including: The Duke of Sandringham’s stately home, the spare room in Jamie and Claire’s Paris apartment, the Hawkins Estate, the backdrop for Parisian streets, the stables at Helwater, and the exterior of Ellesnere. Another key filming location on the Hopetoun Estate is Midhope Castle, which Outlander fans will recognize as Jamie’s beloved Lallybroch. While no filming took place inside the castle, the exterior is instantly recognizable. Next, we visit Blackness Castle, dating from the 15th century and nicknamed “the ship that never sailed”. In Outlander, the castle is featured as Black Jack Randall’s headquarters in Fort William. Its internal courtyard is shown in the heart-wrenching scenes from Jamie’s incarceration. We will also explore the magnificent ruins of the birthplace of Mary Queen of Scots, Linlithgow Palace. In Outlander, the majestic entrance and corridors feature as Wentworth Prison where Jamie was imprisoned.

Hotel: Hotel Colessio – Our home for the next three nights is located in the heart of historic Stirling and is one of the most exclusive small hotels in Scotland. This luxury boutique hotel brings modern 21st century style and comfort to a grand building that dates back to 1825. Here we will host a Welcome Dinner for Our State guests. | Dinner included

Monday, May 20
Today, we travel to marvel at the splendor of Doune Castle, built as the home of Regent Albany, “Scotland’s uncrowned King.” Outlander fans will recognize Doune Castle as Castle Leoch, home of the MacKenzie’s and where Jamie first brought Claire. Our next visit is to Stirling Castle, a symbol of Scottish independence and a source of national pride. Knights, nobles, and foreign ambassadors once flocked to the Royal Court at Stirling to revel in the castle’s grandeur.

Tuesday, May 21
Today, we visit Duncarron Medieval Village, where we’ll experience an authentic, medieval, working community with hands-on history. Next, we soak up the atmosphere of Bo’ness & Kinneil Railway Museum – Scotland’s largest railway museum situated on the Firth of Forth close to Edinburgh and Glasgow. Bo’ness Station on the Bo’ness & Kinneil Railway stood in for the wartime London railway station where Claire and Frank said goodbye before taking up their wartime duties. Prior to dinner, we will visit one of the most picturesque villages in Scotland, Culross. We’ll see brightly colored houses that line the cobbled streets and the ochre-colored palace. In Outlander, the Mercat Cross area in the center of the town becomes the fictional village of Cranesmuir, where Geillis lives, while the garden behind Culross Palace stands in for Claire’s herb garden at Castle Leoch. Tonight we will enjoy a private group dinner in Culross.

Wednesday, May 22 | Full Breakfast is included at your hotel. As we travel to Loch Ness we will make our way to Kinloch Rannoch, a small village in Perth and Kinross, Scotland, at the eastern end of Loch Rannoch. It serves as the gateway to the Highlands. Then, we travel through Glencoe, one of Scotland’s most famous and most scenic Highland glens. We will visit Fort William, located at the foot of the highest mountain in the UK, Ben Nevis, and explore the impressive mountains and glens, forests, and sea lochs that surround the town. We will enjoy lunch in town today in Fort William and then enjoy a leisurely drive through Loch Ness, nestled in some of Scotland’s most spectacular scenery. You may even be lucky enough to spot the infamous Loch Ness Monster, Nessie! In the Outlander novels Claire and Frank take a cruise on the loch and in her 18th century life Claire meets the Loch Ness Monster known as a water horse in the novel. We will enjoy dinner at our hotel this evening.

Thursday, May 23
Today we visit the Battlefields of Culloden, where in 1746 the Jacobite cause, with Bonnie Price Charlie’s leadership, came to a tragic end. We’ll visit the exciting visitor center and interactive exhibition. You will see the moor where Jamie fights in the 1746 Battle of Culloden. Located just a short distance from Inverness, we will visit the Clava Cairns. It is a well preserved Bronze Age cemetery consisting of ring cairns, kerb cairns, passage graves, and standing stones. This site is hugely insightful into a way of life dating back as far as 4,000 years. The Clava Cairns are said to have provided the inspiration for Outlander’s mysterious Craigh n Dun – the standing standing stones which sweep Clair back in time. Dinner will be at our hotel this evening.

Friday, May 24
We will visit the Highland Folk Museum giving showing how Highland people lived and worked from the 1700s up until the 1960s. There is a display of more than 30 historical buildings. In Outlander, the museum’s replica 18th century Highland crofts are shown when Claire joins Dougal and his followers on their task to collect rent from the clan’s tenants. Next, is Pitlochry, a town situated in the heart of the stunning scenery of Highland Perthsire. It has been a tourist destination since the railway arrived here 150 years ago. We will have a lunch break in this quaint city – Lunch is included for Our State guests. Our group will celebrate the heritage of whisky production at the Deanston Distillery. You’ll enjoy a tour by the passionate team of local craftsmen, followed by a private tasting. The historic buildings of the Distillery stand in for Jamie’s cousin’s wine warehouse in Outlander on the docks of Le Havre. Dinner will be on your own this evening.

Saturday, May 25
On our final day of touring, we will visit The Palace of Holyroodhouse, commonly referred to as Holyrood Palace, which is the official residence of the Monarch of the United Kingdom in Scotland. The palace stands at the bottom of the Royal Mile in Edinburgh, at the opposite end to Edinburgh Castle. In September 1745, Bonnie Prince Charlie established his court at Holyroodhouse for six weeks. This is portrayed in the Outlander novels when Claire and Jamie visit the Prince at the palace and beg him to abandon his hopeless cause. We then visit the Kirk of the Canongate. This historic church stands on Edinburgh’s Royal Mile, just east of the royal Palace of Holyroodhouse. The church was founded in 1688 and the attractive Dutch-style building with its striking gable end was completed in 1691. Just as interesting as the church itself is the Kirkyard, where numerous important residents of Edinburgh were laid to rest. Economist Adam Smith lies here, as does philosopher Dugald Stewart. The afternoon is free for you to explore on your own. As your complimentary AAA Member Benefit, tonight is a chance to put on that tartan and join an evening of traditional singing, dancing and cuisine at The Spirit of Scotland’s Dinner and Show. It will be a grand night and a wonderful way to celebrate your last evening in Edinburgh.

Sunday, May 26
(Flight time permitting) Bid farewell to Scotland as we begin our journey home.

Full breakfast is included at your hotel