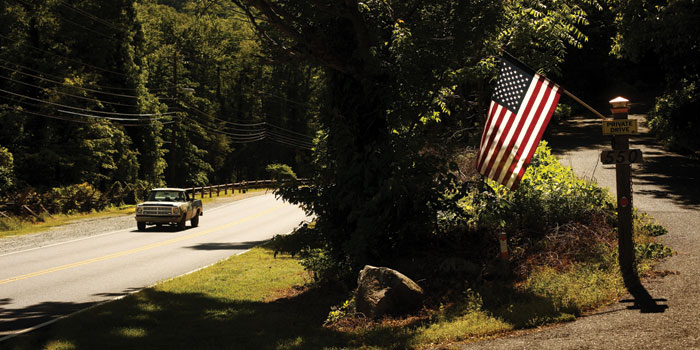 In the winter, when I had become logy with cold and the dry smell of our old house, I took my pickup out and drove onto the highway headed west. This, with some variations and adjustments for time, is the way many American stories begin. I may no longer be a young man, but I can still go west.

The highway that runs through my town, Pittsboro, is U.S. Highway 64. Sixty-four, which is the square of eight and the cube of four. It’s the number of squares on a chessboard, the number of crayons in a proper box, and the number of codons in the RNA codon table, the source code of life. Sixty-four is a pretty number.

U.S. Highway 64 is itself not as geometric and balanced as its namesake. The highway does not follow the logic of the planner, the engineer, or the mathematician, who would have been counted on to draw something straight and efficient with wide shoulders and gradual inclines. This highway, instead, appears to have laid itself out, following the logic of the traveler on footpaths, stitching a route out of dry creeks and unfenced fields.

The highway is not something built so much as something named. It’s an attitude: go west. At its western terminus in Arizona, I suppose that attitude would be described as return east, which is an altogether different impulse. Here, the path and every one of its constituent roads and pikes, its detours and bypasses, marks an inclination westward. We may use it to travel east sometimes; the most convenient beach for North Carolinians is eastward, for instance. But there is no doubting the reason U.S. Highway 64 exists is to describe a trace that could take you from Manteo all the way to the desert. This route is a blaze, a signpost, marking out the possibility of our own private manifest destinies.

Questions posed to me on Highway 64:

Outside Asheboro, I meet a young man just back from a four-wheeling expedition. His four-wheeler, apparently sculpted from mud, still sits in the bed of his little, foreign pickup. He catches me filming gas pumps at a roadside store, which is obviously eccentric behavior marking me for someone who might be interested in a gold mine he knows about.

“I’m serious, there’s one here. It’s famous, too.” He scratches his four days of beard, which in the bright sun makes his jaw look blue. He bounces on the balls of his steel-toed boots and cracks his neck. He believes I should know, since I’m new around town, that the Hoover Hill Mine is nearby, just over the Uwharrie River and up in the hills in some proximity to graves and tombstones somewhere in the general direction of over there. I suppose I should have pinned down an exact location, but I think that a gold mine will surely shine out and be easy to spot.

This particular gold mine was the discovery of an ancestor of President Herbert Hoover, whose people arrived in what’s now Randolph County at the time of the Revolution. It’s said that one day in 1848, old Joseph Hoover broke a wagon wheel on a rock. When he climbed down to fix it, he noticed that the rock had split open and now shined forth like manna, which is another way of saying that Joseph Hoover was the luckiest bad driver ever. The mine eventually produced 17,000 ounces of gold.

“There are Hoovers in my backyard, even!” the young man says, and so I look for them, but find no headstone. I manage to get myself lost, and I never do find the gold mine, either. I vow to stay on my appointed route from now on, no detours. I discover I am not the sort of man who wanders until he cracks an axle on buried treasure. That is a special sort of man, and I know my limits.

Demands made of me on Highway 64:

The road runs up, higher and more crooked the farther west it goes, until it nearly peters out in the rhododendron hills around Lake Lure. I drive for a couple of hours straight after leaving Hoover Hill. My pickup has a crunched back bumper, so I check periodically to make sure it hasn’t fallen off, and when I do, I see the stray pine needles in the bed rise up and float off in the slipstream. I hurtle through the glacier fields of propane country, past its tank farms and corrals, on my way to the forest.

It is a paradox of terrain that what is forested and steep seems not to have a history at all; at least, not one that’s immediately visible. The forest is a congregation of ancients, the hills are as they ever were. But the fields and pastures, the picketed balds, the little cinder-block buildings, new and abandoned alike — these have a history, time has left its mark on them. It’s possible to imagine their birth and life.

I stand outside Hendrix BBQ listening to the curling sheets of its roof rise up and clank down again in the wind. It’s my great archaeological find, not least because while I’m in the process of recording its artifacts and structures, the last of the Hendrix barbecue men approaches me to have a chat, which in my experience is not the usual case at archaeological discoveries.

“What are you doing?”

“I thought the lawyers sent you.”

“They always want me to sell.”

This is Kevin Hendrix, a muscular, middle-aged man with clipped, light-colored hair and a low-slung brick ranch across the highway. He wears a golf shirt emblazoned with the name of the company he works for, now that the restaurant is empty. We are in the aptly named hamlet of Fork.

The barbecue joint has been closed for most of a decade. It’s a low set of two small buildings made of cinder blocks and washed in graying, flaking white paint. There is a burial mound in the middle of the complex that contains remnants of soda cans, shelves, chairs, and brick ground to dust. Hendrix’s grandfather Odell started it up in 1968, around the time Hendrix was born. His father ran it, too, before handing it off to Kevin.

On the side of one of the little buildings hang two deerskins, discolored but very soft. They flap in the wind in time with the sprung metal roof, a sound that reminds me of a tin pan on a scarecrow. I film all this, and Kevin watches me, amused.

We talk about the restaurant, and although I expected him to be bitter about the forces that forced him to close it, what he seems most concerned about is what the closing of Hendrix BBQ meant for the practice of barbecue in the area.

“We used to use real wood.”

“Hardly anyone does that anymore. They got it on gas, and it’s just not the same. But we did it on wood, never did it any other way.” I tell him I’d like to check out the furnace in the back where he made the coals, and he says I’m welcome to it, but that I should be careful walking around back there; there’s lots of glass and rusting things.

“You have to do it on wood,” he says. “Otherwise, I don’t know why you’d bother.” And then he walks across the street and into his house.

Things I ate on Highway 64:

The clouds sometimes crowd the horizon like great purple steers, moving quickly north to south toward other pastures. The constant ebb and flow of the horizon, close at the tree line, distant across a rill of forested hills, makes it all seem deep and unfathomable. Paradoxically, when my old pickup gets into the flat and I can see that the horizon is fixed at a greater distance, everything seems simpler. There’s no mystery in the flattened earth, which is why we speed through the open to get back into places where nothing, least of all ourselves, is easily resolved to a straight line.

The road takes me into the mountains, and the woods and hills fill my windows. The hillsides leaning away from each road cut are covered in dormant kudzu, and in the distance, I can mark the proliferation of little creeks by the darker density of the trees at the water’s edge. On the ridgelines, I see what appear to be toy houses. Things look bigger in the flatlands, farther away across the hills.

Kids play basketball on grass courts with bent hoops and balls worn smooth. For the views alone, these are some of the most beautiful basketball courts imaginable. The radio is turned to the Tar Heels’ game against Clemson, and I find myself imagining that the kids have replaced the college players and that Woody Durham stands by on a nearby ridge, calling down the play-by-play. The youngsters play as if the world is watching and wipe their faces on their shirttails.

For hours, the road goes up, and for a long time, it’s unclear what’s at the end of up. I see countless sheds and barns and old smokehouses, auto body shops, antiques stores, meat-and-three joints, gun shops, historical markers, junkyards, warehouses, off-road tracks, trailers, crosses, piles of aggregate, and little pocket gardens newly tilled for spring. From the road, the little turnouts and overlooks, the blind driveways and clearings in the woods, they contain the signs of civilizations come and gone.

Here is the shed of Donald Burgess/Son, whose names have been revealed again through the paint that once erased them. Who was Mr. Burgess? Who is his son? All we have is a mystery, and an empty, white building with a peaked roof against a hillside of oak and maple. Will they return someday, the Burgesses? The building contains no answer.

The winding of the road in the mountains seems endless. The road seems endless. I wonder if I’ll ever get wherever it’s taking me. I begin to lose confidence that there’s anything on the outside, over the highlands.

And then the road opens up onto a mountain lake, to a place called Lake Lure, which is the kind of name one would expect to find in a fairy tale. In my room at the inn, there is a fireplace and a claw-foot tub. On the deck outside, I can watch the sunlight shine and sparkle until, bit by bit, it fades off the water and the moon takes its place. My lamp is sculpted in the shape of a leather boot, which seems just right. We, my pickup and I, have entered a strangely beautiful fairyland, and around the lake, I can hear the Corvette club downshifting into the turns.

On the phone that night, I tell my wife that I have found a place for us to go, that the road does go somewhere, and that this place is west but not too far west. I tell her I’m headed east in the morning. I’m awake now, I tell her. I’m awake, and I can hear the highway. It sounds like water.

Duncan Murrell is a contributing editor at Harper’s Magazine and The Normal School. His work has appeared in Poets & Writers, Oxford American, and Southern Cultures. He also teaches writing at Duke University and North Carolina State University. He lives in Pittsboro.