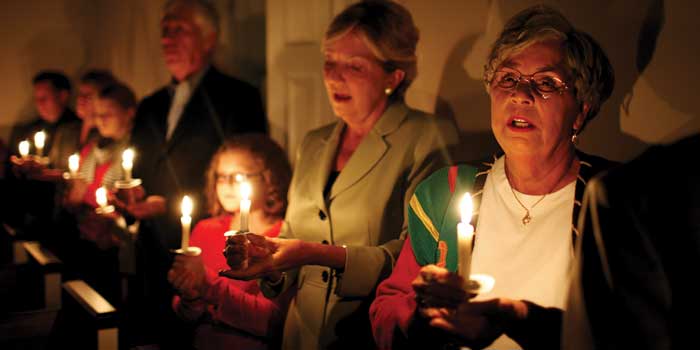 This Christmas Eve morning, the Rev. Ben Burrows will walk into his church’s century-old sanctuary as he does every year. Surrounded by the serene, white walls and rich, mahogany pews, he’ll run an extension cord from the pulpit and plug in an electric bread maker.

During his 10 years as pastor of Warsaw Presbyterian Church, Burrows has incorporated little touches to make Christmas Eve a memorable experience.

The loaf of bread, which will be used later that night for communion, cooks all day inside the sanctuary so that the smell of fresh-baked bread greets people as they file in for the church’s evening Christmas Eve service. The event is a favorite part of the year for church members, their visiting family members, neighbors from other denominations, neighbors with no denomination, and even the occasional person skirting through this corner of eastern North Carolina.

For the small-town church that opens its doors to friends and strangers throughout the year, Christmas Eve is no different.

“You wouldn’t believe people who are on the road passing by and hear about it from someone,” says Burrows, who pours months of thought into this particular night. “One person, one year, happened to be just traveling through the area and heard about it, and they just came.”

The church dates to the late 1800s, when Warsaw counted only a couple of hundred people.

The early years weren’t easy. Once the foundation and frame were up, a tornado blew everything down, leaving just a Bible, three pulpit chairs, and a spittoon unscathed.

The congregation started rebuilding, but again strong winds knocked the church off its foundations. But they forged ahead, and the church eventually opened in the spot where it has remained and grown.

“I guess that would say something for the perseverance of Presbyterians,” Burrows says, chuckling.

Warsaw Presbyterian isn’t the biggest church in Warsaw, a town of 3,000 in Duplin County, where farmland stretches for miles. But the congregation is made up of loyal families, and continues to include a mix of young and old.

It has 120 members officially, about 60 of whom fill the pews on an average Sunday. On one of those mornings a few months ago, they listened to the message, prayed for sick friends, and joined in with the choir.

With a quote from Billy Graham and the Lord’s Prayer, Burrows wrapped up another Sunday service. He headed to the exit to shake hands and say good-bye to those filtering out to home and lunch.

But others lingered in the fellowship hall. The big news of the day was about Henry L. Stevens IV. He and his pregnant wife recently learned they were going to have a girl and a boy. Word spread quickly from one cluster to the next so that Stevens found himself swarmed almost immediately with handshakes and wide smiles.

Stevens’s grandparents lived across the street from the church decades earlier.

“She was a Baptist. He was an Episcopalian,” Stevens says. “So they compromised.”

One of the things Burrows touts about Warsaw Presbyterian and why he’s stayed 10 years is that sense of community that extends beyond the church doors.

“We’ve got families who don’t attend church anywhere, but I am their family pastor,” he says. “I marry them and bury them and everything else in between, and this particular congregation has been very accepting of that and encouraging.

He’s not the only one who thinks that way. Whether through cookies, plates for newcomers to town, or outreach programs, members of the congregation aren’t shy about introducing themselves.

Sara Freeman, who moved to Warsaw for the first time in 1967 and the second time in 1992, and Cathy Lee, who has lived in the town for 40 years, are two of the members who volunteer at a thrift store and food pantry. The store and pantry are run along with a Methodist church, and the money raised goes to help local residents in all kinds of tough situations.

They also buddy up with other local churches to fill backpacks with food that low-income children take home, so they have enough to eat on the weekend.

“It’s just to help out,” Freeman says. “You just plant the seed, and then you leave the rest up to God.”

There’s no shortage of people in need, Burrows says.

“We’ve done everything from young families needing diapers and formula to heating bills, clothes,” he says. Adds Lee: “If they’ve just had a fire, we’ll help them out with that, things like that.”

Sitting just off Interstate 40, Warsaw is next to the final rest stop on the eastern arm of the national highway. This location brings travelers in need.

“There’s been stranded motorists. I’ll put them up in a hotel room, or someone who just needs gas to get to a certain place,” Burrows says. “I’ve bought auto parts. There’s just so many different kinds of needs out there.”

Burrows, 45, arrived at Warsaw Presbyterian a decade ago.

He’s a father of four — the oldest is in college, the youngest is in fourth grade — and his former career was in finance. But he switched course and went to seminary school. He grew up 15 minutes away in Rose Hill, where his family still lives.

“When I was growing up, Warsaw was the place to go in Duplin County,” Burrows says. “If you wanted anything business-related, we either went all the way to Wilmington or we went to Warsaw for a short ride. It’s a perfect place to grow up, but it’s just a quiet little town.”

Around the church and in the community, he is not Pastor Burrows; he’s simply Ben. “I’ve never been one for titles,” he says.

Burrows laughs easily — especially at himself — and congregation members use the word “approachable” to describe him. And he’s a fan of traditions.

When Burrows was a child, Christmas Eve meant going to his grandmother’s house. His grandmother, who wanted him to become a preacher — “she prayed me into it,” he says — used to have him read the Christmas story.

“It never occurred to me not to have a Christmas Eve service,” he says. “And I think it’s because growing up in Rose Hill, the Mt. Zion Church always had an 11 o’clock Christmas Eve service, and so tradition was that we would always go to Grandmama’s house for little snacks or whatever in preparation for that. But even as a kid, she always had me read the story to the whole family in their home. I think that’s the reason this always stands out to me as one of the highlights of the whole year.”

Burrows started his first Christmas Eve at Warsaw Presbyterian as a shepherd. In the years since, he has told the Christmas story from the point of view of nearly every person and thing involved.

The second year was the one church members still talk about — the year he swooped in as the angel Gabriel.

“There were feathers flying everywhere,” says Patsy Sheffield-Ludlum, who was baptized and married at Warsaw Presbyterian. “They were huge feathers.”

Burrows found the larger-than-life angel wings at his mother’s church. He assembled his own travel bag, complete with halo polish and wing wax.

Since then, he’s cycled through most of the list of people involved with the Nativity.

He doesn’t always dress up as a character, but he retells the story from the different perspectives. He’s been Joseph, a wise man, the innkeeper, a shepherd. He’s told the story from Mary’s point of view and even the cradle’s. He’s running out of characters. Soon, he might have to be the donkey.

“I guess being here 10 years, I can probably recycle something. I’ll do a message every other year,” Burrows says.

But the most meaningful part comes at the end of the service when everyone holds a candle, and the lights dim, Burrows says. Leaving their seats, those in the church line up in a circle around the walls and light each other’s candles, one by one. Christmas lights and street lamps shine through the windows from the outside.

In between the empty pews, a violinist — a church member’s daughter who plays for the Charlotte Civic Orchestra and visits every year — stands alone.

“She makes that violin talk to you,” Freeman says.

The first notes of “Silent Night” rise from the violin and pour over the sanctuary. Christmas arrives again in Warsaw.

“If that doesn’t put you in the Christmas spirit,” Burrows says, “I don’t know what will.”

Vicky Eckenrode works for the StarNews in Wilmington. Vicky’s most recent story for Our State was “A Gardener’s Best Guess” (October 2011).