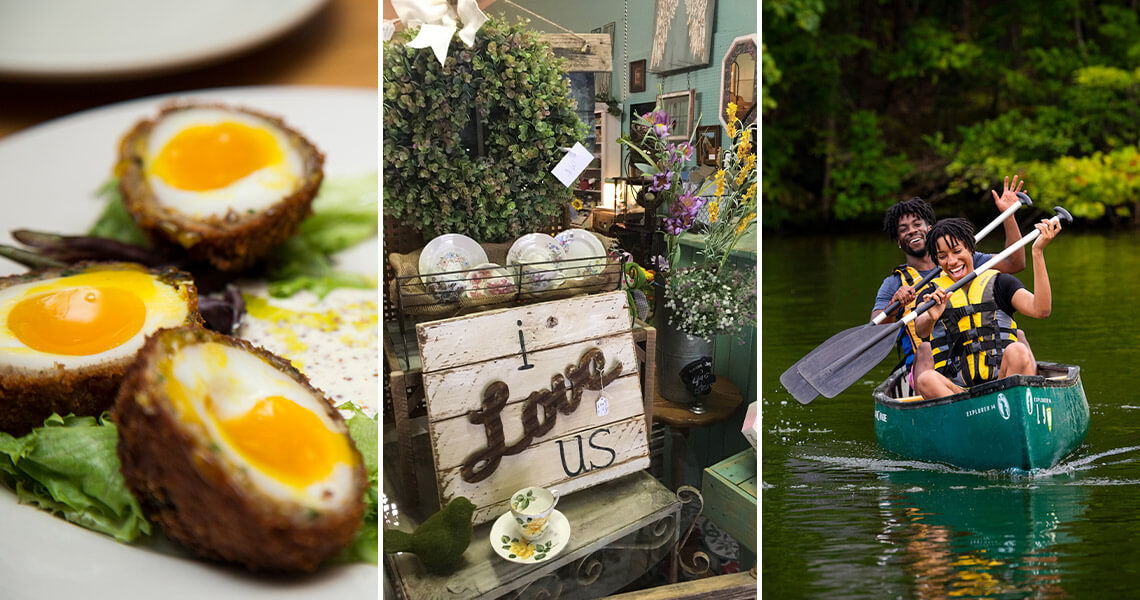 SPONSORED BY City of Reidsville

Reidsville has come a long way in the past two decades. Historically a factory town, things changed after Brown & Williamson’s acquisition of the American Tobacco Company in the 1990s ultimately led to the closure of the local Lucky Strike cigarette plant. Hundreds of workers were laid off, families moved away, and stores were forced to close. Reidsville had to shift its industry — its identity — to something beyond the factory life that had sustained it for years. And shift it did.

City officials began by working to reenergize Reidsville’s downtown, encouraging the purchase of old buildings by first-time business owners. Next, it looked at what other areas of the city could be developed or repurposed from a traditional factory layout to accommodate more updated and technology-based facilities. Reidsville’s close proximity to Greensboro provides an ideal location for businesses looking for the economic benefits of being near major highways and interstates, along with the less expensive land and lower real estate costs available in a rural community. This out-of-the-box thinking bore fruit in only a few years: Today, Reidsville is home to global companies that stretch from the United States to as far away as Israel, Italy, and Australia. 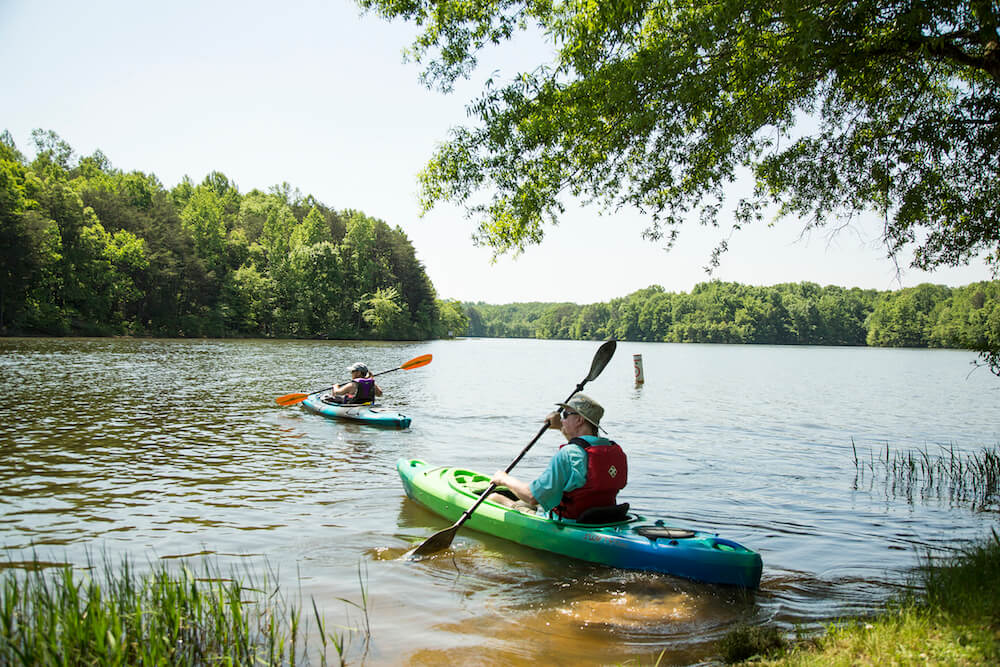 With so much to do and see there, you’re bound to run into someone you know at Lake Reidsville — whatever your hobbies. photograph by Dillon Deaton

The next phase of the town’s regrowth was to offer more recreational opportunities for both visitors and residents. This included the continued expansion of Lake Reidsville, a 750-acre reservoir and its accompanying park that have quickly become cultural gathering places. Everyone from paddleboarders to bass anglers use the lake for recreational activities. Basketball courts, an amphitheater, a disc golf course, and other amenities provide plenty of fun for those onshore.

Several miles of hiking and biking trails branch out from the lake, too, with plans for more in the works. There is a blueway system that provides miles of kayak trails that connect to a variety of other outdoor recreation spots. Lake Reidsville also boasts an RV and camping area where visitors can rent a shady spot and enjoy all of the surrounding amenities.

The historic Penn House is often the first attraction that people visit when they come to Reidsville. The 12,500-square-foot mansion was built in 1908 by American Tobacco vice president Charles Penn. It was donated to the city in 1980 and is now available for event bookings, business meetings, and more. 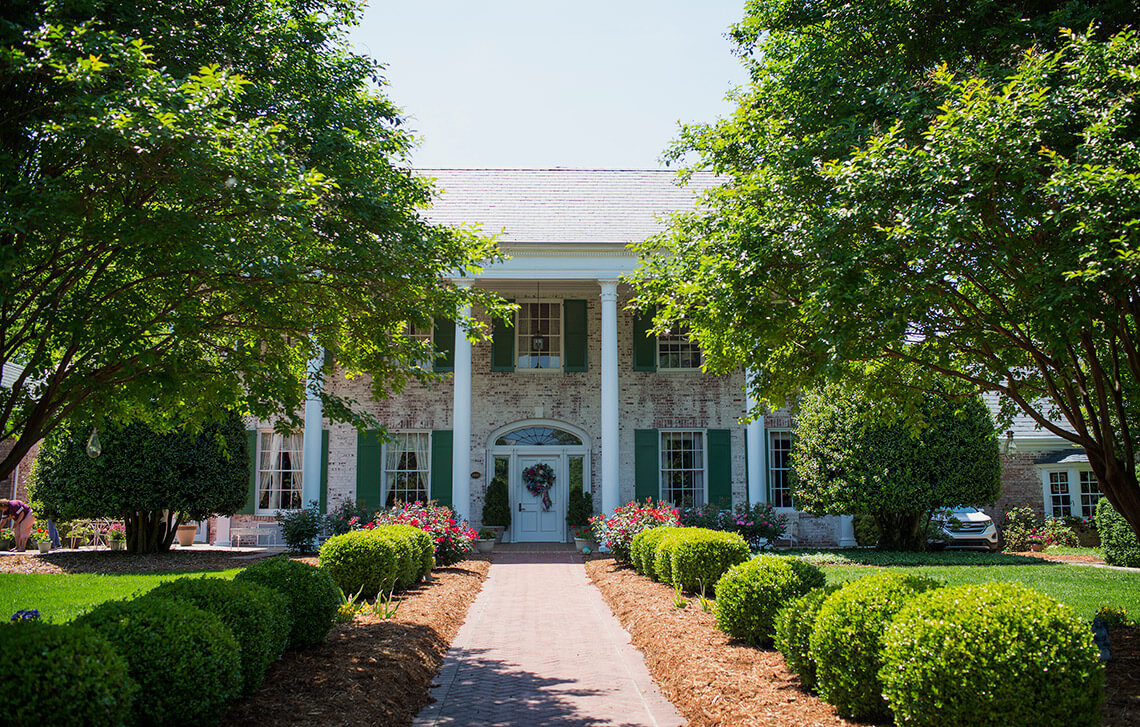 Penn House is a lovely venue for weddings. photograph by Dillon Deaton

Penn House’s main use, though, is as a wedding venue. Couples come from all over the country to be married there — some of them having never seen Penn, their selection of it based solely on the house’s reputation. Others come from the immediate area. “It’s a historic home, and people find that it’s also an absolutely gorgeous home,” Judy Yarbrough, City Marketer, says. “People usually get married in front of the house, with the bride coming down the staircase and out the front door to make a grand entrance. And it is a grand entrance.”

If Penn House is where love blooms in Reidsville, the downtown area is the community’s beating heart. Antique shops offer a taste of the town’s past, while the Reidsville Showcase, designed in 1929, features national recording artists. There’s a recording studio for musicians, as well as classic, old-timey barbershops. 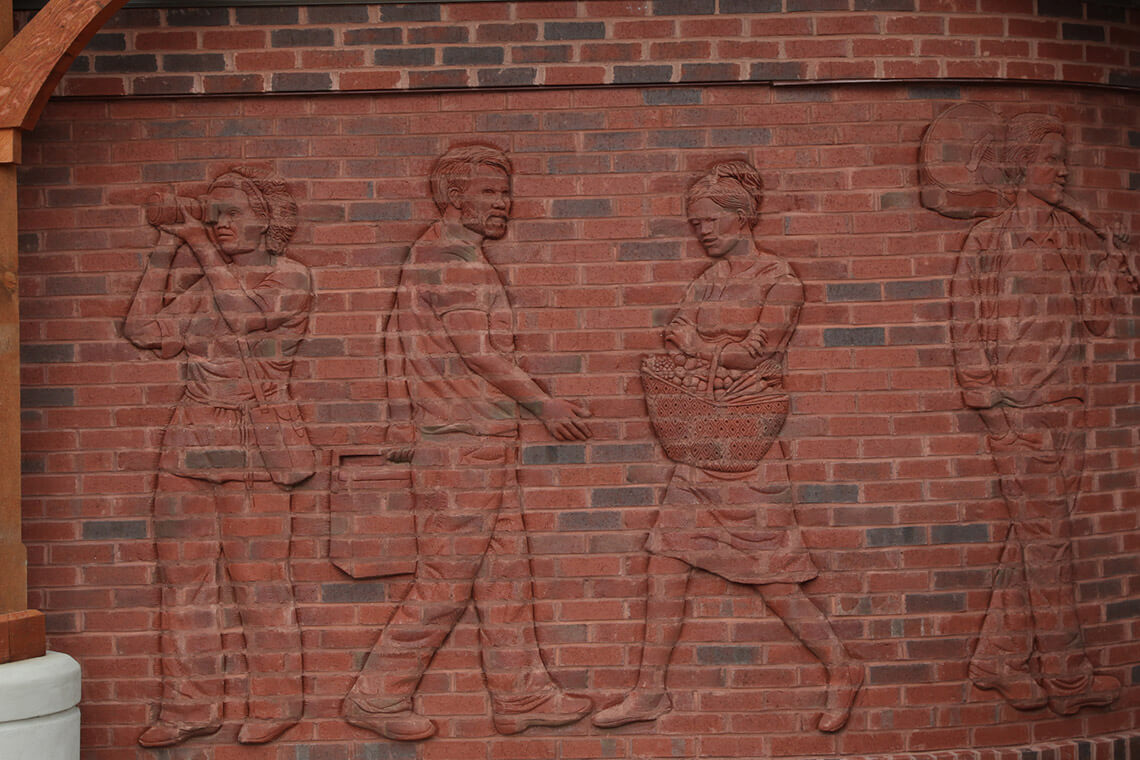 Brick artwork by Reidsville artist Brad Spencer is on display at Market Square. Photography courtesy of City of Reidsville

The cornerstone of downtown life is Market Square, the outdoor gathering place where folks come together for events such as a farmers market, fitness classes, and a number of themed events throughout the year. Concerts are held in the square’s amphitheater, including the annual FAB (Food Art and Beer) held in October. Brick sculptures by Reidsville-based artist Brad Spencer peek out from the walls — they’re so lifelike that it seems like they really are looking at passersby.

One street over is The Celtic Fringe, an Irish pub pairing Celtic cuisine with Southern favorites. The Fringe is owned and operated by Gary and Kim Forrester and their daughter, Shannon Blackburn. The three wanted to give Reidsville a unique dining option, but they weren’t quite sure how the public would react to offerings such as Scotch eggs. They needn’t have worried — The Celtic Fringe is now one of the downtown area’s most visited restaurants.

Reidsville is a growing community that has proven it can rise up and overcome any challenges by working together to build a place where you can Live Simply and Think Big. Come be a part of our history — and our future! 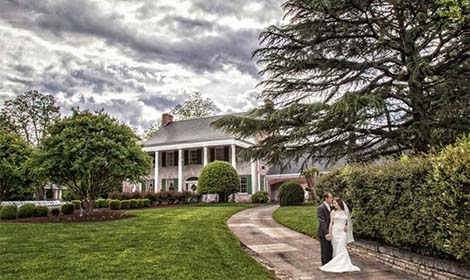 Those in the mood for something a little more “traditional” have options, too: 24 Blackbirds provides a great atmosphere as well as farm-to-table lunch options. Kelly’s Kitchen has your dessert fix, and Sip Coffee House has your cup of joe. The list goes on, proving that you don’t need to leave town for quality eats — no matter what you’re hankering for. They even have their own beer, which you can enjoy at Lucky City Brewery.

When you’re finished, there are five walking trails winding through downtown. They range in length from an eighth of a mile to more than three — perfect for working off all of that delicious food.

Reidsville has a lot to offer residents of all ages. As an N.C. Certified Retirement Community, the town has chosen to make senior living one of its top priorities. In 2017, it opened a new center for those 55 and older — the Reidsville Center for Active Retirement Enterprises. RCARE provides retirees with activities such as painting, Tai Chi, pickleball, and, of course, shuffleboard.

“It was an ‘If you build it, they will come’ sort of thing,” says senior center coordinator Cindy Baynes. “When we opened RCARE, we had about 350 active seniors. Our membership is now more than 2,500. We’ve worked to make sure it doesn’t feel like a senior center; we want it to feel like a place where people come to have fun and meet friends.” 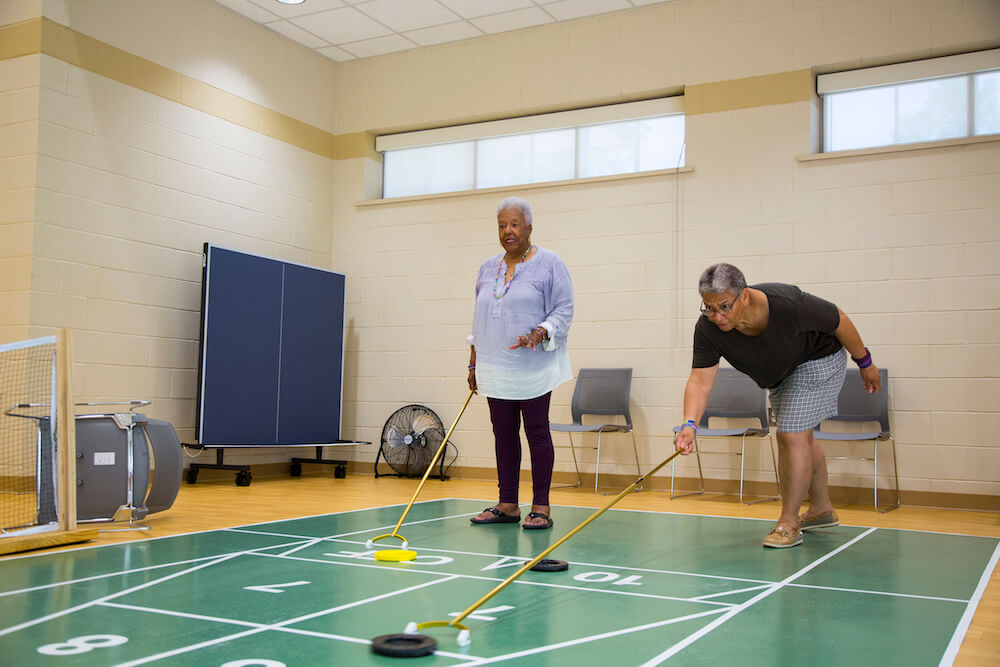 The center is only part of Reidsville’s commitment to seniors, though. Annie Penn Hospital is part of Cone Health, offering the sort of medical care that residents once had to go elsewhere in the state to find. The hospital’s cancer center, for instance, provides patients with access to more than 500 cancer specialists from across the Cone Health network.

Reidsville has plenty to offer its younger residents, too. There are great real estate opportunities in the area and several public schools in town. Reidsville High School gives the community its own Friday Night Lights feel: The Reidsville Rams football team has won 22 state championships, more than any other school in North Carolina.

Reidsville’s continued growth has attracted even more businesses in recent years, including David Ankin, a Hollywood stuntman turned fantasy car builder. Ankin is the owner of ToyMakerz, Inc., which not only specializes in custom builds but also has its own TV show, ToyMakerz, on the History Channel. Ankin and his crew trick out classic automobiles and muscle cars, along with creating one-of-a-kind specialty vehicles. Visitors can take a tour of the top spots from the show, and even schedule a time to visit the ToyMakerz shop and meet the crew.

The team often finds inspiration for future ToyMakerz projects at the summer cruise-in events held in downtown Reidsville. At a recent event, the owner of one of the classic cars asked to swing by Ankin’s shop for help with an engine problem he was having. Ankin listened to the man as intently as if he were Ankin’s TV producer and the request was as important as a directorial cue. He thought for the briefest of moments, scratched his beard, then answered, “Sure! Bring it by. We’ll make it work.”

“We’ll make it work” could be Reidsville’s mantra. After rising from the ashes of its lost tobacco plant, this town and its community of champions can do anything they set their minds to: together.

Learn more about all that Reidsville has to offer at riseupreidsville.com.