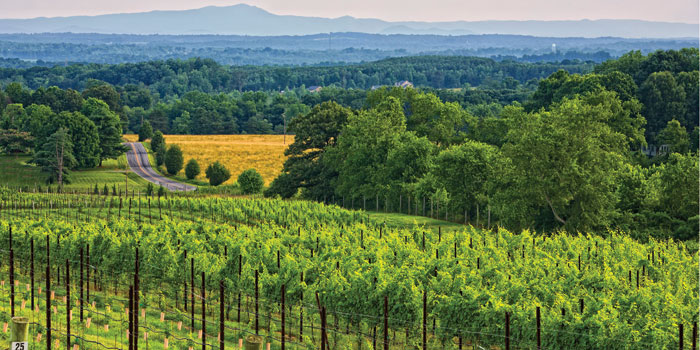 A glass of rosé in my hand, I step onto the piazza and climb the open-air staircase to the porch to take in the view. It’s a clear day at Raffaldini Vineyards, which sits on a Wilkes County hill just shy of the Blue Ridge. As I stand here, I can see our wine country. The gravel drive winds through the grapevines, and beyond that, the hills roll toward the horizon, and beyond that, distant peaks come into focus. I can see all the way to Grandfather Mountain some 60 miles away.

In the years I served as director of the North Carolina Wine & Grape Council, the back roads of this river valley were my territory. I sipped Chianti at Raffaldini, Sangiovese at Round Peak, Cabernet Franc at Stony Knoll, and Merlot at Westbend. Even now, I’m drawn to the region’s sloping countryside. I’ve made the drive to the Yadkin Valley countless times, and the miles on the interstate are often a white-knuckled chore. But my grip eases when I crest that big hill on U.S. Highway 421 and the mountains rise in the distance. From there, it’s a joy ride. I roll down the windows and breathe.

In Yadkin County, which was dry until just four years ago, a yellow farmhouse sits back from the road surrounded by rows of grapevines. Tim and Brenda Daub own and operate Flint Hill Vineyards. They planted grapes here because they wanted their children to grow up on a farm.

“We wanted to use the land and keep it in the family,” says Brenda, who, like her husband, grew up in Yadkin County.

The Daub family has worked this land for 140 years. Tim’s great-grandfather was born in the 1870s house that now serves as the tasting room and houses a farm-to-table restaurant.

The crops used to be corn and soybeans. Growing grapes is not the same.

The Daubs planted standards like Cabernet and Chardonnay in 2002, but Brenda is most fond of a red variety that is unusual for the area. “I like to serve the Chambourcin because most folks have never heard of it,” she says. “It’s not a West Coast grape, and that’s partly why some people buy it — they know it’s not a wine their friends have ever had before.”

While Brenda devotes her time to greeting customers and managing the tasting room, Tim works fulltime at his machine shop to help make ends meet. She hopes he can eventually join her at the vineyard now rooted in his family history.

While on trips with his racing team on the West Coast, NASCAR owner Richard Childress branched out from beer-drinking, sampled some wines in California’s wine regions, and eventually became a connoisseur. He returned to his beloved Lexington at the southern tip of the Yadkin Valley full of hope for his new venture. Not everyone shared his enthusiasm.

“At first, I tried to convince Richard to invest his money in a California vineyard,” says veteran Long Island winemaker Mark Friszolowski, “but he was all about doing it in North Carolina.” After a closer look at the land, Friszolowski changed his mind and moved south. “I realized that it could be the new hot spot on the East Coast,” he says.

In the 10 years he’s worked for Childress, Friszolowski has collected several best-in-show trophies for the winery. North Carolina wines, he says, are competing side by side with wines from California, France, and Spain. He describes this past year, which marked his 30th harvest here, as a dream vintage.

The Yadkin Valley is a young wine region. Unlike long-established places that have settled on one or two varieties over the course of centuries, growers here still search for the fruits best suited to their land. Many wineries have settled on Chardonnay, Cabernet Franc, and Viognier for their dependability. Bordeaux-style blends are popular throughout the region, and RayLen Vineyards in Mocksville has impressed many tasters with its bold, red concoction, Category 5, named for the powerful storms that regularly test North Carolina’s mettle.

But many Yadkin Valley growers veer from the standards. Raffaldini Vineyards draws inspiration from the family’s Italian heritage and produces beautiful wines from Sangiovese and Vermentino. Shelton Vineyards in Surry County, defying conventional wisdom, consistently makes a crowd-pleasing Riesling in a relatively warm climate. And along with ethereal whites, dry rosé, and rich red blends like Ring of Fire, McRitchie Winery in Thurmond takes full advantage of the local bounty and produces elegant hard ciders made from heirloom apples.

If people first saw vineyards in the Yadkin Valley as a phase, the quality wines flowing through Davidson, Davie, Forsyth, Stokes, Surry, Wilkes, and Yadkin counties have eased those doubts. I’ve watched a fledgling industry come into its own. Thirty-four wineries in the valley now produce first-rate wines that evoke an honest-to-goodness sense of place. And it’s a place where people have adapted to change and figured out how to preserve their farming heritage.

For me, the Yadkin Valley, with its intoxicating vistas and peaceful roads, is one of North Carolina’s most beautiful places. Its charm remains, thanks in large part to grapes.

Margo Knight Metzger is a photojournalist who lives in downtown Raleigh with her husband, Ken. She most recently
wrote “Little Chef” in the May issue of Our State magazine.