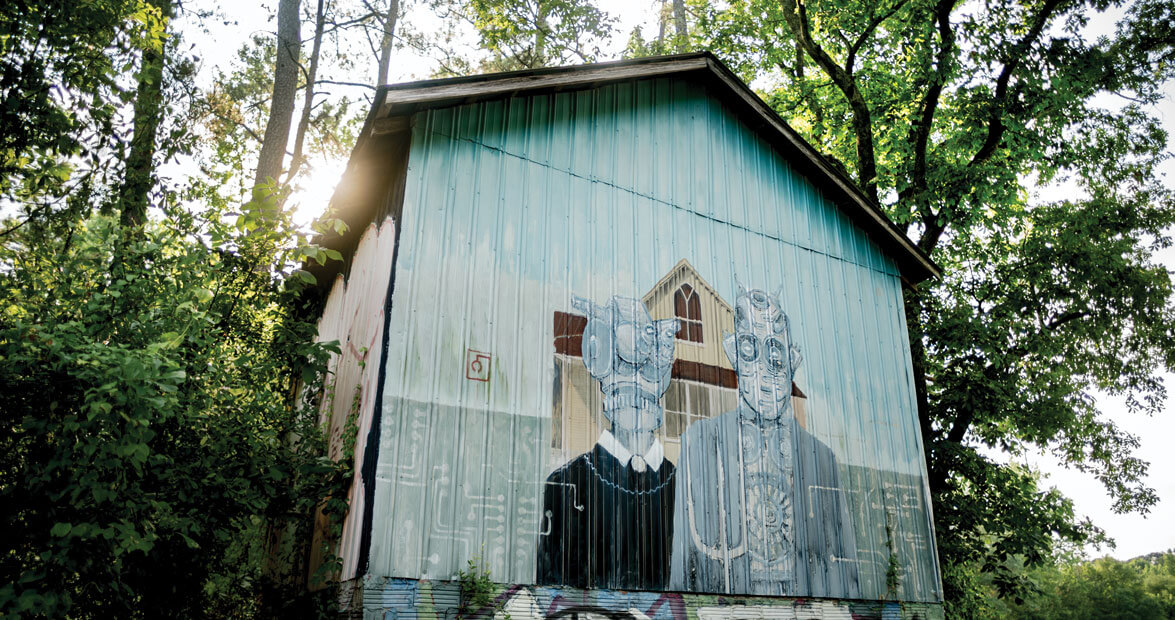 An arts and antiques fair is underway along the tree-lined main drag of Cameron, people rummaging through old jewelry, folk paintings, and kitschy memorabilia. But I’ve come to this little town — some 30 miles northwest of Fayetteville, 17 miles northeast of Southern Pines, and nowhere near anything else — in search of another kind of art: two dozen or so broken-down tobacco barns painted with images you might expect to see on subway cars in 1980s New York City. These unlikely barn paintings, the brainchild of a local kid named David Ellis, made a splash in the art world when they began popping up 20 years ago. But after two decades of exposure to the elements, I doubt that many of them have survived, let alone that I can find them. For all I know, they’re hiding in plain sight, their once-bright colors camouflaged by vines and brush.

At the far end of town, I spot an old hardware store that’s been converted into an antiques shop. Maybe someone inside will know about these fabled painted barns. I crack open the screened door and peer inside. Two women, one in pearl earrings and large-frame glasses, sit behind a counter under a sign that reads, “Southern Dairies Ice Cream.”

“Yes, of course!” says the bespectacled woman, who introduces herself as Mrs. Jane Fairbanks. She reaches under the counter and pulls out what is, to me, on this sunny Saturday afternoon, as monumental as Jim Hawkins’s coveted map to Treasure Island. Stuffed in a faded yellow folder is a stack of Xeroxed maps emblazoned with the words: See the Barnstormers’ amazing painted tobacco barns in scenic Cameron, NC! 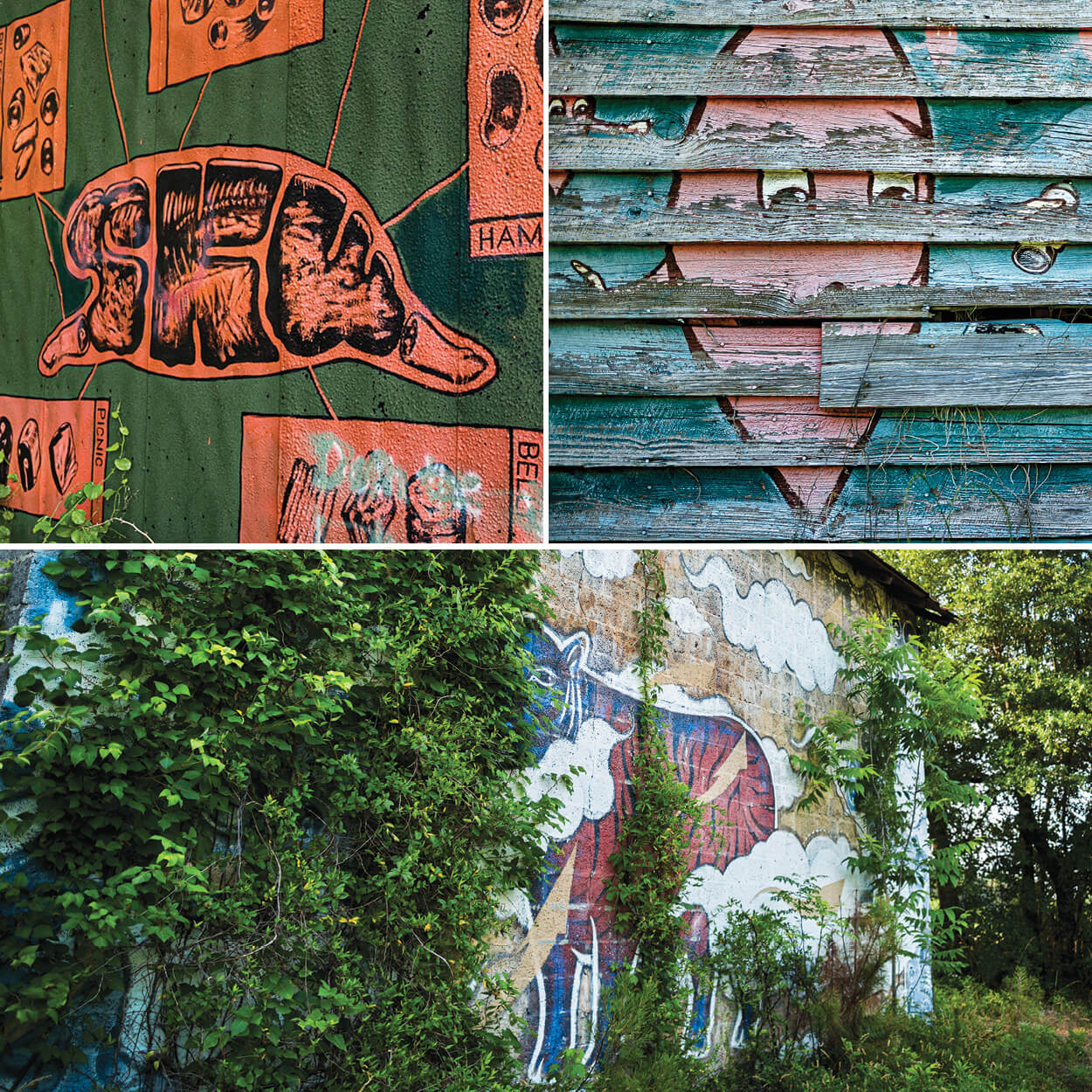 A few of the pieces nod to Ellis’s Southern roots, such as his diagram of a Sunday dinner (left) and his sweet potato (right). The very first painted barn was a collaborative work by Ellis and Japanese artist Kami (below). It was inspired by a bag of Black Kow manure that Ellis saw in a Carthage hardware store. photographs by Charles Harris

David Ellis is a preacher’s kid. And like so many preacher’s kids, growing up, he had a restless, creative spirit. According to his mom and dad, he showed artistic promise early on, painting the vivid images — like a fully realized tooth fairy — that he saw in his head. Grace and the Rev. Stewart Ellis encouraged David, but not all of the parishioners at Cameron Presbyterian Church, where his father was pastor, understood the young prodigy. “What most people in Cameron thought about art was just realistic landscapes painted from a photograph,” Grace recalls. She and Stewart are now retired and living on a farm in Clemmons. “One of the people at church asked David, ‘How could you know what the tooth fairy looks like?’”

Not only did David know what the tooth fairy looks like, but he also knew what sound looks like. His father watched in awe as David began to understand how visual art intersects with music. “He wanted to paint music,” Stewart says, “so a lot of his painting is somehow always related to music.”

By eighth grade, David had become fascinated with hip-hop culture — the combination of rapping, break dancing, and graffiti art that was beginning to bubble up into the mainstream popular consciousness of the mid-1980s. “David was interested in it early on — early on — before it became so widespread and was used in ads and everything,” his mother says. But in tiny Cameron, you didn’t see many kids wearing Kangol hats and track suits; there were no subway cars to splash with elaborate graffiti art. David and his Union Pines High School friend John Carter had to go out of town to pursue their artistic interests. Grace laughs when she recalls the time John’s dad took the boys to a record shop and threatened to embarrass them if they lingered too long. “If you all don’t come out in 30 minutes,” he told them, “I’m going in there and asking if they have any Patsy Cline records.” 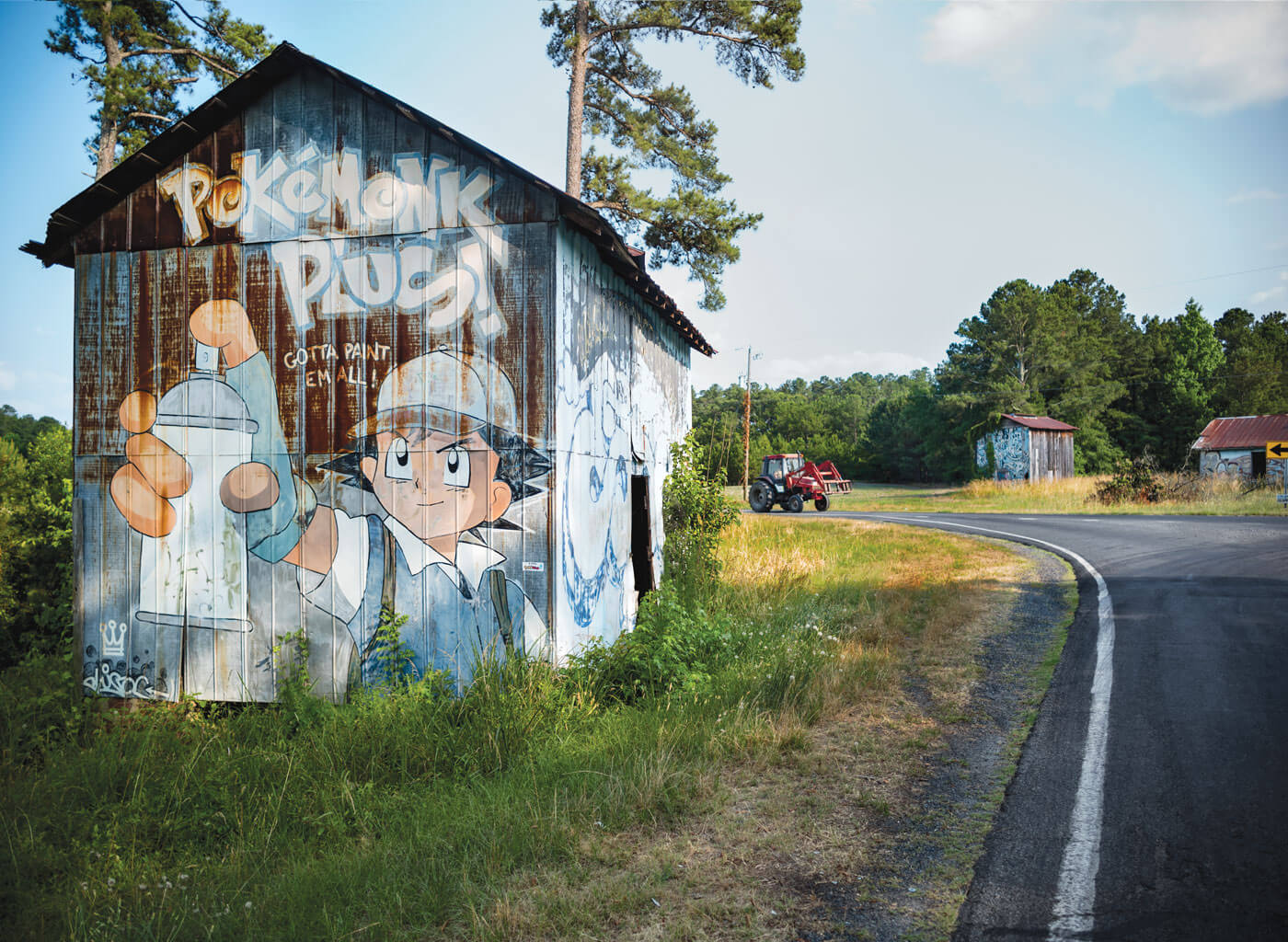 The Pokémon figure was painted by Barnstormer Alex Lebedev. photograph by Charles Harris

David’s talent earned him a spot at the North Carolina School of the Arts high school in Winston-Salem — a world away from Cameron, culturally. The two years he spent there were “transformative,” he says. After graduating, the country boy set off for New York City, where he studied at the School of Visual Arts and then, in 1994, earned his Bachelor of Fine Arts from the prestigious arts and engineering school The Cooper Union. In New York, David met friends who, like him, were drawn to street art, a style that had been gaining in respectability with the rise of artists like Jean-Michel Basquiat and Keith Haring. David’s circle of friends opened up to include young artists from all over the United States and the world, including Japan and Cuba. In 1996, he hatched an idea to bring several of his artist friends down to Cameron, where they’d paint urban street art onto the sides of rural tobacco barns — structures that had served David during his teenage years. “All the outbuildings, chicken houses, and farm trucks were early canvases,” he says. David, who now lives in Brooklyn, says he invited artists “who I thought would like to paint on a large scale in the beatific countryside where I had painted over a decade before. I was just craving a big collaborative project.”

David secured permission from the barn owners, and the project — which began in 1998 and included a total of about 50 artists — took a few summers to complete. A librarian at the high school supplied the groups with a bunch of very early cell phones so that they could communicate with each other. Other folks brought food to the artists, who camped out for a week or so at a time and painted barns that were clustered together, as well as a few outliers. Locals, like Mrs. Fairbanks, watched with a mixture of curiosity and pride as the paintings went up. “David had done a mural on the cafeteria wall at school, so his art interests were well known here,” she says. “And he was a local boy, so there was a lot of talk about it.” A nearby newspaper came up with a name for them: the Barnstormers.

“All the outbuildings, chicken houses, and farm trucks were early canvases.”

When the bulk of the project was complete, by 2000, wild, colorful images covered 25 barns across the county. Eventually, interest in the native canvases died down. Things got quiet again in Cameron. Paint peeled. The sun faded the deep blues and reds and yellows. Some of the barns were even torn down. But then, in 2004, the Southeastern Center for Contemporary Art (SECCA) in Winston-Salem invited David and his crew down for an exhibition: The group dismantled one of the barns, took it to Winston-Salem and reassembled it, and each artist, in turn, painted an image on it, then painted over that image so that the next artist could paint his or her image on it. This happened over and over throughout the show, and the whole thing was captured in a 30-minute time-lapse video — an artistic medium in which David, now 48, currently works.

Interest in the murals was on the rise. Somebody made maps to the barns, and Mrs. Fairbanks put a bunch of those maps in a yellow folder inside The Old Hardware antiques shop. Travelers coming through town to find the barns eventually find their way to Mrs. Fairbanks. Just like I did.

“Excuse me — are you from around here?” I’ve pulled over near the intersection of Nickens, Stanton Hill, and Red Hill roads, just west of Mrs. Fairbanks’s shop, next to a barn with ESPO painted in swirly strokes across the front and BLISS scrawled across its rusting tin roof. A mother and daughter stand together across the street, taking photos of another barn, whose front is painted in paisley-like strokes of white, black, and fading blue. It’s the one that the Barnstormers dismantled, moved to Winston-Salem, then reassembled after their show at SECCA 15 years ago.

“We’re from Vass, not far from here,” the mother tells me. I’m surprised to see anybody here at all, at a quiet country crossroads, on a Saturday. Maybe, I had thought, a few people might travel here occasionally to glimpse the old barns covered in 20-year-old street art. But surely not many — surely, I wouldn’t run into any of them today.

“What made you come out here to take pictures of them?” I ask the mother.

“Her,” the mother says, pointing to her teenage daughter. “She’s been wanting to come out and see them. She’s seen pictures online.”

They smile, take a few more shots of each other, a few selfies, then drive away. Leaving me alone to experience the paintings as a kind of surprise in the landscape: art amid the kudzu. These barns won’t be here forever. Some of them are already gone; others are beginning to collapse from the inside. Grass and vines have obscured all but a handful.

And the images painted across them: They’re peeling and falling to the ground in chunks. Images that once represented the newest of the new in popular culture, splashed across tobacco barns that, even further back, represented the newest of the new in North Carolina agriculture. They’re all washed out and in splinters now. And both of those eras, rural country and urban hip-hop, themselves separated by decades, are now antiques: rich traditions soaked in memories of bygone times.