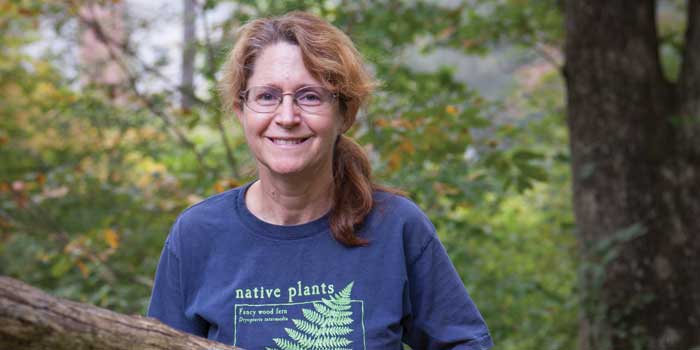 Janet Manning’s greenhouse has no glass. No architectural frame. Just a series of dug-out squares in the ground, topped with wire grates.

Mulched with the fallen leaves of surrounding trees, these seedling beds lie just off the dirt walking path that winds through the Corneille Bryan Native Garden at Lake Junaluska. The below-ground boxes are as much a part of this natural preserve as anything else in the earth here, and they are an ideal spot to nurture baby plants. Seedlings are able to emerge just a few feet, in some cases, from the spot where they’ll take root.

As the director of horticulture for the Corneille Bryan Native Garden, Manning watches over plants once prominent throughout Appalachia — before golf courses and roads and neighborhoods relegated them to the innermost reaches of national forestland. These plants, approximately 500 species of them, now rely on Manning and her team to survive.

There are ramps and wild ginger, once staples in the diet and medicinal practices of the native Cherokee. A small clearing makes a sunny home for spring ephemerals, while a fallen black oak, its tangled root ball jutting jagged tentacles into the air, creates an ideal nursery for native ferns to sprout.

It is cool on this morning as Manning guides a group through the garden. Along the edge, just out of sight, are some of the oldest homes at Lake Junaluska. But once you slip inside the Corneille Bryan preserve, those man-made structures seem worlds away.

“We’re trying to mimic all of Appalachia right here,” Manning says, “in our acre and a half.”

Place for the spirit

The garden, with its unassuming entrance and minimal signage, is a hidden part of a community unknown to many North Carolinians.

Despite being founded in 1913 and open to the public for decades, Lake Junaluska remains mysterious — a quiet, historically Methodist retreat near Waynesville most often seen as a line on a road sign on the way to Maggie Valley.

A century ago, Methodist leaders founded this retreat in the mountains to provide sanctuary for fellow leaders and members of their congregations. It was a place of spiritual enrichment, a place to encourage meaningful worship and to grow within. Lake Junaluska is likely best known for its summer camps and religious retreats.

More than 75 years passed before the Corneille Bryan Native Garden became part of Lake Junaluska’s campus. Much like the community itself, the garden is a sanctuary — both for the spirit and for the plants.

Plants that have been precariously positioned at the edge of extinction are brought here to survive. Half of the world’s known shortia, a threatened herbaceous perennial, went underwater when the nearby Jocassee Reservoir was filled during the early 1970s. A species of grass of Parnassus, a flowering perennial, disappeared from Waynesville after a road-widening and repaving effort. Yet both of these species live here.

Decades ago, Maxilla Evans made it her mission to save Appalachia’s disappearing species. The avid gardener would visit nurseries full of rescued plants, make her selections, and bring them back to her hilltop home overlooking Waynesville for sanctuary.

In 1989, members of the Tuscola Garden Club at Lake Junaluska suggested cleaning up an overgrown ravine in the middle of the community to “uncover the beauty of its natural state.” The garden would also be an opportunity to bridge the disconnect between the residents of the lakeside retreat and residents of the surrounding town.

Evans saw this garden, just a few miles from her home, as a way to bring her plants into the public eye. She supplied much of the garden from her private collection.

The garden was dedicated on July 14, 1990, and named in memory of Corneille Bryan, wife of Bishop Monk Bryan and a member of the garden club. Since then, botanists and biologists from across the region have used it as a place to teach and learn. Students from Haywood Community College and Western Carolina University, as well as members of regional garden clubs and botany clubs, spend time here.

Parts of the garden feel almost prehistoric. A bigleaf magnolia is one of the more exceptional examples. Its 30-plus-inch leaves look more like turkey platters than magnolia leaves. The trees usually grow only in protected coves, of which there are fewer and fewer in Appalachia.

Even before it was a native garden, the land here had long been filled with a mixture of mature oak, black walnut, and locust trees. The low-lying ravine also included two rock-encased springs that were once used to keep food cool for the lake’s residents in the heat of summer. Today the springs remain, as do the large, original trees, but the understory of the forest has now been planted with a mixture of other natives.

“This is more like a piece of the national forest,” Manning says. “Just like the forest, everything’s not obvious to you. You have to look.”

As spring arrives, the native garden at Lake Junaluska awakens with Virginia bluebells, yellow wood poppy, white dwarf crested iris, flame azalea, and yellow lady’s slipper. By March, trillium pop out of the ground, and by April, they are in full bloom.

Most of the native species found here are wild specimens, varying slightly from their cultivated counterparts.

Sometimes dead trees are taken away, but just as often, they’re left as habitat for the resident animals of the forest, such as owls, flickers, rabbits, and moles. The one thing you won’t find here is invasive species, like English ivy, which residents intentionally plant in their home gardens nearby but gardeners pull like weeds from Corneille Bryan.

This dedication to authenticity has attracted support from unlikely places. A society of naturalists recently gave the garden 10 endangered conifers of the Torreya taxifolia species. The conservation group named each of the trees after a noted conservationist or botanist. After planting the seedlings at Lake Junaluska, the unusual organization of preservationists, who call themselves the Torreya Guardians, gathered and quietly serenaded “Henry David Thoreau,” “William Bartram,” and the other conifers, before leaving them in the garden’s perpetual care.

One of the most awe-inspiring trees in the Corneille Bryan Native Garden is the Carolina hemlock. The hemlock was once prominent throughout the Nantahala and Sumter national forests. But a walk through those areas now reveals tall, spindly corpses of hemlock. The trees are being destroyed by the woolly adelgid, a small, aphid-like insect with a ravenous appetite. The hemlock at Lake Junaluska, at 40 feet tall, is one of the dwindling examples of healthy hemlocks in the region. Several hemlock saplings are also part of the garden.

Heidi Coryell Williams lives in Clemson, South Carolina. She has written for Spirit Magazine (Southwest Airlines), TOWN, and WNC. Her most recent story for Our State was “Hell and High Water” (February 2013).