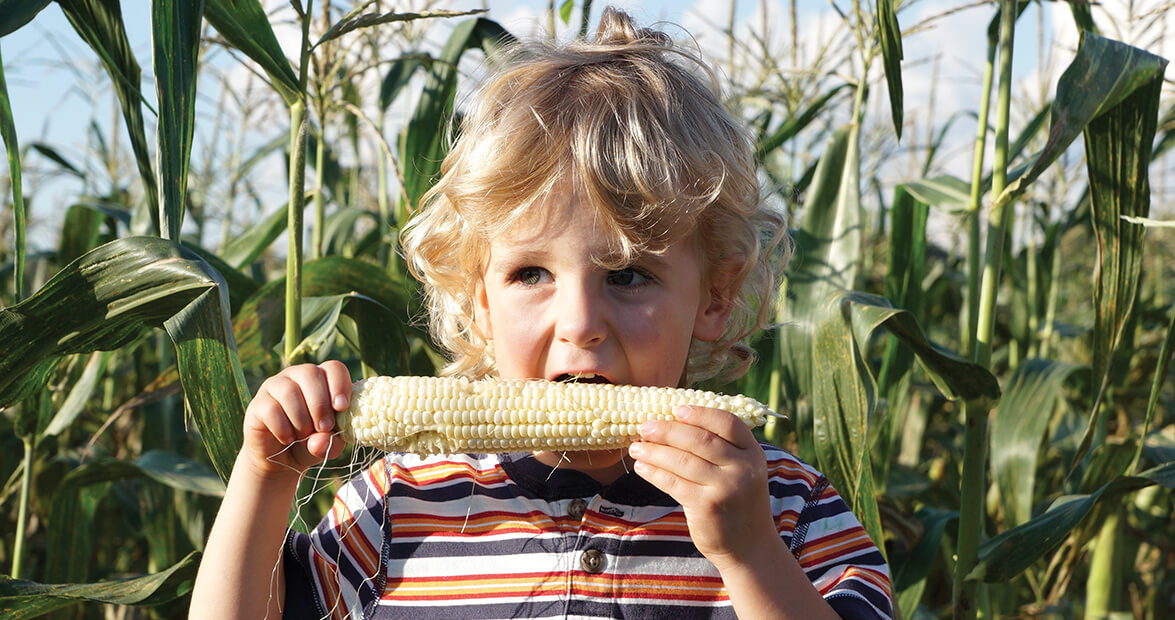 The sun traces low through the oaks in the windbreak west of us, and Kenneth Rudd Sr., wearing a red Rudd Farm ball cap and T-shirt, looks down at my boys. They’re here to see corn trees, they tell him. He laughs the slow laugh of somebody who’s seen it all. “Well, y’all come on this way, then,” he tells them. “Watch out for that mud over there.”

My 4-year-old, The Wee, speaks in paragraphs these days. He’s an open spigot. “It’s too bad it’s not popcorn,” he’s saying. “Because then we could get all the corn and cook it and pop it and put it in the very biggest bowl and then Daddy? Do you remember how once we had a parachute and we could fly into the bowl of popcorn and then it would be my birthday? Do you think there will be eighty-sixteen pieces of corn?”

Though the land here in the northern Piedmont is mainly flat, when Rudd pauses at the corner of his cornfield, I get the sense that we’re atop some huge, sloping hill. It’s hard to get big sky like this in my regular life. My first grader, The Toad, takes in the rows of corn, which must seem to him like they stretch on forever. “It’s not eighty-sixteen,” he tells his brother, voice shot through with awe. “It’s definitely three billion.”

Rudd laughs again, and with his bright blue eyes blazing, he steps one row in, pulls a ripe ear from a stalk. He hands it to The Toad. “You know what you’re doing?” Rudd asks.

“Of course,” says The Toad, but he doesn’t. Rudd, ever patient, helps him shuck the ear, pulls another one for The Wee, and then my city kids are eating corn not even 60 seconds off the stalk.

My mother often speaks with what I can only call religious fervor about sneaking next door when she was a child and “eating Farmer Beard’s tomatoes right off the vine.” I’m still not sure if there really was a farm next door, or if her neighbor was maybe just an avid gardener with an aspirational nickname, but here on these Rudd Farm acres, my own kids are experiencing what looks like transcendence. They have sudden access to the truth. They have fresh sweet corn.

“Used to be, three or four acres of tobacco could pay for a year of college,” Rudd tells me, while the boys tuck into their third, fourth, sixth ears of corn. “We only started strawberries because of the traffic out here on the road. Then the buyout came, and Ken Jr. majored in new crops —” Rudd shakes his head. “We always thought tobacco was hard work until we started vegetables.”

Rudd Farm now sports a sprawling pick-your-own strawberry operation and a huge on-site produce stand, and sells the full suite of summer and fall vegetables seven months out of the year. Back at the stand when we came in: peas, okra, squash, beans, T-shirts. A bounty. The farm’s a true family operation, fourth-generation with three still working in some way or another. And here comes the newest generation, Rudd’s grandson, chugging up the hill on an ATV. The boy can’t be more than a couple of years older than The Toad. “Daddy!” The Toad says, eyes very wide. “That’s a kid driving that!”

And while I won’t let him drive, I do let the boys climb all over a tractor while I try to pick up the husks they’ve left everywhere. I feel a little lost in that field, though at the same time right at home. Farming suggests a life more connected to the earth, to our food, that a good part of me covets.

I’m still inside the dream after I’ve thanked Kenneth Rudd and we’re walking to the car, day cooling into evening. I’m holding both boys’ hands. They’re chattering away, saying the corn tasted like candy. “I’m going to grow up on a farm someday,” The Toad announces, and The Wee hops in long-form about how he will, too. I buckle them back into their seats, back into their lives, and I tell them, “You know what? Sure. That’s fine. Maybe I will, too.”