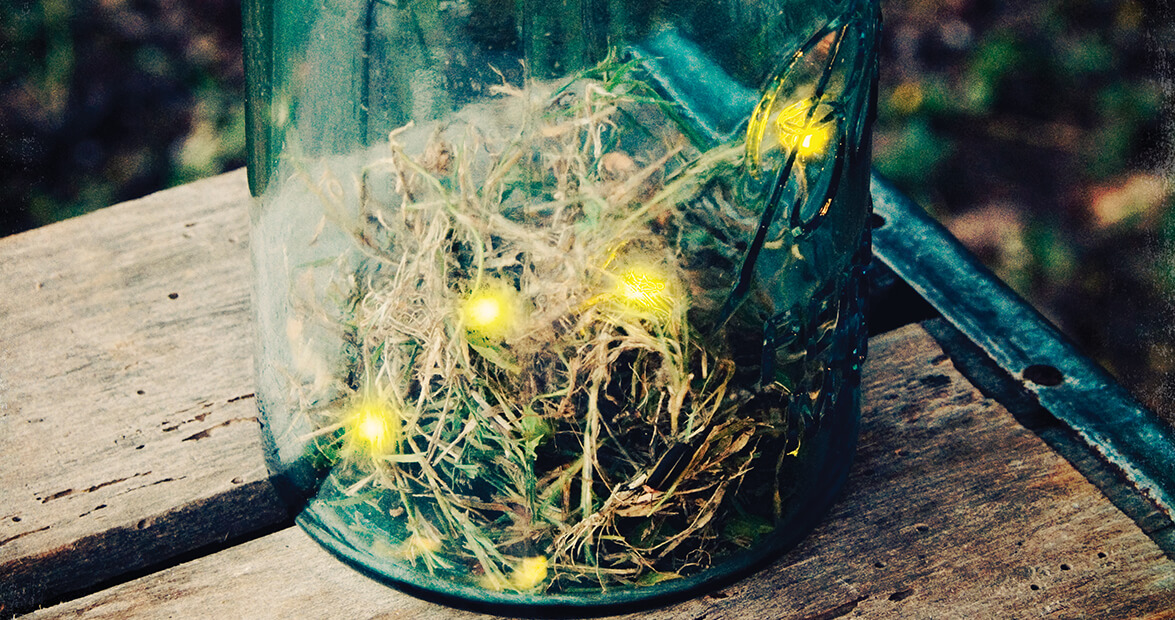 Editor’s Note: This story originally appeared in the August 2011 issue.

In total darkness, eyes don’t adjust. Blackness stays black. Josh Rosen stands about a foot away from me. I know this only because he’s talking. “A little bit of rain is a good thing. They prefer moist environments. But if it’s raining very hard, they won’t come out. The raindrops will knock them down.”

Rosen, an environmental scientist and our expert on this night in late May, is telling the group gathered in DuPont State Forest some of what he knows about blue ghost fireflies, a tiny beetle that shows up in only a few places on the planet. Transylvania and Henderson counties are two of those places.

The rain’s been coming down pretty hard. But now, after dark, it’s slowed almost to a stop, and only an occasional spike of lightning brightens the clouds. Rosen has told us where to look for the fireflies, right above the ground just off the trail. If we’re going to see them, it should be any time now. They’re thickest between 9:30 and 10:30 p.m.

Then, just about the time that I start to feel a little dizzy because I can’t see the ground or trees or sky or anything that would tell me up from down, I see one. It is tiny, and I wonder if it’s my imagination. Then I hear: “I see one!”

The glow hovers about three feet away at ankle height. Unlike the fireflies we chase in our front yards, this one stays lit for several seconds, sometimes as long as a minute. It doesn’t twinkle so much as streak. And although the blue ghost — named for its bluish cast — is the size of a piece of rice, its light illuminates brush and trees and helps me reconnect with the solid world around me. Soon, several float among the leaves.

One bounces off my poncho. I begin to understand why these little beings create such a hullabaloo among the lucky few who’ve seen them. They’re beautiful. Cerulean halos, like a scattering of Tinker Bells, glide through the mist. Rosen describes evenings when he’s seen hundreds of them blanket a hillside or slowly dance around tree trunks.

I hope for such a show, but my count totals less than a dozen when heavier raindrops fall. The blue ghosts sputter out.

I first chased fireflies on Wilora Lake Road in Mecklenburg County. That was 40-some years ago, back when it was out in the country, before the city of Charlotte swallowed it, before convenience stores and shopping malls rolled over 100-acre stretches of farmland and woods, before streetlights flooded front yards.

My parents owned three and a half acres. A stand of trees sheltered the property on one side of our small house; an open field sprouted along the other. I’m not sure why, but my dad — or rather my brothers Paul and Joe — kept the field, about an acre, mowed for years. By the time I came along, Dad decided to let it go. For most of my childhood, it remained mostly a wild patch of tall grasses growing up around blackberry brambles, a hedge of roses, and a trio of mimosas.

The fireflies — we called them lightning bugs — showed up in the field first. My sister Suzanne and I usually made our way home to our own yard by the time the first yellow twinkles caught our eyes. While playing in the weeping willow in the backyard, we saw them first over the field. Soon, they lit up just above the grass under our feet. And the chase was on.

Wait for the blink, then rush toward it. Lock in on it; follow it, hands cupped; scoop; and capture. Squint at it through your fingers. Open your hand, and watch it walk to an edge and fly away. This is how we end a summer day in the South. To wait for the sun’s retreat, then to slip barefooted across dew-cooled grass in pursuit of a natural phenomenon that seems to exist for no reason other than our delight.

By the end of summer, the lightning bugs were gone. And by the time I was in middle school, so was the field by our house. My parents gave the land to my grandmother, who moved up from Florida to be closer to my mom and built a house there. I was happy to have her nearby, but, man, I hated to see that field go.

But things change. The city had started creeping in, widening roads and putting up lights. A mall paved over the wooded acres. The glow of a lightning bug got harder to see.

First described in scientific literature in 1825, the blue ghost — Phausus reticulata — shows up in several Southern states: Georgia, South Carolina, Tennessee, as far west as Arkansas. But Rosen, who in 2010 coauthored the first published paper on the insect in more than 40 years, says the blue ghost shows up in large numbers in the Appalachian Mountains, especially in DuPont State Forest. Here, he says, they find what they need: an undisturbed site with a cool, moist, shady environment and ample water.

The forest, located between Hendersonville and Brevard, is 10,400 acres of blue ghost habitat. On most of the land, hardwoods shade thick underbrush. Lake Julia sparkles down in a valley, and the Little and Grassy rivers course across the land and over eight waterfalls.

Before it was a state forest, most of the land belonged to DuPont Industries, which, in 1957, built a huge plant here that produced high-purity silicon for the electronics industry. Later, the plant manufactured medical X-ray film. During its ownership, DuPont maintained the forest as a recreational site for its employees and people in the community.

But by 2002, the plant was closed and disassembled and hauled off the property. Not long afterward, a developer bought a large tract of the land.

Then residents learned that the forest they had retreated to for decades was about to be turned into a gated community. Nineteen of those residents decided that couldn’t happen and formed The Friends of the Falls.

“We banded together and staged a PR campaign,” says Aleen Steinberg, one of the original Friends and the leader of my blue ghost tour. “We got civic groups involved; the Audubon Society; and scouts, hunters, and fishermen. We sent more than 4,000 emails and letters to the governor’s office.”

Ultimately, the state condemned the land and settled with the developer to purchase his original tract.

“Our rallying cry was ‘Save it for the people, not the privileged few,’” Steinberg says. “I put my heart and soul into saving this land.”

For nearly 50 years, Steinberg has been trekking across it. She and her family discovered the forest while on vacation in 1963. Its beauty enchanted Steinberg and her husband so much that they bought a second home here. Steinberg moved from Florida 13 years ago and today spends much of her time in the forest. Volunteering with The Friends of DuPont Forest, which evolved from The Friends of the Falls, she maintains trails; leads hikes; staffs the visitors center; and each spring, guides two or three blue ghost tours into the woods.

Her voice catches when she talks about the importance of this place. “As long as I have breath, I’m going to work so people can get in there,” she says. “I want to be able to walk past all the gates and go into heritage lands that hold endangered species and to know they’re going to be there for generations to come.

“It isn’t just botanists who go in there and run their hands over that lichen that they know is going to be there. It’s all of us. It belongs to the people … and I’ll do what I can to protect it. If it’s standing in the rain looking for blue ghosts, so be it.”

Even in this pristine, environment, you find only pockets of blue ghosts. The tour took us not quite a mile up a gravel road and about 200 yards down a trail.

This lightning bug is fragile, Rosen tells us. It lives in the spongy leaf litter on the forest floor. If that litter gets too dry, they die. The female is earthbound. She lights up, presumably so the males can locate her. But even with a glowing abdomen, she’s hard to find. In his years of pursuing the blue ghost in four states, Rosen has observed thousands of males; he’s seen maybe 30 females. If their habitat is disturbed, it can take years for the population to recover.

Steinberg is disappointed by tonight’s weak showing. She wants the visitors to experience the magic of a blue ghost firefly display. She’s witnessed it more times than she can count, and she still gets excited at the sight of a handful of them. But she also knows that any fans she wins over will join those of us who believe we’ll always need woods.

Steinberg plans on bringing out one more group. That’s one more tour than she had scheduled. But tonight’s turnout — in terms of people and beetles — won’t do. Twenty-five people signed up, but the rain and lightning kept away all but a hardy few.

Blue ghosts don’t hang around for long. They flicker through DuPont State Forest for only about four weeks, starting in May. By mid-June, they’re hard to find. So Steinberg crosses her fingers and makes plans for one more trek into the woods, one more chance to marvel at a simple, fleeting wonder.