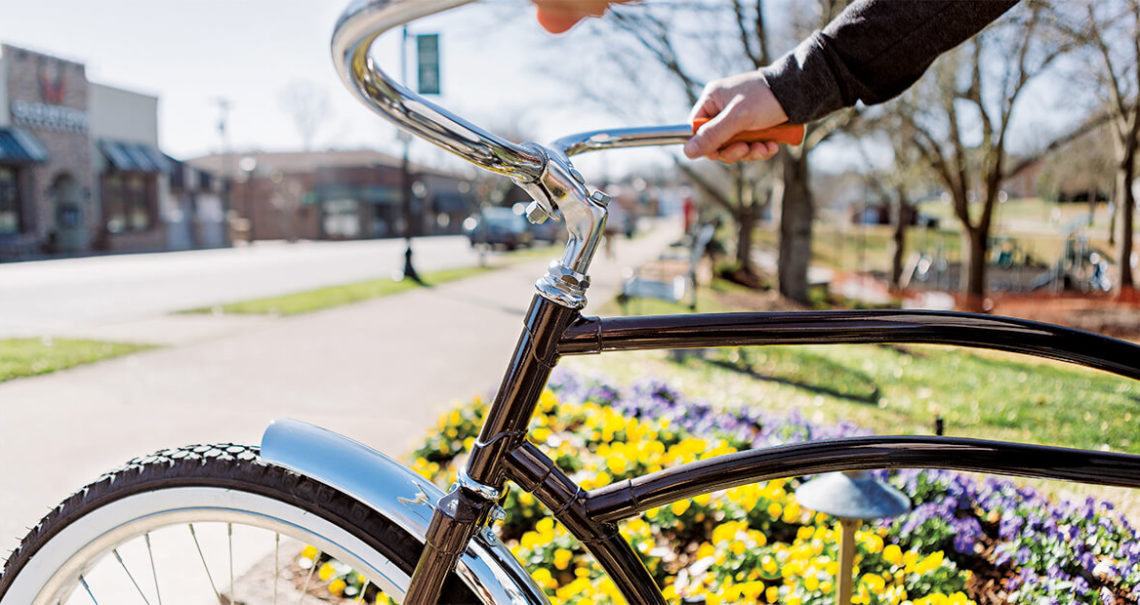 Joel Honorate lugs a three-foot square cardboard box through the front door of South Main Cycles in Belmont and scans the shop for the manager. The worn wood floors are uneven, and sprinkles of old coal dust still drift down from the rafters sometimes. But the interior has been given a modern renovation: Cycling gear adorns the walls, bike stands sit behind two digital registers, and two ceiling fans revolve above the workspace, their quiet whir mingling with the clicking of gears on a bike. A train clanks by on nearby tracks, adding to this symphony of rotating machinery.

The cardboard box is filled with the rusted pieces of a dilapidated, 65-year-old bicycle once owned by Joel’s late grandfather — junk to some, but priceless to Joel. The shop’s manager, Mills Davis, opens the box and marvels at the careful packing. Each piece — crankset, wheels, fenders, frame — has been tightly wrapped, tied up, and taped with care. As he inspects the pieces, he sees beauty, history, and a family legacy.

Joel, 37, has entrusted the repairmen at South Main to return his treasured bike to the way he remembers it. As a boy, he would ride it through the streets of Perico, Cuba, perched on the rear fender as his grandfather José Angel Marrero pedaled from shop to shop. José, known and loved by everyone in Perico, didn’t need luxury to be happy. When most people in town upgraded to a motorcycle or car, he kept his bike. Joel and his grandfather would spend their days visiting Joel’s uncle Cosme Marrero, buying milk and bread from the market, or traveling the 12 miles to a field to collect potatoes that the government hadn’t already dug up — “to feed our family,” Joel explains, remembering his grandfather’s resourcefulness. 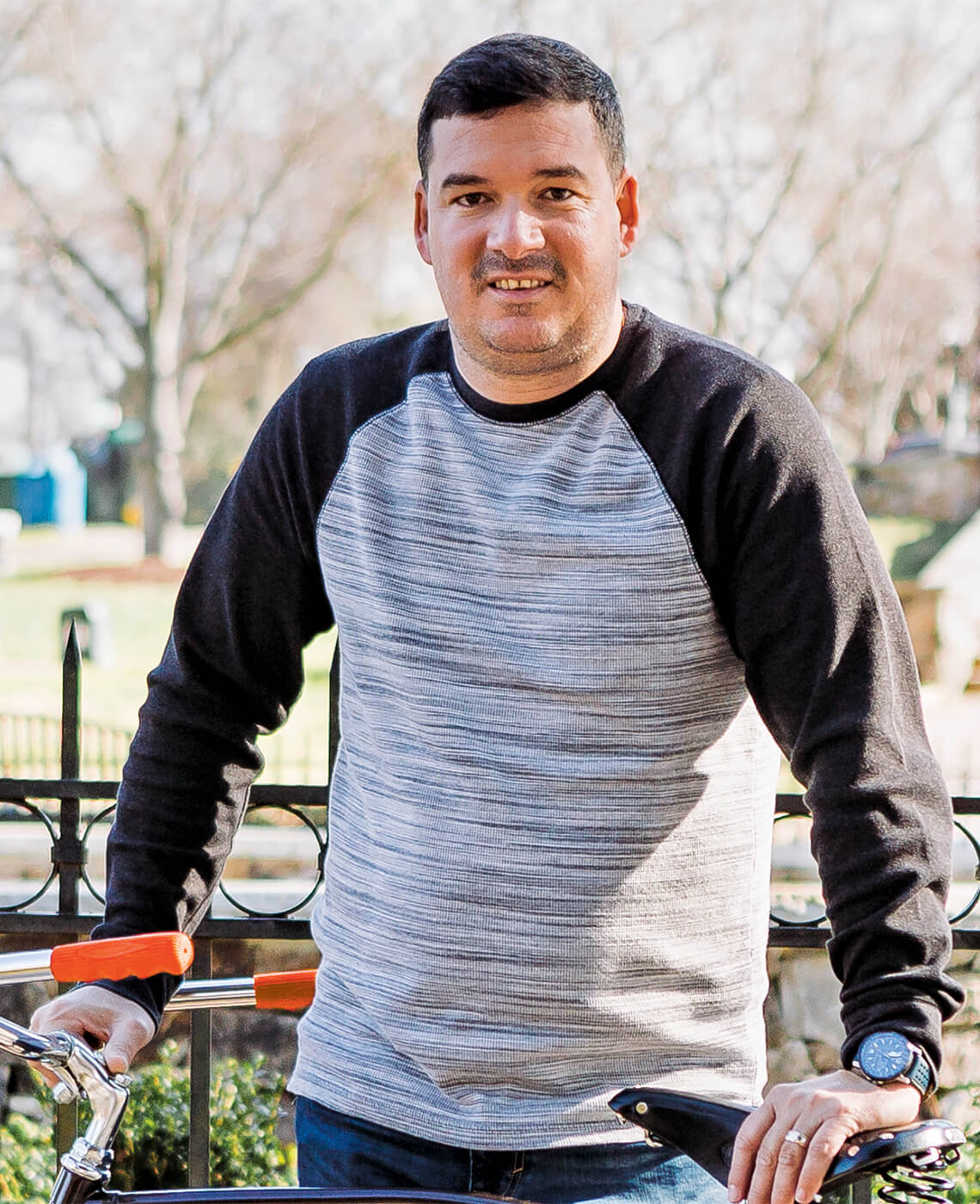 More than a shop, South Main Cycles is a gathering place for bike lovers. Joel Honorate trusted its staff with a precious heirloom.  photograph by Joshua Vasko

In 1954, José had paid 100 Cuban pesos — about $955 in today’s money — for his brand-new, American-made bicycle, possibly one of the last to be brought over before the 1960 embargo. He’d cruise on it to the clothing store where he worked as a clerk, helping to size up customers for pants, shirts, and shoes. José was proud of his well-built bicycle, and he often talked about how easy it was for him to carry his grandchildren around on it. He never allowed his own kids to ride it, but when grandkids arrived, the rules changed. Still, there were limits to what the children could do on the bike: No hard braking, no standing while riding. “This bike needs to last a long time,” he would tell Joel. And, of course, it did. By the time José reached his 90s, he was carrying his great-grandson — Joel’s first child, Joel Jr. — on the back of the bike.

When most of Joel’s family, including José, immigrated to Charlotte in 2009, the bicycle was left leaning against Uncle Cosme’s shed in Perico. “We had to leave it behind,” Joel says. His grandfather died in 2011, and while more and more family members fled Cuba, the bicycle remained, rusting in the Caribbean humidity. The memories gnawed at Joel, who still regrets not spending more time with his grandfather in later years. He wanted something tangible to hold on to and to give to his sons, Joel Jr., now 16, and Iker, 7. “When you leave the country,” Joel says, “the story of your family disappears.”

In 2018, Joel hatched an idea: He’d reach out to Uncle Cosme and ask him to bring the bicycle from Cuba. Cosme was happy to oblige, but he worried that the authorities would question why a bicycle was being flown to the United States. To avoid suspicion, he dismantled it. Using brown paper, twine, and tape, he wrapped the parts individually, and then placed them in the cardboard box for the plane ride to the bike’s new home in Charlotte.

South Main Cycles is itself a kind of newcomer to Belmont, a small town situated on the banks of the Catawba River just 20 minutes west of Charlotte. In 2014, owner and longtime Belmont resident Steve Pepitone relocated the business from a space down the street. He’d gotten a chance to buy the town’s old train station, a two-tone painted brick building that served the Piedmont and Northern Railway in the early part of the 20th century. Those tracks are no longer active, but Norfolk Southern still hurries through town several times a day on a different set of rails.

The shop reminds Joel of the old train station back home. He would travel by train with his grandfather from Perico to visit family in Jovellanos, 10 miles to the west. “The train would stop in the middle to do a line change,” Joel remembers, smiling. “Every time, I’d ask, ‘Why does the train stop?’ and my grandfather would say, ‘We have a flat tire.’”

The old depot that houses South Main Cycles has seen its share of comings and goings, too: busy arrivals and swift departures. It’s no longer a place to wait for a train, but people still congregate here. Locals grab stools and banter back and forth as Mills and repairman Brandon Grant work.

Joel would ride the bike through the streets of Perico, Cuba, perched on the rear fender.

Customers are chatting up the mechanics when Joel arrives with the box. Brandon lays out all of the parts and puzzles over where to begin. He decides that the crankset — the piece that holds the pedals — will require some old-fashioned elbow grease to make it functional again. The crankset and the frame, he determines, are the only salvageable original parts. He’ll have to replace the wheels and fenders, the seat post, and the bearing sets.

Brandon works on the restoration for eight weeks, consulting with Joel the whole time. He’s given Brandon freedom to experiment, but it’s important to Joel that they get the color right. He remembers the bicycle being brown, but according to Cosme, it started out purple. Joel eventually decides on a brown-based paint with flecks of multicolored metal, a color that flips between brown and purple, depending on the light.

The team runs into a challenge determining the bike’s make. There are no logos on it to identify the manufacturer. But with its townie handlebar and lugged steel frame, it resembles a beach cruiser.

The seat needs to be replaced, so Brandon looks to the European company Brooks England for a handmade black leather saddle with black loop springs, similar to the one that probably came on the bike. For the handlebar grips — once a vibrant orange but now cracked and rotting — the team finds new orange rubber grips with a classic ergonomic design.

When Joel gets the call that the bike is ready, he and Cosme wait until Joel Jr. returns from school to go pick it up. It’s a bright Monday afternoon, just right for pedaling around downtown — a perfect day for starting anew. As they make the half-hour trip from Charlotte to Belmont, Joel, Cosme, and Joel Jr. share jokes that José used to tell. 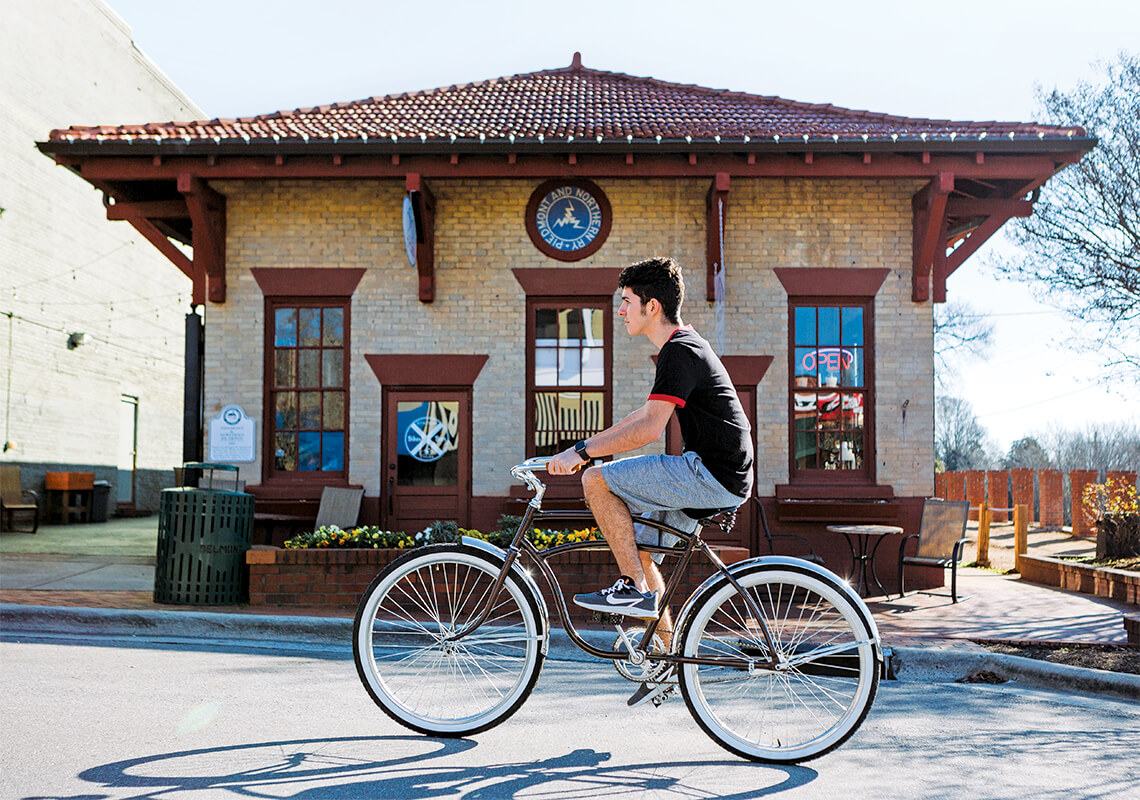 When the restoration was complete, a fourth generation, Joel Honorate Jr., took the bike for a spin outside the former train depot. photograph by Joshua Vasko

When they arrive at the shop, Brandon greets them with a holler from the storage area: “Are you ready?” He wheels out the bike, and for a moment, no one says a word. Joel’s stoic demeanor fades away as he watches for a reaction from his son. Joel Jr. appears concerned when his dad offers him the first ride. What if he scratches the bike? Joel laughs it off. “You’ve ridden a bike before,” he says, so Joel Jr. jumps on the saddle and pedals away, his father and great-uncle watching from the wooden platform next to the shop.

Joel Jr. rides around the breezeway between the old train station and The Mercantile Barber Co., making loops on the green pavement, and weaving between tables, bike racks, and planter boxes. The bike rides like new. When he’s done, the three load it into the back of their truck and head back home. “We did it,” Joel says. “We accomplished it.”

The rehabilitation of the family’s beloved bicycle signals renewal. Soon, a new generation will create new experiences: cruising along the greenway in Charlotte, cycling across town, racing friends down the street.

“It’s not often that you see a project that is so meaningful,” Brandon says. “Seeing Joel’s son test out [this bicycle] in the parking lot was incredible. He was gracious enough to let us bring it back to life.”

In the end, the team has restored much more than a bicycle: It’s a family heirloom filled with memories of a birthplace lost and a new home gained, put together again in a little Belmont bike shop that once served as a train station. Four generations on a continuing journey.