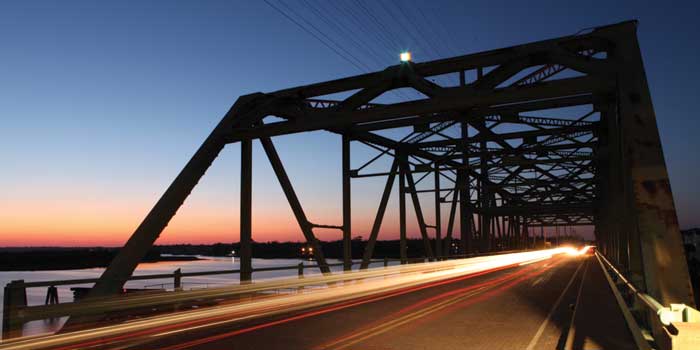 Crossing the swing bridge at Surf City, Renee Giles hears a sound so distinct she’d sooner confuse a train whistle for a birdcall than mistake it for something else. Just now the soothing hum of tires against pavement became a small roar. It alerts Luke, her black Lab in the backseat. He lifts his head from a long nap and looks to Giles and her husband in the front. Their eyes are fixed on the road ahead, and their ears are listening. Beneath their car, the grooved surface of the bridge makes a ruckus as their tires roll forward. It’s a grating but wonderful noise. Really, it’s a greeting that says, “Welcome to the beach,” without saying a word. The Gileses have driven 11 hours to hear this sound.

Outside their car, steel trusses rise on both sides and form a canopy overhead. They’re splotched with rust that disguises sea foam green paint, seemingly to reinforce the axiom that beauty is the price old age exacts. This is the framework for the bridge.

But its appearance doesn’t affect its function — a mark of a good piece of infrastructure. At its core, the essential elements — concrete and steel — make this bridge a sturdy one.

It still lifts families, like the Gileses, up over the Intracoastal Waterway that separates Topsail Island from the mainland. And it still turns, the whole thing, to allow boats — from business barges to pleasure yachts — to pass through the channel that shields them from the unpredictable fury of the ocean.

The swing bridge is reliable, trustworthy, and to the newcomer, unspectacular. But imagine yourself in the shoes of Renee Giles, who first crossed the swing bridge in 1960. Imagine that your family, like hers, has crossed over and into Surf City, onto Topsail Island, for six generations now. So many buildings have come up out of the ground in that time — houses, mainly. So much has changed — believe it or not, before the 1940s farmers sent their cattle to the island to graze. And yet so surrounded, the swing bridge stays the same.

But the plans are on paper for a future without it. There’s a rendering of what its replacement might look like: A new bridge rising 65 feet high — enough clearance for nearly any ship no matter its height. The plans say this will allow traffic, marine and vehicular, to flow smoothly.

If true, that’s a real advantage because to a lot of people — eager vacationers and earnest emergency workers among them — the swing bridge is an obstacle. In the summertime particularly, cars, trucks, and SUVs can snake and snarl for miles on either side of it.

Locals long ago started planning their travel, coming and going, to avoid the top of an hour. Because they know when a clock’s minute hand completes a revolution, the stoplights will turn red, the candy-cane-colored crossing gates will come down, and the traffic will stop.

Then a series of metallic creaks and clanks will echo off the water. Then, slowly, the swing bridge will begin to turn. It’ll rotate on an axis until it sits perpendicular to the road, the one named Roland Avenue, which leads people to and from the island.

Giles knows all this. She began traveling to Topsail Island with her family as a child.

“My mother and I had our car packed on Friday afternoons,” she says, “and we just waited for my daddy to get home from work.”

When he finally arrived, the family piled in the car and started heading east out of small-town Wade, outside of Fayetteville, and toward the swing bridge. They were heading toward one place and leaving another.

The swing bridge helped deliver that escape. It was an emotional gateway that Giles eagerly anticipated.

As the family car drew closer and the green trusses appeared on the horizon, expectation quieted any conversation in the car. There was silence for a moment and then, just as the front tires crossed onto the bridge, a roar.

Lynn Farrell imagines nearly everyone who crosses the swing bridge listens for that sound.

She watches cars come and go, onto the island and off, from the second floor of a square, gray building on the eastern edge of the bridge. From here, Farrell has a bird’s-eye view of everything around her: the bridge, the waterway, the marshland, and Surf City. Somehow, she manages to keep an eye on it all.

As morning light floods in through the windows that surround her, she lifts a pair of binoculars for one last check of boat traffic.

The N.C. Department of Transportation pays her to be the lookout and, when needed, to negotiate an accord between the interests of road travelers and mariners. She’s a bridge tender, one of five at Surf City. 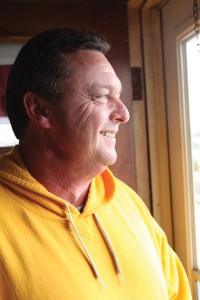 This morning Farrell is about to head home. Her night shift is over, and Jimmy Ligon is here to pick up the job. Someone is on hand 24 hours a day, every day, to make sure that things are as they should be: steady.

Between the two of them, Farrell and Ligon have 26 years of experience operating the swing bridge at all hours of the day and night. After all that time, you might say they’ve become its voice. When boaters contact the bridge house, the bridge tenders communicate back, by phone, radio, signal, or even flags.

And that’s how a relationship forms. Especially with the regulars, such as the snowbirds — the folks who sail south in the winter pursuing warmer climes and then sail back north in the spring.

These seafaring passersby will radio to say hello, and some have even been known drop off gifts.

But to the motorists crossing the bridge, its tenders are a mystery; a bunch of unknowns who occasionally disrupt traffic to put a vintage mechanical marvel to work.

A good bridge tender knows her clientele, however. Farrell can look at a car and tell you who’s coming to the island and for what purpose. There are the weeklong vacationers with luggage strapped atop their cars, the weekenders carrying a lighter load, the retirees, the church groups, and the repairmen.

“You can learn a lot just by watching,” Farrell says.

Bridge tenders like her have witnessed almost the entire history of Topsail Island.

But for a brief period in the ’40s and early ’50s when a pontoon bridge connected the mainland to the island, the swing bridge has made island life possible.

When it opened in November 1955, it made it possible for an island 26 miles long to open to development — at first in a series of fits and starts, with cheap land and small, efficient housing. To the people who came to fish, or spend a weekend, it was wonderful.

Then the north end received a high-rise bridge, and resorts and condos started going up there. But Surf City, and the town to its south, Topsail Beach, remained small and comfortable and familiar.

Giles is among the latter. She now owns a beach cottage her father bought on the south end of the island. It was built in 1950, has two window air conditioners, and floors made of hardwood pine. It’s simple, but significant. Because from her time as a college student at East Carolina University to when she lived as far away as Minnesota, Giles has seen this cottage as a quiet place to slip away.

Now that she lives in New York City, it’s as vital as ever. She thinks about it a lot. A painting of the cottage hangs in her home in the city. A friend had it made for her. Giles came up with a few phrases she wanted imposed on top. They’re just a few evocative words that connect her to a place she loves faraway, down south on North Carolina’s coast. One of them reads, “crossing the green bridge.” 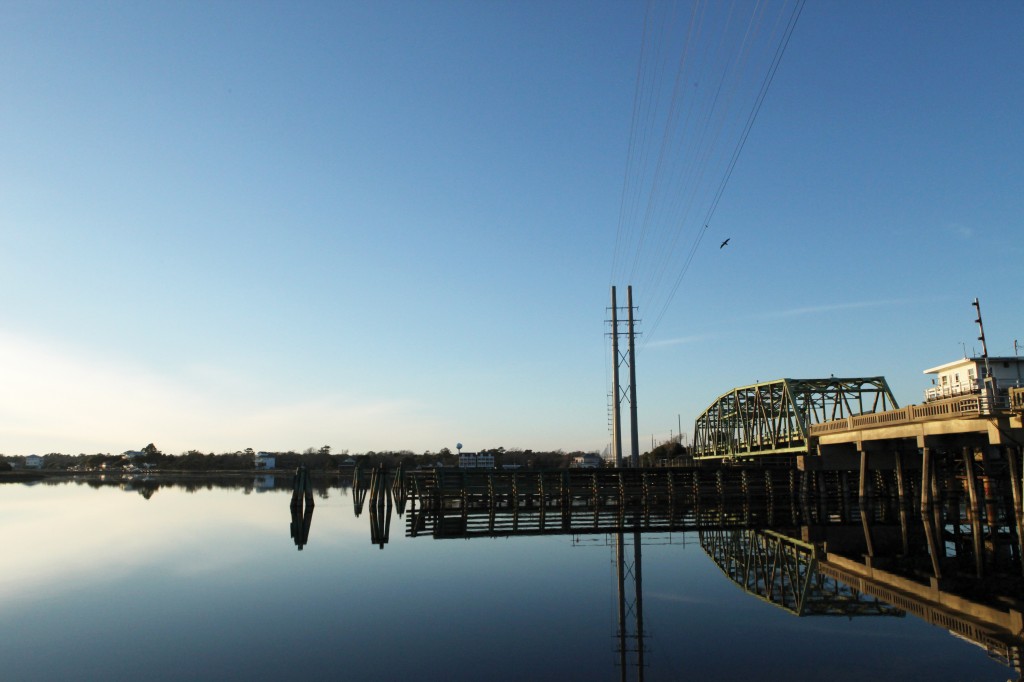 A day will come soon when the last car crosses the swing bridge and its tires sound out a final roar. Then people will wish it wasn’t so.

Ligon says he’ll cry the day it happens. Not because he may be out of a job, but because the swing bridge captured so many imaginations.

“My niece can’t wait to visit me every summer because she thinks it’s the coolest thing on earth,” he says.

It is pretty cool, and historic. Because of that town leaders in Surf City hope to keep it. They have an idea to preserve the swing bridge in a nearby park. It would sit in the shadow of its replacement, where all the traffic would whiz by high above. For a busier island, and a faster life, the new bridge will be more appropriate.

At Our State’s request, the town of Surf City asked people on Facebook for their thoughts about the bridge. Here’s some of what they said:

“Our family beach house was purchased in the ’60s and four generations of us have been crossing this bridge for unforgettable beach weekends since then. The bridge symbolizes my greatest childhood memories.”
— Sarah Banks Johnson

“To most, the swing bridge is no more than its name implies. There’s rust and creaks and groans, and every once in a while you get stuck at the traffic light while boat traffic glides through the Intracoastal Waterway. But to someone with family on the island, it’s a gateway. It’s a window to my peace of mind. It’s the front porch to home, a place you can always come back again.”
— Jake Potter

“I remember visiting my grandmother, Katie Batts, as a teenager. She lived on the Intracoastal Waterway. Us girls would be on our way out of the door to go to the island and she would stop us. ‘Wait — look out of the window to see if the bridge is open before you head out!’ We loved and still love that bridge. My mother, Deborah Batts, recalls being allowed to ride on the bridge when President Kennedy’s yacht passed by. They did not see the president, but the Secret Service men waved at them. My fondest memory of the bridge was when my grandfather Sonny Batts died. We were on the way to church for the funeral, and the light for the bridge had already turned red. The bridge tender knew my family and let us through. I felt so important.”
— Missy Coates

“I am originally from Duplin County and currently reside in Pitt County. I was born in 1949, the year Surf City was incorporated, and have never missed a season. My parents used to go over on a barge when there was only a little cracker-box store at the south end of the island. They could get a soda for 5 cents. That was, of course, before the bridge. The bridge is iconic and a real part of Topsail Island. I hate to see it go. My father died in March 2005 at 84 years old. That day he was planning a trip to the island. My mother is 85, and we are planning a return to begin the season. We love that place, and the bridge holds a special place in our hearts.”
—Althea Evans McNairy