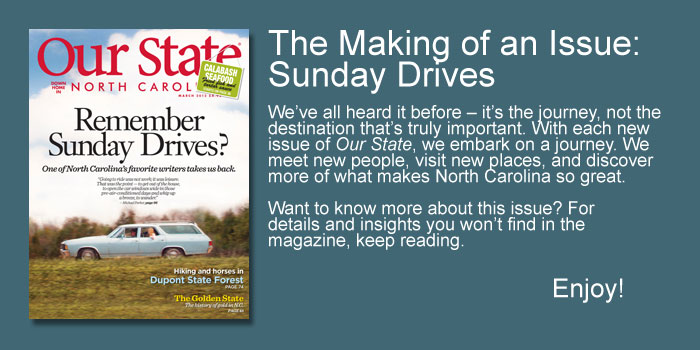 We’re often asked how we come up with the stories published in Our State. This month, we heard about the extraordinary Randall B. Terry Center at North Carolina State University through a letter from one of the veterinary hospital’s dedicated volunteers, Terry Seaks. Terry told us about the two oil paintings of his cats, Fluffy and Snowball, that hang in the center. “They lived long lives after professors and students at NCSU saved them. Fluffy had lung cancer cut out at age 13 and lived to be 21. Snowball was saved from a rare but curable heart ailment at age 8 and lived to be 16.” We were so touched by Terry’s appreciation for this place, and we recognized that our readers would be, too.

We learned about Philip Woodward, from the North Carolina Division of Vocational Rehabilitation Services, when Our State editor, Elizabeth Hudson, attended the North Carolina Governor’s Conference on Hospitality and Tourism two years ago. Philip sat down with her to talk about the project he was working on, an access guidebook for attractions for people with disabilities. Philip is deaf, and he was traveling with an interpreter. He’s made it his mission to expand North Carolina into a place for all people, regardless of disability, and we were thrilled to finally be able to showcase his story.

And when we read Michael Parker’s essay “To Ride,” about the spirit of a Sunday drive, we asked photographers Joey and Jessica Seawell to find the perfect vintage car for our cover. Joey and Jessica called several car clubs, dealers, and collectors with no luck. Then, they posted on Facebook that we were looking for a 1970s-era station wagon, and jackpot! James Hinshaw in Burlington had just what we were looking for – a 1972 Carolina blue Chevelle. The next step was to find a location to shoot. Joey and Jessica stumbled across the perfect location while, fittingly, driving aimlessly one afternoon. Larry Apple in Gibsonville was generous in allowing Our State to drive a car up and down his dirt road for our cover.