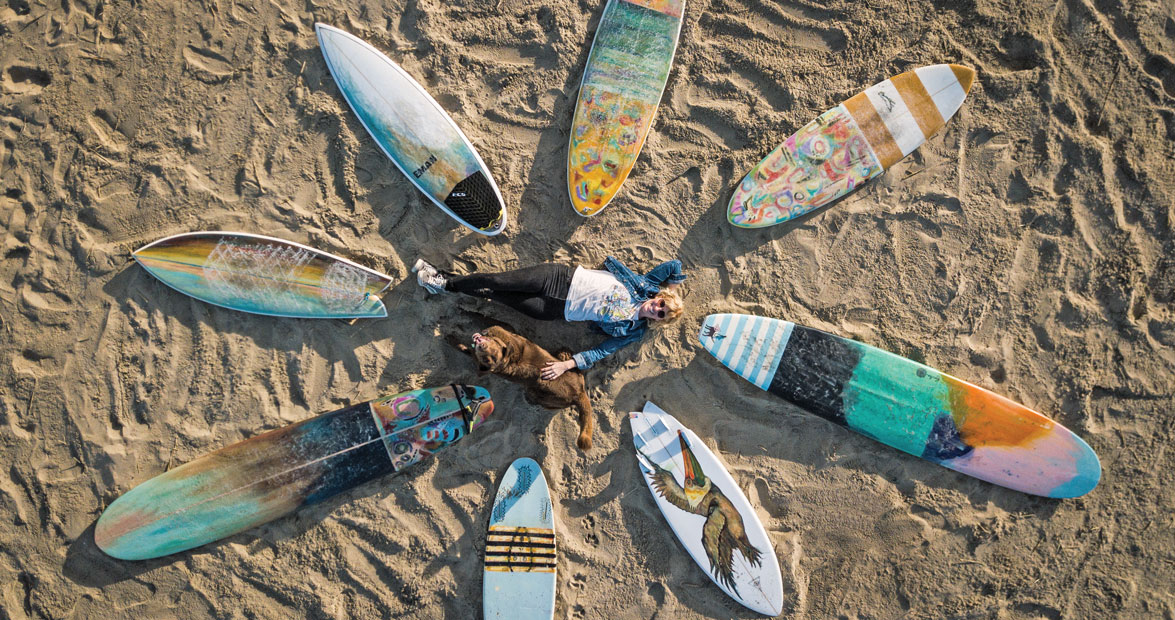 They wake in darkness and reach for their phones to scroll through surf reports, weather updates, and beach cams. But the Internet can only tell them so much about waves resculpted daily by tides and wind, and a sandbar constantly in motion. The rest they’ll have to see for themselves when they meet up near Jennette’s Pier: four middle-aged men squeezing into wet suits and waxing boards. As the wind hits their skin, they note its velocity and direction.

Theirs is not the biggest, strongest wave around. It will not appear on the cover of Surfer magazine. Here, on the fine edge of the Outer Banks, the Atlantic offers a working man’s wave, reliable and steady. And when these early risers catch a ride, they feel on top of the world. They take turns and share waves, whooping and hollering for each other. At this hour, along this stretch of coastline in Nags Head, competition doesn’t exist. To paddle out is to have already won. Everything that weighs these men down is left on solid ground. For heads congested with summer colds, worries, or regrets, a dawn session is the best remedy.

They are, however, breaking the law: Surfing too close to the pier is illegal — and irresistible. Pilings break the intensity of the wave and create a narrow channel — a liquid moving sidewalk that deposits surfers in deep water, their hair as dry as it was on their pillows. As they bob on their boards, waiting for the next set, a glistening fin cuts between them. Adrenaline surges, but only for a second: The rolling black arc is a dolphin. Meanwhile, on the horizon, the sky blends into the silvery sea, as if made of mercury. When the sun breaks through where water ends and air begins, they tell themselves: Just one more. Then it’s off to work.

Later that day, a few miles down the road in Kill Devil Hills, longboarders catch gentle chest-high waves while locals watch and cheer from the beach. This is called mind-surfing — and for diehards, it’s the next best thing to being in the water. Dawn Gray Moraga smiles, her cheeks pink from sunburn, as her friend catches a ride. Dawn’s curly blonde hair is pulled back into a sloppy wet ponytail, and her suit is still damp from her own surf session. In a moment, she’ll paddle back out. 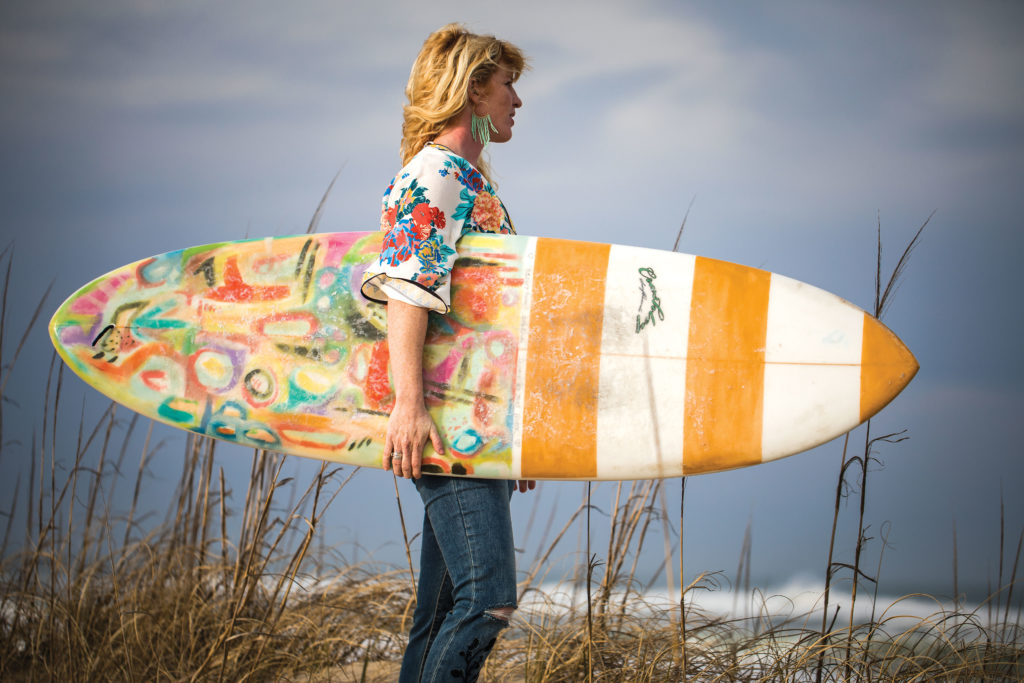 Artist and surfer Dawn Gray Moraga uses boards as her canvas. Her designs are on display in the waves near her home in Kill Devil Hills. photograph by Chris Hannant

Dawn caught her first wave at 16, a feeling like falling in love, she says. That was 20 years ago. An avid horseback rider, she discovered that surfing gave her the same exhilarating connection to wildness and freedom. Waves and horses humble her and command her respect. In both, she sees the beauty and power of God. As an artist, she draws inspiration from this watery world to create bright, whimsical beach scenes on canvas or fiberglass, partnering with Ashley Linnekin, the Outer Banks’ only female board shaper. “The joy I express through my art comes from my time in the water,” Dawn says.

Standing beside Dawn is another familiar face in these parts, Tony Gray. The shock of purple in his dripping gray ponytail was colored by a local hairdresser in exchange for surf lessons. He rode his first North Carolina waves 66 years ago, back when his family lived above their own small shop in Nags Head, and he and his brothers spent long, unsupervised summer days at the beach.

“Hey, Tony,” a local teases, board tucked under his arm. “If you surfed as much as you talked, you might actually catch some waves!”

“That is the damn pot calling the kettle black,” Tony calls back with a grin. The people on this beach — men and women, young and old — behave like one extended family. Surfers might find bigger waves elsewhere, but it’s hard to imagine a more tight-knit community than this one.

With waves, it’s feast or famine. When they disappear, wave-starved surfers head to Banks Surf Supply, 100 yards from the beach in Nags Head, where a dorm-style fridge beneath the register is stocked with cold beer. Owner Todd Kleban has been known to grill hot dogs in the parking lot, and all are welcome. Like a classic soda shop, this storefront is the hub, the tribe’s beating heart, where surfers gather to shoot the breeze, shop for boards, replenish their stash of locally made sunscreen, or maybe pick up a small gift of resin jewelry, made by a local surfer. 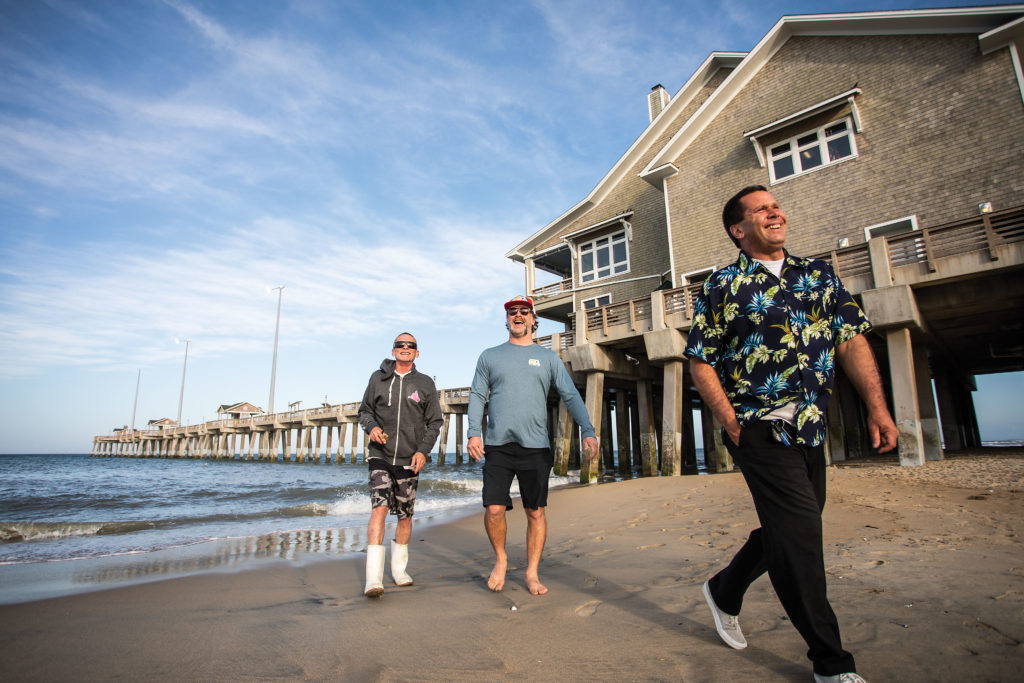 Outer Banks locals (from left) Paul Rotchford, Todd Kleban, and Frank Overton Brown III surf together as often as they can. photograph by Chris Hannant

Todd, 43, fled his corporate life in Charlotte more than a decade ago, and opened his dream surf shop in 2016. On this particular afternoon, he’s hanging out with Frank Overton Brown III, a 52-year-old Realtor and ordained minister who marries barefoot couples on the sand and paddles out to scatter the ashes of departed surfers, and Paul Rotchford, a 52-year-old construction worker, who, each year on his birthday, catches the same number of waves as his age. (Last year it took him six hours in three separate surf sessions.) They’re full of stories, good-natured ribbing, easy laughter. But when asked what surfing means to them, they fall silent. It’s hard to put into words.

“Look, life is not easy,” Todd says after a pause. “But at the end of the day, it comes down to this: Did you surf?”

In summer and fall, surfers follow the storms. When hurricane season blows through, so do countless riders, making their way down the East Coast to the wind-tossed Outer Banks. Many of these pilgrims can be found in the water near Avalon, the fishing pier that juts out 700 feet near milepost 6 in Kill Devil Hills. The large parking area along the shore makes it easy to bring beach chairs, drinks, and snacks for the show. On weekdays at lunchtime, surfers often forgo their midday meal to catch a ride near this popular pier.

Strung with lights and decked out in aqua blue paint, this frozen yogurt shop offers a bright welcome to those looking for a cool treat — or a surf report. Owners Jesse and Whitney Hines opened the fro-yo shop in 2012, just as Jesse’s pro surfing career was winding down. “We wanted to do something that could bring joy into people’s lives,” Whitney says, and they’ve done just that: When Hurricane Matthew devastated the Spoon in 2016, the community raised nearly $18,000 to help the Hineses bring it back.