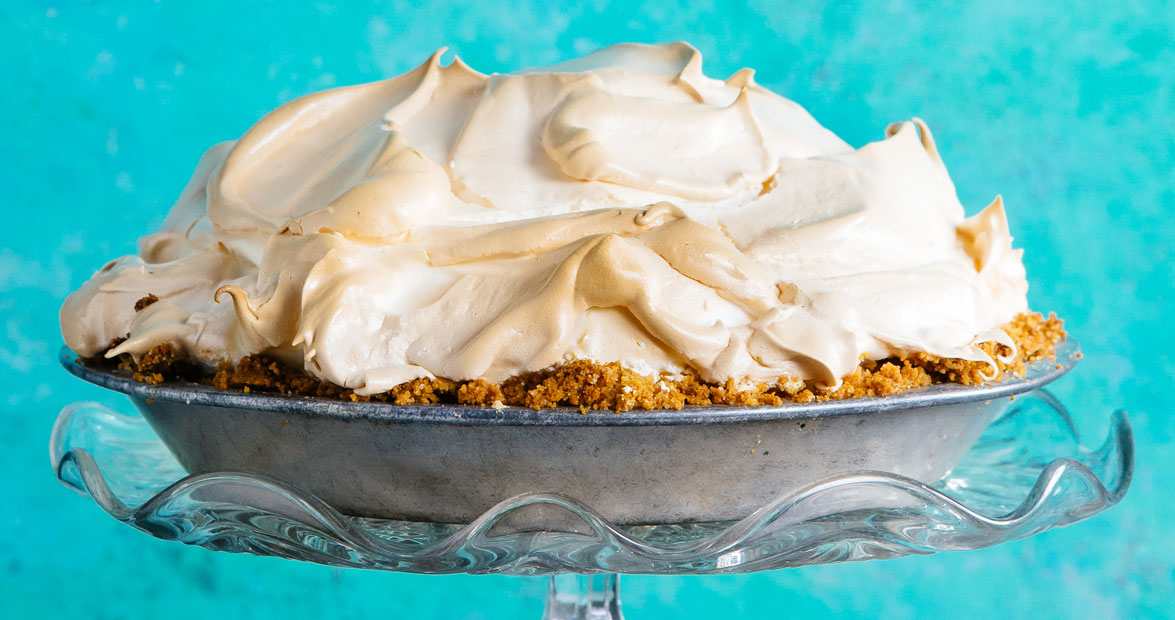 Meringue is a diva. Sure, she looks like a million bucks and delights her admirers, but when it comes to getting her ready to go on stage, she’s demanding. Made well, meringue is agreeable, feathery-light, and ethereal as a sweet dream. Slip up, and she can turn mean: all gummy, deflated, and ready to weep.

Home bakers should take heart, however: Compared to other lofty goals in the world of fancy confections, anyone can master meringue, the delicious epitome of pie prowess. The secret is courage. Risk making bad meringue until you can make only good meringue by rote. Learn her ways and do as she asks, and your meringue will be a star.

Prep first. For best results, use fresh eggs. Most recipes assume or specify large eggs. It’s possible to use store-bought cartons of pasteurized commercial egg whites, but it takes considerably longer to beat them into the desired volume.

The bowl is just as important, don’t forget: For the loftiest meringue, use a scrupulously clean and dry glass, ceramic, or metal bowl — never plastic. Egg whites inflate a lot, so use a big bowl. Some bakers take the extra step of sloshing a splash of vinegar and a pinch of salt around in the bowl to remove every trace of grease or errant fingerprints. If you do this, just pour out the vinegar and salt without rinsing the bowl.

Accept the quirks. Meringue will not tolerate a speck of egg yolk sullying the whites, so separate eggs one at a time into two small bowls — one for the white and the other for the yolk — and then pour the white into the mixing bowl. That way, if you break a yolk, you’ve contaminated only one white instead of all of them. Remove any bits of shell with a spoon, rather than your fingertips. Eggs separate more easily when chilled, but they whip to higher volume at room temperature, so let the whites sit for 15 minutes before you turn on the mixer.

Start slow, be sweet. Beat the whites on slow speed until they’re a little foamy, and then increase the speed to high. Don’t add sugar until the whites begin to take shape, and then add it a heaping spoonful at a time. Meringue needs some structure and strength to be able to hoist up the sugar. For relatively soft meringue to top a pie, use 2 tablespoons of sugar for each large egg white.

Stay strong. Sturdy meringue benefits from a bit of acid, which makes it less likely to break or separate. It also helps the meringue have a paper-thin outer crust encasing a soft, sticky interior. That’s why cream of tartar, a derivative of tartaric acid, is often added: A little goes a long way, so use a scant one-eighth teaspoon for each large egg white. You can substitute a half teaspoon of lemon juice or white distilled vinegar for each egg white, if you prefer.

Most pie recipes call for meringue whipped into firm peaks, meaning that the meringue forms sturdy little mountains with a bit of a curl at the top when the beater is lifted out of the bowl. Soft peaks slump over, while hard peaks stand at attention in points. It’s possible to overbeat meringue, which causes it to separate into dry clumps atop wet liquid. There’s no turning back then. You’ll have to start over with fresh egg whites.

Finish with a flourish. Pile all of the meringue in the center of the pie and spread it over the hot pie filling. Yes, the pie filling needs to be hot. (It’s best to make the meringue first, so that it’s ready and waiting.) Then, use the back of the spoon to create pretty whirls and peaks over the top. Make sure your sea of meringue extends to the crust, which will make it less likely to shrink and pull away from the edges during baking.

To achieve perfectly toasted meringue, don’t use the tempting kitchen torch, fun as it is. Instead, bake the pie in the upper third of the oven at 425 degrees for five to eight minutes, or until the meringue is golden with browned tips. Let the pie cool to room temperature before serving or chilling.

Alas, plan B. When it’s so humid that the air feels like a damp wool coat in August, forgo meringue altogether. Honestly. Not even a meringue diva can prevail over withering Southern humidity. Whip up some chilled cream and await a drier day.

The Baker’s Basics: A Trusty Crust