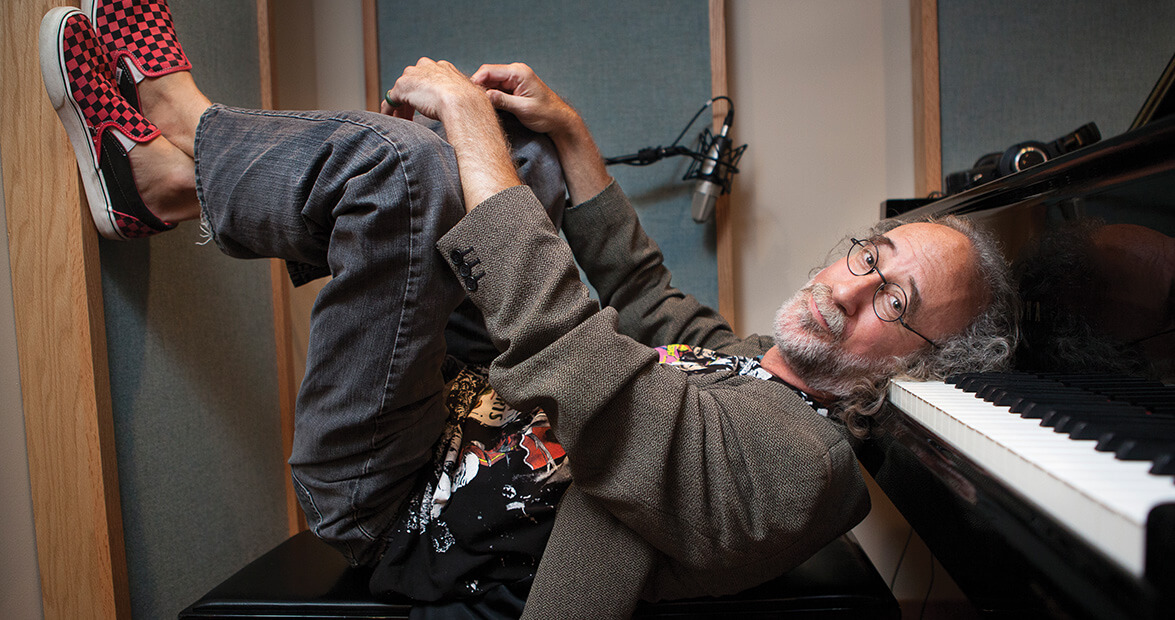 When BJ Leiderman sits down at the keyboard in his home in Swannanoa, he becomes equal parts musician and mad scientist. Tall and thin, he hunches over the keys, hair flying, feet pounding, body moving. He holds nothing back and you can practically see the music move through him, whether he’s playing a cover of The Beatles’ “Lady Madonna” or an original song of his own.

If you ever listen to National Public Radio (NPR), during the week or on the weekend, morning or evening, you know Leiderman’s music when you hear it.

Leiderman’s musical concoctions are an integral part of some of NPR’s most popular programs. They signal the start of NPR’s “Morning Edition” and the end of “Wait, Wait … Don’t Tell Me!”

Now, 35 years into an unconventional career that’s included composing those popular NPR theme songs, a stint in New York City writing award-winning jingles for brands like Coca-Cola and General Mills, and traveling cross-country with a band, Leiderman has landed in the North Carolina mountains from Virginia Beach, ready to work on what he calls “Chapter 2” of life.

For Leiderman, life has always been about music.

Before those theme songs, he was an only child in a musical family. As a kid, he was so enamored with The Beatles that he taught himself to play and sing their music the minute new releases came out. He played drums in the high school band, and dropped out of college to travel the country and play with two rock groups.

So, how did a guy who plays by ear end up writing the songs you recognize every time you tune in to NPR?

“My story is really one of being in the right place at the right time, and having a little bit of talent,” Leiderman says.

In the late 1970s, while he was still in college at American University, NPR was developing a new morning show. Leiderman had done some jingle writing on the side and his work made it into the hands of family friends who worked at NPR.

One day he got a call. The show’s producers were looking for music that could ease the audience from traditional, classical overnight programming into a more modern-feeling show.

“I sat down at this cheesy little keyboard called a Crumar Orchestrator and came up with the demo,” Leiderman says.

NPR picked up that song for “Morning Edition,” which first aired in late 1979, and the network continued to call every few years as new shows were added. Since then, Leiderman has composed themes for “Marketplace,” “Weekend Edition,” and public radio’s “The People’s Pharmacy,” among others. His most recent work, a new theme song for NPR’s “Science Friday,” debuted in July.

It’s his original, independent work that Leiderman is most interested in now.

He’ll continue to write theme songs, but he says there are things he wants to say through music of his own. He’s working on an album and plans to tour with it once it’s complete.

Of his long NPR connection, though, Leiderman says he is grateful.

Until his album is complete, you can find him playing live shows in the Asheville area and beyond. And he’ll remain where he’s been for the last 35 years — right at the bottom of your radio dial.