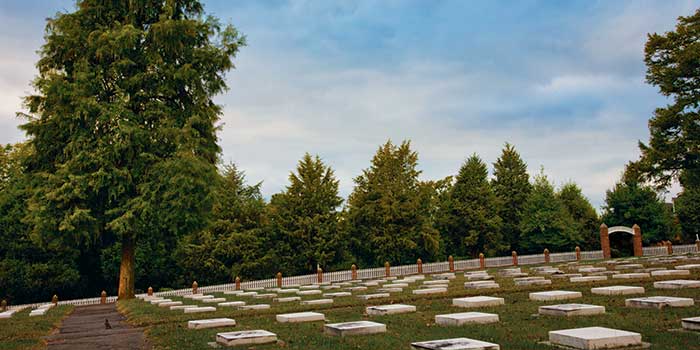 This is holy ground. It only takes a few minutes of walking this sacred swath of land — an impeccably precise, green-and-white checkerboard of grass and gravestones — to know you’re walking in a sanctuary of purity and peace. Surely, the Moravians who bury their dead here — or, for that matter, the ones who lie buried here — would tell you as much, but you don’t need to be Moravian to understand it. You just have to see what they see.

Ironically, Salem Moravian Graveyard — referred to as God’s Acre, as are all Moravian burial grounds — doesn’t look all that peaceful at first blush. The historic graveyard lies in the shadow of downtown Winston-Salem, where the business district strikes an imposing presence with its skyline of towering buildings and a beeline of traffic buzzing along Interstate 40 Business. On certain Saturdays in the fall you can even hear the rhythmic drumming of a college marching band warming up the Winston-Salem State University home football crowd at Bowman Gray Stadium.

Maybe this place was an idyllic, peaceful sanctuary in the Salem of 1771, when John Birkhead became the first Moravian settler laid to rest in God’s Acre. But how could anyone rest in peace here today?

And yet, they do.

The peace that envelops this place — that has enveloped this place for nearly two and a half centuries — reflects the attitudes of the Moravian faith itself: simplicity, consistency, humility. A quiet assurance that death, for all the finality, grief, and mourning it brings with it, is not the end.

Consider, for example, the gravestones of the more than 7,000 men, women, and children buried here. God’s Acre consists of row upon row of simple, flat markers of white marble — each one nearly square at 20 inches by 24 inches, standing four inches high, pointing east. Each stone bears only the name of the deceased, the dates of birth and death, and perhaps a short verse of scripture or a heartfelt tribute to the pilgrim buried beneath it.

The Lord Is My Shepherd.
A Most Precious Wife and Mother.
Blessed are the Pure in Heart, For They Shall See God.
Asleep In Jesus.
Loved By God and Man.
Weep Not, He Is At Rest.

The looming headstones, prominent crosses, and majestic statues that characterize most graveyards remain conspicuously absent from God’s Acre. In today’s look-at-me society, it takes a certain amount of humility to be eternally complacent with the idea of not building an eye-catching monument to oneself.

This synergy of humble saints and simple stones symbolizes what is often referred to by Moravians as “the democracy of death.”

“It’s the idea that we’re all the same in death,” explains the Rev. Richard L. Sides, pastor of Home Moravian Church. His place of worship is one of the 13 Winston-Salem Moravian churches that make up the Salem Congregation — they are the only churches whose members may be buried in this particular God’s Acre.

“In a Moravian graveyard, you won’t see one gravestone larger than another or elevated,” Sides says. “They’re all flat and recumbent. It’s not about status or wealth. It’s not about one person being more important in the eyes of God. We all are embraced by God fully in death.”

Highlighting the simplicity of God’s Acre even more is Salem Cemetery, another historic burial ground that stands adjacent to the Moravian graveyard. A number of well-known men lie buried here — including a former governor, legislators, and prominent businessmen — and some of their gravestones look positively gaudy compared to the unassuming Moravian markers. The pious Moravians would never say that themselves, of course, but looking at the more traditional cemetery from the midst of God’s Acre, it’s impossible not to notice the contrast.

What also sets God’s Acre apart from other cemeteries is the fact that the departed here are buried chronologically — in the order in which they die — rather than in a plot with their own family members. This tradition dates back to the Moravians’ centuries-old “choir system,” in which parishioners belonged to a particular spiritual community within the church. The congregation was divided into groups according to their age, sex, and marital status — children, married men, married women, widows, and so on — to better meet their spiritual needs. When they died, they were laid to rest with other members of their group.

“We were all seen as part of the one family of the church, so when it came time to be buried, you were buried with your choir rather than your family,” explains Daniel Crews, archivist of the Moravian Church’s Southern Province, whose office overlooks God’s Acre.

And so, walking these hallowed grounds, it’s now clear what sets them apart. It’s not so much the simple grave markers as it is the reason they’re so simple. It’s not so much about the dead being buried with their church family rather than their nuclear family — it’s more about the fact that they are at total peace with that. It’s not about tombstones that say “Rest in Peace” — it’s about a place where the dead really do rest in peace.

That’s what Sides, the pastor of Home Moravian, senses when he walks through God’s Acre, too.

“It’s a place of peace,” he says slowly, weighing his words. “I’ll see people after a funeral — complete strangers — walk around in God’s Acre, and they tell me how peaceful it is. I’ll see lots of people from downtown Winston-Salem walk through God’s Acre during their lunch hour, just walking and relaxing because it’s so peaceful.”

It’s also a place of hope, rather than finality, Sides adds.

“We don’t bury our dead in fearfulness or uncertainty — we bury our dead with hope and peace and assurance,” he says. “We know when we’re walking on that ground, we’re walking in what we call ‘the communion of the saints.’ These are our family members — our brothers and sisters in Christ — laid to rest with love and care, commended to God. And in that sense, this is a place of deep, deep faith.”

It is, after all, God’s Acre, and not theirs.

Jimmy Tomlin lives in Greensboro and is an award-winning writer for the High Point Enterprise. His most recent story for Our State was “Boogie Woogie Redux” (November 2013).