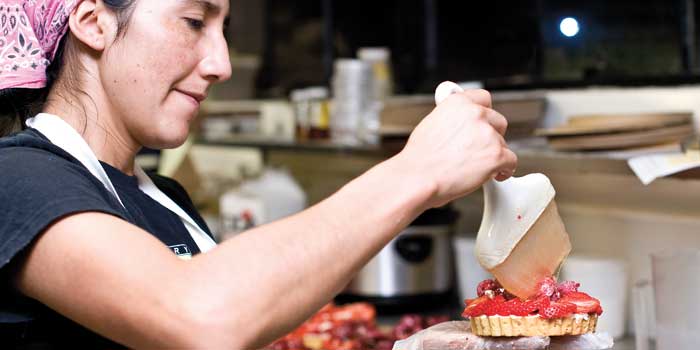 Along Chapel Hill Boulevard in Durham, past a bank, a used-car lot, and fast-food restaurants, a steel sign reads: Bakery. You get that. You can even see it at night. (It glows.) Then you see the other name: Guglhupf.

A mouthful to the Southern tongue, it’s the name of a popular cake from Germany and the name of a bakery and restaurant along a well-traveled commercial strip. It’s where two worlds meet.

The building is a piece of art, with exposed, steel beams; high ceilings; and a cascading waterfall feature beside the front steps that drowns out passing traffic from 50 yards away. On its expansive patio, where you hear languages and accents from way beyond North Carolina, you realize you’re in a different kind of place.

But the inside workings of the bakery are pieces of art, too. Much of the equipment came from Europe: large mixers, big ovens, antique baking molds, and a computerized bread-slicing machine with a blade shaped like a scimitar.

The artists — the bakers and pastry chefs — came from all over, too. Their shoes dusted white with flour, their hands caked with dough, they speak in a workaday language that deals with grams, meters, and Celsius. They work in a symphony of sounds.

The creak of rolling bread racks.

The whir of mixers.

The scrape-scrape-scrape of bakery trowels, and the slap-slap-slap of dough, thousands of pounds of dough, formed and rolled and made into something that just melts in your mouth.

Guglhupf’s bakers and pastry chefs see their days turn to nights and their nights turn to days through the bakery’s street-level windows. It’s Christmas time at Guglhupf, and everyone in the bakery works toward the making and selling of at least 16 German delicacies that are hard to find elsewhere in North Carolina. An eggnog mousse torte; apple and cherry strudel; and stollen, a loaf-shaped cake — a little larger than a football — whose first recipe dates to 1400.

None of these delicacies are grandma-sweet. The bakers make them from scratch — no boxes of cake mix used here — and the delicate taste and texture linger on your tongue. You might describe Guglhupf’s baking style as Old World or old-school.

But you really shouldn’t. Claudia Kemmet-Cooper, the 41-year-old German-born bakery owner, likes contemporary architecture, tapes cartoons on her office door, sees poetry in the sound of water, and hangs works by outsider artists nicknamed Cornbread on her restaurant walls.

She saw office work as a soul killer and chose the baking profession for its artistry and creativity. Plus, she loves the crackling sound of bread taken straight from the oven.

More than a decade ago, she and Harmut Jahn, her former partner, looked across the East Coast for a place to open a German bakery that married traditional, European baking techniques with contemporary style. They searched from New York to Savannah, Georgia. But not Florida. “It’s too hot, and this little German girl doesn’t do alligators,” Cooper says, laughing.

Since then, Jahn moved on, but Cooper stayed.

“I was scared out of my mind,” she says, remembering the early days of the business. “That’s a big leap of faith for one thing, to bring a whole new concept, not knowing how it would be received.”

She and Jahn chose the site of an old warehouse where an aluminum products company kept its storm windows. The building was, in Cooper’s words, hideous.

But she loved its big windows. It reminded her of the bakery where she worked in Germany.

While attending school at Hood College in Maryland and thinking about a career in international trade, Cooper joked with her adviser: “Well, if everything else fails, I’ll open a bakery,” she said. “They really need help here.”

After graduation, she returned to Germany and worked at a bakery in downtown Munich. She kept the job a secret for two years. Her grandparents thought she worked in a cubicle for a sportswear company. But Cooper left the company after only six weeks; she just couldn’t stand it. She chose to become a baker and thought her family would disapprove.

But they supported her. Her grandfather ran a construction company and understood the allure of craftsmanship. Her mom told Cooper that becoming a baker was the best decision she’d ever made.

“I was ready for her to say, ‘You’re out of your mind! What are you doing?’ ” Cooper says. “But to her, it made perfect sense. And really, in the end, mothers do know their children.”

Food for the soul

So with her family and her German-bakery experience backing her, Cooper made Guglhupf a success.

The warehouse was torn down to make way for a structure of steel and concrete walls. Cooper and Durham contractor Ted Patterson designed it, and the city of Durham recognized Guglhupf for its construction, honoring Cooper with the Golden Leaf Award for Best Commercial Construction in 2004.

Today, on any Saturday and Sunday morning, customers line up. They come for everything — but at this time of year the stollen is the star. They cluster behind the cash register beside a wall of best local bakery awards, including a certificate for “Best Bakery With A Scary Name.”

Longtime Durham residents, newcomers putting down roots, and students who call the city home for only a few years all come together at this community bakery with a strange name. It’s what Cooper always wanted: a place with a soul.

“You go to Italy and have a pizza in a piazza that’s 500 years old, and it has this atmosphere that heals your soul, and that’s what I wanted to do. It’s not just putting food in it. It’s the atmosphere you’re in, the whole sensory experience in a place that creates a product that’s visually beautiful. … There’s nothing more pleasing to me than pulling bread out of the oven and listening to the crackle. I know that sounds really strange. But does that make sense?”

What’s in a Stollen?

As early as 1400, German bakers used flour, yeast, oil, and water to create the Christmas pastry known as stollen. It wasn’t very tasty, and bakers wanted to use butter but couldn’t because the Catholic church forbade the use of butter and milk during Advent. Then Pope Innocent VIII sent what is now known as the butter letter and allowed bakers to use butter and milk — as long as they paid a reasonable tax.

That butter letter helped turn stollen into what it is today — a loaf-shaped cake accented with toasted almonds; citrus peel; and rum-soaked, golden raisins. Bakers then dip the loaf in butter and coat it with powdered sugar.

That’s how Guglhupf makes it today. Stollen keeps for up to nine months, so Guglhupf ships its stollen around the world.

Jeri Rowe, a Greensboro resident, is a staff columnist with the News & Record. Jeri’s most recent story for Our State was “A Community Moved by Steam” (November 2011).