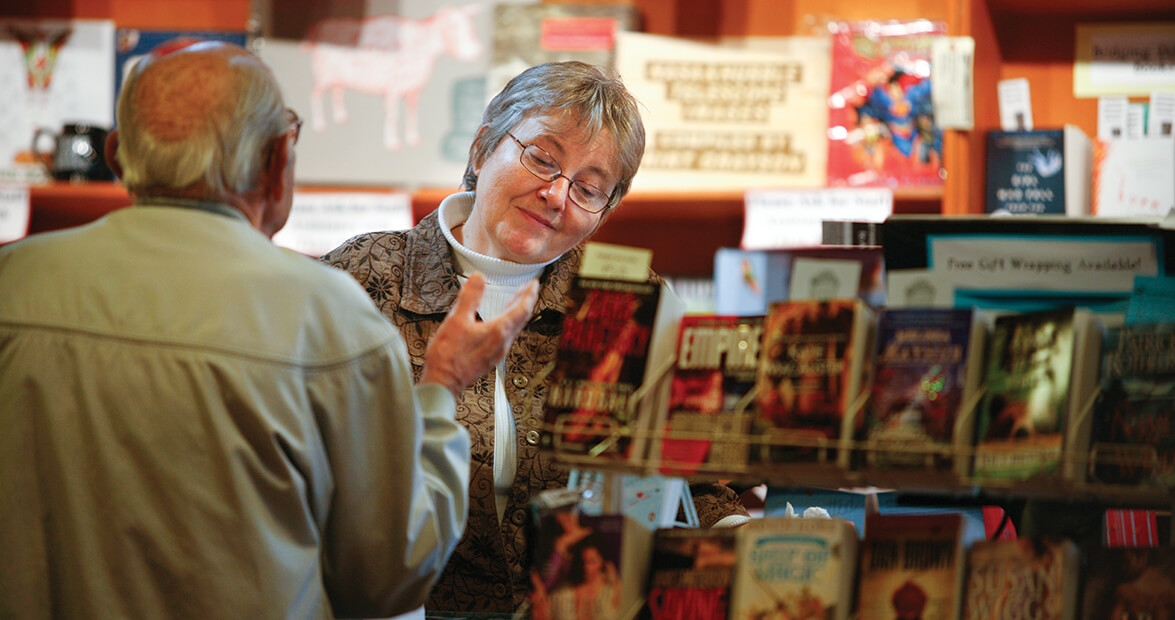 “That’s the kind of society it was,” B’Racz says of Hungary in 1950. “Poets and writers disappeared.” Among them was her father, who, despite his precautions to burn his work, was dragged away that “midnight in wintertime.”

Now 62, B’Racz sits in the cafe of Malaprop’s Bookstore, which she opened in downtown Asheville in 1982. She speaks in a low, slightly accented voice, recounting family evenings filled with poetry recitations and folk music. “Words were tended to me with love,” B’Racz says. “Bookselling is about the importance of the word.”

Dressed in slacks and a blouse, with short, graying hair feathering her full face, B’Racz could be mistaken for a soft, grandmother type. But the eyes behind her metal-frame glasses are keen, her glances sharp, and her words to the point. It’s easy to understand, while browsing Malaprop’s eclectic mix of titles — from the best sellers to the overlooked to the once-banned — that B’Racz has spent the past 29 years reclaiming those books stolen from her family so long ago.

In the process, she created a literary hub for western North Carolina — a bookstore, she says, that’s about creativity and community.

B’Racz fell in love with Asheville and the mountains as soon as she moved here from New Haven, Connecticut, in 1980. She opened Malaprop’s — derived from “malapropism,” meaning ludicrous misuse of a word — without business loans. She depended, instead, on common sense and honesty.

But the economic reality for downtown Asheville in the 1980s was bleak, with boarded-up storefronts and no foot traffic. Cheap rent provided funds to invest in more inventory and good staff, B’Racz says. But opening the business wasn’t simple; it demanded an eye with long-term vision.

“Emöke created this intimate space where she had relationships with everyone,” says Leslie Anderson, director of downtown development from 1986 to 1993. Anderson isn’t surprised that the bookstore paved the way for more retailers to locate downtown.

“Books are such natural conversation starters, and Malaprop’s had this great cosmopolitan vibe.” In 2000, Malaprop’s received the Seal of the City Recognition for Outstanding Contributions to the City of Asheville, the same year Publishers Weekly named it Bookseller of the Year.

Employee Gina Cole remembers feeling that vibe as a child when she visited the store with her family to browse the extensive young-reader selection. Two decades later, in 2009, Cole held her wedding at Malaprop’s. “We both loved the idea of being surrounded by books, with thousands of years of ideas and stories and love and adventures,” Cole says.

Linda Barrett Knopp, Malaprop’s general manager, remembers a customer named George, who came in the store every day. “When he died, his family wanted to do the memorial here, and we closed early to do it,” Knopp says.

She realizes Malaprop’s might provide the only nice moment of the day for its customers. And those customers show their appreciation — some of them front-load personal book-buying accounts with thousands of dollars. When Malaprop’s relocated to its present location, just a few doors down from the original, a loyal customer brigade moved the books, box by box, down the street.

Today, Malaprop’s customers, both locals and tourists, peruse titles in a space where the lighting is warm but not dim and the signage is hand-lettered. Authors smile down from colorful event posters lining the walls. And not just best-selling authors, although the store invites many. Malaprop’s embraces emerging local and regional talents. “There are books — and writers — I need to be there for,” B’Racz says.

Through the years, people encouraged B’Racz to sell the store name or open in other locations, but she always declined. “I don’t want to have an empire,” she says. Nor does she want to live anywhere besides Asheville, the community that supported her dream. Someday, B’Racz plans to pen the story of her father, who reunited with his family in the United States in 1964.

“I’ve done a good job,” she says. “Now, I am just enjoying getting you the book you want.”

From Hungarian Childhood by Emöke B’RaczThe knocking came at midnight in wintertime.
The room was warm and at peace with the night.
Two men brought in the cold under their hats,
grabbed most of the books and threw them into potato sacks

My father was still and silent
Like a falling leaf in the eye of the storm.
The silence was broken by my mother sobbing
As they dragged him through the door.