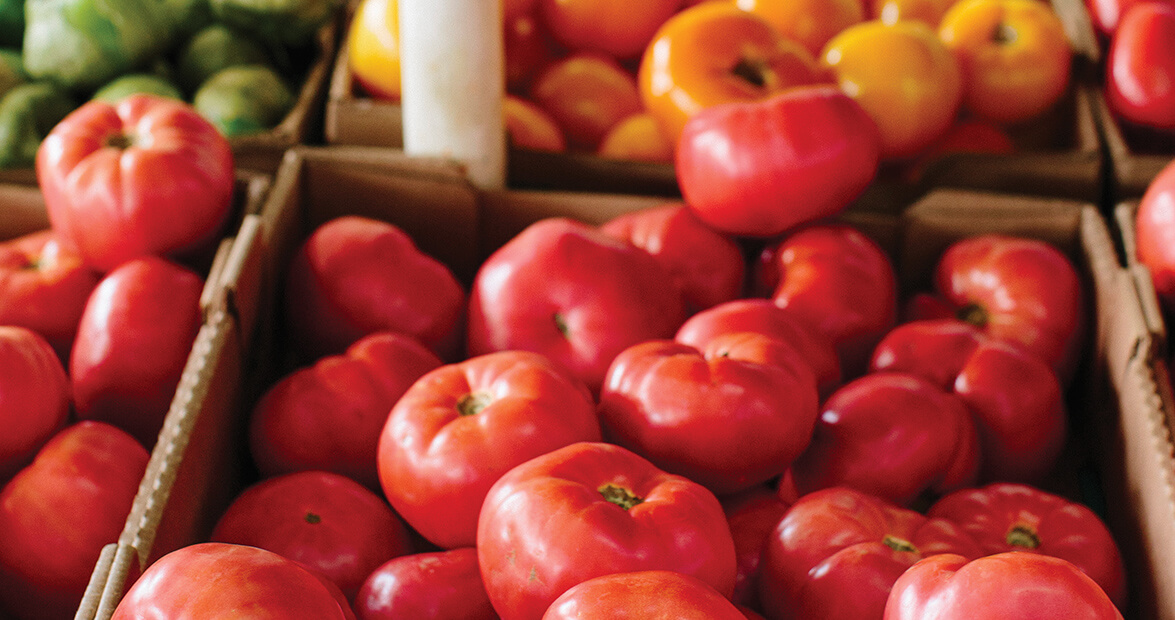 As summer pads into its dog days, the Holden Brothers Farm Market, just outside Shallotte in Brunswick County, prepares for its annual burgeoning of fat, ripe tomatoes. Rows of emerald vines on 250 acres of the family farm offer the juiciest varieties to round out the summer: Brilliant red Phoenix bulge on delicate stems; succulent Volantes hang plump and ready for the plucking.

The Holden brothers welcome hundreds of people a day — tourists, locals, vacation travelers — who drive from as far north as Maryland and as far west as Tennessee. They come to gently squeeze the fruit’s flesh while it’s still warm from the sun; to smell the vines’ distinct, earthy scent; to pick only the best tomatoes, only the ones they want.

“If the fields have been closed for a few days, people are lined up at the gates when we open,” says Kelly Holden, who’s been responsible for the farm’s crop production since it switched from tobacco to vegetables in 1984. “They’ll even plan their vacations around it.”

Eyes bigger than your muscles

A typical day during the farm’s pick-your-own tomatoes season — usually starting around the first of September and running through October — sees sales of about 10,000 pounds of fruit. “Pick-your-own tomatoes is a huge draw for us, even more than pick-your-own strawberries in the spring,” says David Holden, Kelly’s brother, who runs the retail end of the business. “People who love tomatoes are fanatical about it.”
The Holden Brothers’ website advises pickers to be in “good physical condition” to load up their baskets. These are no wispy strawberries or pebble-size blueberries: A bushel of this dense fruit can get heavy — 50 to 60 pounds, if you fill up a basket, says Kelly. “And they’re going to pile ’em up,” he adds. “People get carried away when they get out there and see how pretty they are.”

Kelly encourages pickers to bring their own containers — “a bucket or a peach basket works best,” he says — but the farm furnishes boxes for impromptu visitors. And if the load gets too heavy? Happens all the time. “They can just leave their containers right there in the fields, and we’ll come pick them up,” says Kelly.

Veteran pickers hitch a ride to the tomato fields on tractor-pulled carts — “people-haulers,” the brothers call them. For these old-timers, tomato selection is an art. “Most people want the largest ones, down at the bottom of the bush. Some people want them pink, when they’re just breaking. Some want all green,” Kelly says. Because of Kelly’s keen variety selection, folks can pick right through October. “If you get the tail end of the season, the tomatoes are going to be smaller,” he says. “But they’re just as good.”

Reason to stick around

Years ago, the Holden Brothers offered visitors a chance to pick their own tomatoes in the normal summer harvest period. “But, as it turns out, nobody really wants to pick tomatoes on a 90-degree day,” Kelly says.
So the brothers experimented with fall varieties, and each year pickers can expect to find new breeds tucked in with their Phoenix and Volantes staples.

This summer marks the 258th year the Holden family has nurtured their farm. Kelly helped the land shift from sprouting North Carolina’s traditional tobacco crop to fruit and vegetables. He can’t think of a better fate for the farm than giving others the chance to experience the richness of agriculture. “People stop at our stand to buy vegetables, but they’ll spend a couple of hours or even a day here in the fields,” he says. “I think people are just happier — more satisfied in general — when they’re out on a farm.”