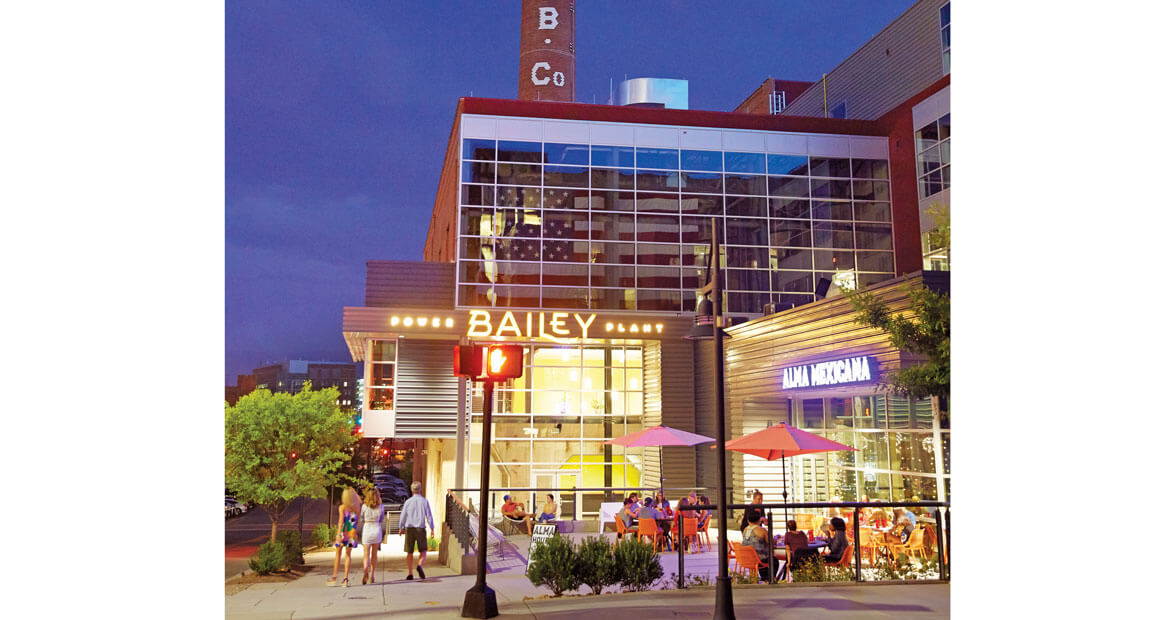 Just as the sun dips behind Winston-Salem’s skinny R.J. Reynolds smokestack, a blanket of shade revives the 100 or so yogis moving into warrior pose on the grassy lawn of Bailey Park. Their Sunset Salutations class — a free yoga practice held every third Wednesday of each month — has been going strong for 10 minutes, but latecomers are still arriving on the scene and rolling out their mats.

“I’ve never seen a yoga class this big,” one woman tells her friend as they stroll along a sidewalk that wraps around the park. The women pause long enough to pet a Labradoodle waiting eagerly by a sleek new bench.

Where 75 years ago men and women lined up to make cigarettes in world-class tobacco factories, today young oak and cherry trees rustle in the breeze. Colorful bistro tables and chairs cluster among beds of hydrangeas, roses, and black-eyed Susans. And newly renovated historic buildings frame the skyline on all sides.

“We were inspired by Bryant Park in Manhattan,” says Graydon Pleasants, a leader in the revitalization of Winston-Salem’s Wake Forest Innovation Quarter. “In the ’90s, Bryant Park was this moribund, deserted place. But if you go there today, there are thousands of people having lunch and an array of activities: music, books, concerts, movies.”

The whole idea, Pleasants says, was to create a sustainable environment where people weren’t just coming to and from an office, but instead were hanging around to exercise, to have dinner, to walk home — “the mixed-use concept, where people live and work and play.” 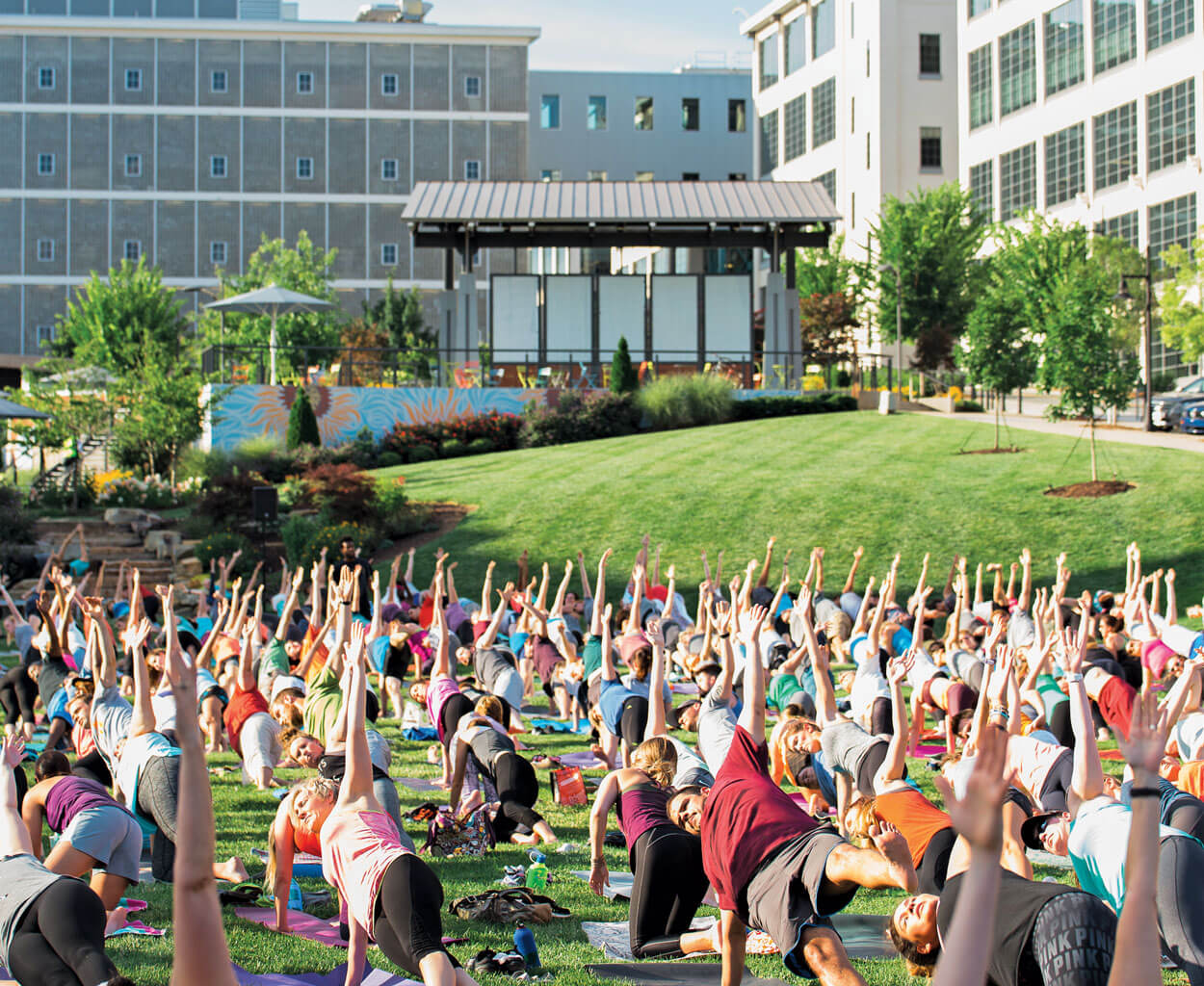 Winston-Salem has come a long way from the days when tobacco fueled its economy. The 330-acre Innovation Quarter promotes a modern entrepreneurial spirit, from yoga in the park to restaurants like Alma Mexicana, one of the more than 170 businesses in the area. photograph by Wake Forest Innovation Quarter

It’s not such a new idea, Harold G. Brandon says with a laugh. He moved from his home in Davidson to Winston-Salem for barber school in 1956. These days, Brandon works at Liberty Street’s Purr-fect Cut, but back in the ’60s, he had a chair at Delight Barbershop on the corner of Fourth Street and Patterson Avenue — the epicenter of today’s Innovation Quarter. From there, Brandon watched the factory workers come and go from their shifts, meet friends for lunch at one of the half-dozen cafés lining Patterson, drop in for a haircut, and then head to the YMCA down the street or a movie.

“If somebody who worked there then was dropped in today and looked around, they would be lost. Except for the railroad tracks and the smokestack, nothing looks the same,” Brandon says. But in some ways — especially when you think about how the area is used — he adds, “it was just like it is now.”

In the old days, many factory workers lived a few blocks away in Reynoldstown, a neighborhood originally created for tobacco company employees. “Reynolds was paying good money,” Brandon says. “Most people lived in the homes and apartments back behind the factories. If either the husband or wife was working and they had a kid in high school, that kid could work in the summers. And then, when they graduated from high school, they would get their first full-time job at Reynolds, too.” 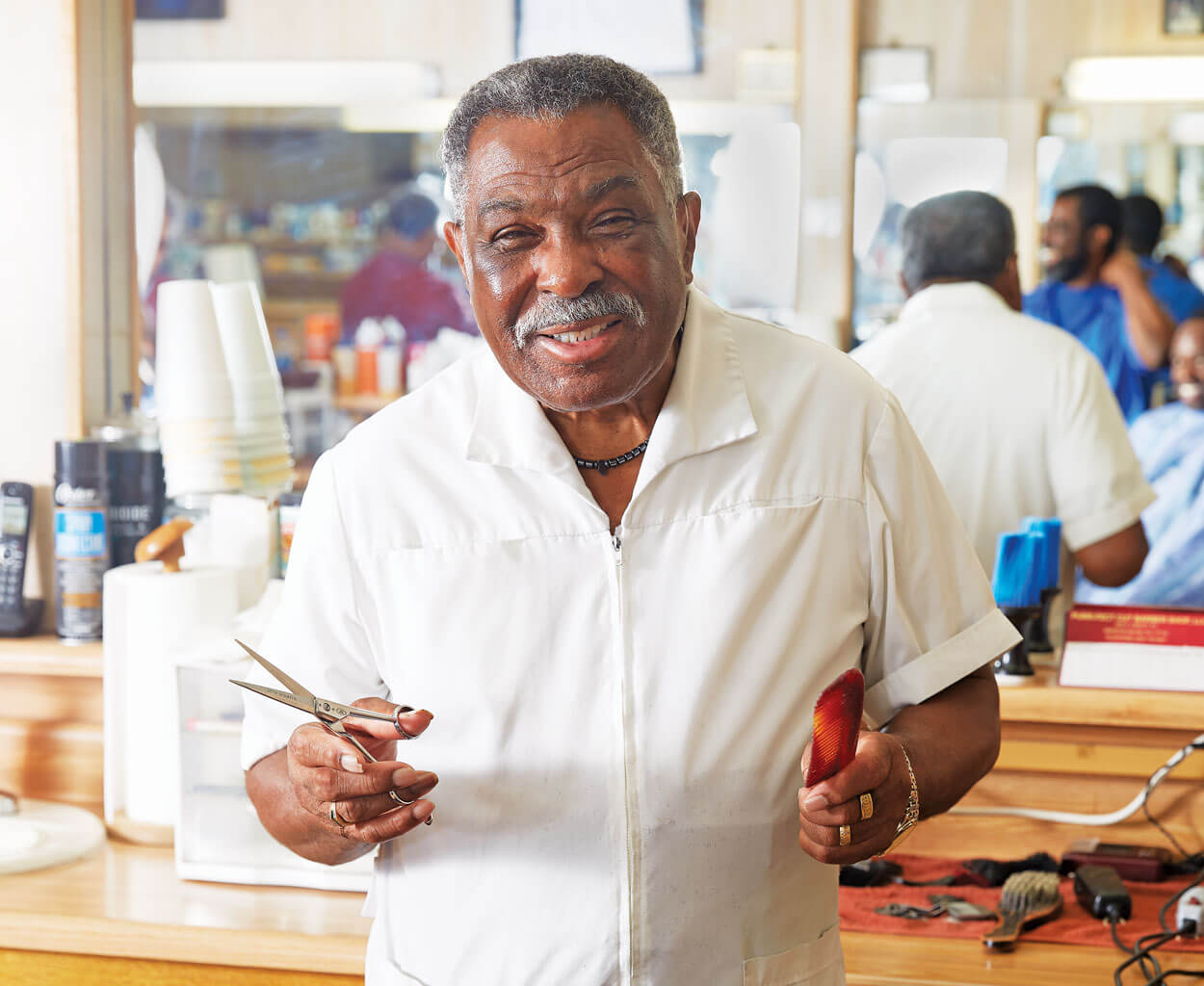 Harold G. Brandon has been cutting hair at barbershops in the area since the 1960s. photograph by Stacey Van Berkel

That way of life is unthinkable today. As early as the ’50s, the construction of U.S. Highway 52 divided and then gradually destroyed the fabric of the surrounding black neighborhoods. By 1986, when R.J. Reynolds moved its newest tobacco factories 20 minutes north to Tobaccoville, most of the last remaining tobacco jobs dried up. What remained was a bleak support structure — metal steam pipes, crisscrossing powerlines — once supplemental for burning coal at Reynolds’s Bailey Power Plant.

That was the scene that Pleasants encountered when, in 2005, he first donned his hard hat for a walk through the five-story, 1930s-era building that’s now Wake Forest Biotech Place. “The whole area was pretty utilitarian, but those multistory industry buildings captured everyone’s imagination,” he says. “At that time, Biotech Place was a warehouse and machine shop. Reynolds repaired and rebuilt machinery there, so there were big cranes inside the building.”

In those old tobacco buildings, Pleasants and a few other visionaries saw possibility. “We had this idea of reinventing the economy of Winston-Salem based on the research generated by Wake Forest Health Sciences,” he says. 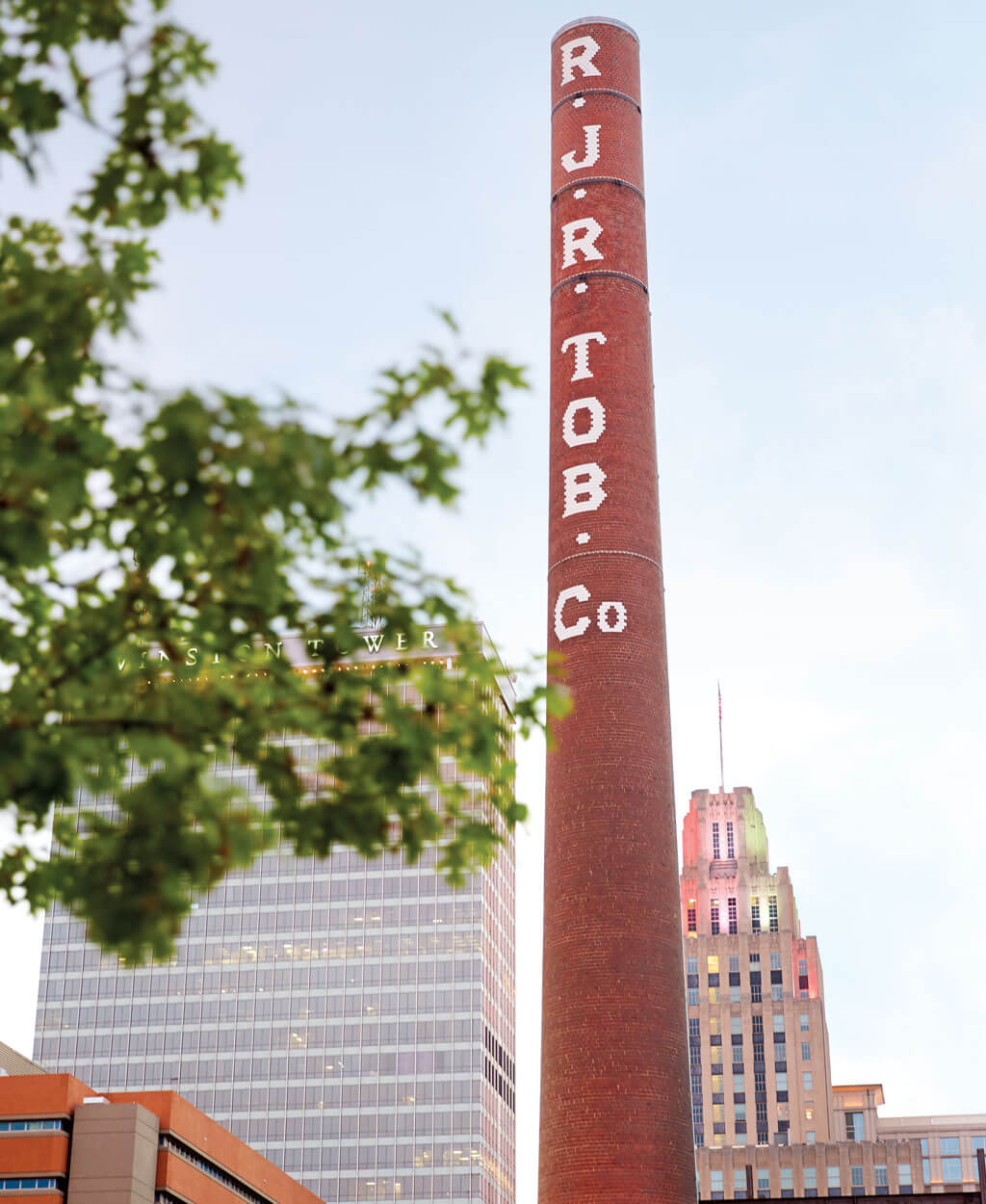 The iconic, 130-foot-tall R.J. Reynolds smokestack — built in 1949 — watches over what is now Innovation Quarter. photograph by Stacey Van Berkel

When Biotech Place opened in 2012, it became home to a number of top health science research departments — and the irony was not lost on Pleasants. “If you look back to Winston in those early tobacco days, you’ll see that it grew alongside a lot of entrepreneurial businesses, like Hanes Hosiery, Piedmont Airlines, Wachovia Bank. These businesses all grew as tobacco grew.”

Like the yogis, who are now rolling up their mats and discussing dinner plans, Innovation Quarter is now vibrant and teeming with possibility.

“Nighttime is magical here,” Pleasants says. “When the buildings are lit and people are coming and going, it gives you a flavor of this living, breathing, ongoing, ever-changing environment.”