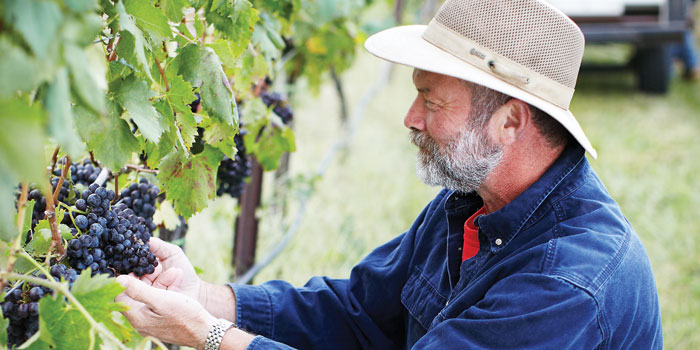 Editor’s Note: This story was originally published in January 2012.

Breathing. It’s the most important thing we do for our bodies — taking in oxygen and letting out carbon dioxide. We don’t think about it. We can’t see it. But it’s a beautiful thing. We take 15 breaths every minute, 900 breaths every hour, 21,600 breaths every day. At the end of a long day, after getting out of bed, shaking off yesterday, going to work, exercising at the gym, cooking supper, talking to your spouse, watching television, and preparing for tomorrow, you might not realize you’ve even breathed at all until your head hits the pillow.

But at Raffaldini Vineyards in Ronda, you can’t help but pause — and take in one extra-deep breath. That long inhale and slow exhale break you away from your day to day and transport you to one of the most spiritual, romantic places in the state.

This place didn’t happen by accident. Raffaldini Vineyards is a product of research, testing, and experimentation. When Jay Raffaldini decided to plant his own vineyard, he looked at 60 different sites. An Italian-American, Raffaldini knew he wanted to make bold, dramatic red wines. Raffaldini grew up in New Jersey, just across the river from Manhattan. His father, Jerome, came from Italy to New York after World War II and went on to lead production on NASA’s lunar-landing mission in 1969. And his mother, Theresa, was a professional dancer who often performed at Radio City Music Hall.

When a Raffaldini sets his mind to something, he intends to make it happen in a big way.

But the cold climate of the Northeast region produces softer, white wines, which don’t suit Jay Raffaldini’s personality or palate. So his search led him south.

He heard about a place in the middle of nowhere in North Carolina. A place where the soil is rocky, the land is hilly, and the climate is warm. It was 2001, and only 10 wineries existed in the state. But Raffaldini knew that before Prohibition, North Carolina led the nation in wine making.

“Anywhere grapes grow naturally somewhere, it tells you that they belong there,” Raffaldini says.

He conducted soil tests and learned that the rocks and minerals that glitter in the dirt are schist and mica that allow for excellent drainage. He tracked the weather patterns and discovered that the climate parallels with that of his parents’ Italian homeland. If you begin in Ronda and draw a line eastward around the world, it crosses right below the toe of the Italian boot. Ronda lies at 36 degrees latitude; Sicily sits at 37 degrees.

So Raffaldini had his spot, a beautiful, Italian countryside in the middle of the American South. But how does a Wall Street businessman, who logs 250,000 travel miles a year and lives in a city where you can’t see the soil for the layers of concrete, learn how to grow Italian grapes in a region known for corn and tobacco?

He just took a deep breath and dove in.

Andy Shores parks his truck at the top of the hill that overlooks the 43 acres of grapes at Raffaldini Vineyards. It’s almost 6 a.m., and he waits for the sun to rise over the Little Brushy Mountains in the east. He can’t work in the dark.

It’s his favorite time of day. The air is still; the near constant breeze that blows here hasn’t kicked up yet. It’s quiet, too. A scarce pair of headlights on Cedar Forest Road, barely visible from up here, is the only interruption.

But the silence won’t last long. As soon as the sun’s rays shed enough light on the vineyard, Shores cranks up the John Deere tractor and steers it through the nine feet of space between the rows. It’s harvest season, and 75 tons of grapes hang heavy on the vines.

Jay Raffaldini hired Shores in 2004 to sit on the tractor and steer. Shores didn’t know anything about the wine business. He grew up on a corn and tobacco farm in Union Hill, about 18 miles away. But Shores asks a lot of questions and learns quickly. So Raffaldini sent him to Surry Community College where he studied viticulture. Shores returned with new knowledge and a new title — vineyard manager.

His wardrobe hasn’t changed: a wide-brimmed hat, thick Carhartt jeans, and a Leatherman on his belt. This morning, he and his team will harvest five tons of grapes.

He walks between the rows and picks a cluster of Vermentino grapes — golden globes with brown freckles. They smell sweet and earthy, and taste better than any supermarket grape ever could. Shores splits one open, and the brown seeds inside indicate that it’s ripe and ready to be picked. He’ll get to this row next week. They harvest everything by hand here, so it takes longer, from early August until mid-October. Some vineyards use a mechanical harvester, but that’s unnatural. It breaks some of the vines and misses some of the grapes.

Shores points out the lack of space between the vines, only three feet. This farming mentality contradicts the one Shores grew up practicing. When a farmer plants a field of corn, he wants the highest yield possible. But in the vineyard, less is more. If the vines are too far apart, they produce too many grapes. When the vines are close together, they compete for resources, which means they only produce a few grapes. Fewer grapes, better quality.

The planting process for grapes is also new for Shores. You don’t plant grape vines using seeds, like you do with corn; you must graft the vines.

At Raffaldini Vineyards, they grow Italian grapes, like Sangiovese, Montepulciano, and Vermentino. It took Shores a while to wrap his mouth around those Italian words and adjust his palate to a drier wine.

The vines you see and the grapes you taste are Italian, but the roots growing under the ground are American. You can’t see them, but they’re there. These native rootstocks are resistant to grubs, and without them, the European grapes couldn’t grow here.

It’s that combination of native root and foreign graft that makes Raffaldini work.

At 10:30 a.m., Shores and his crew stop picking. It’s too hot to work any longer. The heat from the sun causes the grapes to ferment in the bins. The workers catch their breath — and haul the morning’s harvest up to the winery.

After Shores delivers the load, he spends the rest of his day walking the vineyard. He checks for signs of disease, tucks wayward vines back into their wire restraints, turns the clusters toward the sun, and eats his fill of grapes.

“If you take care of ’em, they’ll just keep going,” he says. “I go in there in the wintertime and sit down with a glass and say, ‘Look at what I did.’ ”

In the winery, Kiley Evans bends over a dry-erase map with a pencil behind his ear. As the grapes come in, he tracks the contents of every bin. His map shows which varieties grow where in the vineyard. With eight different varieties, you would think he has eight different types of grapes to deal with. But even grapes of the same variety taste different depending on their location in the vineyard, the year they were planted, and when they were harvested.

Before he took the job as winemaker at Raffaldini Vineyards last July, he conducted his own research. From his home in Oregon, he talked to Jay Raffaldini on the phone for an hour. Technically, Raffaldini was interviewing Evans, but Evans asked just as many questions.

“I realized that they’re doing things the right way,” Evans says. “You’d think that the land is the most important thing, but to most people, it’s not. This was a place with tremendous potential; the homework had been done.”

But Evans wants to know why grapes in one block on his map taste different than grapes in another block. Why are these sweeter? Why are these juicier? Something in the soil is responsible, something he can’t see.

After he documents the grapes, a forklift dumps the bin into a sorter, and gravity moves the fruit. Some wineries use a pump, but that’s unnatural. It tears the skins and breaks the seeds, causing tannins to leak into the juice.

The grapes sit in big, metal tanks to ferment — producing alcohol, heat, and carbon dioxide. Twice a day, Evans and his crew open the tops of the tanks and push the grapes down into the liquid. After every task — after a bin dumps, after a lid opens, after a taste-test — someone sprays the area down with a water hose.

“The thing I worry about the most is what I can’t see,” Evans says. The sugar in the grape juice attracts yeast, bacteria, and fruit flies, so the crew allows no juice to dry on an open surface.

As the juice transitions to wine in the tanks, Evans checks it. He tastes the wine every day. He turns the stopper on one tank like a faucet and a cloudy, bubbly liquid runs out. The young wine is 26 percent sugar and smells like a box of raisins. As time passes and the fermentation process continues, the wine loses its percentage of sugar and gains a higher percentage of alcohol.

At each stage, Evans draws a taste and swirls it in his glass. He holds it up to his nose and inhales. His well-trained palate picks up aromatic hints of banana, pear, and guava. He slurps and swishes the liquid. It’s not a rude gesture, but a scientific one.

With each swirl and swish, Evans aerates the wine — he lets it breathe. It’s one of the most important steps when tasting wine. As the wine breathes, the more volatile, undesirable compounds evaporate out, leaving behind the aromatic, flavorful ones.

We can’t see the fermentation or evaporation steps of the wine-making process, but they produce a beautiful product.

Jay Raffaldini sits on the patio of his Tuscan-style villa at the top of the hill that overlooks his Italian vineyard in Ronda, North Carolina. It’s late in the afternoon, and he waits for the sun to set over the Blue Ridge Mountains in the west. His work for today is done.

As the sun descends, its rays turn purple, pink, and orange. They shine on the 800 rose bushes that decorate his property. They highlight the contrast of deep purple grapes hanging beside bright green leaves. One car on Cedar Forest Road turns on its headlights, and it’s the only interruption.

“If I could be here all the time, I would,” he says. “This is my favorite place in the world.”

And that comes from a man who just caught the red-eye in from Los Angeles, California; who travels to Italy every six weeks; who works on Wall Street in Manhattan; who will fly to Australia next week; and whose head hits the pillow in some hotel more often than it does in his own bed.

But here, he can breathe.

He swirls his glass, sips his wine, and exhales.

Leah Hughes is a former associate editor of Our State magazine. Find more of her archived stories here.