When I stare into a fireplace, I’m powerfully moved to say something profound. The gentle rhapsody of the flames — the flickering orange glow, the crackling wood, the rising sparks — seems to provide the perfect backdrop for a statement that expresses a central truth about the human condition. Perhaps I could say, “Every book is a quotation.” As my companions look up in approval, I could go on: “Every house is a quotation out of all forests, and mines, and stone quarries.” Nodding my head sagaciously, I could continue: “And every man is a quotation from all his ancestors.”

Ralph Waldo Emerson said that first, but it remains as profound as anything, and it’s one of the world’s great fireplace quotations. Which is probably why it’s printed on one of the world’s great fireplaces. I’m talking about the enormous fireplaces inside the vast Great Hall at the Omni Grove Park Inn in Asheville. It’s here that I’ve found the soothing crackle and hiss that I’ve been searching for my whole life. 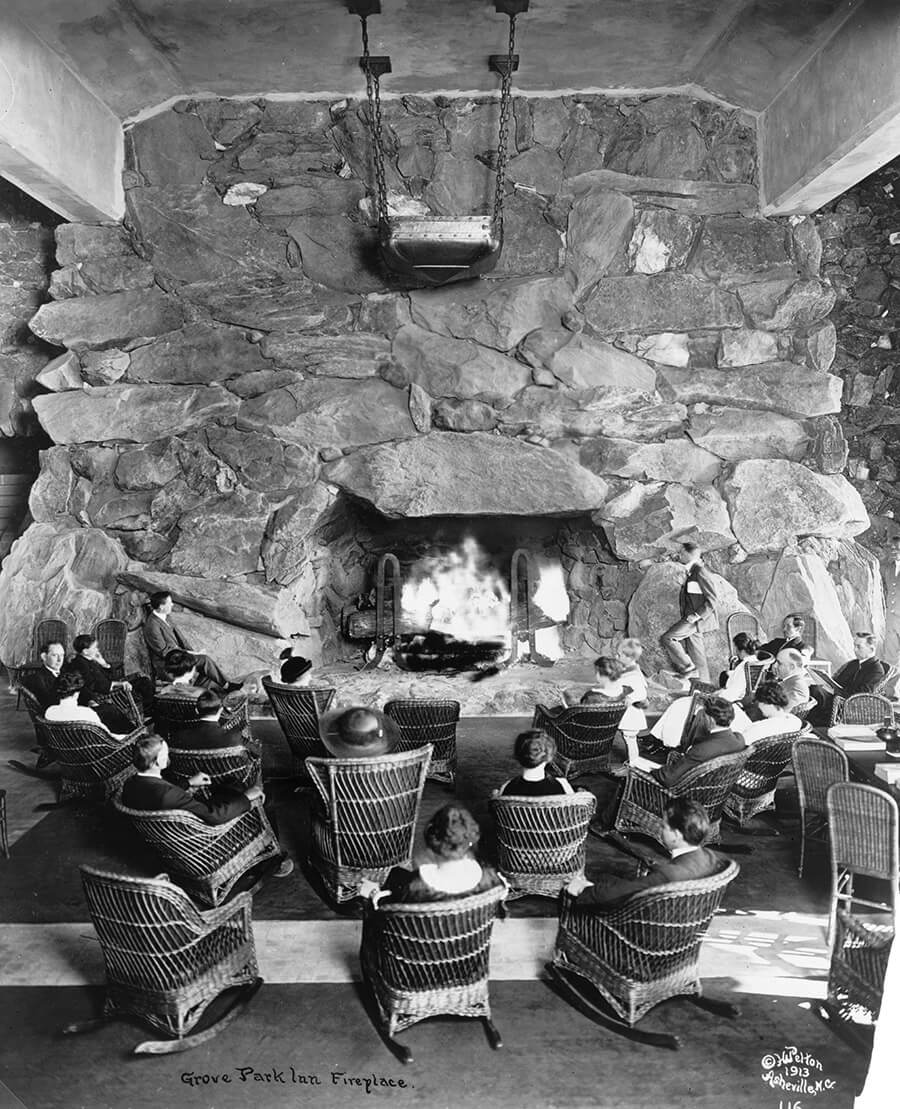 Guests first gathered in silence around the Grove Park Inn’s enormous fireplaces in 1913. Photography courtesy of THE LIBRARY OF CONGRESS, LC-USZ62-105973

The inn’s two fireplaces are gigantic: 36 feet wide — 12 long strides from end to end — and built entirely of granite stones wrested from the living rock of the surrounding mountains. Their openings, only 12 feet wide and 6 feet tall, are comparatively small, but what really dwarfs them are the boulders from which the surrounds are built. Together, the two structures comprise about 120 tons of granite. A single boulder — said to weigh upward of 5,000 pounds — serves as a mantel above each grate. Even the andirons weigh 500 pounds each.

But measurements cannot really express the magnificence of these things. They squat at either end of the Great Hall, the inn’s main lobby, like great jungle animals staring one another down. Wooden rockers line the flagstone hearths, and you can sit, and rock, and swirl bourbon from the lobby bar; you can feel as profound as you care to as you read the nuggets of wisdom etched into the sides of many of the boulders: “Be not simply good — be good for something,” from Henry David Thoreau, or “The sun will shine after every storm,” again attributed to Emerson.

I’m spending the evening just sitting by these fireplaces. I came down to the lobby with a journal, books, a smartphone — all of the entertainments with which we arm ourselves against our lack of profundity. But I never crack book nor turn on phone. Instead, I ponder — silently — those quotations on the rocks. “How much pain have cost us the evils which have never happened!” Thomas Jefferson reflects. Or, according to a Dutch proverb, “The gem cannot be polished without friction, nor man perfected without trials.”

The quotes were chosen by Fred Seely, a pharmacist. Let me back up and explain: When the Grove Park Inn opened in 1913, the brainchild of Tennessee pharmacist Edwin Wiley Grove, Southerners were beset with malaria. Quinine fought the disease but tasted awful. Grove mixed quinine with lemon flavoring, sugar, and iron, and by the late 1890s, Grove’s Tasteless Chill Tonic was earning him a million dollars a year, outselling even another new Southern beverage, Coca-Cola.

Grove would visit Asheville, and then, when his health began to suffer, made a summer home there. He soon joined up with fellow pharmacist Seely, who’d married Grove’s daughter. After the nearby Biltmore House was completed in 1895, Grove began buying mountaintop property for development, eventually deciding to build what he hoped would be a fine inn. Seely suggested something similar to Yellowstone National Park’s Old Faithful Inn, though made of rock rather than wood.

Now regarded as one of the great inns of the world, Grove Park is a massive pile of stone built by many of the same imported workers who had worked on Vanderbilt’s little cottage down the road.

From the start, Grove wanted his inn to offer a retreat from the hurly-burly of life in the rapidly mechanizing 20th century. Everything about the inn was designed for rest. The enormous Great Hall has a 24-foot ceiling supported by gigantic columns. Now clad in glowing wood, the columns were at first made of stone, and the inn’s water pipes ran inside them — to preserve the quiet. 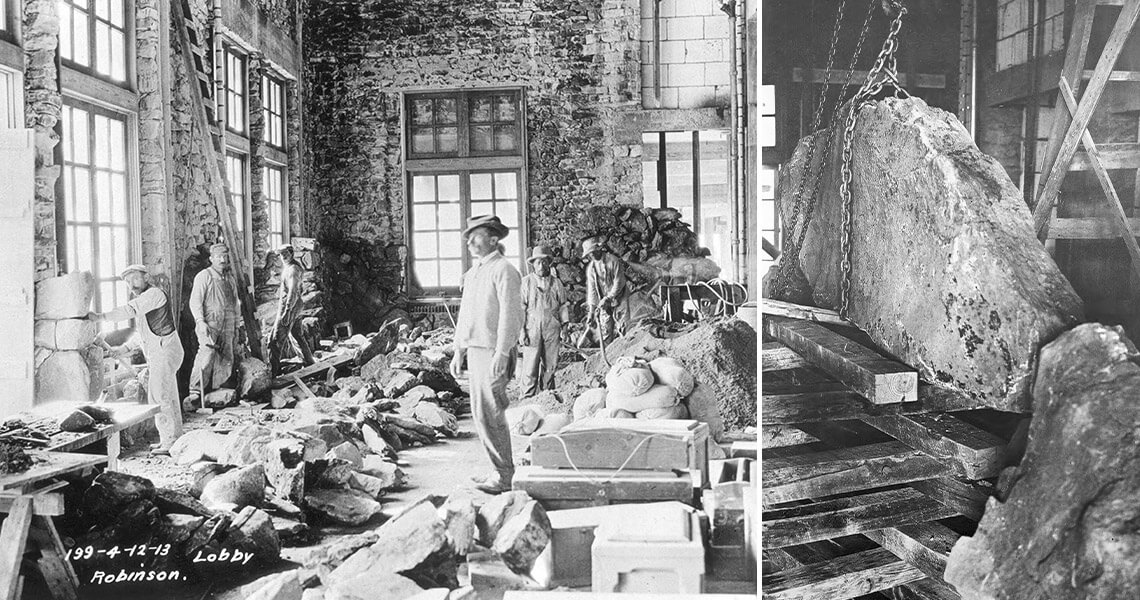 Stonemasons, some of whom also worked on the Biltmore House, used chains and pulleys to move boulders into the Great Hall in 1913. Photography courtesy of GROVE PARK INN COLLECTION, D. H. RAMSEY LIBRARY, SPECIAL COLLECTIONS, UNIVERSITY OF NORTH CAROLINA AT ASHEVILLE 28804

Guests were expected to be silent after 10 p.m. They were even asked to quietly remove their shoes and avoid running water. The elevators, their mechanisms built into those vast stone fireplaces — again, for silence — have window shades that once reminded guests to be quiet. And if those who gathered in the Great Hall became too noisy, hotel staff would glide up and silently present a card: “Please be more subdued.”

During my visit, the guests are not subdued. Even as midnight nears, jokes elicit hearty laughs and squeals of tipsy glee that echo around the Great Hall. I don’t mind. I’m here for the fireplaces, and all of these other people are part of the experience.

And those fireplaces. At the south end of the room, where I sit in a low, comfortable Arts and Crafts-style armchair, it is hot. I mean hot-hot. Several four-foot logs gently crackle atop a heap of ashes that stands a good two feet tall. The orange glow from within looks hot enough to melt Frodo’s ring. My chair is separated from the flames by a hearth, a row of rockers, a flagstone walkway, and a 36-inch table — and it’s still warm enough that I have to remove my sweater.

I sit peacefully, gazing at the fire from a safe distance, in the dim light emanating from the square chandeliers. And if you think the lights are dim now, shining through translucent panels, imagine the early days of the inn, when, to encourage peace and quiet, the chandeliers had opaque bottoms. The stone floor and walls make the room feel like the mountain house of my dreams, and I watch a changing cast of characters line up at the fireplace, stand for only a moment, take a photo, and then move on to escape the heat. 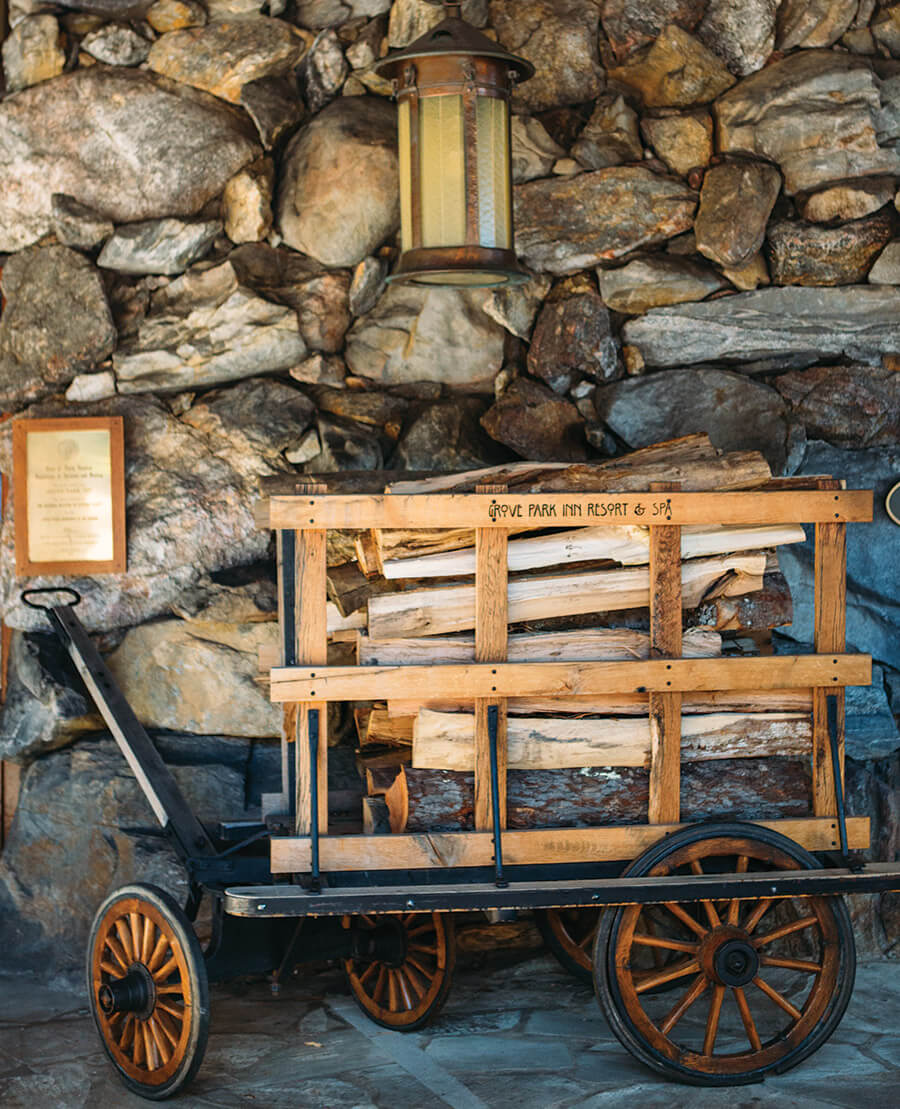 Guests are asked not to remove the logs from carts next to the fireplaces, but that doesn’t stop them. photograph by Tim Robison

People take pictures of the fireplaces all day long, my waitress tells me. And they’ll complain if logs aren’t burning — though, even with exhaust fans now installed in the chimneys, you can’t light a wood fire if it’s warmer than 55 degrees outside. A big fireplace has needs that you just have to respect. People also try to drag logs into the fire from a nearby wood cart, ignoring the signs that tell them not to — the desire to add wood to a fire evidently being equal to the desire to say something profound.

I did neither, instead occupying myself with those quotations. Like the one on the enormous rock that functions as the mantel of the south fireplace. It reads, “Take from this hearth its warmth/From this room its charm/From this Inn its amity/Return them not — but return.”