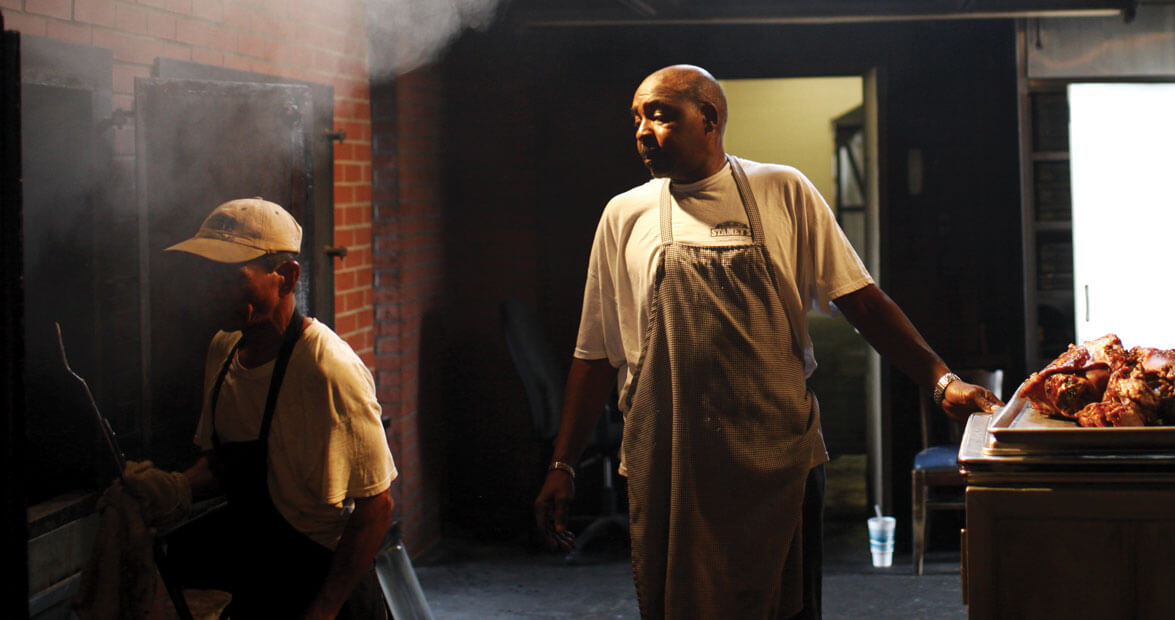 I moved to Greensboro in 1972 as a young television reporter for WFMY-TV, and in those days, you just didn’t argue about some things. Stamey’s reputation for having the best barbecue in Greensboro was one of them. At that time, the rambling, white-frame restaurant across from the Greensboro Coliseum was the end result of several remodeling projects and additions made since the original drive-in opened in 1953. Traffic on High Point Road wasn’t as heavy back then, and crowds from the Big Four and ACC basketball tournaments used to line the boulevard, waiting for breaks between oncoming cars, so they could dash across the avenue to Stamey’s between games. Occasionally, newspaper and television reporters and photographers from around the Triad shared a table at the restaurant. I can clearly remember sipping iced tea and listening to a young New York native rejoice about landing a reporting job back in North Carolina, where he had attended college. “Man, I’ve eaten barbecue and hush puppies here every day since I got back,” he exclaimed proudly.

Today, Stamey’s occupies a newer, lodge-style building, constructed on the same site in the 1980s. It’s fitting that its quarters are probably the most impressive among all the barbecue restaurants in North Carolina. Stamey’s is, after all, one of the proudest names in the business. 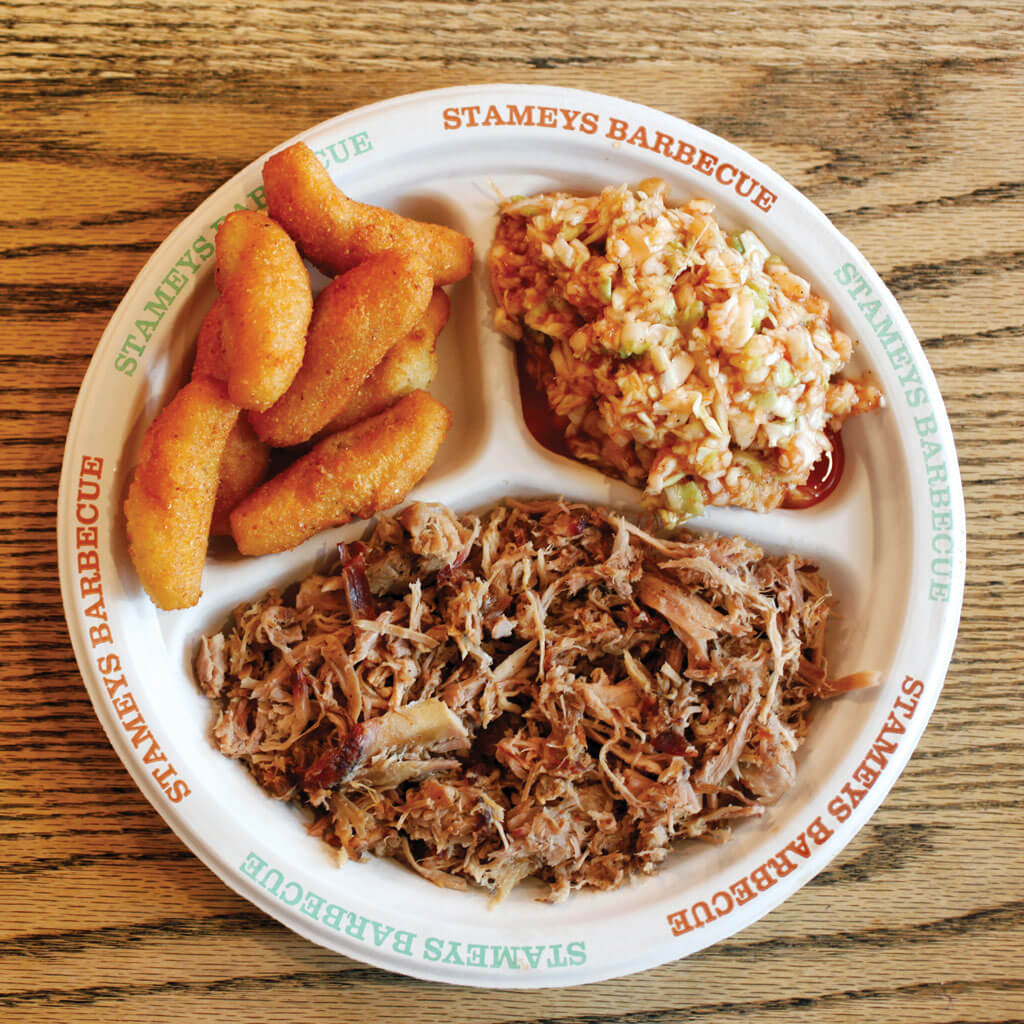 A plate of Stamey’s barbecue stacked high with pork, hushpuppies, and slaw. photograph by Travis Dove

Its founder, Warner Stamey, taught the secrets of the barbecue craft to the operators of some of the Piedmont’s best-known barbecue establishments. A portrait of Warner Stamey hangs just inside the front door of the restaurant. Not far from the portrait are two smaller black-and-white pictures that present a fascinating contrast to the polished brass, brick, and wood of the cathedral-ceilinged building. The aging photographs show the emporiums of the two men who popularized Lexington-style barbecue and taught the process of its preparation to Warner Stamey. One picture shows a semi-permanent tent set up as a barbecue stand in the 1920s by Jess Swicegood, while the other reveals a tiny cafe built a few years later by Sid Weaver, who had originally set up a barbecue tent right beside Swicegood’s just a few yards from the county courthouse in Lexington. From those humble beginnings grew dozens of restaurants across the North Carolina Piedmont, all serving the same slow-roasted, chopped-pork shoulders and tangy-sweet vinegar-and-tomato sauce perfected by Swicegood and Weaver and passed along through Warner Stamey.

The real monument to Stamey is not the restaurant, but the pit building, which is by far the largest and best equipped in the state. Warner constantly experimented with the design of the wood-fired pits used to cook pork shoulders. While the pits in early photographs were essentially open-top, rectangular boxes with metal covers that could be raised and shut, the ten pits at Stamey’s — built in the late 1960s — are basically a series of large, brick ovens forming a solid wall along each side of the rectangular building. Fireplaces for burning wood down to coals are also built into the walls. The wood is thrown into the fireplaces through an exterior door beside the woodpile, while coals are shoveled from doors inside the building and into the pits. Each pit has two steel doors — one providing access to the metal cooking racks, the other to the floors of the pits, where the hickory coals are spread twenty-four inches below the roasting shoulders. Smoke from the pits is vented through chimneys, rather than emerging directly into the pit building as it does at several establishments. Thanks to its dull red brick, its arched fireplaces, and its black steel doors, the place has the look and feel of a nineteenth-century foundry — a look of permanence and solidity perfectly matching the reputation of Warner Stamey.

A succession of employees — now mostly Vietnamese Montagnards and Cambodians — have presided over the pits for many years, drawing coals from the fireplaces with long-handled shovels; scattering them evenly beneath the meat; and, when the time is right, bending from the waist and leaning into the smoky pits to turn the heavy shoulders with three-foot forks. The pits are kept fairly hot at Stamey’s, and small shoulders are done in six hours or so. That means all the meat can be put on early in the morning, rather than having to be cooked overnight. The smaller shoulders are done in time for lunch, while the larger ones — up to around eighteen pounds — are finished early in the afternoon after nine or ten hours on the pits, in time to be prepared for the dinner crowd.