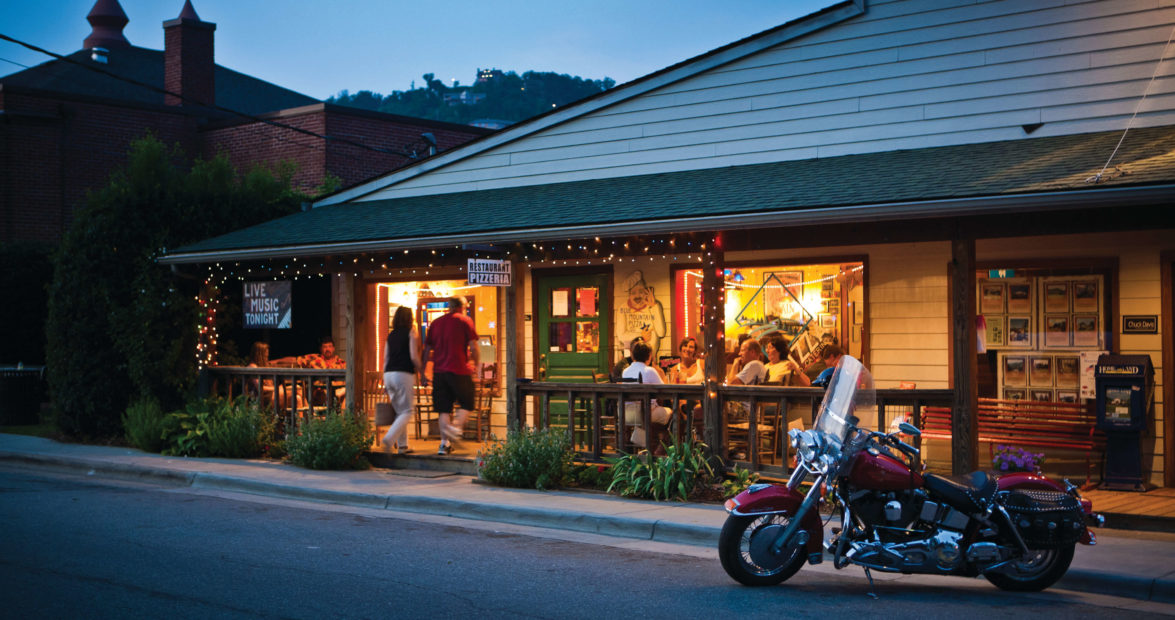 Just outside the door of Mangum Pottery, Minnie — a mutt with strong hound-dog leanings — lies curled in a patch of sun.

Ankles pass by, inches from her face. Not exactly a sentry, she barely lifts her head to sniff the air.

Inside, owners Rob and Beth Mangum are hard at work. Rob is shaping slabs of clay into the rough form of a three-tiered fountain; Beth is bringing life to the beginnings of a pitcher. An employee, Casey Dougan, stands at a nearby table, packing orders to ship. Tom Waits’s voice growls from a speaker above.

The Mangums arrived in this mountain town in 1998 and have been a steady presence ever since. Rob grew up north of Boone, in Ashe County, Beth in northern Virginia. The two met at North Carolina State University’s College of Design, did the festival circuit for several years, and by the late 1990s, started looking for a place to put down roots.

“Downtown Weaverville was pretty dead at the time,” Beth recalls. There was little in the way of retail presence on Main Street and no restaurants to speak of. “The buildings around were heating and air-conditioning supply companies and that sort of thing. You know — the kind of places where most of the business was done out the back door.”

A decade later, the five-block stretch of Main Street is home to a half-dozen cafes and restaurants, a fly-fishing outfitter, a renovator’s supply company, a spa, and a handful of craft galleries. A yoga studio sits just off the street. The old guard is still in evidence, too: the upholstery shop, the insurance agency, the car-repair shop with bluegrass music spilling from its bays. Compared to the carnival atmosphere of nearby Asheville, Weaverville’s compact downtown and quiet cross-streets — lined with dogwoods, redbuds, and bungalows — can seem, well, positively quaint.

Take, for instance, the sound of tiny feet near the front of the Mangums’ shop. A long-haired Chihuahua saunters in, apparently unaccompanied. “Well, hey there, Maggie,” Rob says. “Hi, Maggie,” Dougan adds.

Beyond the pottery’s front window is Maggie’s owner, Deb Schmid, making her daily rounds with a squeegee and bucket. A native of nearby Madison County, Schmid has made a living washing windows here for decades. “Somebody the other day said, ‘You’re awfully good at that.’ ” she says. “And I said, ‘Well I’ve been doing it for 30 years. If I can’t do it well by now, I’d just better give it up.’ ”

Her hand moves in deft, symmetric patterns. Today, she’ll wash the windows’ insides, too, in preparation for the upcoming Art Safari, a studio tour the Mangums helped start 10 years ago. Schmid peers through the glass at the thousands of dollars worth of handmade pottery — bowls, cups, fountains, grandfather clocks, and decorative platters. “I think I’ll let them move that stuff out of the way,” she says.

Up, down, and back

Weaverville saw its beginnings more than two centuries ago in 1786 when John and Elizabeth Weaver and their son, Jacob, made the trek across the mountains from eastern Tennessee, settling about a quarter-mile east of where downtown rises today. The area was once known as Dry Ridge for the fact that rainfall was spotty compared to the surrounding mountains. That distinction survives today in the names of a number of local businesses: Dry Ridge Inn, Dry Ridge Family Medicine, and the aptly named Dry Ridge Roofing company.

The town followed the classic arc of development, from agriculture to milling, timbering to textiles. By the last years of the 19th century, Weaverville was approaching its commercial zenith, home to grand hotels and places where artists, writers, and captains of industry came to recover from the dissipations of urban life. A trolley line, spurring north from Asheville, carried passengers to Main Street for the sum of 35 cents.

The building that houses Mangum Pottery is evidence of that Gilded Age boom. Built in 1905, it first served as a general mercantile store, a place where shoppers could purchase boots and dungarees, nails and canned goods. Carl Deitz — one of the Mangums’ cherished friends who died a few years ago at age 82 — remembered going there as a boy in the 1930s.

“Carl used to tell us how there was a central table down there where they put all the hardware,” Mangum says. “But at Christmas they cleared all that off and just covered the thing with toys. It was a pretty big deal.”

The Great Depression dealt a lingering blow to the region, however, and by the middle decades of the 20th century, the town had fallen into a kind of commercial torpor. The first stirrings of a revival came in the 1980s. Even by the late ’90s, though, something like a pottery studio was a bit of a hard sell here. Deitz was initially one of the doubters, one of the locals who took a well, we’ll-just-have-to-see attitude toward any new enterprise.

“But you know what?” Mangum says. “I showed up to work every morning, year in, year out. That went a long way to getting some credibility.”

Today, Main Street may not represent the town’s commercial center, a distinction that belongs to the strip malls and a handful of new big-box stores just to the west. But it may represent the town’s best impulses, a location where newfangled creativity and wireless-enabled coffee shops sit comfortably alongside more traditional enterprises. The old drug store is now the Well-Bred Bakery & Cafe; the former Bank of Weaverville — vault intact — was recently fashioned into an Aveda salon and spa. Several years ago, the old Baptist church became the local public library branch.

Decades ago, the bones of Weaverville’s former town hall and jail became home to Shope’s Furniture, one of the oldest businesses in town. The upstairs may be full of contemporary furnishings — leather club chairs, dining room tables — but downstairs, out of sight, is another world. There is an Otis elevator so old that one might be forgiven for wondering if it’s steam-powered. The old jail’s holding cell is down there, too. “It’s not really Mayberry-esque,” says owner Scott Shope with a grin. “It’s a little more like something you’d see in a dungeon.”

Shope grew up a few streets over and lived through the commercial stasis that overtook the town in the 1960s and 1970s. (His grandfather was town mayor for much of the 1960s.) He says he’s grateful for the energy that’s arrived with the town’s latter-day pioneers, with their almond scones, lotus positions, and boutique shampoos. “The pulse of the town has definitely picked up quite a bit in the past 10 years,” he says. “We’ve got influences down here now from New York, Florida, Michigan, and everywhere in between. We’ve got retired generals living here and authors and poets. They’re what I call ‘jewels in the crown’ of Weaverville.”

Restoring with a reverence

Across the street and a little farther south, the repurposing of Weaverville’s historic buildings continues. Developer Lou Accornero stands outside what was, until recently, the town’s fire department. A tape measure clatters against his pant leg as he points out favorite details of the structure: “You see those capitals? They’re almost Deco. Beautiful.” Downstairs, he places a hand against a wall reverentially. “They tell me that behind this plaster are the old hitches where they tied the horses that pulled the fire wagons. I haven’t seen them yet, but they’re gonna stay.”

Trim and tan, Accornero bought a piece of property in Weaverville back in 1964 but said there wasn’t enough opportunity at the time for him to consider raising a family here. He’s happy he was able to come back. “I was born in Manhattan, lived in Miami, and spent 20 years in New Orleans. And I’ll tell you: This is the best place yet,” he says.

Behind the station is a pile of bricks (“Seventy-two hundred of them in all,” Accornero says) salvaged from a local textile plant, now destined to become a patio and fence. The building’s doors came out of a 1930s-era home in Asheville’s Grove Park neighborhood. “They weren’t cheap,” Accornero points out. “But they’re part of the area’s history. Buildings have a soul, you know? I can almost hear this one breathing a sigh of relief that it’s getting a second chance.

“When I go back to Italy — half my family is still there — the thing that I love about it is that it’s the same place every time,” he continues. “I go to the house where my father was born, where his father was born, and we sit down and have lunch. It’s the same as ever. And Weaverville can have that same feel, if we just take the treasures that are here and fix ’em up rather than knocking them down.”

Renewal of the former Weaverville fire station, Accornero believes, should be done by fall. He imagines a brew pub here, or a restaurant, or an art gallery. Or all three. Next to one of the station’s front doors, where trucks used to dash off on emergency calls, sits the silver bulk of a stainless steel hose-dryer, half as big as a typical refrigerator.