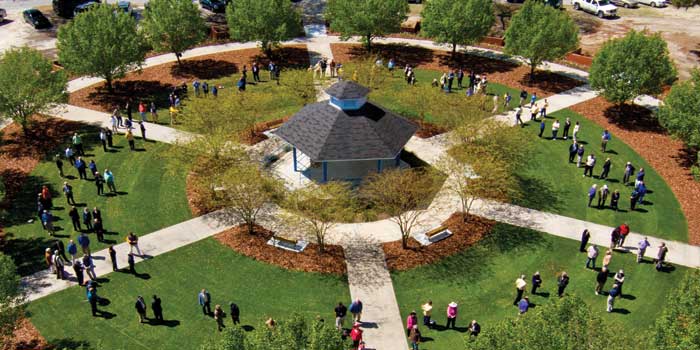 Everybody knows about Rotary.

It’s a bunch of chamber-of-commerce types hanging around, making backroom deals. It’s the old-boy network, right? Even Josh Lyman, on “The West Wing,” once dismissed another character as a big-talking Rotarian. They have signs with the big blue wheel when you drive into town. And oh, yeah, they have meetings — they’re big on meetings. And that’s Rotary: a bunch of old guys at meetings. Right?

Meet Lori Harris, an athletic, youthful ball of energy who’s been the project manager for Rotary’s yearlong renovation of a Wilmington city park. “If you could have seen this a year ago,” Harris says, shaking her head during a tour of the garden. “There was no grass,” she says, pointing to a carpet of turf you can now putt on. “No flowers in the cogs,” and she points to vibrant, healthy azaleas burgeoning along the brick wall that surrounds the garden.

Cogs? Yep. The waist-high brick wall surrounding the garden, in a little triangle of land alongside Wilmington’s leafy Greenfield Park, follows the crenulated shape of that Rotary wheel. In fact, in this little corner of park in an uncertain neighborhood south of downtown Wilmington, that crooked, brick, garden wall turns out to be the largest Rotary wheel in the world: 240 feet across, with dozens of those ratchet-looking cogs that define the wheel’s gear shape. Trees line the park; there’s a gazebo painted in bright Rotary yellow and blue, but the main thing is that wall, 754 feet around.

Harris explains. Wilmington Rotary first adopted the little park as a service project in 1945, planting and weeding. In 1965, with the help of masonry students from Williston, the city’s only high school for African-Americans, Rotary built the brick wall in the shape of the wheel. Since then, the park received a bit of attention, but it mostly languished, at best unused, at worst, a haven for drug deals. Then the North Carolina Azalea Festival organizers thought the wheel would be the perfect place for the refreshments after its 2011 ribbon cutting. “So I went to the Rotary Club,” says Gayle Ward, of the Cape Fear Garden Club, “and I said, ‘Guys, there’s company coming!’”

Rotary swung into action. Harris’s club — Wilmington’s Downtown Rotary club — worked with the city’s five other Rotary clubs for a year to turn the park from a trouble spot, where homeless people slept in the gazebo, into a spectacular garden, now frequented by neighbors and schoolchildren.

“We were almost pioneers in a Rotary effort to collaborate,” Harris says. Indeed, Harris is joined in her walk-through not only by a couple of members from her own club, but also by members of others — Stuart Benson, for example, a charter member of the Wilmington West Rotary. He’s a surveyor, and he now maintains an interactive map of every single plant, bench, and walkway the groups put up in the park. Together this year, Wilmington’s clubs transplanted trees, planted daffodils in a driving snowstorm, removed graffiti and drug paraphernalia, and repainted. “And here we are,” Harris says. “Many, many small projects later.”

You might almost say many trips around that symbolic wheel. And it keeps going. Each of Wilmington’s clubs commits to at least one meeting in the park per year. The wheel was a smash in April during the ribbon cutting and looked its blossomy best when a hired crane hoisted a photographer into the air to take a picture of it. Which brings up one problem.

“The trouble is,” says R.B. Richey, the immediate past president of the Downtown club, “you don’t know it’s a Rotary wheel until you’re in the air.”

But not knowing the garden wall is a Rotary wheel really only scratches the surface of what you don’t know about Rotary. The wheel and meetings, right? So since you’ve been to the wheel, the next place to go, obviously, is a meeting.

Harris brings you as a guest.

“Does this mean I have to wear the funny hats and ride in the scooters?” That’s the question new member Bob Calhoun asked when the Rotary invited him to join. He’s at the podium giving a new-member talk. Calhoun gets a big laugh from the hundred-plus Rotarians seated at round, white tables, lunching on salad, spaghetti, and vegetables. The meeting started with the Pledge of Allegiance, which Rotarians recite with gusto.

If you just glance around, you could get the impression that Rotary is just what Lyman of “The West Wing” made it out to be: glad-handing and networking. And in fact, that’s how it started out. Rotary was founded in 1905 by Paul Harris, a young lawyer in Chicago who yearned for the sense of small-town community he left behind. Harris convinced a few friends to begin a club. Its meetings would rotate from one member’s office to another — hence, Rotary. To avoid self-selecting for one or another occupation, the club limited itself to no more than one member of a profession. So, if a second attorney wished to join, he had to either find a club without an attorney or start a new club, which helped the organization grow. The wheel, representing civilization and movement, was a symbol almost from the start, although it didn’t grow its industrial cogs until the 1920s.

In a country of small-town men streaming to big cities and looking for connection, the organization grew. By its 1915 founding, Wilmington’s first club was the 150th Rotary, and there are now 34,000 clubs and 1.2 million members worldwide.

But a club, even the first-ever civic service club, doesn’t proliferate merely by providing opportunities to network. Service is why people join, says Stacy Ankrum, the Wilmington club president. “They say, ‘Don’t join for business, but if it happens, we won’t blame you,’” Ankrum says.

In its earliest years, the Wilmington club sponsored a drive to replace, in the words of local Rotary historian Roger Moore, “the carnival effect of strings of incandescent lights across Front Street” with a modern lighting system. It sponsored an “anti-fly campaign,” which regrettably left few traces behind, along with more quotidian efforts, such as arming 100 boys with bags in a cleanup campaign and ringing bells for The Salvation Army. In 1927 it provided braces for a crippled child, and by the 1940s Wilmington Rotary funded a bimonthly free orthopedic clinic that for decades saw more than a thousand patients a year. Service is what Rotary is about.

At the Wilmington Downtown Rotary meeting, members make presentations about current projects and hear a speaker. There’s the expected casual joking from the podium, but the meeting moves along crisply; these people meet every single week (if you don’t make 50 percent of the meetings, expect push-back), and they’re busy. The meeting ends with a recitation of the four-way test, by which Rotarians gauge all they do and say: Is it true? Is it fair? Will it build goodwill? Is it beneficial to all concerned? And finally, a shout of the word — “Rotary!” — that would drown out a cheerleading conference.

Afterward, people come up to talk. The running joke of another “West Wing” episode, written by the show’s creator, Aaron Sorkin, after Rotarians deluged him with complaints, is that Rotarians keep talking about the great things they do. Which, to be honest, is exactly what happens if you show up at a meeting asking questions. Rotary members come up to talk about having painted bookshelves at the local YMCA or raising funds with golf outings and wine tastings. Rotary sponsors the Boys and Girls Homes of North Carolina, and Rotarians are glad to tell you about that. And as pleased as they are with the work they’re doing right in their own community, Downtown Wilmington Rotarians seem proudest of their international work: Last year, they raised money for a water-treatment facility in Honduras, and this year, they sent a group to India to provide water treatment for orphanages there.

You can feel a bit overwhelmed by the earnestness — and in fact, a Rotary meeting feels like a church picnic. Rotary has no religious affiliation, and there’s no proselytizing, but man, do these people enjoy what they’re doing.

“I used to work for a fella at an explosives plant,” says Don Adkins, who will be next year’s district governor for Wilmington’s Rotary district. “And if that plant blew up, he was still going to Rotary.”

Rotarians love to tell the stories of the people who brought them in. As Elliott O’Neal sits down at the meeting, in bow tie and seersucker, he says, “I was born to be a Rotarian.” His dad, a longtime Rotarian, showed O’Neal a seven-year perfect attendance pin and said, “Son, see if you can match this.” O’Neal has matched it for 27 years.

That focus on attendance epitomizes the Rotary ethos. Just keep showing up and doing what you can do, and over time, that leads to something. Mostly, again, it’s small projects: a few thousand dollars for a scholarship, buckets on the tables collecting pocket change, a Saturday afternoon picking up trash by the side of the road, pulling weeds at the giant wheel.

Recently, looking for a new service project, Rotarians spoke to Wilmington officials and settled yet again on Williston Middle School. Wilmington officials said that while preschool, elementary school, and high school students all had advocates, middle schools seemed to be falling through the cracks.

“If nobody’s tackling it, we’d better leave it alone, too,” was the Rotarians’ first reaction, says Albert Corbett, a cheerful man who was on the Williston committee. But ultimately the Rotarians decided that if the school needed help, they needed to be there. Starting this year, Rotary began providing mentorship and financial support, working on literacy initiatives, and sponsoring student and teacher awards.

Most of all, Corbett says, school officials wanted Rotary members to use their clout to help a needy school get what it needs. “We were challenged,” Corbett says. “They said, ‘Don’t take this on unless you’re gonna stay with us.’” Corbett refrained from saying Rotary had been with Williston since at least 1961, and here they still were, many, many projects later.

As the Wilmington Downtown Rotary club heads toward its 100th anniversary in 2015, plans are beginning to take shape. A new service project? Something more in the garden? Rotary will figure it out. They’ll have a meeting.
In fact, they’ll meet you at the wheel.

Scott Huler’s articles appear in The New York Times, The Washington Post, The Philadelphia Inquirer, The Los Angeles Times, and Backpacker and Fortune magazines. He has written several books, including his most recent, On the Grid: A Plot of Land, An Average Neighborhood and the Systems that Make Our World Work. He serves as the 2011 Piedmont Laureate and lives in Raleigh with his wife and two children. Scott’s most recent story for Our State was “Southern Heirlooms” (August 2011).