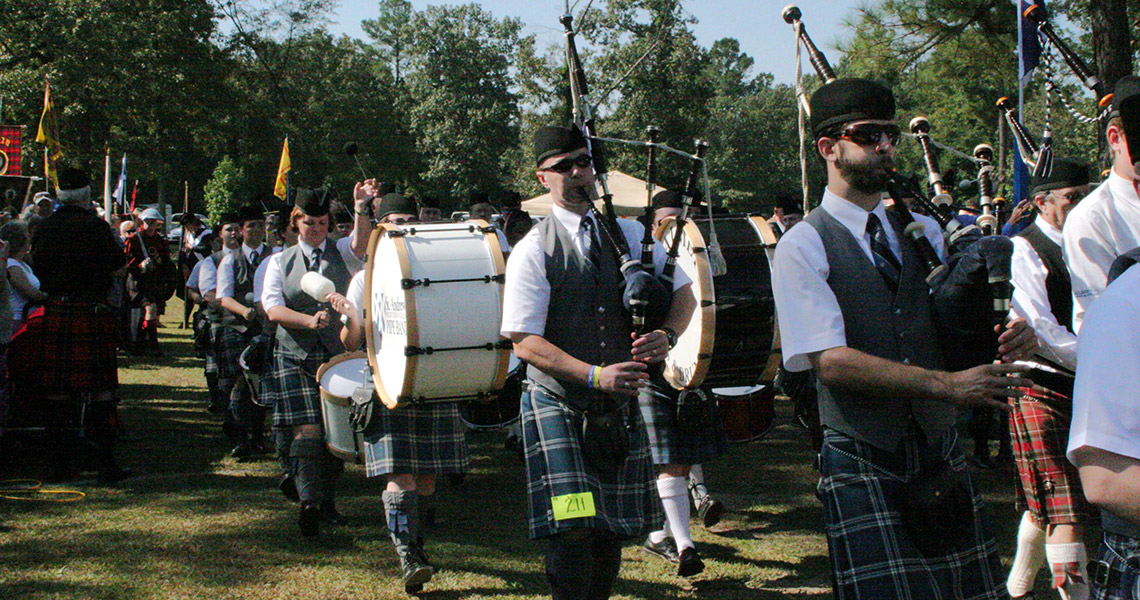 For Bill Caudill, there’s something magical about seeing dozens of pipe bands dressed in traditional Scottish kilts with their colorful tartans. Each fall, they perform at the annual Scotland County Highland Games, and each fall, the music moves him. It’s not just a nod to his cultural roots — it’s also a spectacular show.

“It’s like going to Scotland with all of the drama and pageantry, music and dance, but without the plane ticket,” Caudill says.

Scotland County provides a mix of cultures and heritage. Nowhere are these cultures more prevalent than our festivals, many of which take advantage of the fall weather. Come to Laurinburg, enjoy our festivals, and become part of our community! 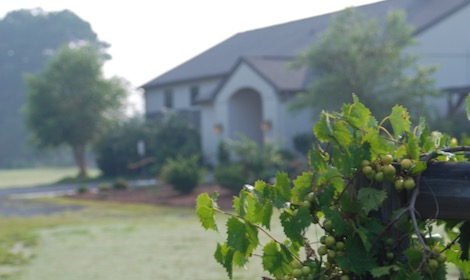 The director of The Scottish Heritage Center at St. Andrews University in Laurinburg, and founder and chairman of the Highland Games, Caudill is passionate about sharing that culture and tradition all year long — but never more so than during the first Saturday in October, when Scotland County celebrates the thousands of Scots who settled in this region starting in the early 1700s with music, dance, competitions, and more.

But the games are just one of many fall and winter events that draw crowds to Scotland County to celebrate the area’s history and heritage. Here are eight reasons you should visit when the temperatures begin to drop.

On the fourth Saturday in September, it’s common, Rev. Darrell “BJ” Gibson Jr. says, to see cars with license plates from South Carolina, Virginia, Georgia, and even Maryland parked in downtown Laurinburg. They come for Kuumba, a festival celebrating African American culture and heritage —and self-expression via crafts, music, dance, and more.

“We needed to make sure that all cultures are celebrated in our community,” says Gibson, president of the African American Heritage Committee, which has sponsored the annual festival for more than three decades, since 1990. “‘Kuumba,’ [a principle of Kwanzaa], means ‘creativity’ in Swahili — and we celebrate the creativity that is attributed to the African American culture.”

The official kick-off to Scotland County’s festival season, Kuumba features dozens of food and drink and arts and crafts vendors, and performances by musicians, dancers, marching bands, choirs, and poets. And this year, the committee has introduced an additional event: a dinner fitta, or “in white,” on Friday evening that will take guests on a chartered bus to tour local cultural sites like the Laurinburg Institute and Hallowell-Wellington Kindergarten, both historic schools for Black students, before arriving at a special location for a feast of African foods.

On Saturday, upward of 4,000 people will walk down Main Street in downtown Laurinburg and experience the sights, sounds, scents, and tastes of African culture. Gibson believes the event offers attendees an important connection to their roots.

“If you’re looking for a family-oriented celebration that teaches about the culture and the creativity of the African community, it’s worthwhile,” he says.

Scotland County was home to the largest settlement of Highland Scots in North America through the 19th century — and is now host to the biggest festival in the region. The Scotland County Highland Games features traditional Scottish athletic competitions like the Turning of the Caber, piping and drumming competitions, a Highland dance competition, and much more. 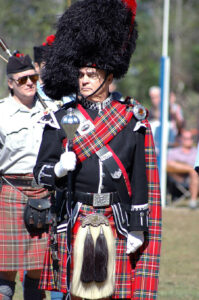 “We drew on the tradition of other Highland Games throughout the United States,” Caudill says. “Ours happens to be the one Highland Games in the state that is located in an area of historic significance.”

And the festival is expecting record numbers this year — perhaps due, in part, to the popular show Outlander, which, according to Caudill, has piqued curiosity about Scottish culture, “brought all things Scottish to the forefront,” and led Americans to want to trace their Scottish roots. The games also serve as an educational event where clan societies share information about their histories, tartans, and crests. 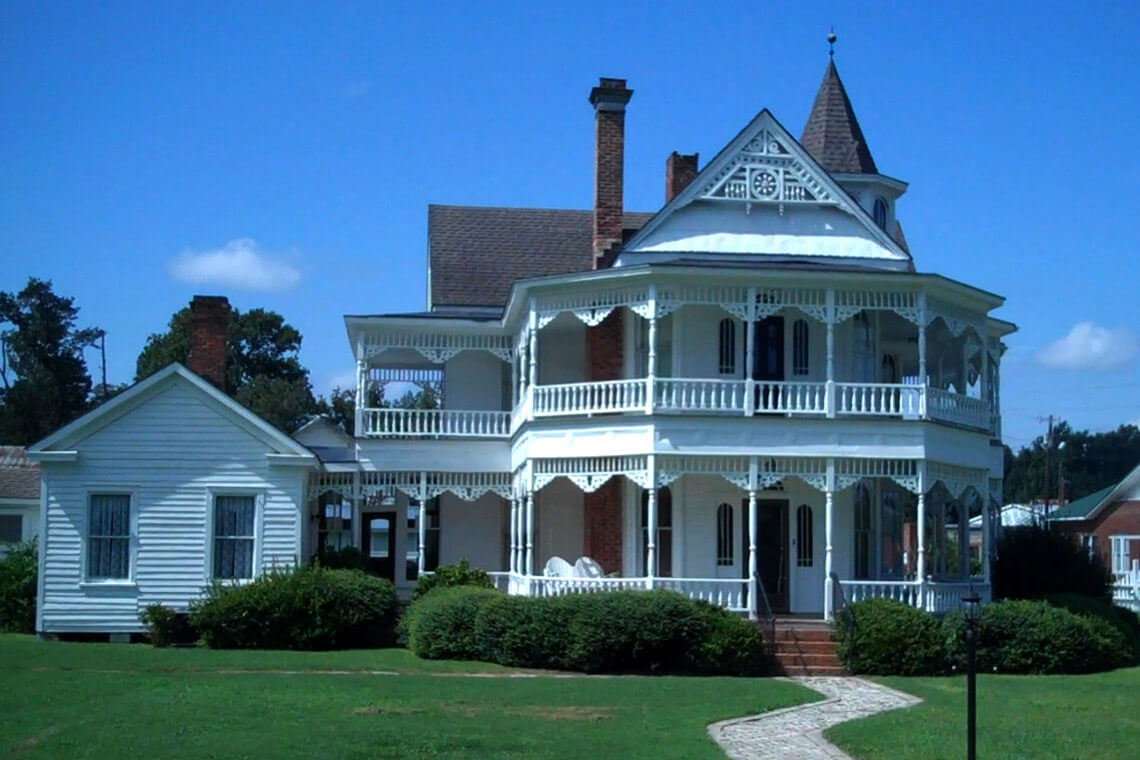 The design of the John Blue House was inspired by a riverboat. Photography courtesy of Scotland County Tourism Development Authority 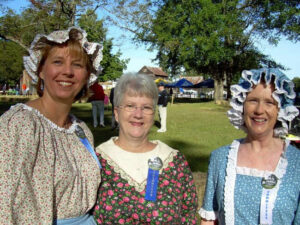 In 1891, 26 years after the Civil War, on nearly 100 acres just west of Laurinburg, cotton farmer John Blue built a gorgeous riverboat-inspired home, along with a shop where he repaired cotton gin parts and invented tools that were patented and sold to cotton farmers. The historic homeplace is now a museum, and the annual John Blue Cotton Festival is held on its grounds.

“The festival celebrates the cotton harvest,” explains festival co-organizer Clyde Marsh. “It’s a history lesson about the way life used to be in 1900.”

The first festival was held in 1982 to celebrate the history of farming in Scotland County. Forty years later, it’s still an agricultural festival complete with tours of the picturesque home and pre-1900 cabins on the property, a historic cotton gin, a tobacco curing house, and antique tractors, but the event, held on the second Saturday in October, has also grown to include live entertainment — this year will feature beach music! — hayrides, plenty of food, and old-fashioned games like jump rope, checkers, marbles, and stilt walking.

“We call it a place where yesteryear lives on,” Marsh says. 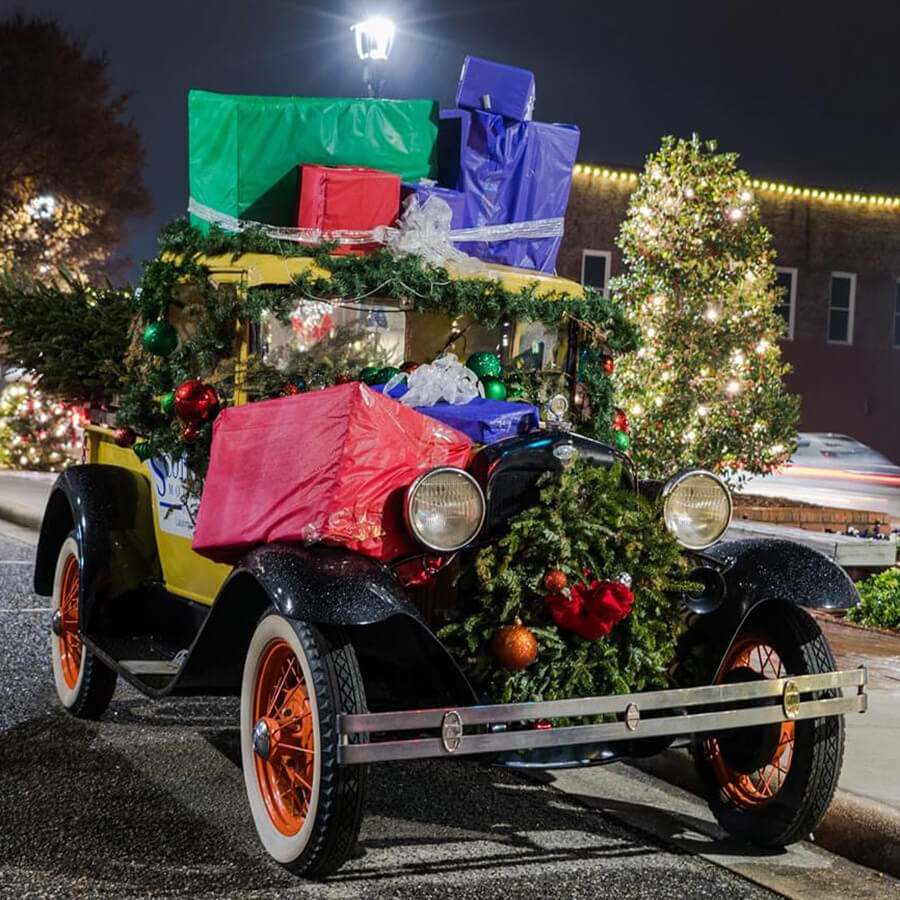 When fall festivals wrap up, holiday events take center stage as downtown Laurinburg turns into a scene from a Hallmark movie. Volunteers dressed as elves decorate 100 Christmas trees placed throughout downtown, storefronts sparkle with lights, windows display seasonal scenes, and a robust calendar of festivities — from a Christmas tree lighting and parade with dancing Santas to a singing Christmas tree — encourage visitors and locals alike to celebrate the season.

“Each year, it gets bigger and bigger,” says Terry Parker, director of ’Tis the Season Laurinburg, the nonprofit organization behind the Christmas festivities. “On Friday and Saturday nights, there are traffic jams on Main Street because people are looking at the lights and storefront windows.”

It all kicks off on November 19 with Christmas on Main, an afternoon filled with Christmas music, food, arts and crafts vendors, and downtown shops stocked with gifts. But it’s just the beginning — discover four other merry ways to get into the Christmas spirit in Scotland County.

Celebrate the reason for the season when a little bit of Bethlehem comes to Laurinburg. Local churches are collaborating to host a live, drive-through nativity scene that runs almost a mile down Railroad Street. The “tax collector” will stop each vehicle and offer directions to see seven different vignettes that tell the Christmas story.

“It’s going to be a professional production,” Parker says.

The event will also include a bazaar designed to look like a Middle Eastern town with vendors selling handmade wares.

Pose with the penguins

This holiday season, forget Rudolph: A cute colony of four-foot-tall (wooden) penguins will be calling Laurinburg home. Volunteers are transforming a lot on the corner of Main and Church streets downtown into a scene straight from the North Pole — stop and pose for a selfie with Santa’s sweet helpers, and just try not to grin. 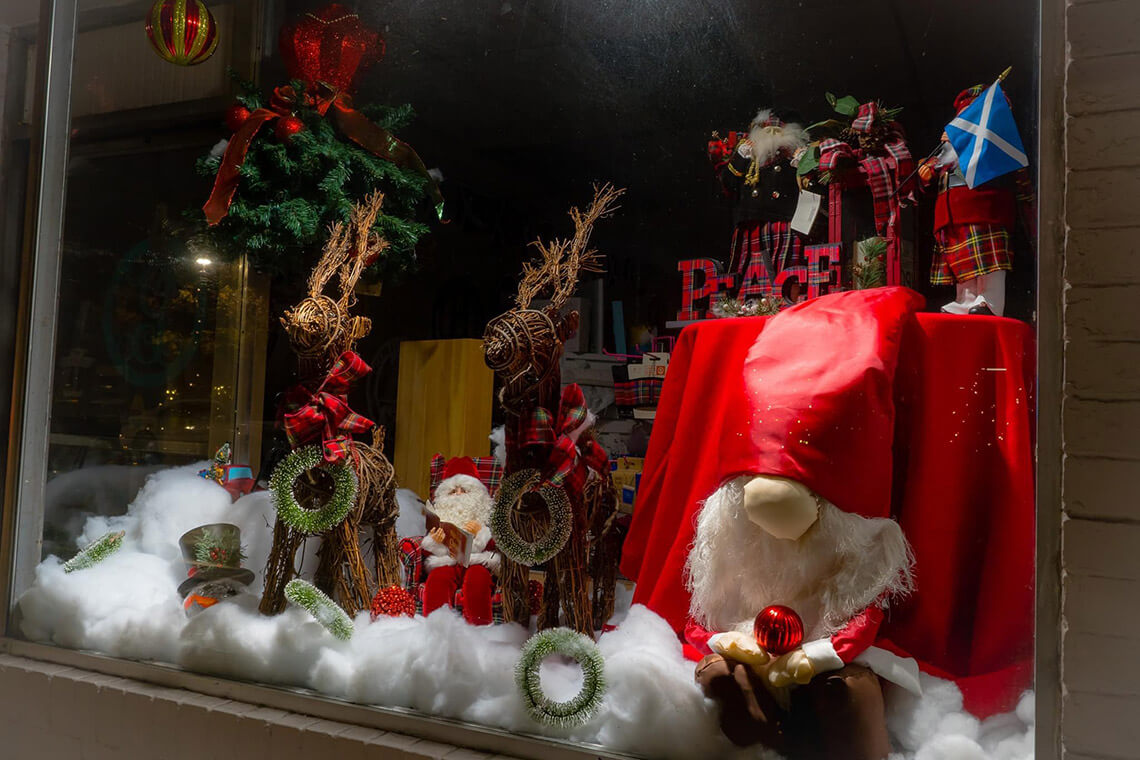 Go walking in a winter wonderland

This season, the Laurinburg Winter Land Walk makes its debut. Vignettes set up throughout the ’Tis the Season nonprofit Christmas store in downtown Laurinburg will feature different winter and holiday scenes from Candy Cane Lane. From colorful, oversized confections to a snow-covered forest of animatronic animals, multiple backdrops will provide photo opportunities — and will enthrall kids. 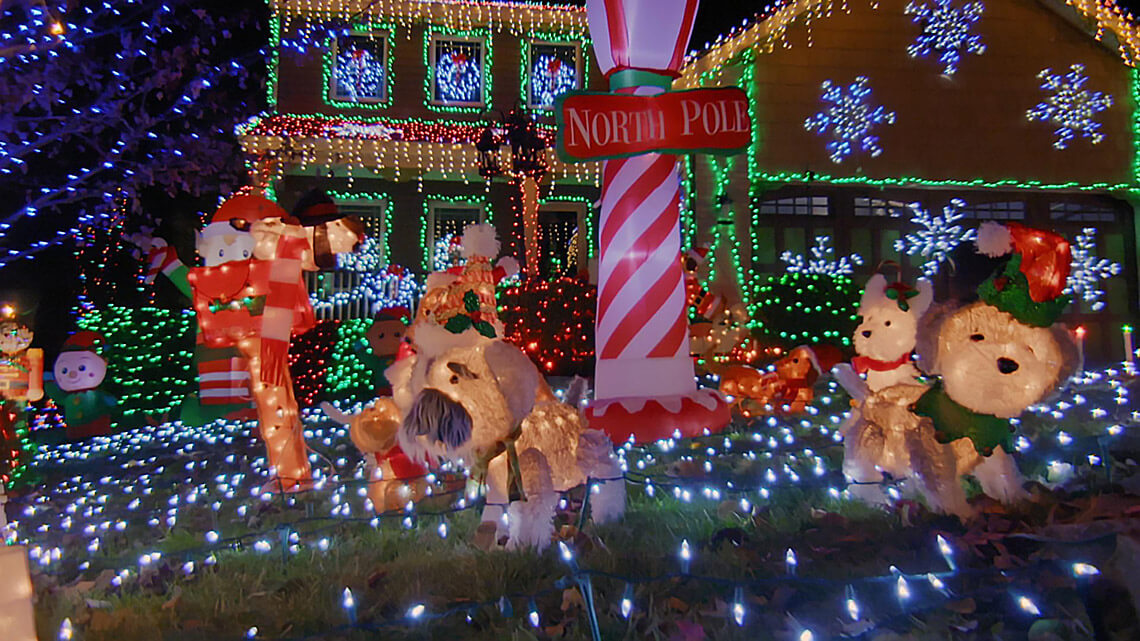 Light up the night

In past years, Laurinburg locals often traveled to bigger cities across the state to see Christmas lights — until ’Tis the Season and the Laurinburg Chamber of Commerce teamed up to host the Great Christmas Light Contest, a judged competition that features dozens of homes and neighborhoods decked out in sparkling lights. Now, entries are highlighted on a map, which can be found online, creating a spectacular light drive that locals — and now visitors — love all December long. Fill a travel mug with hot cocoa, turn up the Christmas tunes, and make the most of the holiday magic.

Be sure to check ’Tis the Season’s website as they continue to add events, including a new exhibit that is being finalized.